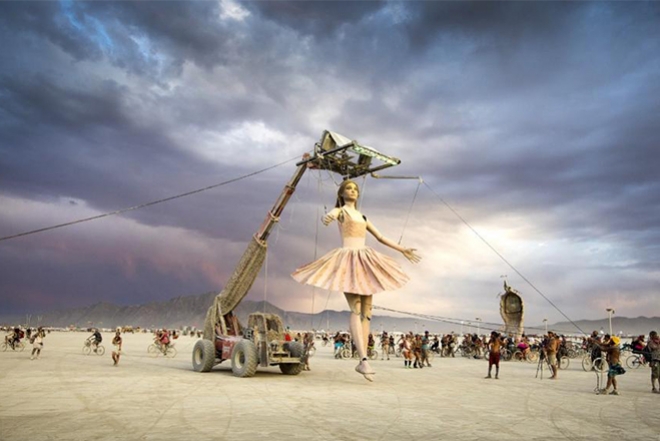 Not long after Burning Man announced that it would be launching a virtual non-profit platform called Kindling in place of its 2020 event, the trailer was shared for an upcoming Burning Man: Art on Fire documentary.

The story follows six artists who “defy reason and do whatever it takes to bring their jaw-dropping installations to the unforgiving Nevada desert.” It’s essentially a surreal look at the largest art gallery in the world (for one week a year).

“Directed by BAFTA and Grierson award-winning art film director, Gerald Fox, Burning Man: Art on Fire is a 90 minute feature-length documentary following the high-risk, unpredictable journeys of the major artists of the Burning Man as they build and deliver their monumental works in the wake of the passing of the inspirational founder, Larry Harvey. "

The preview is available exclusively via YouTube, and tells us that Art on Fire is about the connection between the arts and the flagship Nevada festival. The documentary itself will premiere on August 15 and 16 on VOD platforms, including iTunes, Amazon Prime, GooglePlay and Vimeo on Demand.

Originally scheduled from August 30 to September 7 in Nevada's Black Rock Desert, for many, the festival has been too far, too expensive and too extreme to attend. It's also notoriously hard to get tickets with more than 75,000 tickets selling out in less than 30 minutes. The 2020 physical edition was cancelled as a result of the COVID-19 but shortly after, for the first time since its inception more than three decades ago, Burning Man is going virtual and offering different experiences and digital events curated on their recently launched Kindling site. This is also giving people who have never been to the events an opportunity to explore the different elements of Burning Man’s famed culture and creative ethos. This includes virtual parties, performances, screenings and talks.