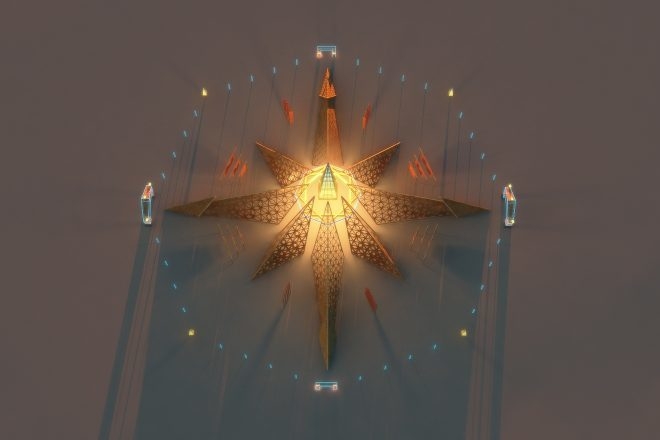 The Burning Man team has selected the 'Empyrean' temple for their 2020 iteration. The design was put forth by Colorado-based artist, Laurence "Renzo" Verbeck and Sylvia Adrienne Lisse who both perviously worked on the Temple of Direction in 2019.

The geometric eight-pointed star design taps back into Medieval Times. It represents the highest celestial point and the birthplace of fire. Participants will be able to write notes on flags that will then be lifted up on flag poles to sway in the wind as written offerings. There will be a central flame simulation as the place at which one can reach their highest connection to the cosmos. It offers reflection, resolution, release and renewal.

The interactive art piece is expected to be 200 feet in diameter and 70 feet tall with multiple paths of entry. The eight points will create canopies that will display a variation of artistic patterns.

The team have also released designs for 2020 festival's Multiverse Man Base. the design Tligns with this year's festival theme, Multiverse. which the Burning Man journal says is centered around "the quantum kaleidoscope of possibility, the infinite realities of the multiverse, and our own superpositioning as actors and observers in the cosmic Cacophony of resonant strings." 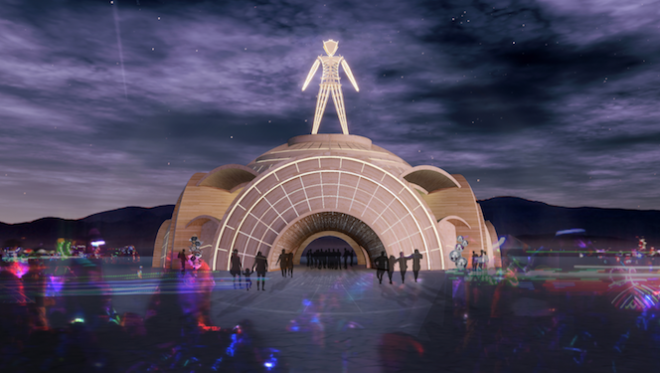 Kate Greenberg designed the Pavilion base as the intersection of five bubble universes and said of the structure: "A multiverse may be the coexistence of multiple universes separated by space, time, or dimension. We may exist in one, some, or all of these simultaneously; however, we continue to find ourselves at the center of that which we call our general reality. When we look beyond what we know about this reality, perhaps to find something larger than ourselves, we can't help but also seek to find humanity in the vastness of this expanding all."

Watch a video of the design below:

Experience this structure and see the man burn at Burning Man 2020 from August 30 to September 7 in Black Rock City, Nevada.