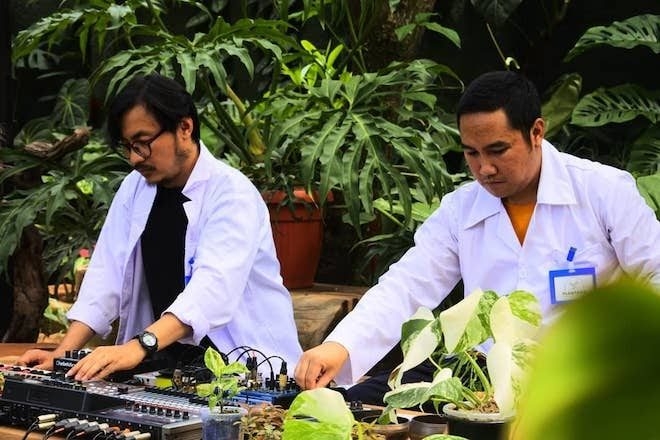 Indonesian electronic duo Bottlesmoker has announced their fifth album ‘Konser Plantasia’ on Instagram, scheduled for July 30. Prior to this release, the pair have been performing live in a country where live performances are banned due to COVID restrictions. They didn’t break any rules, though. The restrictions are in place to prevent large numbers of people from getting together. But Bottlesmoker’s audiences were plants.

A video of one of their performances was uploaded on YouTube last year.

While it isn’t totally clear what the album ‘Konser Plantasia’ will contain, the album follows a year or so of touring by the duo as they serenaded leafy vegetation in venues around the country. The series of concerts — which ended in April this year — were titled Plantasia: Concert For Your Plants, and were livestreamed for paying human audiences. The announcement post on their Instagram features a woman swimming among lily pads. One might expect that the album could feature some of the plant-healing music produced for these concerts, but they might be new recordings altogether.

The live performances weren’t halfhearted gimmicks by the way. The boys of Bottlesmoker apparently did their homework about the science of serenading vegetation to improve plants’ health. According to the description of an excerpt of a performance on their YouTube channel, they adjusted frequencies and used specific repeating melodies to achieve maximum plant happiness.

"We have probed deeply some of the research about music effects to plants and refined them into one music composition that improves plants’ growth," they said. "The component of classic music, string element, evade low frequencies, melodies repetitive, tuning 423hz to an audio frequency of 5000hz became choices to be heard ahead of plants audiences."

"But not only that, but we also took on a history of Indonesian culture that has a special connection to rice plants, such as the sound of Karinding which can rid vermin to the Tarawangsa which is used in the rituals toward Dewi Sri as the goddess of rice."

The performances were inspired by Mort Garson’s 1976 album ‘Mother Earth’s Plantasia’, and were focused on rice plants tied to Indonesian culture.

Bottlesmoker is a music project made up of Anggung Suherman (Angkuy) and Ryan Nobie Adzani, from Bandung, Indonesia. The duo has been active since 2006 when they began working on experimental electronic pop and instrumental indietronica music, a genre that was still a rarity at the time in the region.

‘Konser Plantasia’ will be the pair's fifth album following a collaboration with Stars and Rabbit in 2020 titled ‘Pieces That Fit’, and Bottlesmoker’s 2017 album ‘Parakosmos’.

‘Konser Plantasia’ is scheduled for release on July 30. Connect with Bottlesmoker here.