Blackout Agency brings back their formidable curation of events for Singapore after a two and half year, pandemic-induced hiatus.

Leading the line-up for the revival event on Saturday, 6, August, is Studio Barnhus co-founder Kornél Kovács, who will be followed by British house and techno don, Radio Slave, for a second round of Ritual two weeks later on Friday, 19, August.

The relaunch of Ritual also kicks off its new residency at IKI — a Japanese restaurant known as Ikigai Izakaya by day — that converts into a sweet club setting for house and techno purveyors at night. Located on the edge of Boat Quay along the Singapore river, the space has been reinvented over the years as Mad Monks, Home Club or more recently as Canvas, where during its time as a club, the space played host to the likes of Modeselektor, DJ Bone, Answer Code Request, Roni Size, LTJ Bukem, Goldie, DJ Craze and Roy Davis Jr.

Adding to the heavyweight history, the upcoming Ritual 015 and 016 events happen to mark the first return to Asia for both artists — Swedish-Hungarian DJ and producer Kornél Kovács’ last gig in Asia still gets talked about today, when he played for UNKNWN’s fiesta in Las Casas Quezon City, in the Philippines. Radio Slave aka Matt Edwards is Rekids co-founder and globally renowned techno DJ & producer, last touched Asia when Krunk toured him across India for shows in Bangalore, Delhi and Mumbai, in March 2020. 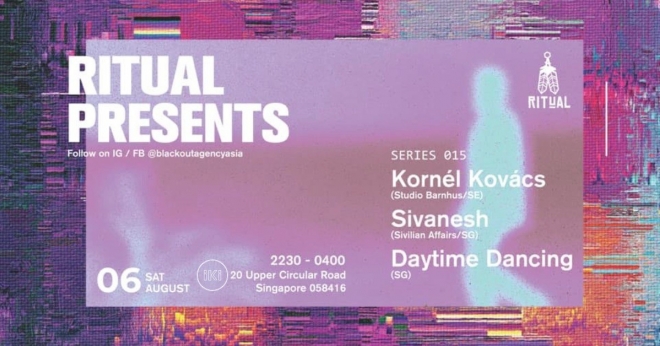 While sonically appealing to various ends of the electronic spectrum, where Kornél Kovács would ofer a more dreamy and subdued sound with high-groove-fidelity, whilst Radio Slave offers a reportoire of pulsating and muscular house and techno, where any of his surprising remixes for Kylie Minogie or Sailor & I would add to the welcomed curveballs of a good night spent on the dance floor.

Blackout Agency has been one of Singapore’s forefront promoters who started out in the basement of the now defunct Kyo, and eventually involved from a popular club night into a pop up series that took over rooftops, carparks, private villas in the middle of Singapore’s CBD as well as The Great Escape and the iconic Substation. They’ve been responsible for touring and hosting &Me, Culoe De Song, Eric Volta, Tim Sweeney, Chida, Orpheu the Wizard & Perel, amongst plenty other artists.

Tickets for August 6 with Kornél Kovács, who will be joined by local selectors Sivanesh (Sivillian Affairs) and Daytime Dancing, are available here.