As an avid photographer who shows up at raves and after-hours with anything from a couple of rolls of Cinestill 800t to some red cellophane paper, and maybe an extra lens tucked in my tiny bag of essentials, my peripheral has mostly been Hong Kong after dark. That spurred me to go on a hunt to find out what my like-minded neighbours are documenting across Asia; are they after the same dark corner action, the blurred-in-motion, the subdued human ecstasy as I am?

My late-night online musings helped me discover Chengdu-based photographer Tao Yun. Her work has predominantly involved the infamous underground abode known as .TAG Club, and, as per my affinity for all things analogue, her work glorified the gritty, intimate, and sometimes chaotic style of the night after dark captures I seek for too.

We got acquainted, over fiber optic communication of course, and I got to learn that one of her inspirations is Nan Goldin, an American photographer who led the exploration of LGBT subcultures in the 80s; her chronicles of drug-infused life in the after-hours were considered hardcore, raw and unforgiving.

So it’s no surprise that when looking at Tao’s work, I was reminded of my moments as that observer sitting in the corner of the club, resting my sore legs from quietly documenting every sweaty intimate moment happening on the dance floor. Mind you, I’m only quiet in the club when my lens is the one making connections.

Photographer, party promoter and also a DJ, Tao Yun is a member of Chengdu-based local record label 'Morning 早上好' and a member of a band called STOLEN 秘密行动.

Since 2016, she has been capturing the Sichuan capital city’s rich club subculture on camera at infamous venues and live houses — namely .TAG Club; once in a while, she’ll step off the dance floor and into the DJ booth to play a few of her favourite records.

Take a look at Chengdu’s underground scene through the eyes of Tao Yun, plus some pro tips from the talented photographer on how to enjoy yourself in the capital city of Sichuan — one of the most piquant regions on the planet.

Hi Tao Yun, can you tell our readers a bit about yourself?
Hi Adrianna. So, I’m Tao Yun and I currently live in Chengdu. I’m a member of Chengdu's local label ‘Morning早上好’ and we do events like 春游音乐节 Chun You Festival. I am also a member of a band called STOLEN 秘密行动, a photographer for several clubs and live houses, such as .TAG Club, and I also DJ once in a while.

When did you discover your love for photography and do you consider growing it into a profession?
It was in University, when I was introduced to Nan Goldin by my photography teacher; I was immediately blown away by her images! Her work made me fall in love with photography and essentially what got me shooting at clubs, parties, and for live bands. I hope I will have a chance to do more in fashion in the future.

When did you start photographing in clubs?
I began taking photos in clubs in 2016. But before that, I would go to clubs to observe the way people dance, and it made me feel good capturing all these amazing moments with my camera. Now, I have become close friends with some of the people who used to always appear in my photos; I consider those as lovely moments that keep me going.

Can you tell us about a moment you captured in a club that still captivates you today?
Definitely! The most memorable moment was at .TAG Club five years ago. Bell Towers was the guest DJ of the night and the vibe was amazing — when the night was hitting peak time, someone took out a rainbow flag, stood under the fan… the rainbow was flowing with the wind, and everything seemed so natural and harmonised. The track that was playing was ‘王菲-梦中人’ / ‘Dreams’ by Faye Wong; the whole dance floor was universally enjoying that feeling the same way I was.

Which are your three favourite tunes at the moment?
DMX Krew ‘Come To Me’
t-woc ‘Bum Nuites’
Faye Wong ‘王菲-你快乐所以我快乐’ (You Are Happy, So Am I) 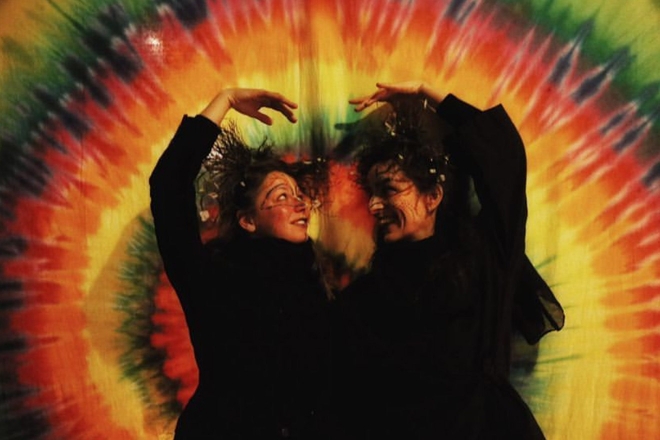 Can you tell us a story behind one of your photos?
This photo was the last photo I took with my camera before the pandemic. We had brought over French duo Chän Chän to Chengdu to perform, and this was the last time we got to see friends from other parts of the world. The pandemic separated us from friends from all over the world, and we hope to get rid of this haze soon and return to normal life as soon as possible.

Do you feel there is a connection between Nan Goldin’s works from the 80s and your captures of Chengdu nightlife today?
Absolutely. When I started seeing Chengdu’s underground scene through my lens, it really felt like a scene in my dreams. I felt like I was in Nan Goldin’s pictures. I guess the personal difference is that, for the most part, I only got to see most of the people in the scene after dark; most live very different lives during the day.

What kind of emotions do you intend to capture from a party?
I’m easily drawn to love and intimacy, at parties.

If you could capture any person on film, who would it be?
New Order! I would love to shoot them, just like in one of their classic shots.

What are the best and worst things about Chengdu’s music scene?
Chengdu has a really great atmosphere, but it’s also very niche, so I hope more people will join and grow the music scene.

Describe Chengdu’s club scene to someone who has never been? What would you recommend?
Chengdu has one of the richest nightlife scenes in China; it’s an inclusive, chill city. Whether you enjoy a fancy club or a niche underground vibe, you can always find a suitable place for you to enjoy the night. The most famous of these is the Poly Centre Building, which until 2017 was the most notorious entertainment building in China, attracting nightlife lovers from all over the world.

All 21 floors of the building were filled with a variety of bars and clubs. It was the craziest era for us in Chengdu. But after 2017, only one club remained in Poly Centre — .TAG Club. If you arrive in Chengdu now, I suggest you take a taxi directly to Kehua North Road, where there are many underground bars and clubs, such as 方糖 Fangtang, Cue, Hakka院吧 Hakka Courtyard, 一同唱片店 Tongyi Record Store, Chengdu Community Radio, and .TAG Club.

Take us on a night out kind of night out in Chengdu. Where would we start, and where and when would we finish?
It gets cold in the winters, but even when it’s hot during the summers, we always ‘warm up’ in Chengdu.

When you step out into Chengdu at night, I suggest you first get ‘warmed up’ at the Drunken Gas Station in Cape of Good Hope Square (Hongxi Garden) — I often bump into friends at the start of the night here, so it works out well for me!

Next, jump in a taxi directly to Kehua North Road, which is where Chengdu’s underground really takes form. You’ll find .TAG Club, Funky Town, and Cue are the three most famous spots in the area. When you reach North Kehua Road, start with Funky Town, which is at street level and caters to Chengdu's underground youth. Shoot down two glasses of plum wine before you then set off to Cue Club across the street. Diversity is the most attractive thing about the club, and this is where you’ll get to experience the quirky and queer side of Chengdu. The last stop has to be .TAG Club, on the 21st floor of the Poly Center Building. It can’t be anything else but the pinnacle of your night.

Your go-to hangover food?
A really hearty bowl of chicken soup with rice (Yes, the rice is in the soup, and no, it’s not congee!)