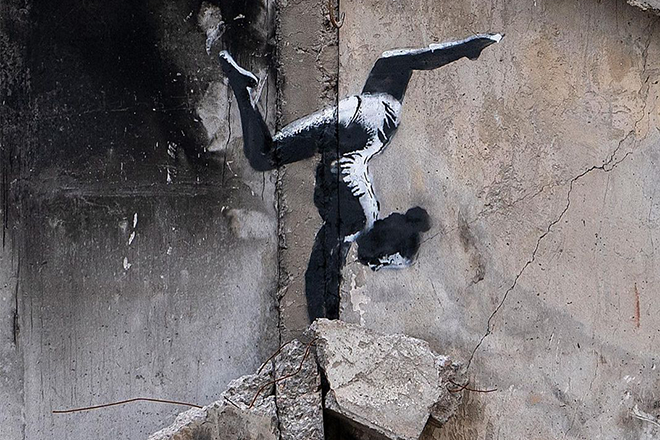 Banksy has confirmed that he is behind seven new murals in various locations across Ukraine.

His art has appeared in areas including the town of Borodyanka, the country’s capital Kyiv, and its suburb of Irpin – which are some of the areas that have been most affected by Russia’s invasion.

Rumours had begun to spread that Banksy was in the country, after works resembling his signature black-and-white stencilled style were spotted and shared on social media last week. The anonymous artist has now confirmed that he was behind the murals, posting on Instagram.

Read this next: How Ukrainian clubs and collective are aiding the war effort

One piece that was spotted showed what appears to be a woman in a dressing gown standing next to a burnt out window, brandishing a fire extinguisher and wearing a gas mask covering her face.

Another shows a gymnast doing a handstand on top of some rubble on the side of a bombed building, while a third shows a fully grown man being thrown to the floor by a young boy, with both in martial arts uniform. Russian President Vladimir Putin had an honorary black belt given to him this year by World Taekwondo revoked this year, although no connection has been confirmed by the artist.

Read this next: Banksy brings the streets into the art gallery in Taipei

The martial arts mural appeared in Borodyanka, a town about 30 miles north of Kyiv. It was one of the hardest hit areas by war, with the BBC reporting that it had experienced some of the worst shelling in the whole country.

One of the artworks confirmed depicted a dancer performing with a ribbon above a hole on the side of a building in Irpin. In May 2022, it emerged that hundreds of civilians had been massacred by Russian invading forces.