It’s a glorious time for graffiti in Taiwan. There are lots of legal walls for artists to paint. There are great outdoor areas with tons of art in Ximending as well as other parts of the country. Some graffiti artists have gotten off the streets and started boutiques or sell limited-edition merch to excitable buyers. This is why the most popular street artist in the world, Banksy, is having an exhibition.

As soon as visitors enter the oversized rooms of Chiang Kai-shek Memorial Hall, which is hosting the I Love Banksy exhibit until April 5 2021, they are told to be quiet, with signs as well as guards shushing people. The absurdity of these actions is compounded near the entrance of the exhibition when someone somewhere in a room deep in the corridors is belting out karaoke tunes like no one is listening.

Instead of being forced to listen to an old security guard singing Taiwanese hits of yesteryear, we decided to pair up Banksy’s best works that are on exhibit with the songs that they remind us of. 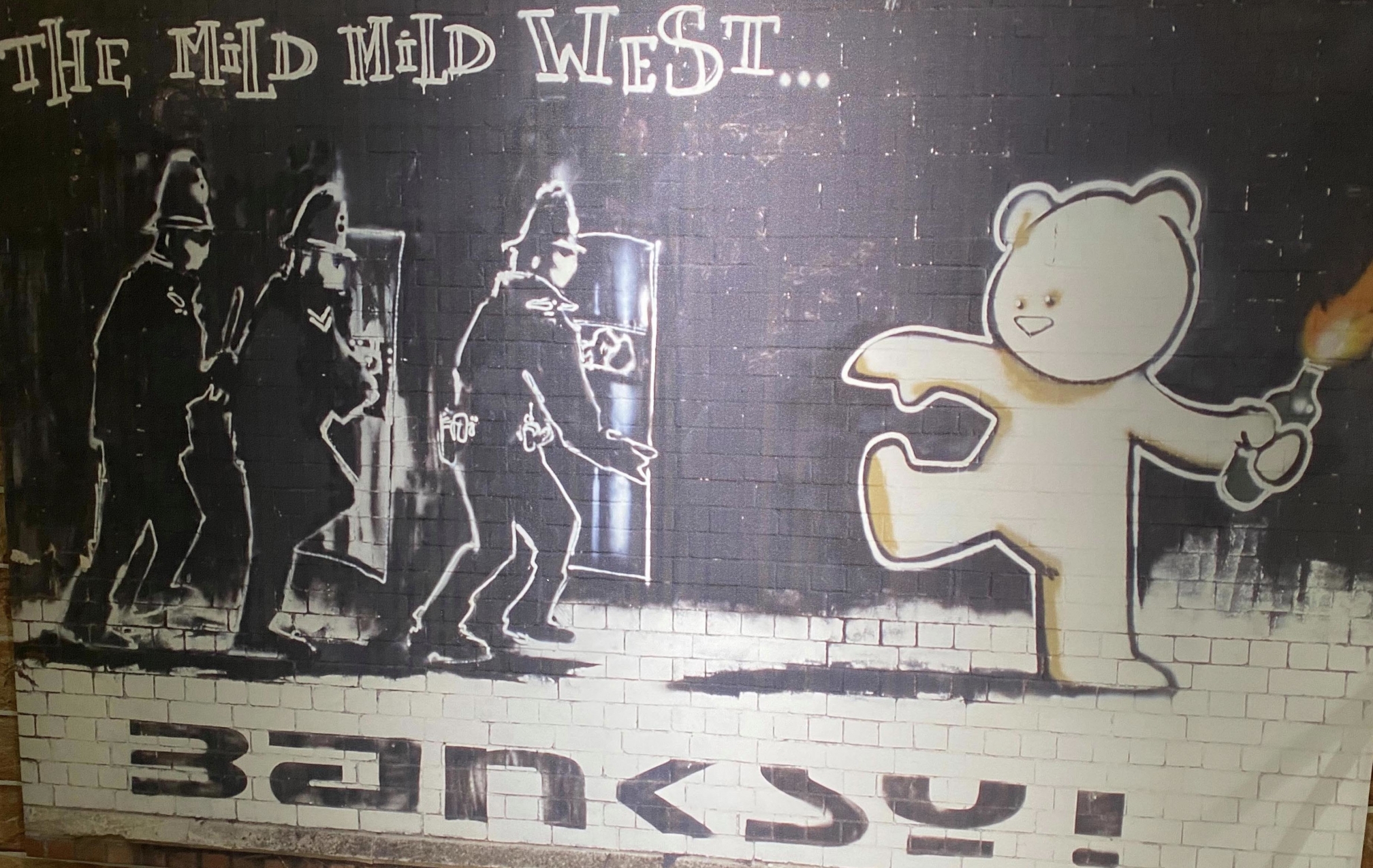 The first Banksy to garner a lot of attention is not the pseudonymous artist’s best work, but it gave the public their first taste of the anti-establishment art that Banksy would become famous for. The Mild Mild West was made in 1999 in response to riot police attacking the attendees of illegal raves around his hometown of Bristol, England.

From the get-go, Banksy has always claimed his anonymity is the key to his success because spray painting is illegal. This in turn brought him more attention, and various people and groups have been accused of being Banksy over the years. One of those is Robert Del Naja, lead singer and producer for Massive Attack, who is a visual artist as well. While Del Naja claims he’s not Banksy, Goldie once slipped up in an interview talking about Banksy and called him Rob.

‘Teardrop’ is one of Massive Attack’s biggest songs from their most commercially successful albums. 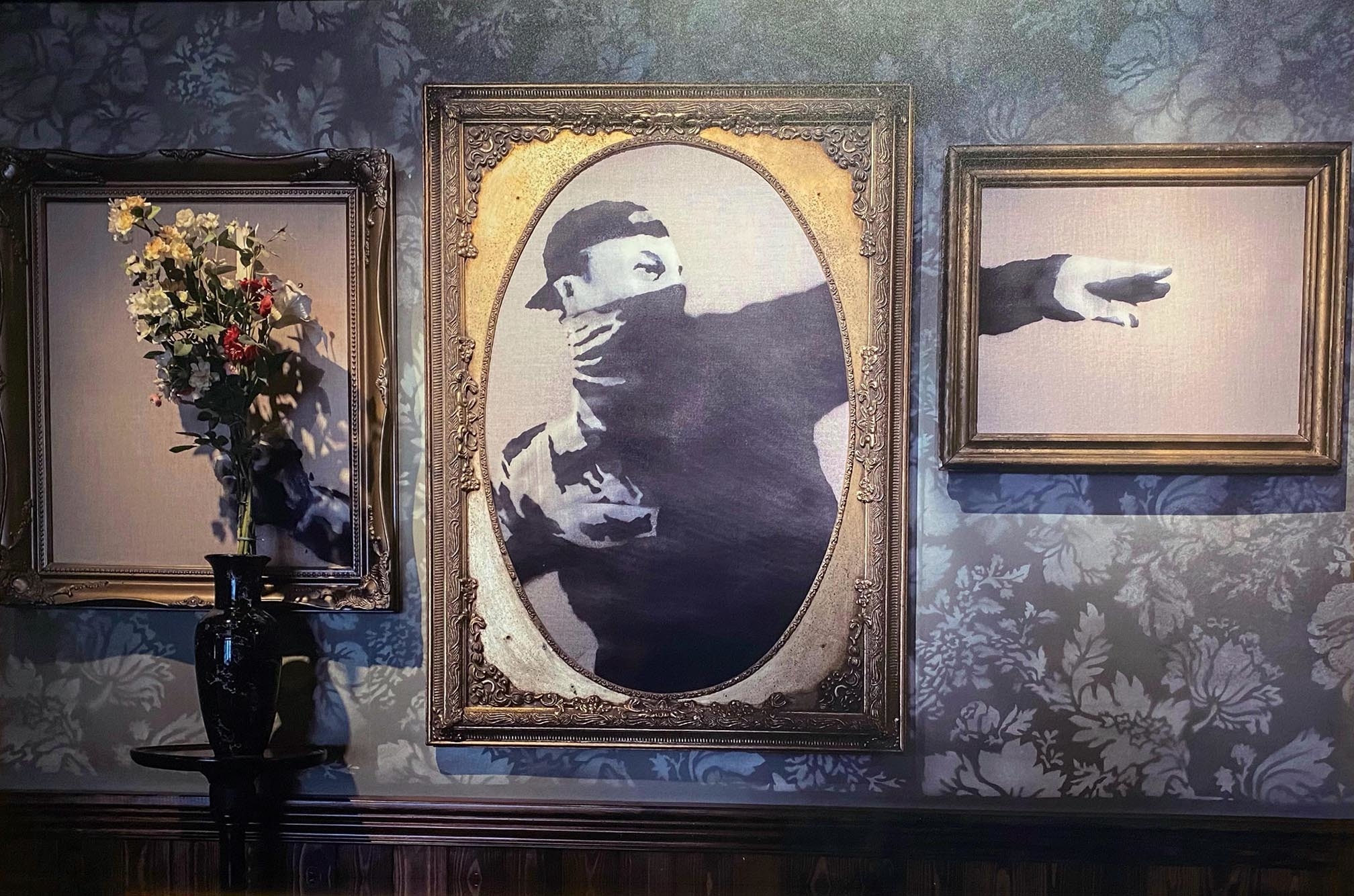 Also known as Love is in the Air, this 2003 painting depicts a Palestinian protestor throwing a bouquet instead of a Molotov cocktail. Painted in black and white except for the flowers that are colored in on the side of a car dealership in Jerusalem, Banksy has frequently called Palestine 'the world’s largest open prison.'

This classic disco track, ‘Love is in the Air’ by John Paul Young, not only shares the same name as Banksy’s art, but it also carries with it the same hope that people can eventually get along without war and violence. 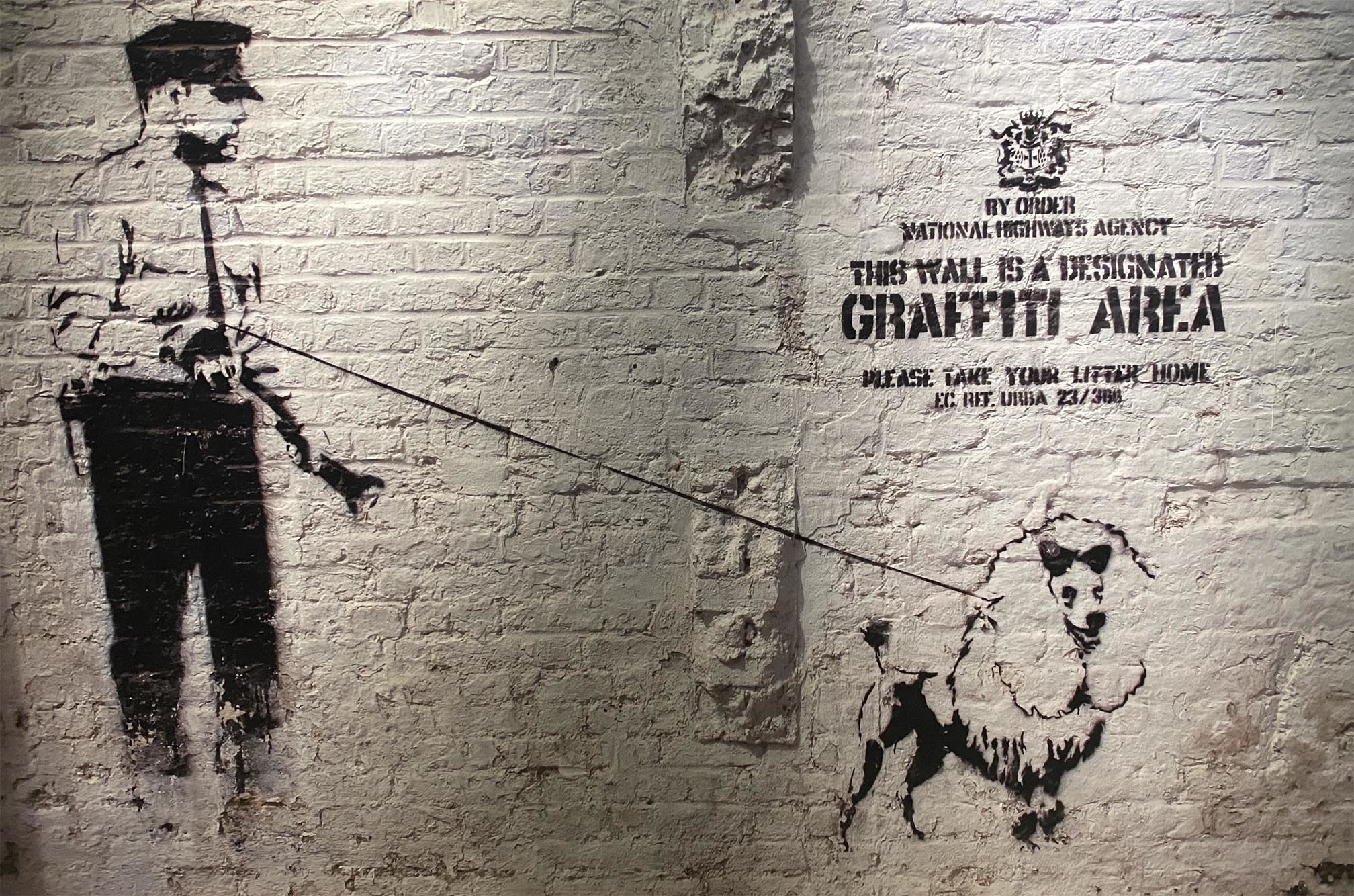 The police are deeply unpopular in Banksy’s art for sure. They flick people off. They unknowingly make out with other officers. They even stop and search innocent little girls like Dorthy from The Wizard of Oz. In Designated Graffiti Area, the police officer is in charge of the one place that vandals can go and have their way with walls, all the while taking care of his fancy poodle. The irony of this art is that it’s the only piece protected by perspex in the middle of the East End in Shoreditch, an ever-changing street art fantasy land.

2020 showed on computer and TV screens around the world what many rappers and artists have been saying about police for years. F*&k ‘em! Right, J. Dilla?. 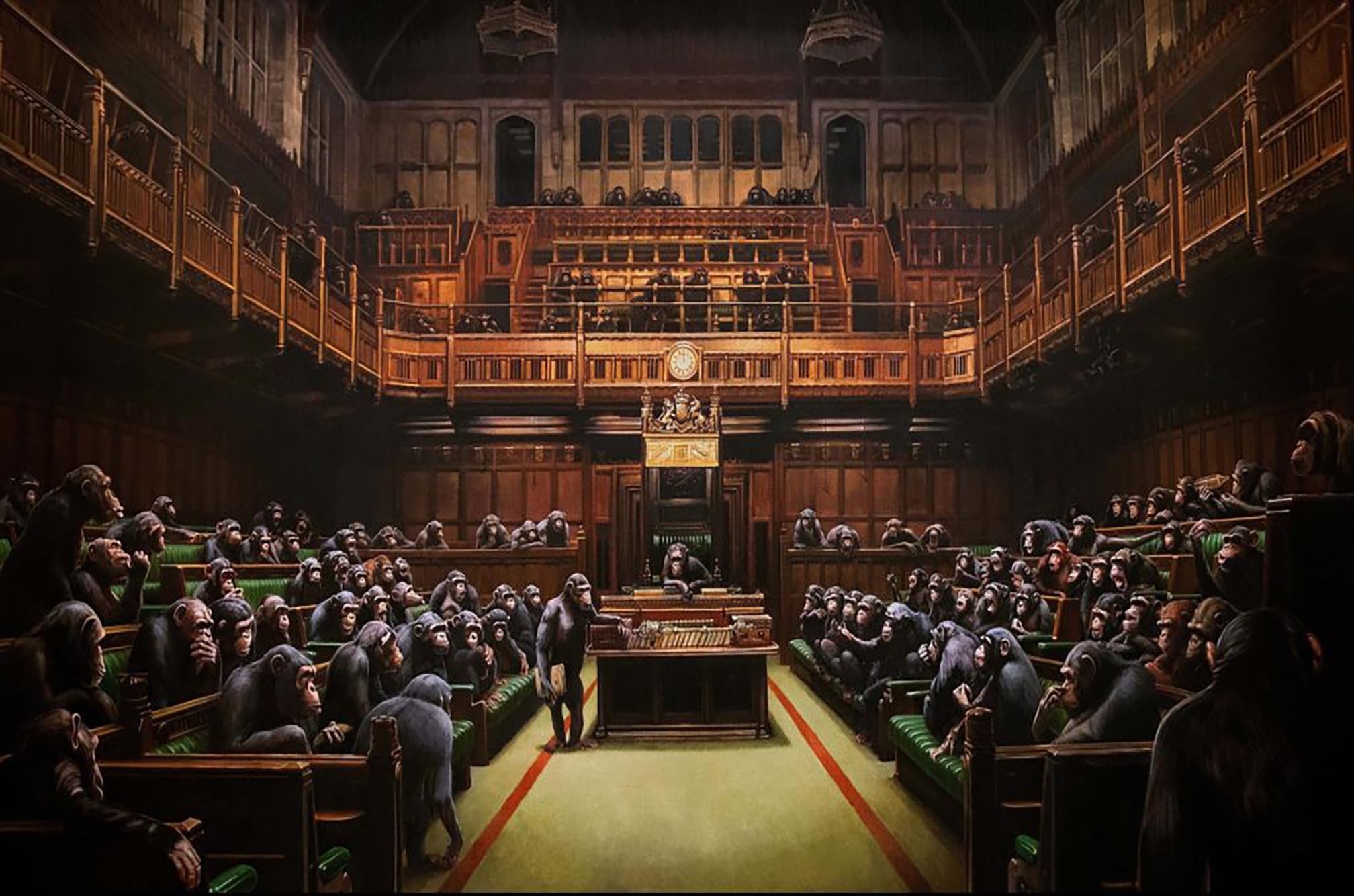 Many years ago, Banksy crowbarred his way into the art world by kicking in the gallery doors, wearing a monkey mask, holding a spray paint can and a worn-out stencil, and bringing street art into the mainstream despite the overabundance of naysayers. In 2019, Devolved Parliament, a tribute to the general chaos and nonsense that happens in government in England, sold for nearly US$13.5 million, the highest of his career. On Instagram after the sale, Banksy stated, “Shame I still didn’t own it.”

The convivial collaboration between DJ Shadow and Run the Jewels, ‘Nobody Speak,’ could be a continuation of the painting. 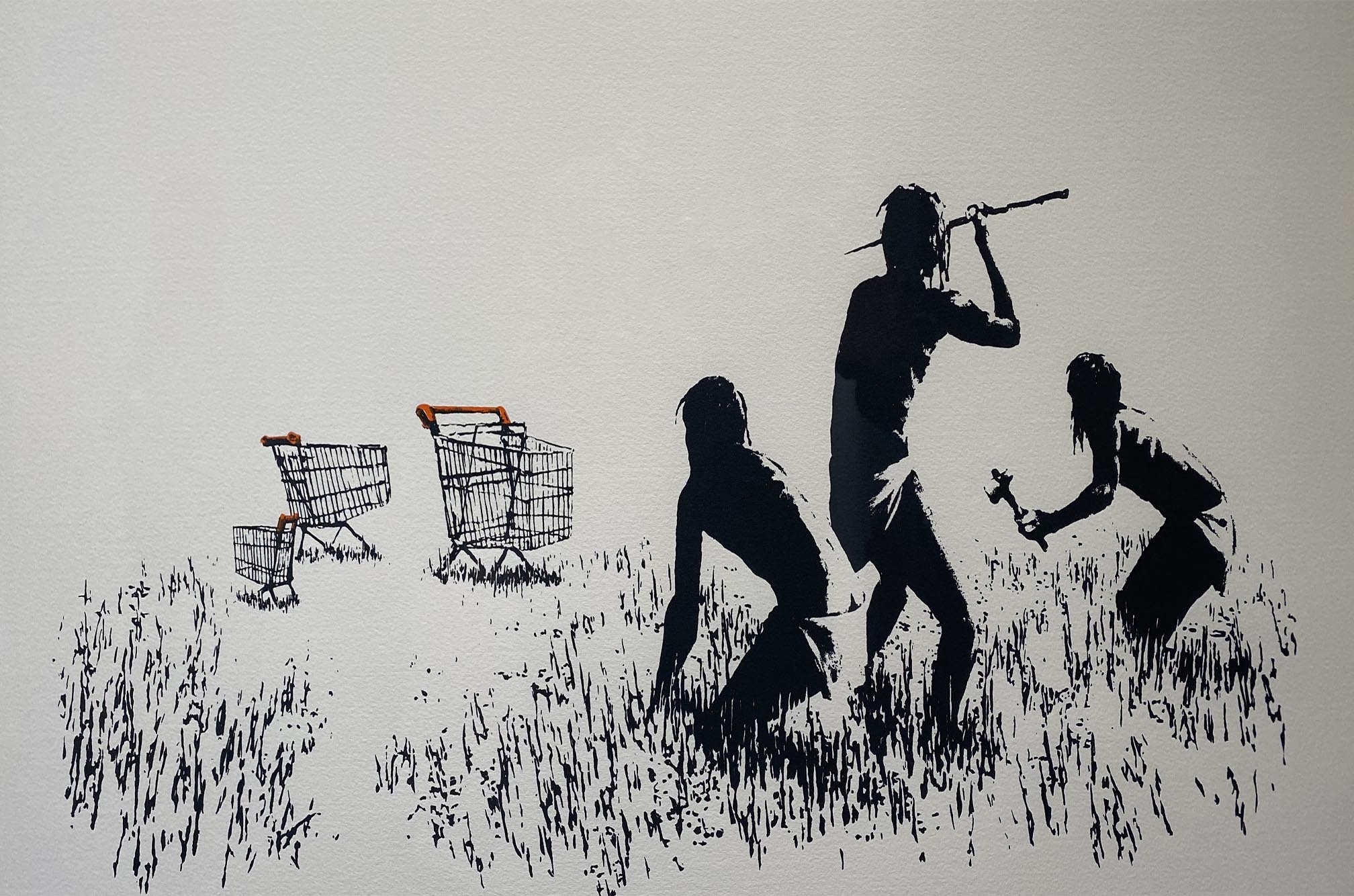 Controversy seems to follow Bansky wherever he goes or even when he doesn’t go somewhere. In 2018, Banksy’s former manager assembled what he called the largest exhibition of Banksy pieces for a show in Toronto. Problem was, Bansky didn’t authorize the exhibition and things started to get weird. A few days before the show, a person broke into the building and stole a print of Trolly Hunters worth US$35,000 and was never heard from again. Was it Banksy? Was it someone doing his dirty work? Police still have not solved the case.

While the crook didn’t get caught, maybe the real crook did. Just like in Jane’s Addicition’s ‘Been Caught Stealing.’ 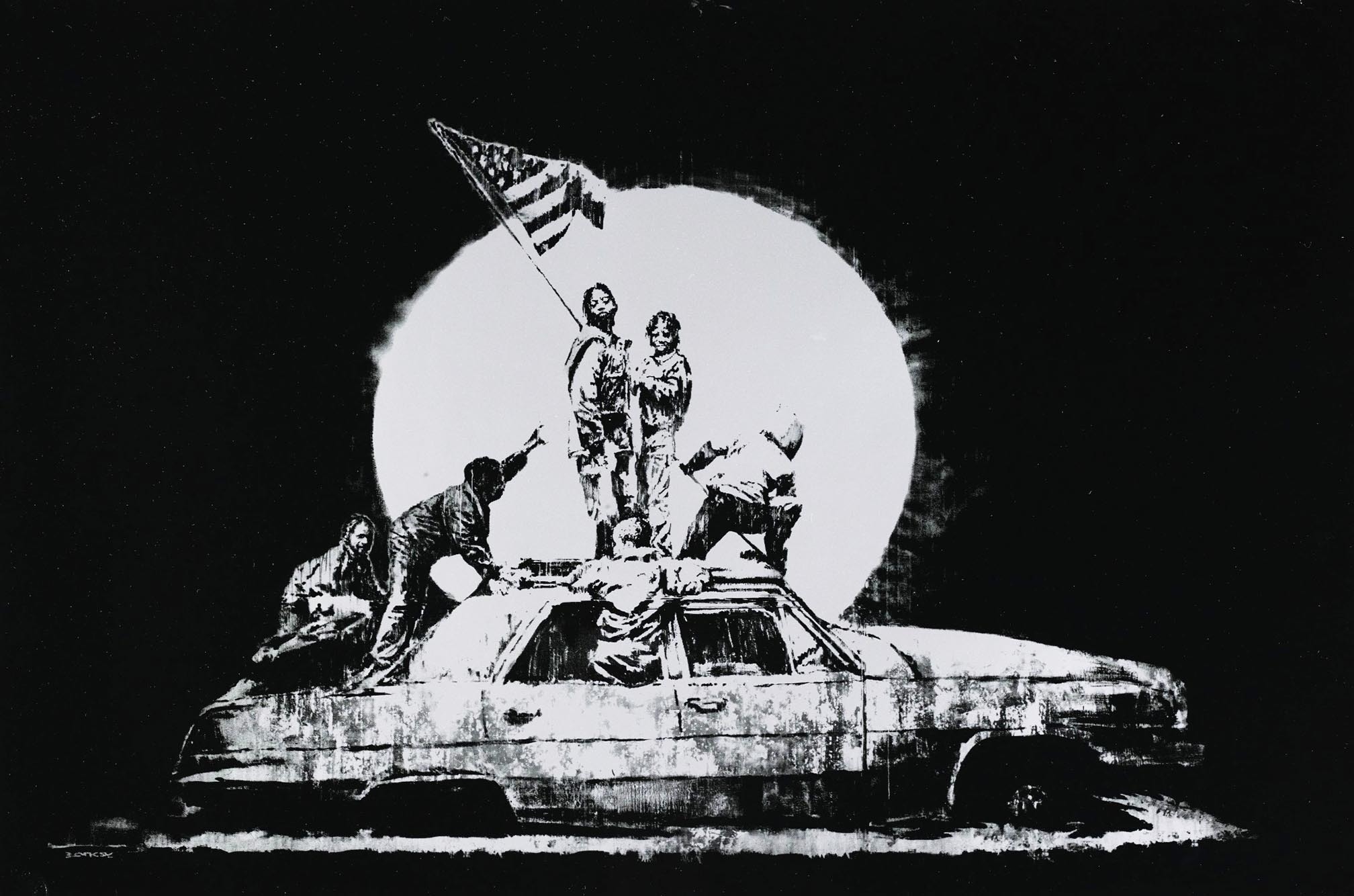 While Banksy was a firebrand in his own country, he paid a lot of attention to politics in other places around the world. This piece is a satirical take on the Pulitzer Prize-winning photograph of US Marines planting the flag at Iwo Jima in 1945, which came to stand for victory in World War II. Silver Flag replaces the soldiers with homeless kids planting their own flag on a decrepit car, showing the sad state of America in 2008.

Kendrick Lamar’s To Pimp a Butterfly came out seven years after the painting, but it’s most important song, ‘Alright,’ became the anthem to the Black Lives Matter movement at that time and still resonates strongly today. Silver Flag is ‘Alright’ and ‘Alright’ is Silver Flag. There is no other choice. 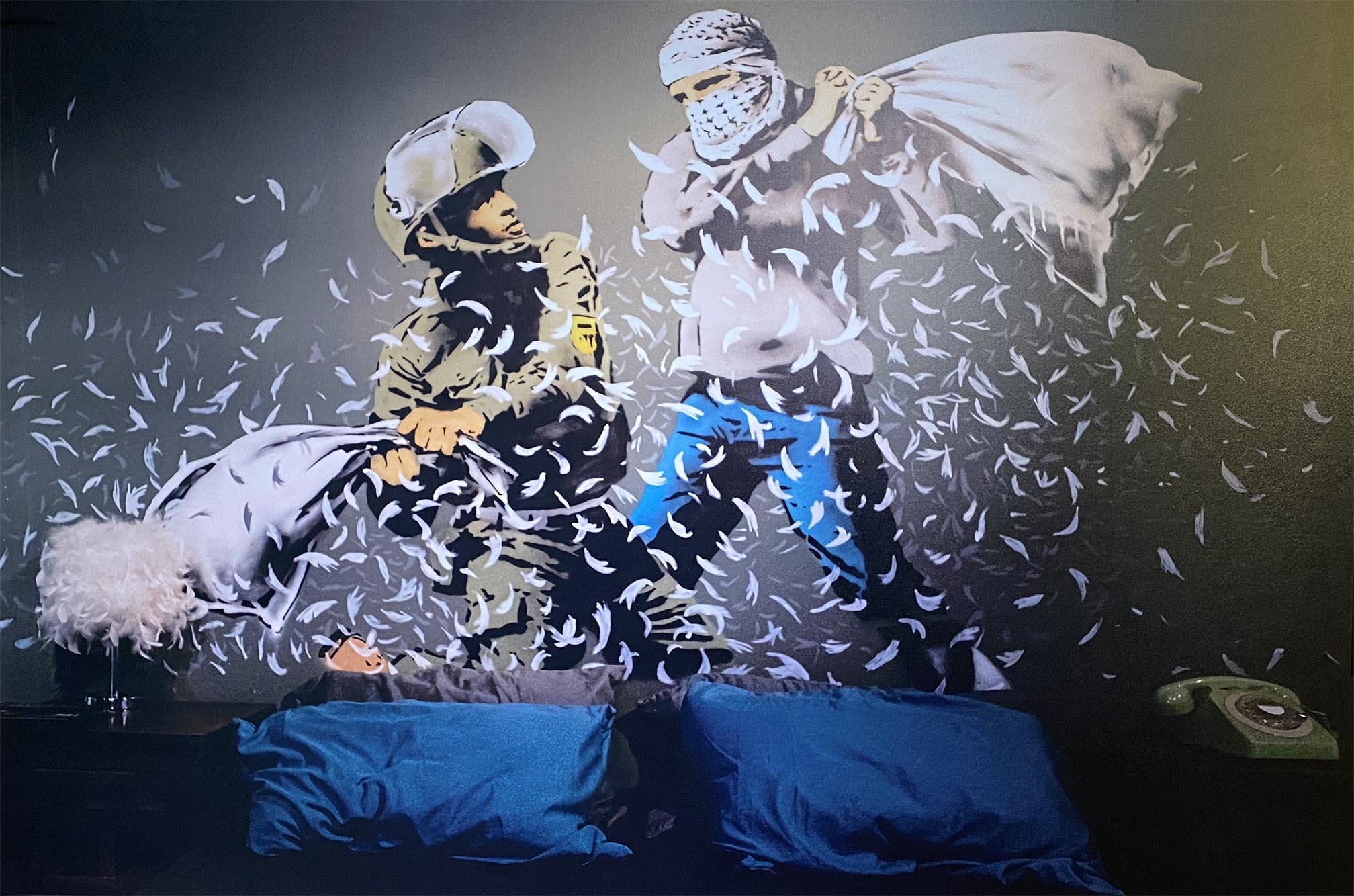 THE WALLED OFF HOTEL

Touting “the worst view of any hotel in the world,” Banksy opened a fully-functioning hotel right next to the barrier separating Israel and Palestine in 2017. Part protest, part hotel, part museum, the Walled Off Hotel invites open-minded Israelis to see the wall up close. There is a dystopian vibe running through the whole place, and each room has a real Banksy in it. In the bar, there is a self-playing piano that could plausibly play one of Pink Floyd’s biggest anti-government songs, ‘Another Brick in the Wall.’ 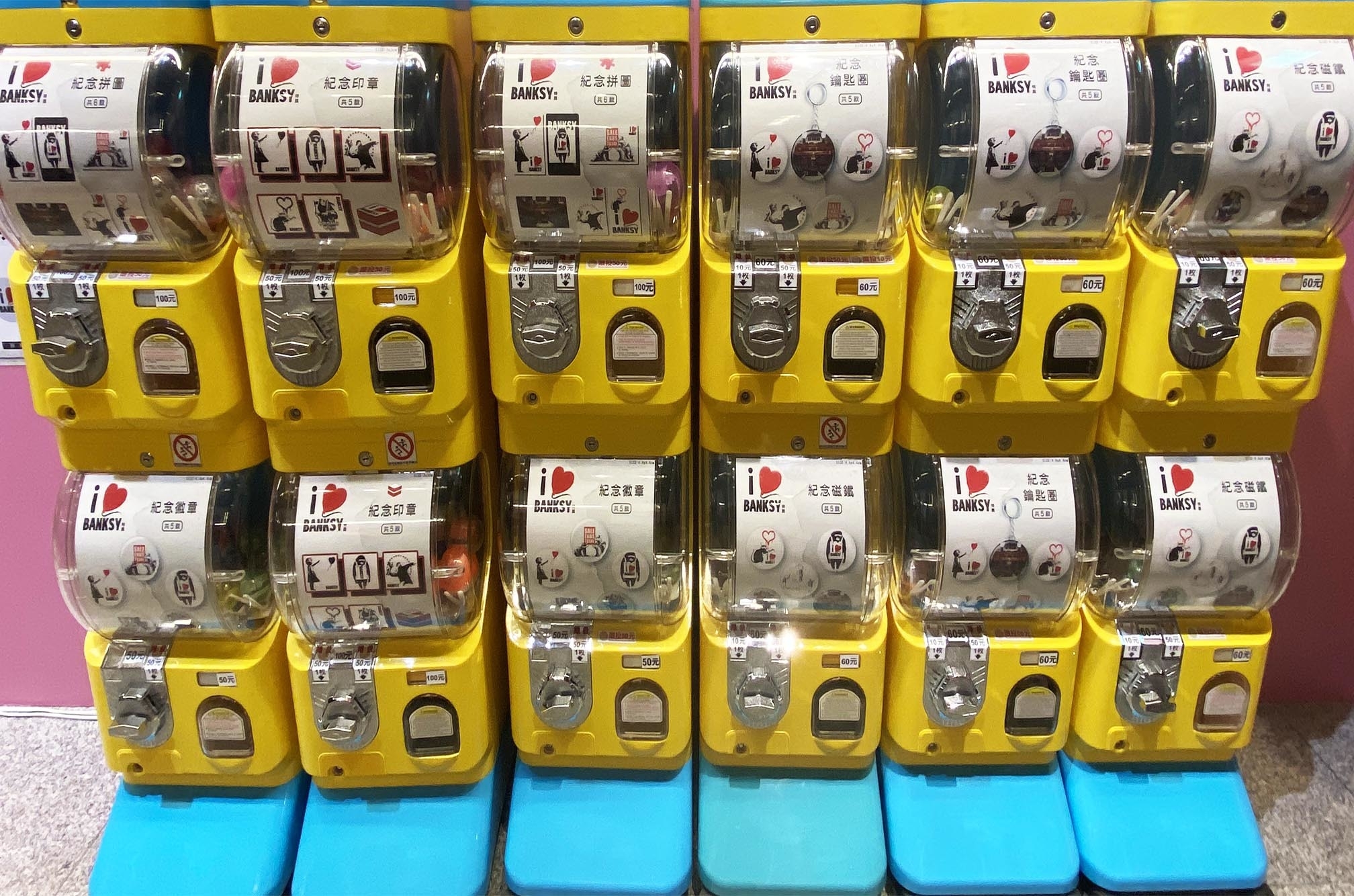 EXIT THROUGH THE GIFT SHOP

Leaving the I Love Banksy exhibition, visitors have to go through the gift shop on the way out, which feels rather outlandish since Banksy’s 2010 Oscar-nominated documentary Exit Through the Gift Shop is taking the piss out of consumerism in art culture. While the gift shop didn’t have nearly as many items as an Andy Warhol exhibit a year ago, there were still plenty of prints, keychains, hoodies that cost too much, and even a gaggle of overpriced bubble gum machines.

No matter how anti-capitalist you are, art exhibitions are always about the C.R.E.A.M (Claptone version)

I Love Banksy will be showing until April 5 2021. More information can be found here.