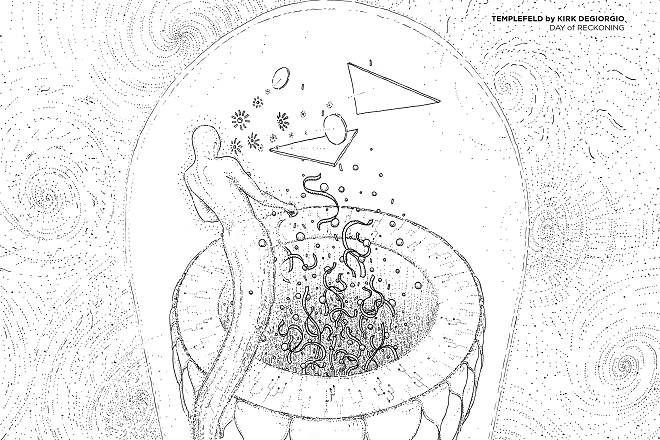 Singapore's Midnight Shift label has been responsible for more than its fair share of top quality house and techno releases since its 2011 inception. Along the way, they've amassed a seriously impressive canon of releases, from heavyweights of the scene alongside cult heroes and locally-based talent. Artists including Kink, MR G, Iron Curtis, Terence Parker, Gene Hunt, and Intergalactic Gary are among those to have contributed material. The quality of their output is undeniable.

After a very brief hiatus, the label return with a brand new project from the exceptionally talented Kirk Degiorgio, making his third Midnight Shift appearance, albeit under his new Templefeld moniker. An artist that is as difficult to pin down stylistically as he is technically accomplished, he's recorded under numerous nom de plumes for vanguard labels including Planet E, R&S, Mo Wax, Ubiquity, Neroli, and Peacefrog. Renowned for his immaculate deep techno productions, his sound also incorporates elements of jazz, soul, and funk. In the early '90s, Kirk set up his own ART label, from which he's released music from Carl Craig, Aphex Twin and more.

True to form from Degiorgio, the music on the EP is sensationally produced and refreshingly non-conformist. Opener 'Titan' is a slightly menacing trip into rolling breaks. Some kind of glorious drum n bass, deep techno, breakbeat hybrid, the suspenseful bass growls and evolves under crisp beats before metallic pads fill the sinister space. Title track 'Day Of Reckoning' is a subtly lighter affair but no less affecting. The sound palette is similar, and again the music begins in an ominous mood, but before long Enormously uplifting pads charge over the broken rhythm and heavy bass to create a life-affirming sense of positivity.

On the flip-side, we find the blissed-out mellow roller 'Vertical Life', which in all honestly feels like a distinctly horizontal number. The gentle rhythm trots under dreamy strings and pad layers while glassy chords play out a bitter-sweet melody under staccato synth stabs.

Drafted in to remix 'Vertical Life' is Anthony Child, perhaps better known by his stage name, Surgeon. A true standard-bearer for UK techno, Child's mix will likely surprise fans of his dance-floor oriented work, as he takes the already down-tempo groove and increases the chill factor by a number of degrees. Deeply atmospheric, his introspective version is endowed with a cinematic quality. Melancholy but with a sense of hope, the ambient soundscape surrounds and captivates the listener as the music meanders over five breathtaking minutes.

Templefeld By Kirk Degiorgio 'Day Of Reckoning' is out now, you can listen and buy it here