On Saturday, local Japanese DJ and promoter Mars89 put on a protest rave in the Shibuya district of Tokyo with the aim of uniting the community against many societal problems and looked to have drawn a few hundred people.

"You should probably get mad at these ridiculous things," Mars89 said ahead of the protest. He was talking about racism, sexism, anti-LGBTQ+ discrimination, lack of work-life balance, low wages, undertaxing of the nation's wealthiest citizens and corporations, government censorship, displacement of homeless people and even a new U.S. army base in Okinawa.

“When kick and bass in dance music moves your body, you will feel your body existing and affirm it positively,” a statement ahead of the protest read. “Dance is a behavior that makes yourself recognize, and it could be a way of resistance in the society where oppression caused by totalitarianism is spread. We dance, advocate and raise objections by affirming ourselves. That reminds us of the worth of individuals and problems inside this country. As existences of ourselves, we resist the situation overspread in this country.” 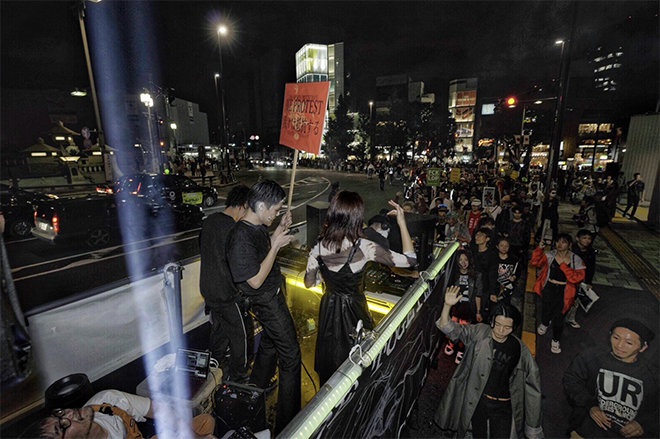 The protest began at Galaxy銀河系出発 and finished at Yoyogi park with DJs Mars89, Mari Sakurai, and Miru Shinoda leading the musical march.

Watch a clip from the protest below:

Story via RA, image via Mars89