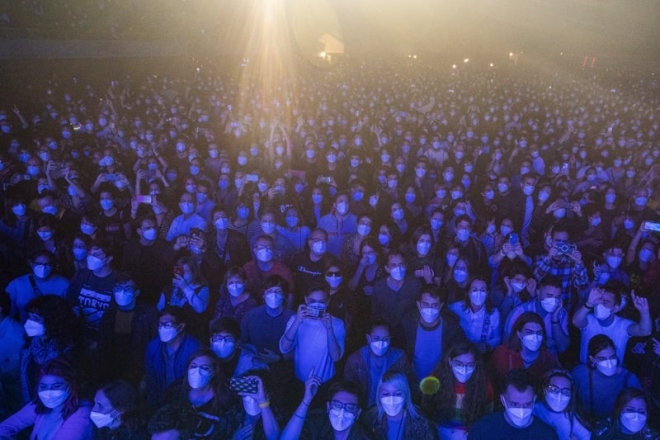 The concert was staged as a pilot test event to examine the viability of staging large cultural events without leading to coronavirus breakouts.

All attendees had to produce a negative COVID-19 test on the day of the event, then once inside the venue, the only safety requirement was wearing high-quality face masks provided by the organisers, meaning people were able to pack in tight and mix freely.

"This is for one night only, so enjoy it,” said one of the hosts at the event, which featured a performance from Spanish rock group Love of Lesbian. Singer Santi Balmes said to the crowd: “It’s been a year and a half since we last set foot on a scenario as a band. Some of the musicians are crying over here.”

Elsewhere across Spain, gatherings in closed spaces are limited to four people.

40-year-old attendee Jose Parejo said: “We were able to evade reality for a while. We were inside our small concert bubble. And we were even able to remember back in time when things like this one were normal. Things that nowadays aren’t that normal, sadly.”

Tickets were priced from €23 to €28, including the cost of a test and face mask, which had to be worn at all times aside from when eating or drinking in designated areas.

Ticket holders were able to select from three sites in Barcelona where they could take a rapid antigen test on Saturday morning. Those who produced a negative result were given a code on their phone which validated their ticket for the 7pm show. Temperatures and IDs were checked upon entry.

People with health conditions that make them vulnerable and those who have been infected by COVID-19 in recent weeks were asked not to attend.

The concert was backed by the Fight Aids and Infectious Diseases Foundation, which organised a smaller test event in December, which produced no new COVID-10 infections with the use of pre-screening antigen tests and the use of face masks despite no social distancing.

Speaking about the 5,000 person test event, doctor Josep Maria Llibre told AFP news agency: "We expect it to be completely safe. Over the next 14 days we will look at how many of the audience test positive for COVID and will report back."