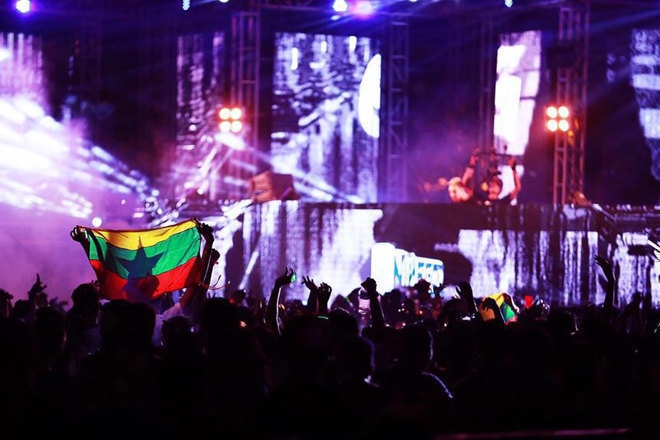 It’s fair to say that 2016 was the year electronic dance music finally blew up in Myanmar, which until very recently was a country considered recluse and closed off to the world with the Burmese nation only easing its border restrictions in late 2013. It didn't take long after that because shit is now on fire over there!

While still in its infancy, this past year has seen Myanmar appear on the radar over and over as far as festivals and top touring international talent across Southeast Asia goes. The world has taken notice as well with major international brands like ALDA Events as well as regional brands like 808 Festival entering the local market over the last year and developing the scene so quickly that in the last quarter alone it took dozens of world-class bookings to satisfy the demand. Agents, bookers and artists, take note.

The first international festival brand with a top talent to enter the territory was Together Festival from Bangkok, which debuted in Yangon in late 2015 with DVBBS and Dannic, marking a new chapter in festival experiences for the Burmese people. At the time we were curious to see how well developed and educated the local scene was there, how eager people were for dance music and how the government, which is still in the process of transitioning from military to presidential rule, would respond. Well, everyone responded pretty damn well.

The trend continued upwards throughout 2016 and Myanmar saw festivals like Golden Land Music Festival with Afrojack, Andrew Rayel and Wolfpack, as well as Rave In Color with Dash Berlin. Together Festival Yangon also returned for round two with Laidback Luke.

And there is still much more to come before the year is out. On November 23rd Armin Van Buuren will headline the inaugural We Are Connected Festival with MaRLo, Bassjackers and Firebeatz.

Following that on December 10th and 11th the very first 808 Festival Yangon, which heads to Myanmar from neighboring Thailand, will descend upon Yangon and features the largest line-up of international acts to ever hit the country including Hardwell, Dillon Francis, Carnage, Yellow Claw, Borgore, Valentino Khan and more over the course of two days.

And finally on New Years Eve in Yangon, Martin Garrix will carry the Burmese city into 2017 for the first ever countdown with an international act at the AVA Music Festival. The event is gearing up to be one of the biggest NYE shows in Myanmar's history and the organizers have said that they already have some big bookings for next year.

Further thrusting the country into the musical spotlight, earlier this year French artist Fakear released a visually stunning video for ‘Animal’ that was at least partially shot in Myanmar's ancient city of Bagan, a city famous for its idyllic aerial vistas of hot air balloons floating over fields of temples set amid dramatic sunrises. The video follows a young boy, wearing traditional Thanaka face paint, whose fascination with balloons leads him on quest to track down a hot-air balloon. Watch the video here.

That said, Myanmar has a healthy of dose of local artists that are helping to push the local scene on the day to day like Double U, Ninegod, Terror Bass, The Bugbears, Kendrick, M Invaders, DJ Wine, Ar-T and Icez.

We hope to be covering a lot more from the developing nation next year. Onwards and upwards!

[photo via Together Festival]