Released 25 years ago this summer, The Prodigy’s third studio album ‘The Fat Of The Land’ roared into the Guinness Book Of Records as the UK’s fastest-selling album at the time. It spent six weeks at UK Number 1, birthed two Number 1 singles, and reached the top spot in another 21 countries. It’s sold well over 10 million copies to date. The stats speak for themselves but, along with so many Prodigy fans, this album is a highly personal one. It’s what got me into dance music. And it’s kept me there ever since.

Released on XL on June 30 1997, ‘The Fat Of The Land’ hit the UK mainstream like an asteroid – with the bass to match. Just a year before, Britpop was still swilling in the aftermath of ‘(What’s The Story) Morning Glory?’, the England team were not quite winning Euro 96 and the Spice Girls were the sound of the summer. And me? I was 15, rocking my rucksack diagonally across my chest, a school tie so short I had to stuff the long hidden bit down my trousers. Musically I was somewhere between the exciting new world of The Fugees and the catchy fast bit of Babylon Zoo’s ‘Spaceman’. Yep. I know.

But something was brewing. There was this fierce-looking bloke on the telly with crazy hair shouting “I’m a firestarter, twisted firestarter”. Then a CD single with a fish on it landed on my school desk called ‘Breathe’. The Prodigy were getting louder. Getting everywhere.

The band – and they are a band – had formed back in 1990 and taken the rave scene by storm. I was too young for their debut album ‘Experience’, for the seminal 12” ‘Charly’ and also for sophomore LP ‘Music For A Jilted Generation’, not to mention the legal age required to actually enter a rave. But come 1997, the culture and the band’s puncturing of the mainstream meant that they finally reached my ears. 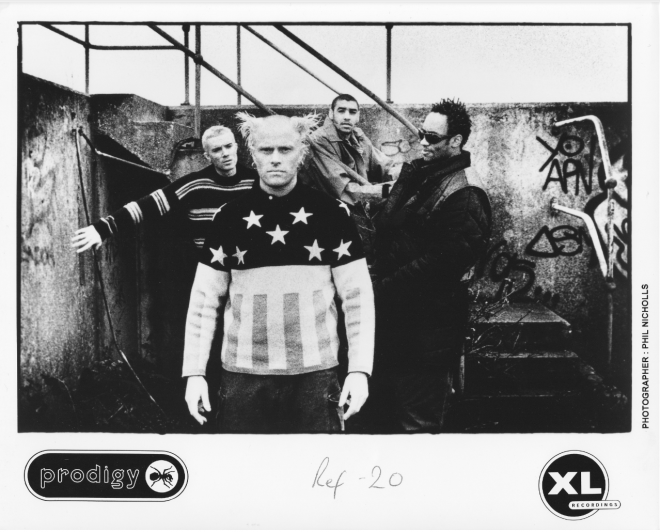 Photo above by Phil Nicholls

The first singles from ‘The Fat Of The Land’ – ‘Firestarter’ and ‘Breathe’ – both hit number 1 in 1996 and the album’s release landed among two other equally seminal long players: Daft Punk's ‘Homework’ and the Chemical Brothers’ ‘Dig Your Own Hole’ (which saw ‘Block Rockin’ Beats’ at the top of the charts in March ’97). But back then, I’d only heard of The Prodigy. ‘The Fat Of The Land’ was going to be mine. So I bought a CD copy in Woolworths.

There was other change in the air too, which would see Tony Blair’s Labour sweep to a landslide with a cringey soundtrack from D:Ream (with a certain Brian Cox on keyboards), East 17’s Brian Harvey being dismissed from the pop band after publicly eulogising about the safety of ecstasy and the first series of Teletubbies, which provided far-out experiences for the nation’s kids. The rebellion of the early 90s was getting popular, and for me, ‘The Fat Of The Land’ – a title taken from an old English saying about living off abundance – is where it collided. And for a 15-year-old London kid, that was fucking cool.

If there’s one thing this band and this album doesn’t hide from, it’s controversy. ‘Smack My Bitch Up’, released as a single in November 1997, was banned by the BBC and the whirlwind whipped up by its drug-fuelled video of violence and excess – and its outrageous title – still tops the rankles today. Despite its problematic nature, the Ultramagnetic MCs’ ‘Give the Drummer Some’ sample and its sheer velocity means its gone down in dance music history forever, charting at number 3 in Mixmag's Greatest Dance Track Of All Time poll. 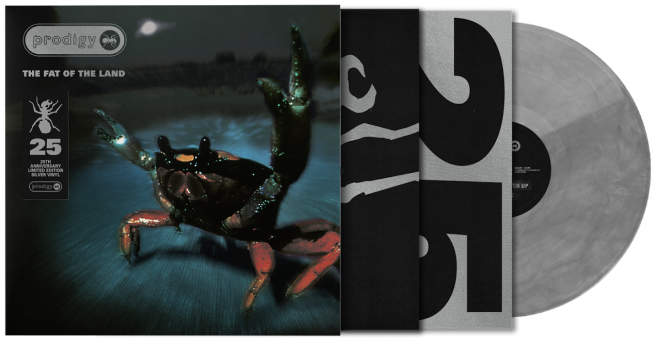 But let’s not forget that record artwork, either. Designed and illustrated by Alex Jenkins during his time as Art Director at XL (this fella would later go on to create iconic covers with the first two albums for The Streets). And speaking of icons... Those back-lit ants in the CD sleeve booklet. And that crab! Have you ever seen a crustacean with as much charisma? And the energy of the colours in that zoomed blur. That's some funky shit.

Of course, the album itself is epic. Uncompromising from its blitzkrieg beginning of ‘Smack My Bitch Up’ and ‘Breathe’. Yet for me, it’s always been that 8 seconds of echoing warehouse-wobble that drops just so insanely into one of my favourite hip hop jams of all time, ‘Diesel Power’, featuring the one and only Kool Keith, blowing your mind “drastically, fantastically”. After those openers it was a masterstroke. A different tempo, a different genre – yet that same raw, uncontrollable energy that The Prodigy bring throughout: from the punk rock guitars of ‘Serial Thrilla’ and ‘Fuel My Fire’ through to the dirty breaks and unmistakable melody of ‘Mindfields’, and the rave chant of ‘Narayan’.

We're talking about a band who, in the build up to ‘Fat Of The Land’, caused Brixton Academy’s false floor to cave in during a rendition of ‘No Good (Start The Dance)’ in ’96. Whose mosh pits are as wild as they are genuinely friendly (from my experience they knock you down then help you straight back up again). And a band who insist on playing John Paul Young’s ‘Love Is In The Air’ to float you out after every gig.

But does the album stand up today? To say it hasn’t aged would mean I haven’t grown up either. And some of it has. Yet the floor-filling (even floor-caving-in) potential of its big beast singles is as indisputable because they are timeless. And even if, for some, the breaks-driven rollers of ‘Narayan’ and immersive, Eastern thunder-rumble of ‘Climbatize’ take you straight back to a certain time, I dare you to play those tracks nice and loud next to any current jams on your Spotify list and deny their energy hasn’t swelled for two decades like a tidal wave.

But it’s all personal, right? And that’s exactly what this album is to me. I blasted it religiously to wake me up before every exam I ever took. And I’d argue it was the Prodigy's ‘Fat Of The Land’ that got me into Mixmag. Why it felt, when I interviewed them as winners of our Greatest Dance Act Of All Time reader’s poll, and got that album cover signed by my musical heroes, that something had turned a tremendous full circle.

Phil Dudman is a freelance writer. Ask him whether we need butter or guns on Twitter