British DJ and BBC Radio 1 radio presenter just went on a whirlwind tour of Asia that saw him hit Vietnam, South Korea, Singapore, and Hong Kong in a very short amount of time. The four-stop tour was packed full of food, bangin’ clubs, and little sleep. Follow Benji B’s jet lag-fueled travels across Asia, as penned by the DJ himself, and take note of all his recommendations for the next time you’re looking for a late-night post-clubbing bite to eat. 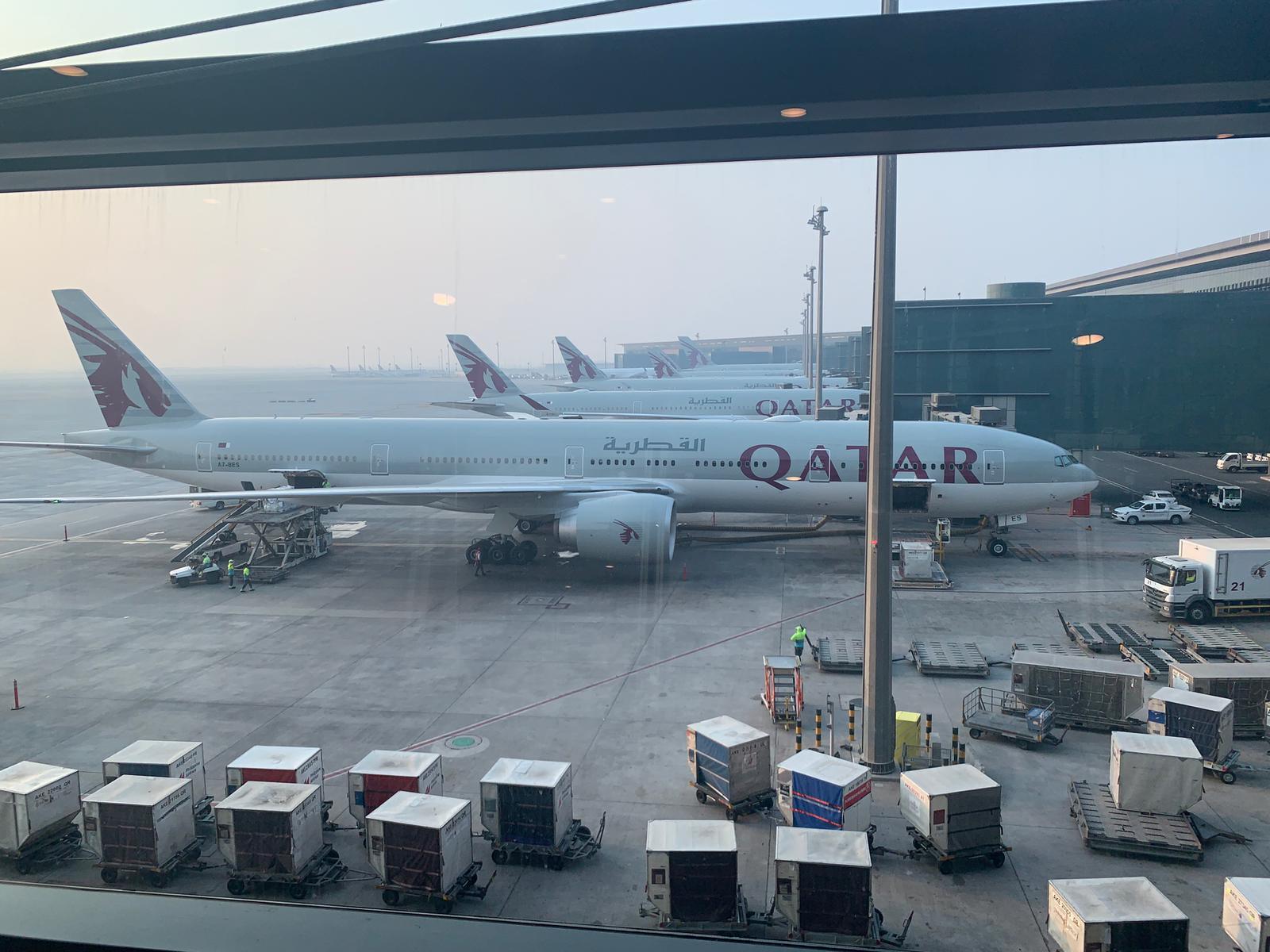 First stop—Vietnam. Amazingly, in all these years of touring, I have never been to Ho Chi Min city, so I said yes this to this one for a chance to witness Saigon for the first time. I flew with Qatar on the way there — even though it was indirect via Doha because it's basically the best airline in the world, so I have no complaints. Luxury vibes but the journey was almost 20 hours in total from when I left my house to landing. 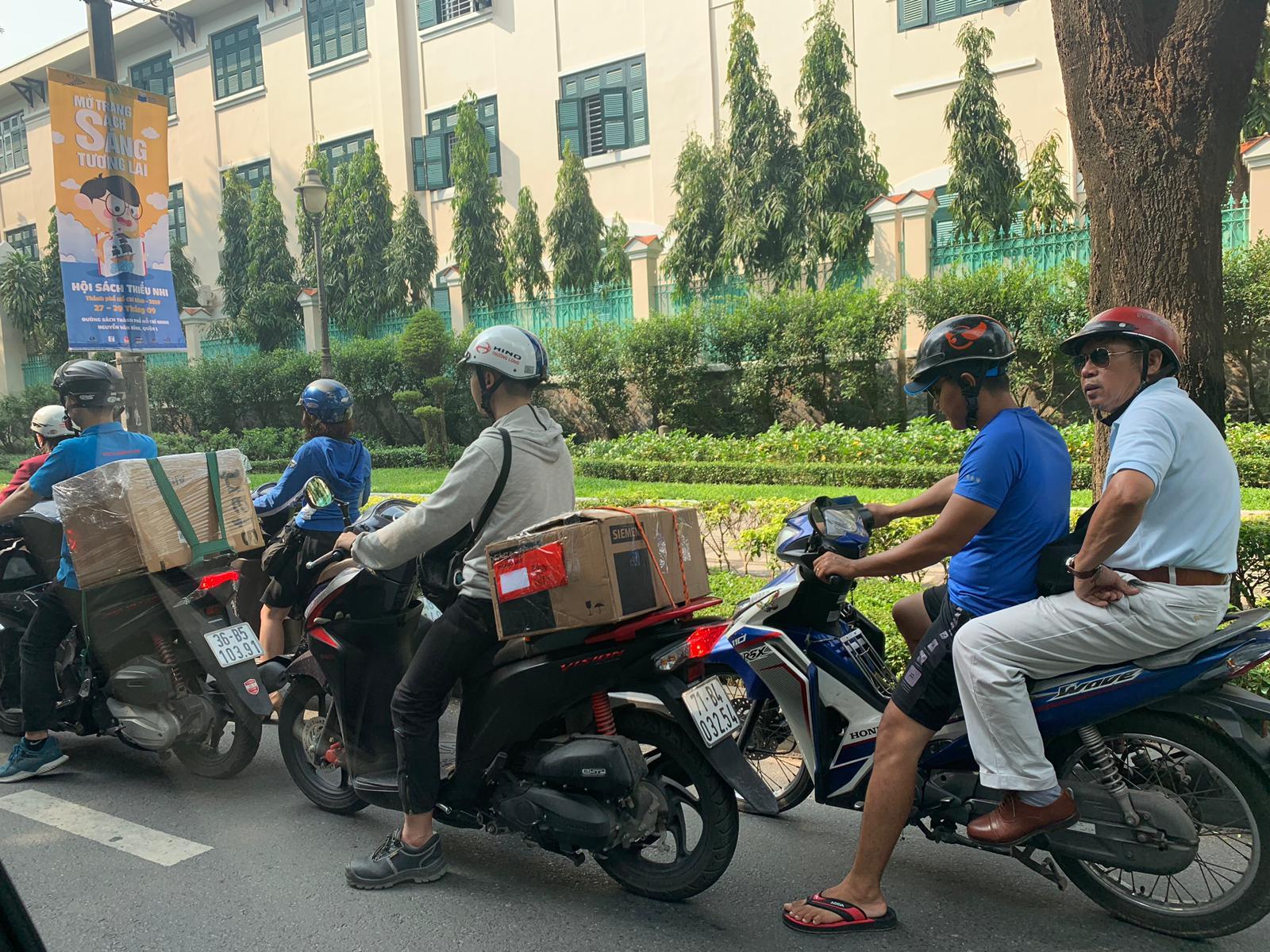 I landed in Vietnam at 9am. The first thing I noticed from the drive to the hotel is that I was in the city of the ‘peds — mopeds, mopeds and more mopeds. I’ve seen a lot in Bangkok and Jakarta, before but nothing like this. It’s a swarm of mopeds everywhere. My first impression on the streets is that it’s like Bangkok but less hectic and less stressful.

At this point, I’m excited to be somewhere new. I have heard that Vietnam’s culture and specialist music and club scene is relatively new, and I’m looking forward to checking out more. 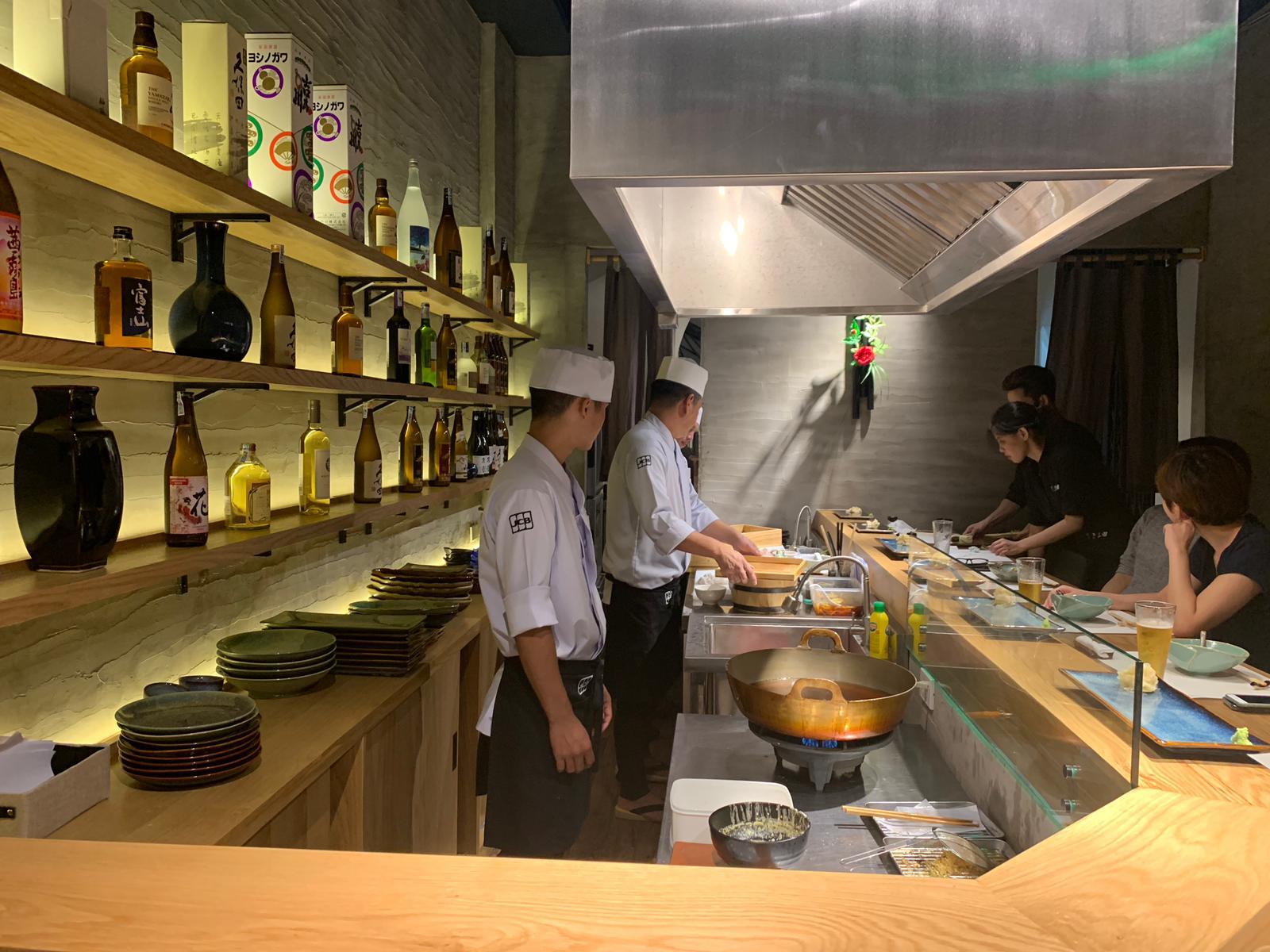 I went for a nap at 11am and woke up at 4pm, but I heard that Ho Chi Minh loves its coffee, so I missioned to find one. I drank an iced coffee that tasted and felt like it had the equivalent of eight espressos in it. Night off tonight, and the night before the gig, so I walked back to the hotel to meet promoter and say hello who invited me to try out a brand new omakase restaurant called Sushi Sake Restaurant Kiyota.

Funny to eat Japanese on my first night in Vietnam but I'm not going to say no to an omakase experience. Omakase is when a chef selects and creates the menu based on what's fresh that day. It's also usually done in front of you. This place was new in Ho Chi Minh and absolutely banging. It was an amazing dinner that moved through many different delicacies. Highly recommended!

After that, they kindly arranged for me to have a massage in one of the best spas — I ended up getting elbows and knees in my back and came out feeling beaten up but relaxed and refreshed. I thought I would knock out straight away… but nope, no chance. I was awake until 8am—jet lag is a hellovadrug

Since I had gone to sleep at 8am and woke up at 3 in the afternoon, there wasn’t much of the day left. I had missed out on some sightseeing, so I worked in the hotel on some rekordbox prep and popped some new tunes from the last few weeks onto my USB to test out on tour.

I headed out to get dinner early evening and had asked to go for traditional Vietnamese, so they took me to this legendary spot tucked away on the street that serves fried chicken and rice and soup called 31 Ly Tu Trong Chicken Rice. It’s an absolutely banging spot — I will be back there as soon as I land next time. If you go to Vietnam, check it out.

The promoter hospitality was great, and I found out they had booked me a reflexology treatment before the gig — I was told it would be the essential Ho Chi Minh experience — it would be rude not to, right?! So right before the gig, I was having the soles of my feet pinched and pressed, which was weirdly energising. I went straight to the gig, walked into the venue, and it was absolutely packed for a Wednesday night. Weirdly, the lights being on made me apprehensive, but as soon as I started they all went off and it turned into a proper club vibe. The venue was called Bam Bam — a relatively new spot for Ho Chi Minh. The crowd was the cool kids of the city who all stayed right until the lights came on. I ended up playing at least an hour longer than I was supposed to, there was such good energy. Not too many phones out, only at the beginning, then everyone just found their spot and got into it. It was a super cool and mixed crowd.

I tried to sleep at 3 am with no luck. I ended up falling asleep at 6am and then woke up at 9am to get a flight to South Korea.

Back in one of my favourite cities—Seoul—to play at a venue I have played at a few times before called Cakeshop. It’s always a crazy session and I’ve had some special nights in there but this one was extra mad as I was there as part of the International Stussy Tribe; celebrating the opening of their Seoul chapter. 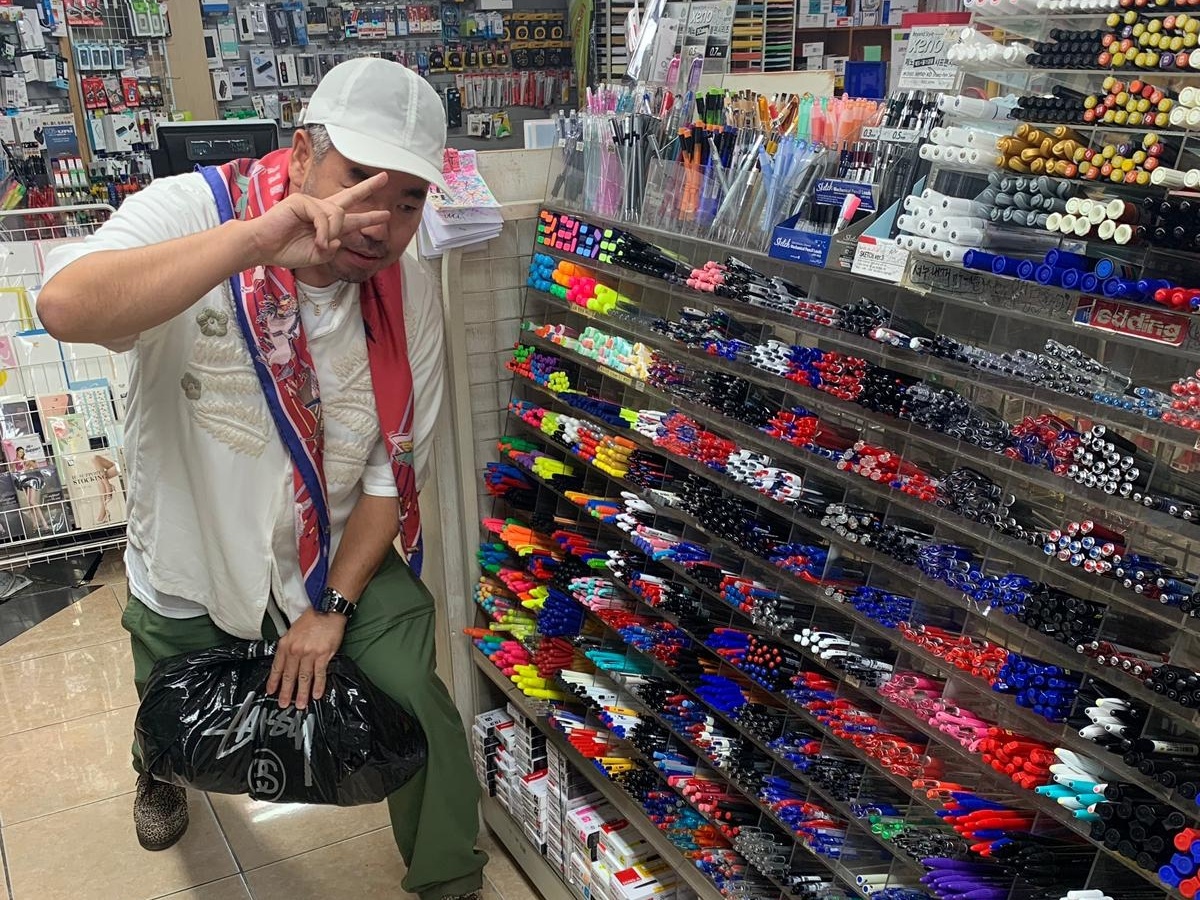 The first stop was the Stussy store itself, which threw an opening party from 6-9 pm. It was nice to see some familiar faces: the legendary DJ Soulscape, Kyuhee, KB and of course Fraser and David and the Stussy crew. I was hit with a bit of a jet lag, so I slipped off with Dave and KB who knew a good local food spot. On the way, however, we were tempted by a dumpling stall where we just posed for a picture in the Bladerunner style steam instead. KB indulges my stationary shop fetish for a minute, and then we headed out to one of the best restaurants I have been to in Seoul.

From there we head to the hotel for a disco nap but I oversleep and wake up 3 minutes before I’m supposed to be downstairs. Again...jet lag is a hellovadrug. 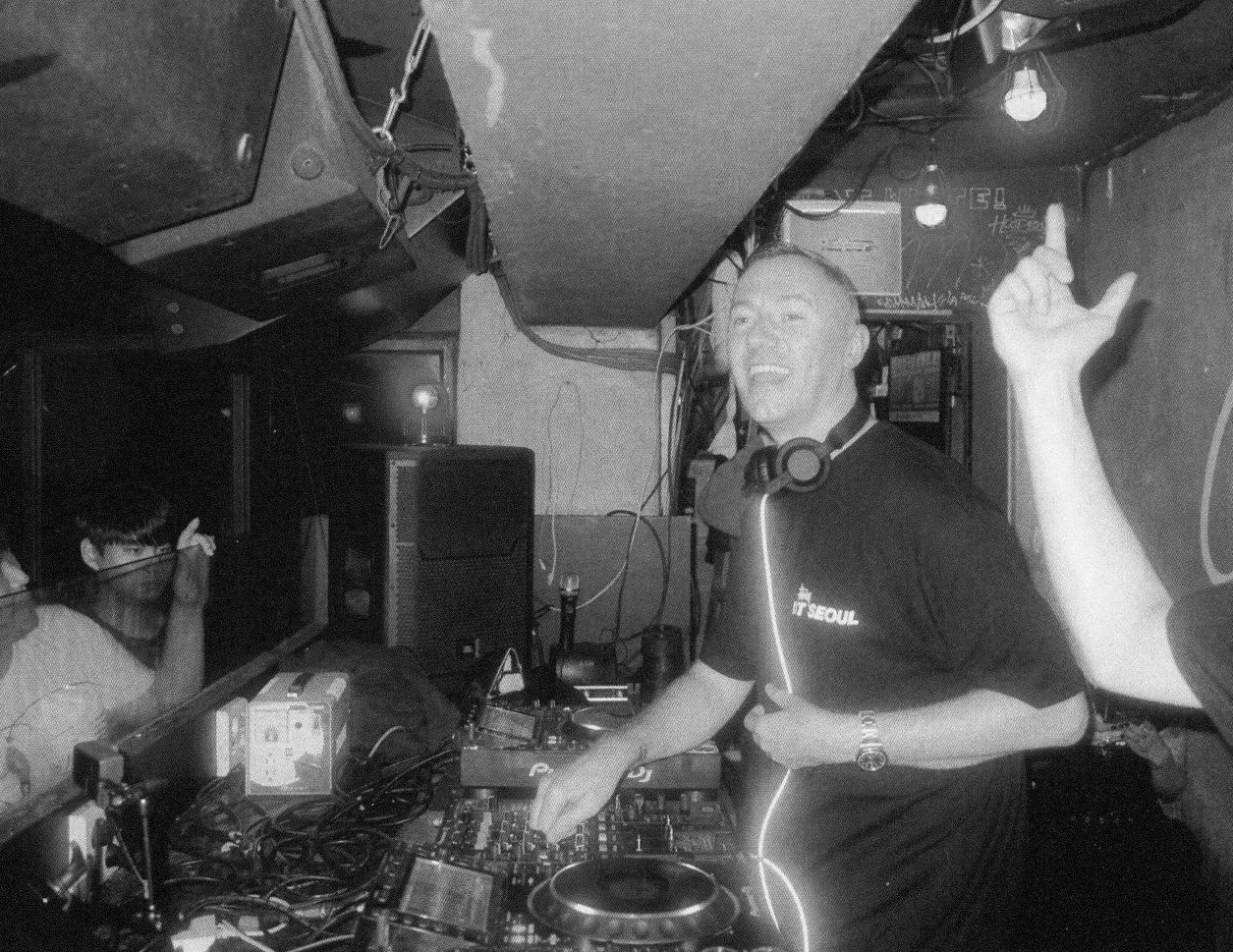 At this point, I haven’t really been to bed since the night before, but I don’t care because I’m about to walk into Cakeshop, which gives you all the energy you need. Tonight’s line up for Stussy is across two clubs and two floors — both Cakeshop and Contra are open at the same time, which doesn’t always happen.

The legendary DJ Soulscape (who is the oracle of the Korean music scene as far as I am concerned) had put together the line-up on both floors. He had really embraced and supported the new generation of Korean talent, which I was really keen to hear.

I play downstairs at Cakeshop, and it goes offff — I played for two hours and could have kept playing. It was such a good gig and an amazing crowd. Later, Soulscape told me that it’s rare to see all these different heads and young DJs and producers in one room — they all came out — and actually, you could feel that. It was a sick atmosphere and one of my favourite gigs of this year. I stayed to listen to sets by Cloest Yi, DJ Co KR, Someone Kim and Jell Vako. They all were super talented and inspiring.

I should have left to try and get some Zs before the flight, but I was enjoying checking out the sets on both floors, so I ended up staying until the end. 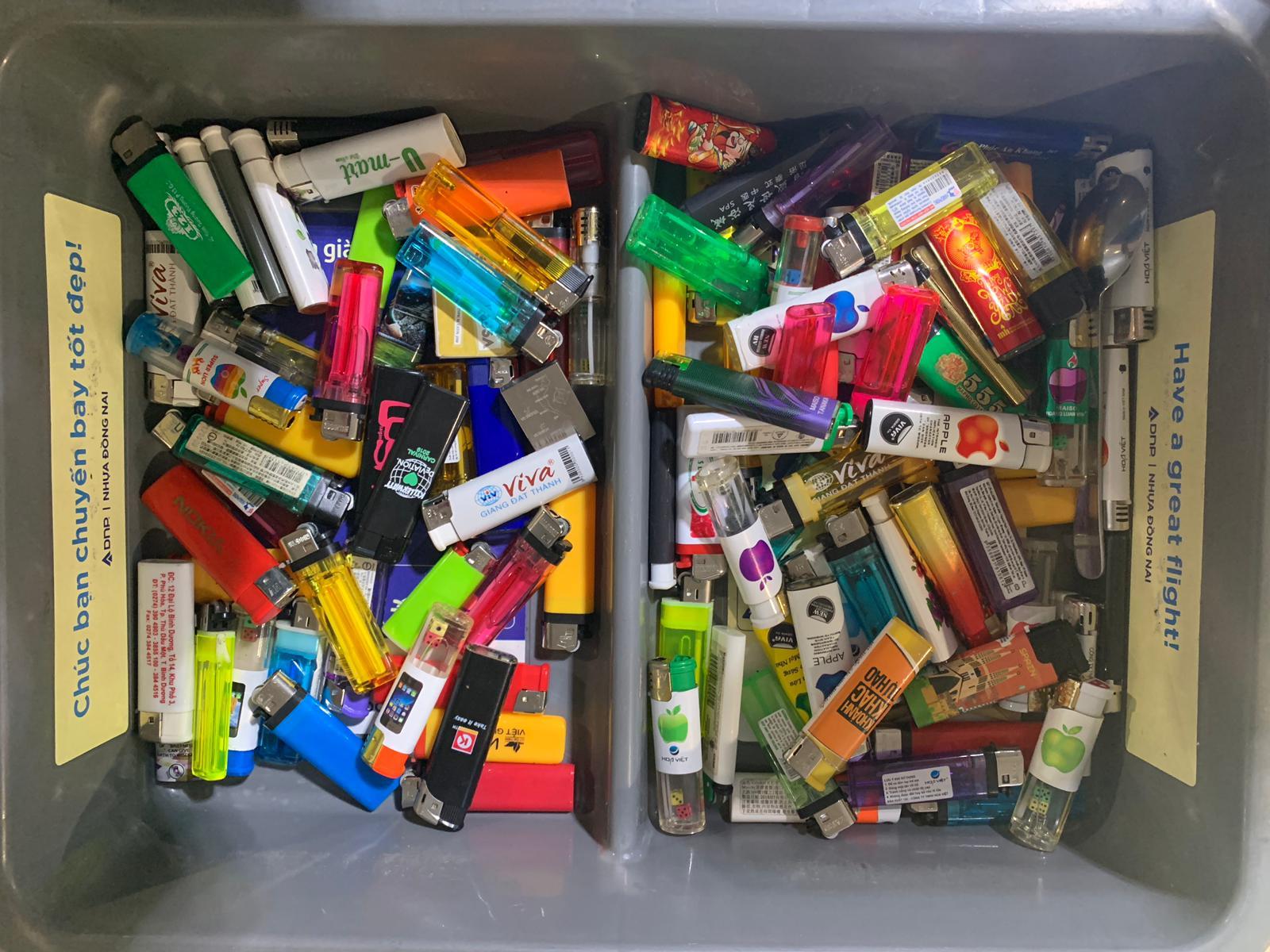 I forgot that Korea and Singapore aren't so close, 7 hours or so which is a bit like London to Chicago or Detroit. Don't be fooled that once you're in Asia that everything is close — it ain't. Fortunately, Korean Airlines are very good, and I managed to sleep for a few hours and get some work done. I've been working on a Deviation Classics compilation on the flight. 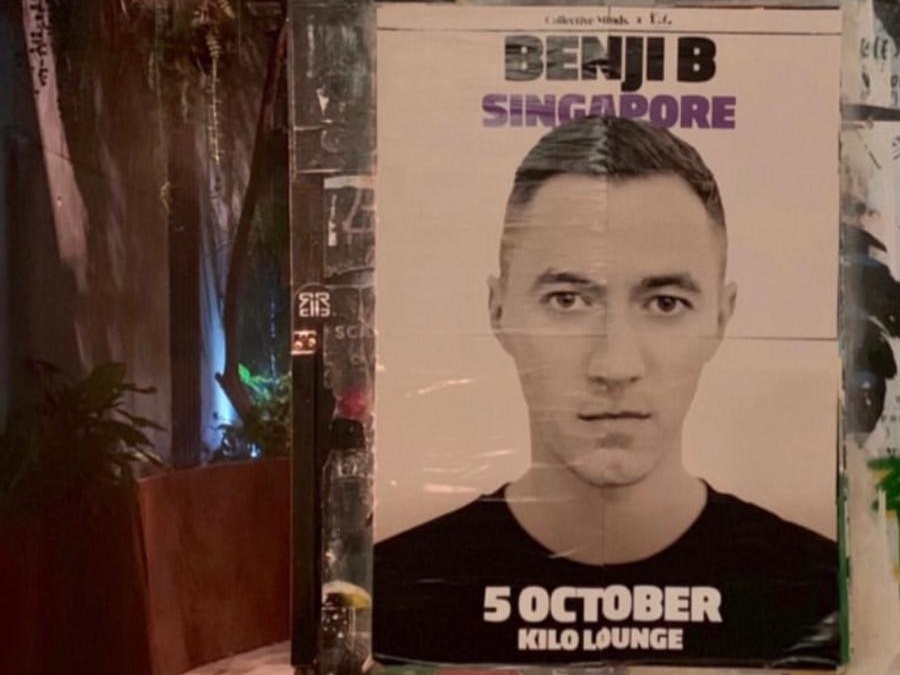 I landed in Singapore at 10pm and met my girlfriend who was also there for the weekend. We had a quick dinner and then headed straight to a gig at Kilo lounge, where I have played before. It’s had a refit with a new sound system and some monitors that are almost as loud as the sound system. It was a sold-out night with a fun crowd and I played the most diverse set of the trip from 1-4am, playing until the lights came on and then we piled next door for a Korean BBQ…in Singapore.

I arrived back at the hotel at 6am, was asleep at 7am with a 10am pickup to Hong Kong.

Cathay Pacific wins the award for the best airline lounge. I feel like I’m in an art deco hotel, a member’s club or something. I’m making this two-hour sleep vibe ok with some good noodles and the only place in the airport without harsh hospital anti-hangover lighting. I like it in there, but I can’t wait to get on the plane so I can knock out. I then got word that the gig that night is cancelled due to protests in Hong Kong. I’m already on my way, and my flight back to London is from Hong Kong, so I ended up with a night off.

The flight is only three and a half hours — but no time to sleep as I had to work on the plane before London woke up as there were a few bits I had to send. I generally do all my emailing on planes offline, and then they all send when I get to the hotel. No sleep? No problem. I knew that soon I’d be checking into my favourite hotel in Asia—I’ve been looking forward to this all week. 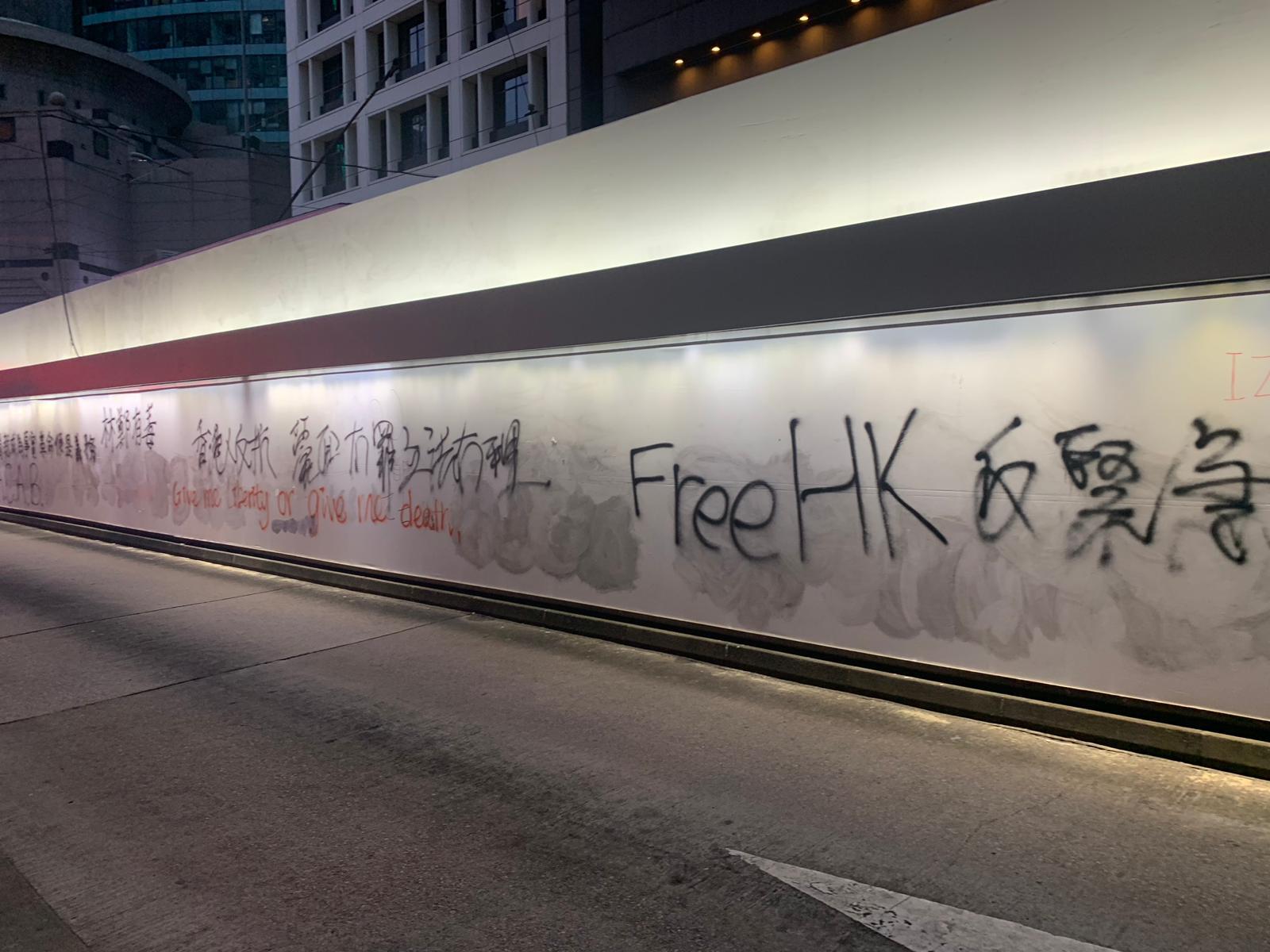 I arrived with the promoter Zaran into town barely 20 mins after they opened the roads following the protests. We weaved in and out of bricks and smashed plants and bollards in the street. It’s amazing to see Hong Kong this deserted.

Finally I checked into the Upper House, which is easily one of the best hotels I have ever stayed at, and enjoy a rare night off. The next day is the aftermath of protests and also a public holiday so I walk around the city for a bit — feeling the atmosphere, seeing some of the protesters in the street and reading some of the slogans. I film some for social media and I’m told to “be careful” about posting them... 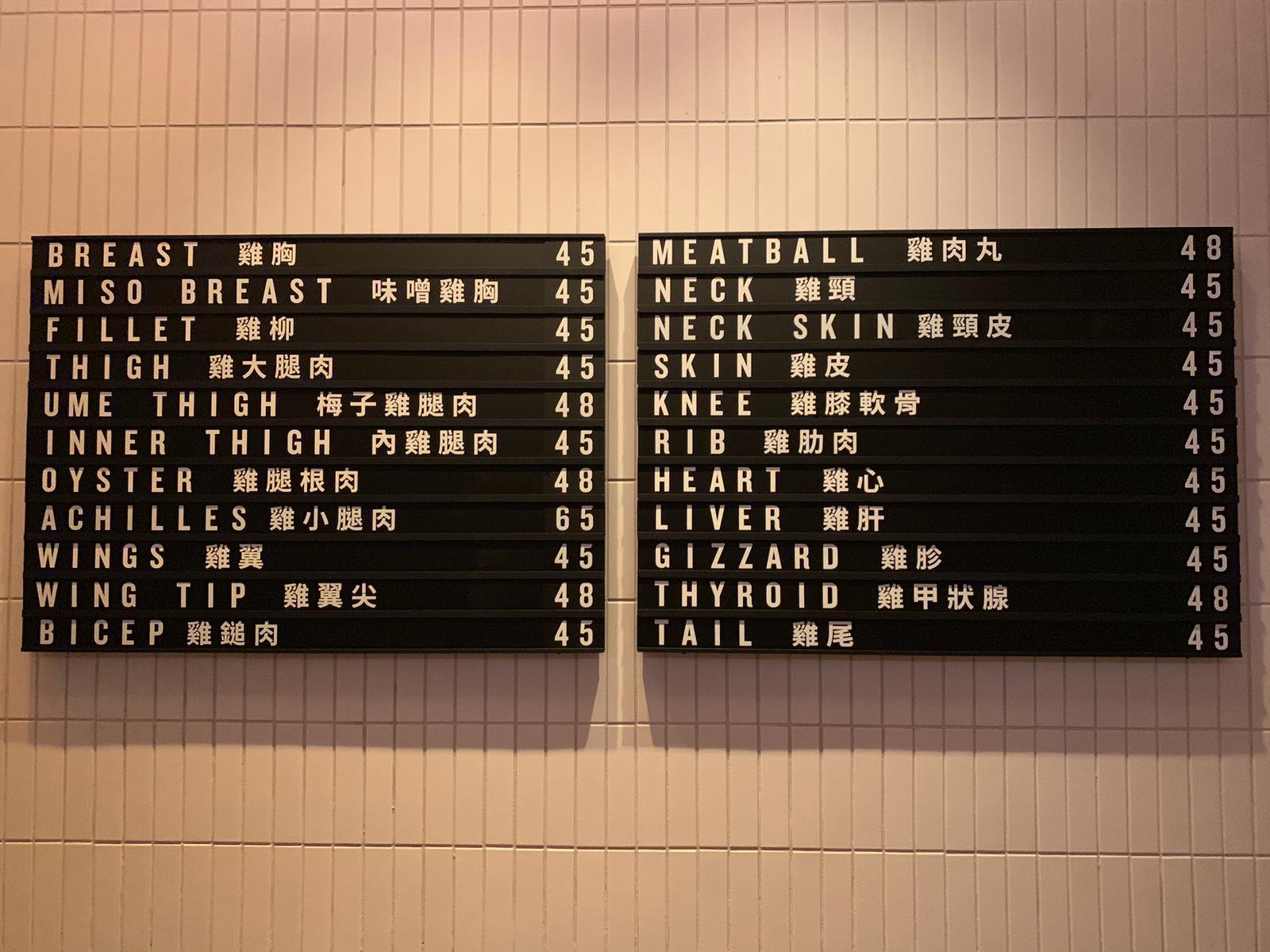 Most of the stores had closed, and the galleries and places I wanted to check were all shut. I headed back to the hotel and bumped into ASAP Ferg who was checking into the same hotel. Later I ate with Zaran at a spot called Yardbird that sells chicken of every variety you can imagine. Again, recommended. I had the miso breast and the KFC (Kentucky fried cauliflower). 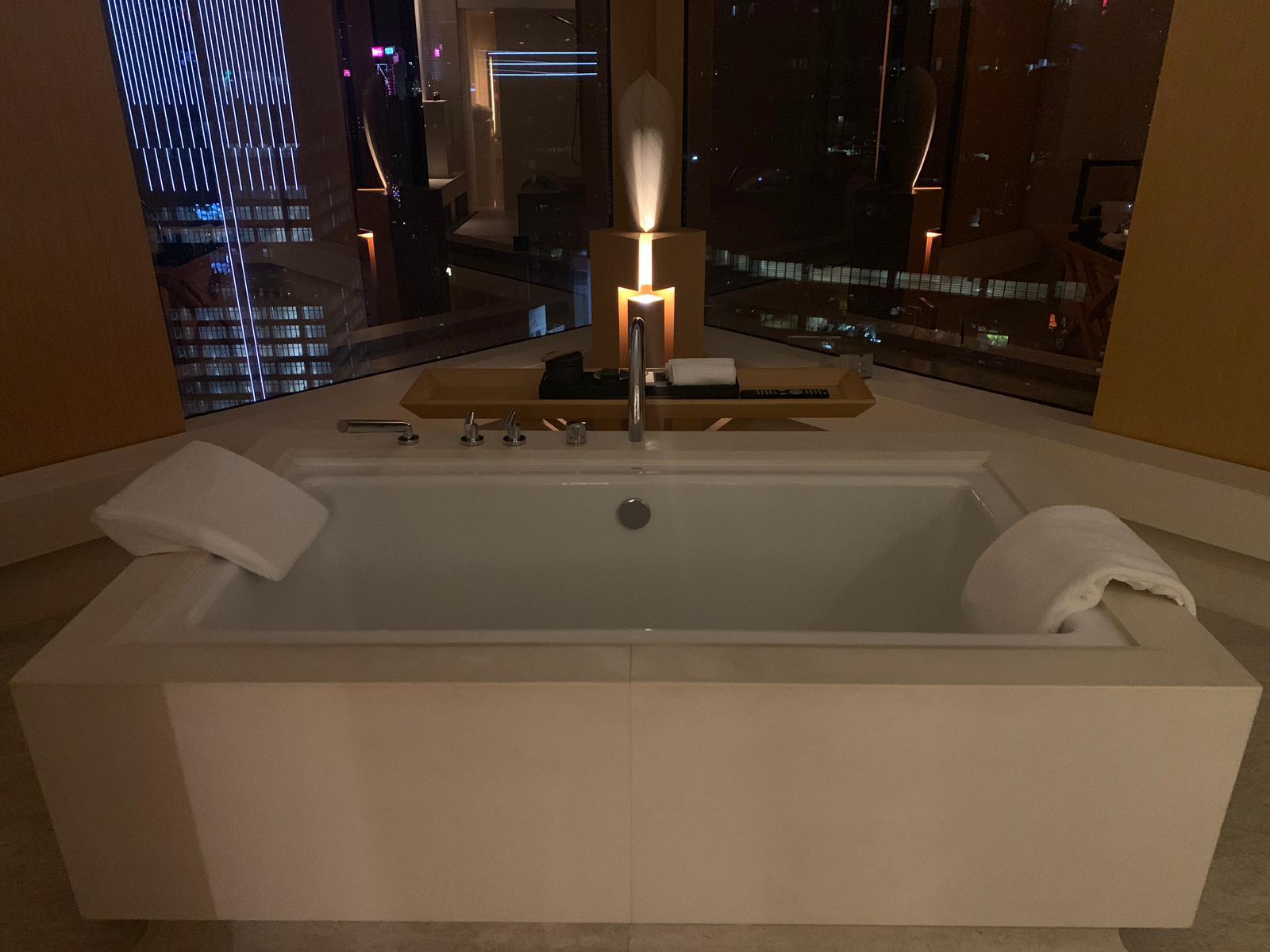 On my last day, I caught up on sleep, packed up for the trip home, enjoyed the Upper House view and the bathtub. I did some emails, made some calls as the UK woke up, and packed. For the last dinner, I hit Mott 32 with the Rimowa crew, the founder of Norse Projects and Fed And KP. It was then straight to the airport to take a BA flight back to London.