Anyone with a tasteful eye on Asia and Instagram has likely seen postcard perfect photos of Sri panwa floating around the matrix. More than just a dream destination for every travel and fashion blogger on the the gram, the unabashedly opulent pool villa resort sits high atop Cape Panwa on the southernmost point of Phuket and is also where artists like Skrillex and Snoop go to decompress and occasionally even play very intimate and exclusive shows. The resort is spirited by the Baba brand that has developed into Thailand’s answer to a seductive yet sophisticated beach club that brings with it enough style and swagger to beckon some of the world’s top artists but remains accessible enough for you and I.

Beginning with Baba Nest, Sri panwa’s award-winning rooftop bar that commands 360° panoramic views of the Andaman Sea, and extending to Baba Beach Club, which is about to debut two new ultra-chic and high-glamour locations in both Phuket and Hua Hin, the family run business makes it a point to marry their business with passion and music is high up there for managing director (and dishwasher extraordinaire) “Wan” Vorasit Issara. A DJ himself that comes alive under the Ibiza spotlight, Wan’s focus beyond expanding the mother business has been on growing the music program and with that he’s invited artists like Avicii, Rita Ora, Sasha, Soul Clap, Jamie Jones, Damian Lazarus and more to play, produce and pacify in his hotel. While this might sound like everyday business for a luxury hotel, it's led Wan to expand his day-to-day music program and book underground house, techno and disco DJs from around Thailand to help commandeer the Baba vibe.

Together with his Russian music director Sergey, every week they host local talent like Sunju Hargun, Mendi Indigo, Dan Buri, Fishmonger, Maarten Goetheer and more to help them curate playlists live that get uploaded to the Baba SoundCloud account and also put onto customized iPods that are found in every single room and complemented by an in-room Bose sound system. Find some of their top picks to get you familiar with the Baba vibe and brace yourself for the opening of Baba Beach Club and the events to come with it. Words with Wan below. 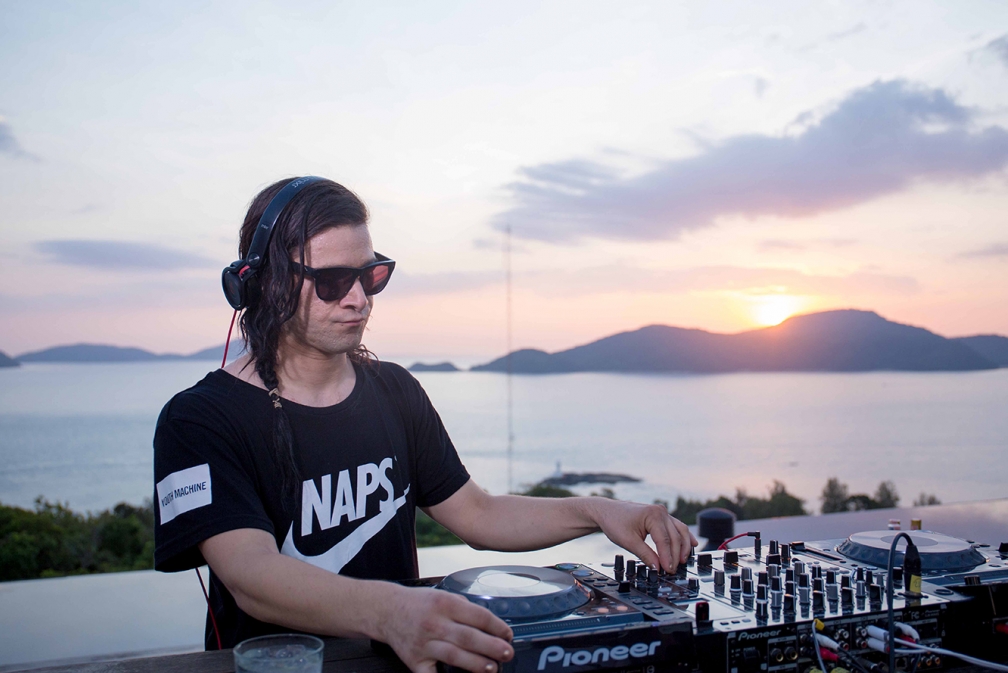 Sri panwa is self-described as a ‘music friendly hotel’. What does that mean and why is music so vital to the image and mood at the hotel?

We incorporate music everywhere throughout the hotel apart from the garden and our guests never come here and ask us to turn off the music. If a guest doesn’t like music, then this hotel is not for them. It’s like being in a pet friendly hotel or a kid friendly hotel. You know exactly what you’re singing up for and what you’re paying for.

When compared with other hotels, which typically have only one soundtrack and limited songs, in each room we have an iPod with nine different collections of four different genres like sunset, chill out, bossanova, jazz – and that’s just one set. Throughout the hotel we change the music according to the times – morning, afternoon, evening. In the spa we do more of an organic sound. But we never play EDM – it’s not our concept.

Piano, jazz and generic house music are typically found playing throughout public spaces in luxury hotels. What inspired you to take Sri panwa in another direction?

Piano, jazz, house – I love it all but it’s what you hear when you walk through a shopping mall. Here you’ll might here some lounge house to create mood, which I’ve been a fan of since Café Del Mar, Hotel Costco Del Flow, Ministry of Sound mixes – all that stuff from back in the day I love and I wanted to incorporate it into the property.

Originally it was a matter of personal taste and when we were doing the concept of the hotel, it’s what we went for. Before SoundCloud, we put all our mixes onto iPods so now every room has access to that as well as SoundCloud and MixCloud. 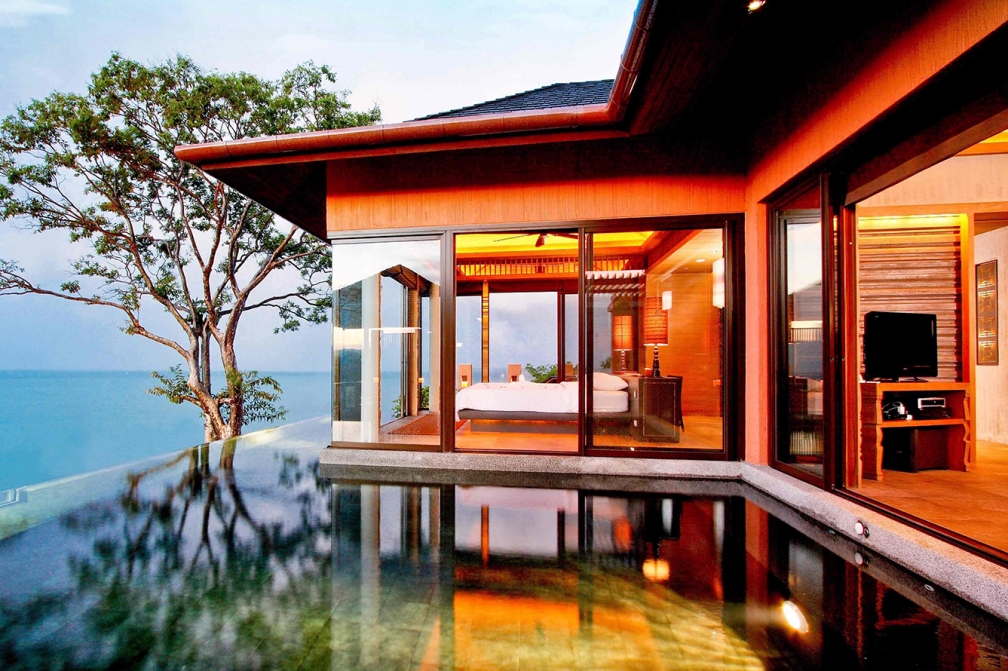 How would you describe the music policy at Sri Panwa and what artists might you hear flowing through the hotel and spa?

We have good contacts with the promoters and the sponsors of all the big concerts, a lot of personal relationships as well so they send through a lot of artists and we sponsor the room. From Avicii to Snoop Dogg, we’ve had Steve Aoki to Flo Rida, also Nicole Moudaber to Jamie Jones to Damian Lazarus through Skrillex, Diplo – we’ve got everyone coming through. We’ve become sort of a chill out place for them. But we’ve also got some live sets from Skrillex, Fatboy Slim, Vicetone and Nicole did a live set here and recorded it for Mixcloud. We’ve also had Thai artists like Thaitanium who come here to write songs and make music videos – that’s how we were connected with Onno and Snoop Dogg. We have all kinds of artists coming through and we love it, we love hosting them.

The music policy is something nice, it’s not for everyone I think but we cater to music lovers. The inspiration comes from hotels in Miami, the south of France, in Spain and Ibiza that all have great music, great mixes playing and great DJs.

I grew up in Florida and Asia was missing that. In Asia the hotels we’d go to were typical Thai music, or pop music played in a pool. So when when we were designing the hotel, we actually designed it around the playlist. The music direction actually finished before everything else – actually a year before we arrived. It was very important to us. 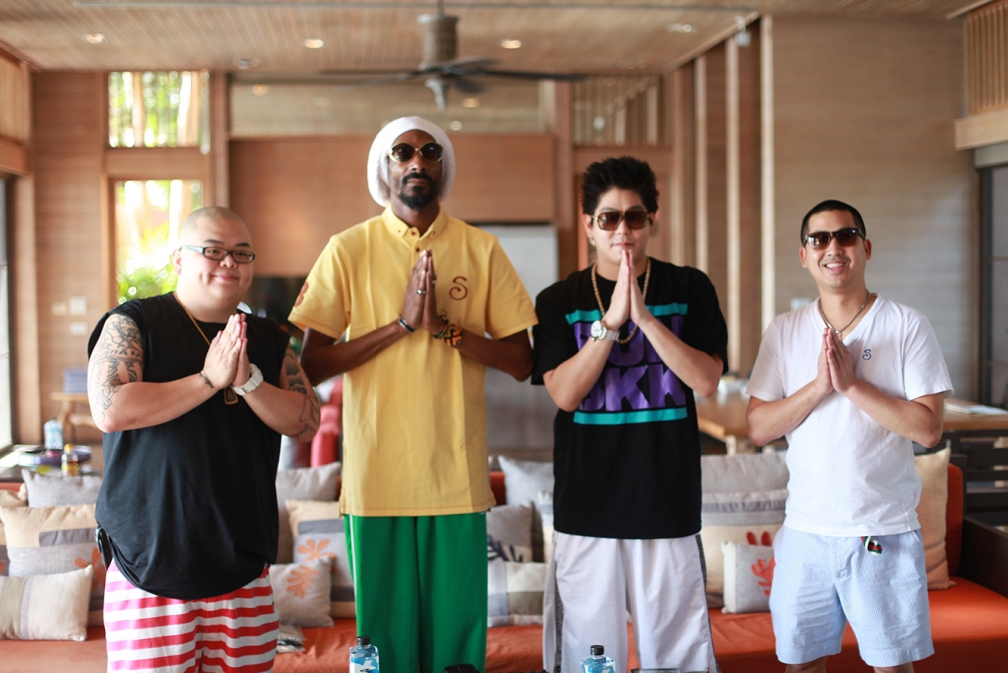 Sri panwa has also adopted a unique live music program when compared to other luxury hotels around the world. What inspired booking more minimal and underground DJs over typical poolside pop or EDM?

Because we like it! Our opening team, which included Sergey and I, who is our music director, he’s one of the biggest music directors that we know and we’ve been working together since then. We started live music sessions to be more open and we have lots of Thai guests coming for them but we also fly DJs in to play for variety and to keep our team interested and inspired.

We've also chosen a more underground route because poolside music is boring and EDM doesn’t fit well in our environment. It works better in club or a concert hall but for us it's more about chill out music like house, tech house or even lounge house. We sometimes do techno but it’s darker and transitions more into the night.

How do you go about finding and selecting DJs to play at Sri panwa each week?

This program was started by a younger generation of our team, Sulie, who invited Sunju Hargun for his birthday and then it carried through. We have so many connections to DJs already so we let Sulie lead the charge.

We were trying to find DJs for a long time and we had no one passionate enough to work on it but now we have the person for it.

We rely on word of mouth and vibe, both local and international DJs who are coming on holiday. 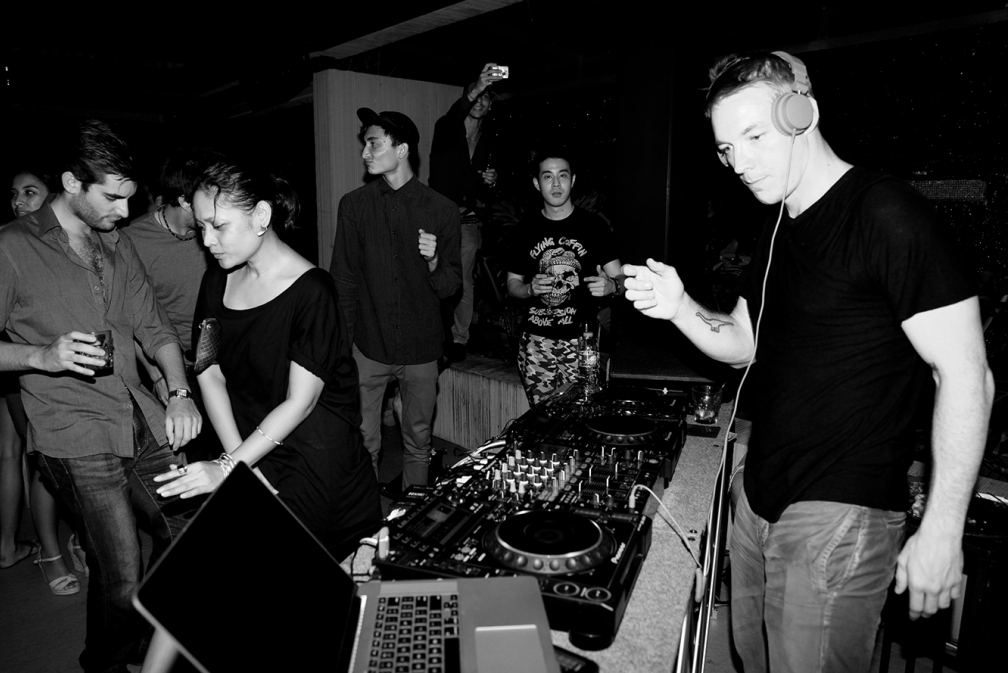 Who are some of the more memorable international acts that you’ve hosted at Sri Panwa and what kind of unique experience were you able to create for them?

Snoop Dogg – that was one of the more exciting ones. He did a private show for us when he was a launching his new line. He did a live mix for our hotel and sang along to it for an hour. That was amazing.

We had a Christmas party with Jamie Jones and Damian Lazarus and Citizenn – that was a house and techno Christmas party. Everyone took turns on the turntables.

Baba Beach Club is opening two new locations in the coming months. What is the sound direction for music and DJs there?

If you go to our SoundCloud and MixCloud, that is the direction that we are going. But for example the Baba Beach Club location in Phuket might be more raw, rough, more hardcore and more banging. But in Hua Hin it will be more juicy, more sweet, more melodic and more loungey. We’ll throw in some Sinatra and old jazz for earlier in the day because it’s got a more colonial period design whereas Phuket will have a more Chinese colonial style with the best sound system out there. 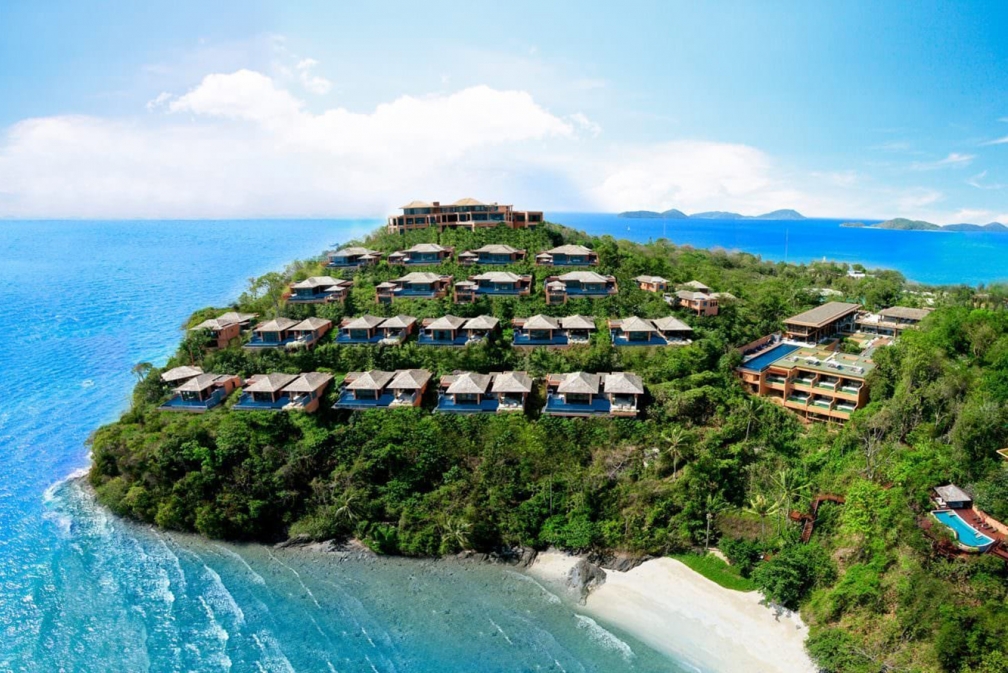 How do you feel Sri panwa is different from other ultra-modern music-oriented hotels like the W Hotel?

We’ve been to so many W Hotels and they have amazing music and we’re definitely going in that direction. The W Hotel is a fun brand for Starwood in way that Baba is a fun brand for Sri panwa, we consider ourselves to be more fun formal. We’re also the only hotel in the world to provide iPod’s in the hotel room with a sound dock so we don’t try to to totally control the environment and experience but we are guiding guests to experience what we are hoping for. During turn down service, we adjust all the music too. Even in the car, the pick-up music is different from the drop-off music and if the guests are going out at night we have even more selections. The music training program is pretty difficult to get right but our staff knows what’s going on.

What five tracks best embody the vibe and spirit at Sri Panwa? 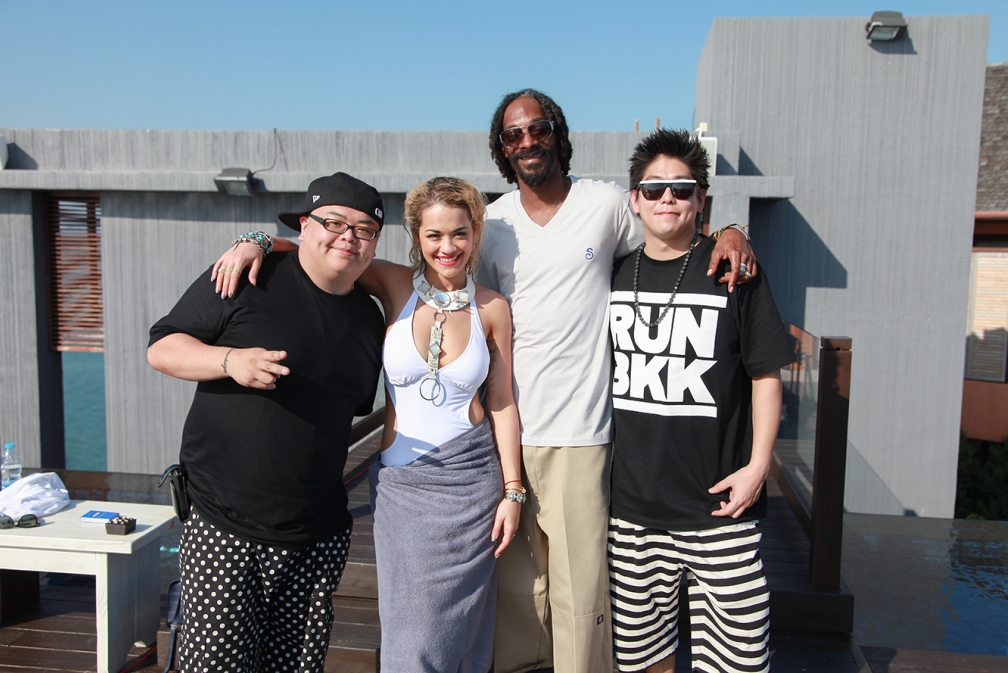 CLOT x Ralph Lauren for Year of the Ox collab