More often than not we get asked for record shop recommendations that are unique and cultural over popular and electronic music specific. So we tapped into nine different cities in Asia, found an artist in each whose opinion we respected and had them spill their secrets. Here is what we found: 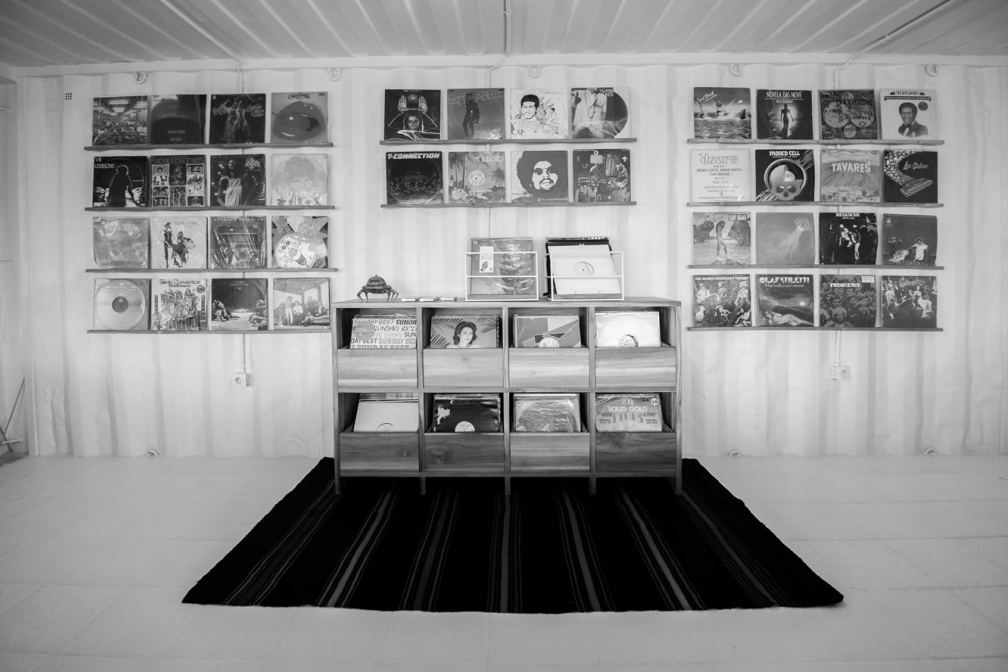 I imagine it’s very tough to run a record store in Asia due to high shipping costs from Europe. Vinyl in bulk weighs a small tonne then you have customs offices with their hands out. Bali’s recent little gem is a store called Badung Digs, owned and run by island resident collector and selector DJ Seabass (Sebastian Siahaan). You can find it in the middle of a rice field in Kerobokan and it’s a converted shipping container with an adjacent coffee shop called Tuck & Trap where they have live DJs, musicians and synth nerds jamming all the time. 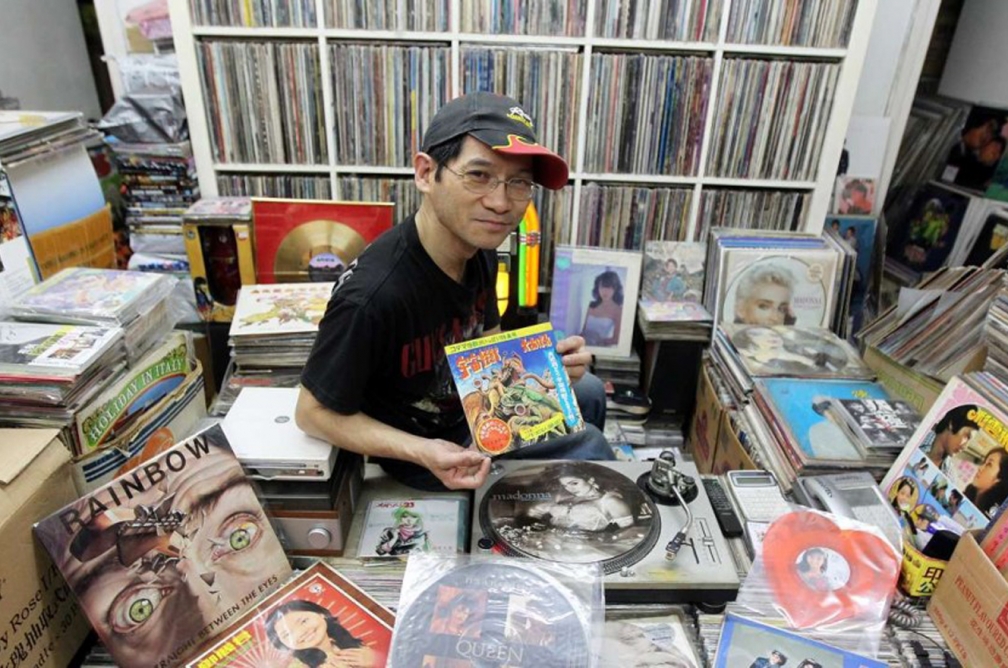 There's one guy who has a record collection he stores in a warehouse/shop in Sham Shui Po, Kowloon. Aside from HMV, the only other legitimate record shop in HK is White Noise Records, which carries a quality & eclectic but limited selection. If you want to go digging, Paul is the man.

Paul is a friendly, humble and vinyl-obsessed Chinese guy who is well known amongst the DJ and audiophile community in HK. He is one of the few people keeping the passion of wax alive in the city - the other notable mention would be Roy Malig who provides upfront and classic releases to a lot of DJs in HK, and if I'm not mistaken, he has been doing so for around 2 decades.

Paul's shop is Sham Shui Po, and he has an acclaimed few hundred thousand pieces that make up his collection. He is only reachable by phone, and you simply fix up an appointment to spend whatever desired amount of time to rummage through boxes and piles of boxes of records.

You'll mostly come across used records, occasionally a few that have hardly been used; you'll find anything from classic soundtracks, 70s/80s unknown disco, to old Canto-pop and miscellaneous Asian (a lot of rare Japanese) funk & disco. DJ Nu-Mark of Jurassic 5 was just one of the many who helped letting a lot of other DJs know about discovering Pau's vinyl paradise. 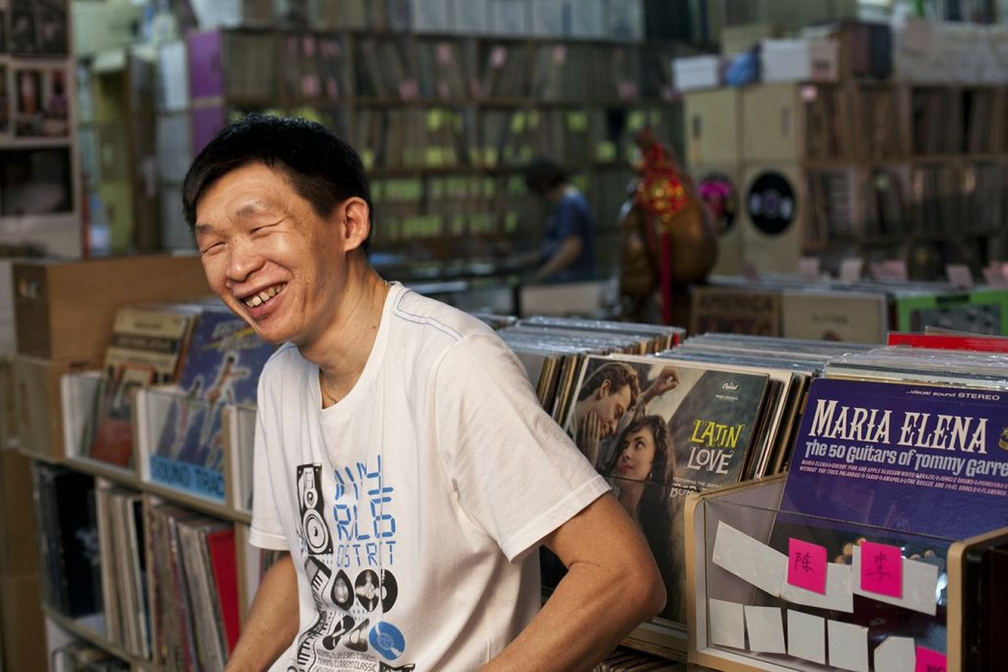 The owner, Mr. Ong Chia Koon, holds a full-time job as a carpenter during the day and opens up the shop (warehouse would be a better word) during the weekends (Fridays to Mondays). The astounding fact is that he holds an approximate 50,000 records and more, and genres range from classical, folk, rock, new wave, disco, funk, cinema sound effects and even opera. It has been around for approximately 11 years, sometimes vinyl collectors even give Mr. Ong their collection without taking any money! The owner is courteous and such a nice person, he even gives you a bottle of water straight from the fridge when you stay there for long periods.

Note: It has a $5 bargain second hand records section, specially dedicated to electronic dance music. You have to prepare at least 5 hours of free time to go through the section and find the gems. That's how I found this Jeff Mills record.

The folks from #vinyloftheday organised a mini documentary about Mr. Ong and his shop, watch it below. 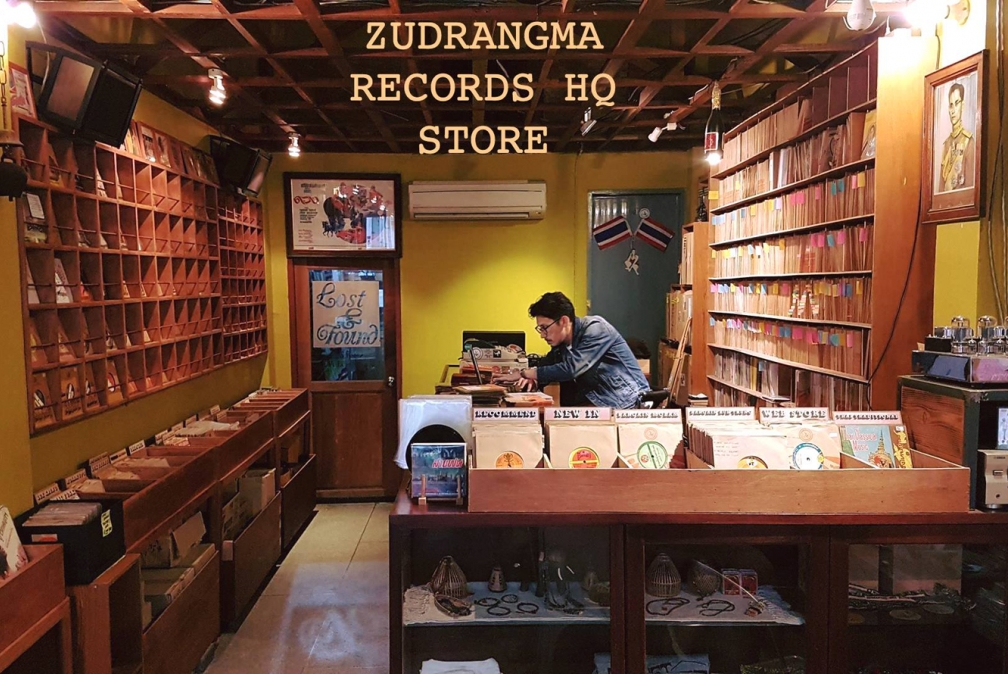 You can get some really unique records here and it has a good selection of very different music like world, African roots, Thai funk and Molam. It’s owned by Nat (DJ Maftsai) and he knows the story about every used record that he sells and he goes outside of Bangkok to find really rare records. Once I brought Peggy Gou there and he showed us some really cool music from the past.

Note: ZudRangMa is located next to Studio Lam, one of Bangkok's coolest and most unique drinking dens. 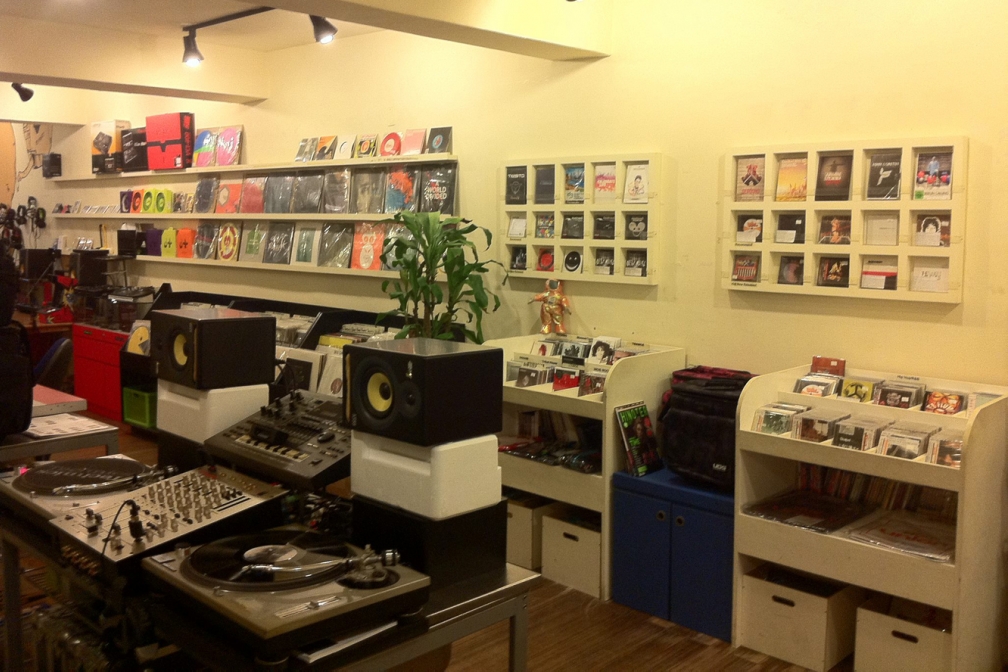 What you’ll find there: house/techno/electronic

I used to go to Species Records quite a lot, mostly as a hangout place with friends. It's a very welcoming place with turntables to listen to records prior to buying (a rarity in Taipei) + turntables and a mixer to practice DJing (in exchange for a small fee) for those who don't have the gear to practice at home. A-Tao the owner is a well-respected techno DJ who shares his passion with young customers (you can see him teaching young kids how to DJ most of the time when you go to the shop). The record selection at the shop is a bit limited, due to the lack of demand for house/techno vinyl in Taipei (most DJs play digital), but there are regular arrivals of 2nd hand records, often from former Taiwanese DJs who decided to get rid of their vinyl collections. So depending on luck, it might be possible to spot some gems for a reasonable price. 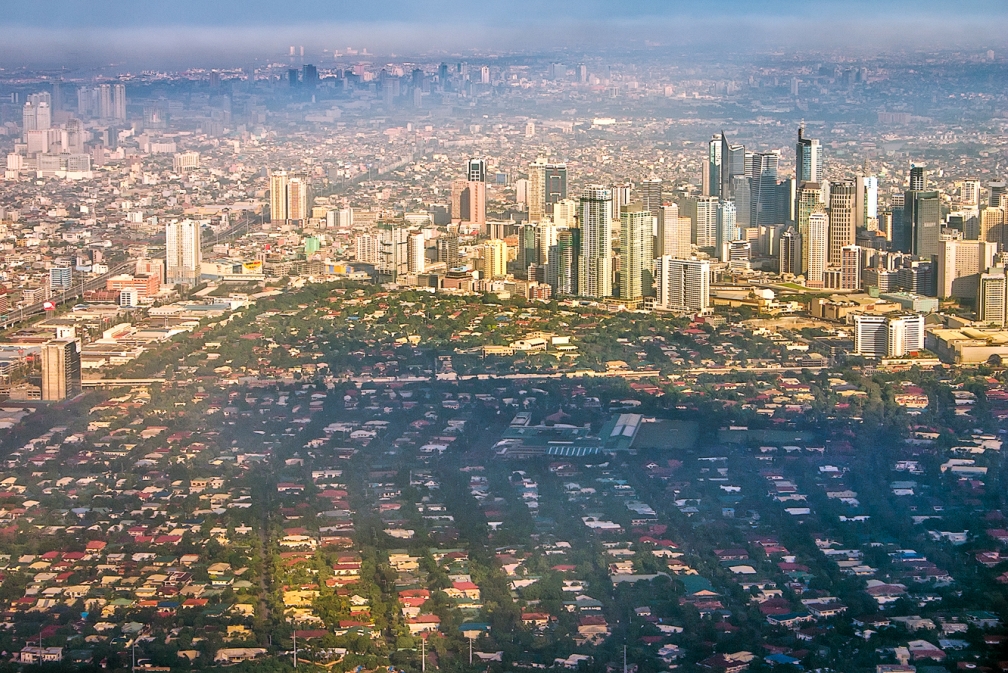 It’s actually a hi-fi store in a “dodgy” mall that sells rip-off electronics, clothes and other stuff, but they seem to have stocks of records sent to them sporadically from unknown sources that they keep and sell but don’t really tell anyone. Genres are random and you really have to dig here but that’s the beauty. 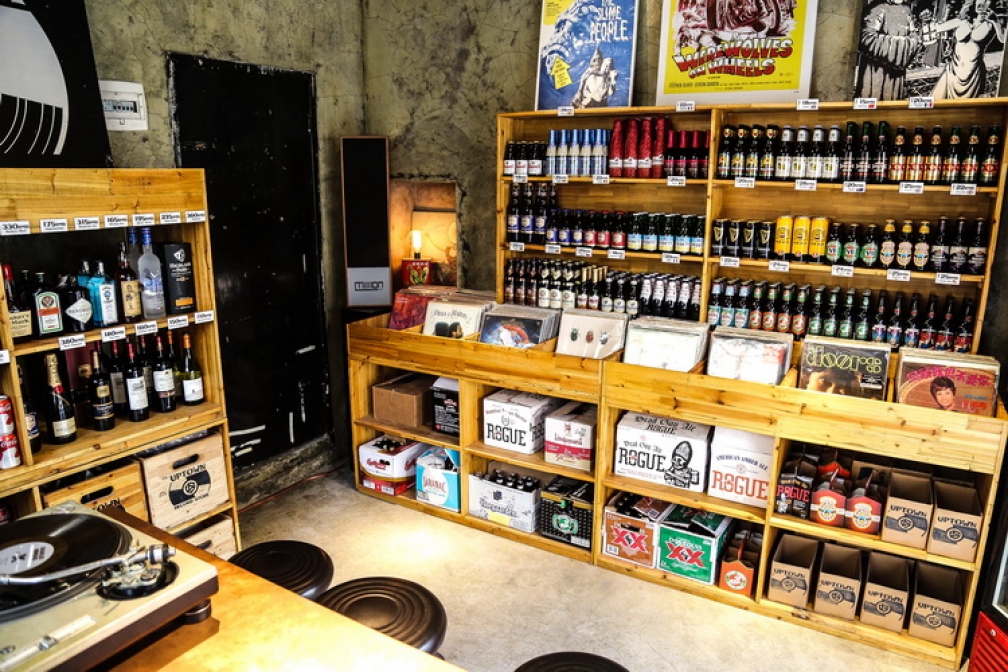 via Sam aka Mau Mau
Manager/booker at Elevator, Shanghai

Shanghai isn't a place people think of for record digging - prior to China's opening up in the 80's, a lack of turntables or access to non-sanctioned entertainment meant vinyl plants nearly all closed down, and when popular music returned the industry had moved on to tapes and then CDs - meaning the wealth of records (and vinyl culture) that can be found in countries like Korea and especially Japan simply don't exist here.

Which makes Uptown Records, nestled in a dank basement shared with an underground arts collective (Basement6), music producers and screen printers like L~n and Idle Beats, all the more an oasis. Sacco Vanzetti and his wife Sophia have been tirelessly hunting down records to keep the culture growing here for years - first at a distant port where barges with Japanese throw-away stock would briefly dock, more recently back home in California and in Japan since the barges sadly stopped appearing. He's also had a sharp eye for DJs and collectors parting with their wax - recently picking up a ton of great vinyl from one of Shanghai's biggest diggers, Santo Chino, who ran the Same As It Ever Was and Space Out! parties. Always in the store and knowledgeable somehow about nearly every record across genres, Sacco is the kind of guy who makes you forget how many hours went into digging, even in a dank basement on a nice day. Expect rock, punk, indie, house, bass and techno with a strong selection from locally-based and related bands, producers and labels, and say hi to Seamus the dog 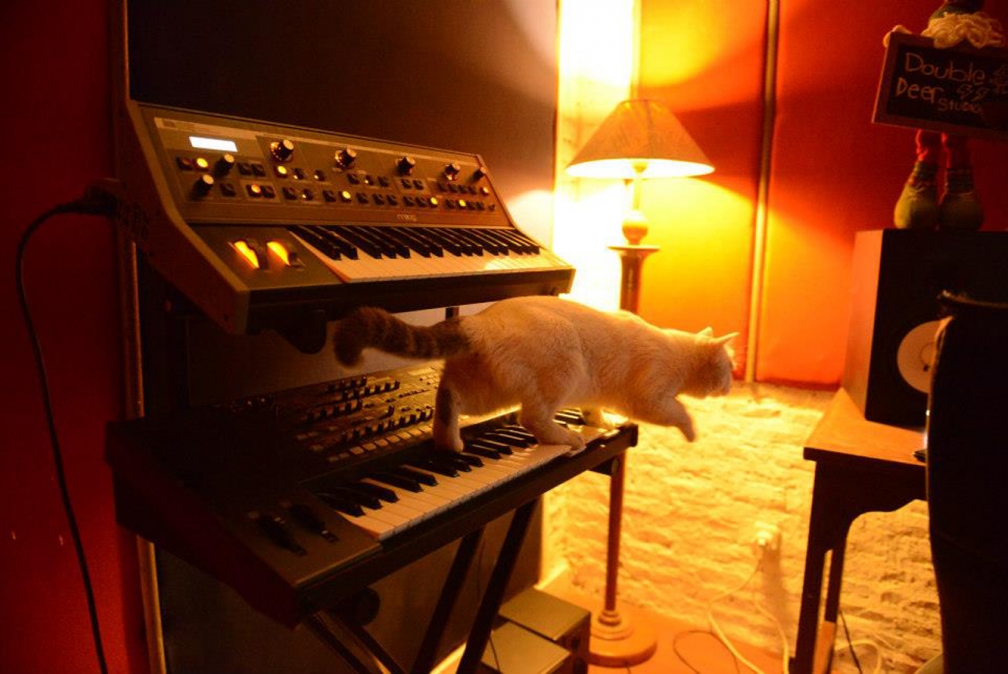 What you’ll find there: Any genre from nu, disco, house, techno, electronic music but more about underground music 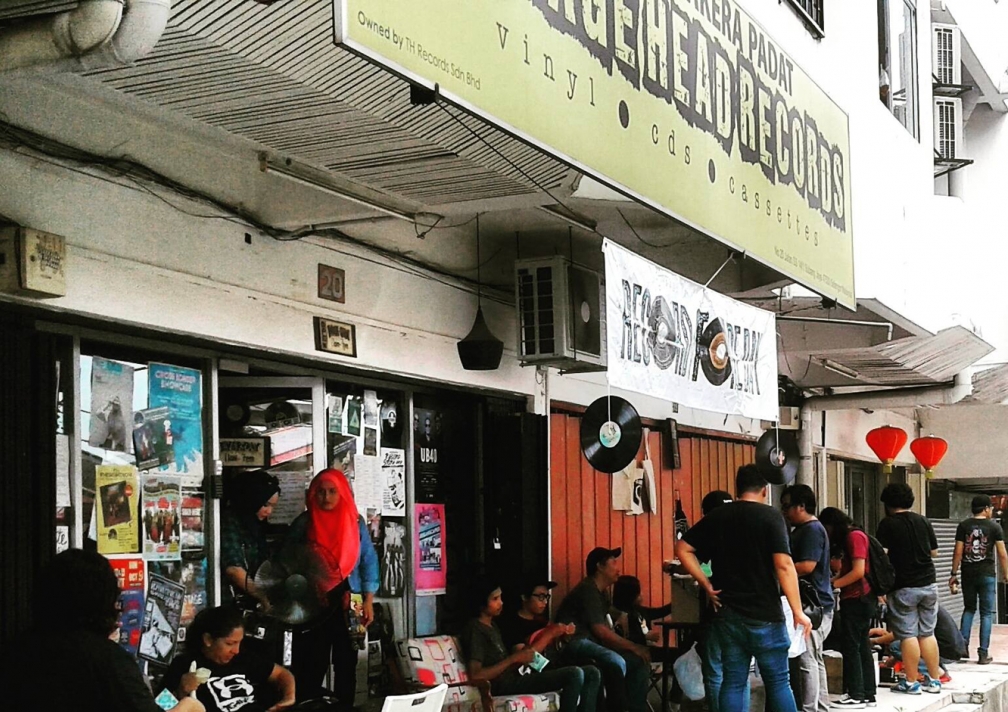 What you’ll find there (genres/artists): punk, indie, funk, jazz, reggae, soul and the occasional electronic music record. The vinyl culture here is more focused on other alternative genres. The selection is pretty scarce for electronic music in KL, so us vinyl collectors tend to get our fix online.

A family friendly record store nestled in the housing suburbs of Subang Jaya. The shop is run by some of the friendliest people I know. Record shops are usually filled with pretentious music elitists who always talk down to you but this shop has friendly workers who are always keen to talk music with you and is always very warm and welcoming. The shop throws parties with live bands every once in a while, so it’s an amazing place to hang and congregate. It opened in August 2014 by a Singaporean couple who migrated to Malaysia (Mohd Radzi).