It’s no secret that artists are known for incorporating hidden messages in their work, from The Beatles’ track ‘Lucy in the Sky with Diamonds’ spelling LSD to the backmasking of Missy Elliot’s "flip it and reverse it" refrain on ‘Work It’. Whether they're sneaky or not-so-subtle, hidden meanings in songs have captured the imagination of artists and intrigued their fans.

Discoveries in the late '90s/early '00s showed a trend of musical Easter eggs contained within tracks released at the time. Using a spectrograph program, the audio signal frequency can be transformed into a visual representation, showing the sound as a colourful yet blurry mess. But as fans discovered, with some tweaking, particular tracks reveal images purposely placed there by the artist.

One of the most prominent examples of this is in Aphex Twin’s track ‘∆Mᵢ⁻¹=−α ∑ Dᵢ[η][ ∑ Fjᵢ[η−1]+Fextᵢ [η⁻¹]]’ - often referred to as ‘Formula’ - from the B-side of ‘Windowlicker’. Using the program ‘Metasynth’, AFX was able to embed an image at the end of the track. From 5:27 an unusual noise begins. With Twin being known for his abstract sounds, most listeners would not think twice about the noise, but those who looked deeper found the devilish image of a grinning face.

In 2001, an artist by the name of chāosMachine posted online that he had made this discovery within Twin’s song. Whilst using a Winmp plugin that produces a rolling image while the music is playing, the spectrogram displayed a distorted face. The artist coined the name ‘demon face’ for its sinister expression.

It wasn’t until Jarmo Niinisalo saw this discovery and was naturally intrigued to attempt to make the same discovery when the image was refined.

As Jarmo recalls, it was the summer of 2001 when he stumbled across chāosMachine’s demonic findings. As he also owned the ‘Windowlicker’ EP he thought he would attempt to recreate the same findings.

Using a program called Spectrogram, he followed the steps and found himself staring into the eyes of the ‘demon face’. An amazing encounter, however, Jarmo wasn’t satisfied. “Why would the good ol’ Twin have added a ‘demon’ face into one of his tracks?" he remembers pondering. "I mean, the man does have a weird sense of humour, but I always thought demons were more up Boards of Canada‘s alley.”

With this in mind, he decided to continue playing around with settings to alter the appearance of the face and after some more twiddling, the mystery was revealed. The face was supposed to be displayed on a logarithmic frequency scale, instead of with a linear scale. By applying this, it completely changed the appearance of the image. Jarmo recalls: “Why, it was none other than the Twin himself all the time, complete with his patented grin! Richard D. James had actually embedded his own visage into the audio data of one of his songs.”

Jarmo also believes that the complex title of the track (‘∆Mᵢ⁻¹=−α ∑ Dᵢ[η][ ∑ Fjᵢ[η−1]+Fextᵢ [η⁻¹]]’) could be a clue to the embedded image as the formula deals with Fourier Transform, a method that converts a signal into a frequency representation and back again.

On the same EP but on the A-side — ‘Windowlicker’ — Jarmo found yet another spectrogram image. If you go right to the end of the track around the last eight seconds, you can hear a high-pitched cry. Run this sound through a spectrograph and it will become clear – the noise creates a huge wave-like swirl as Jarmo found. 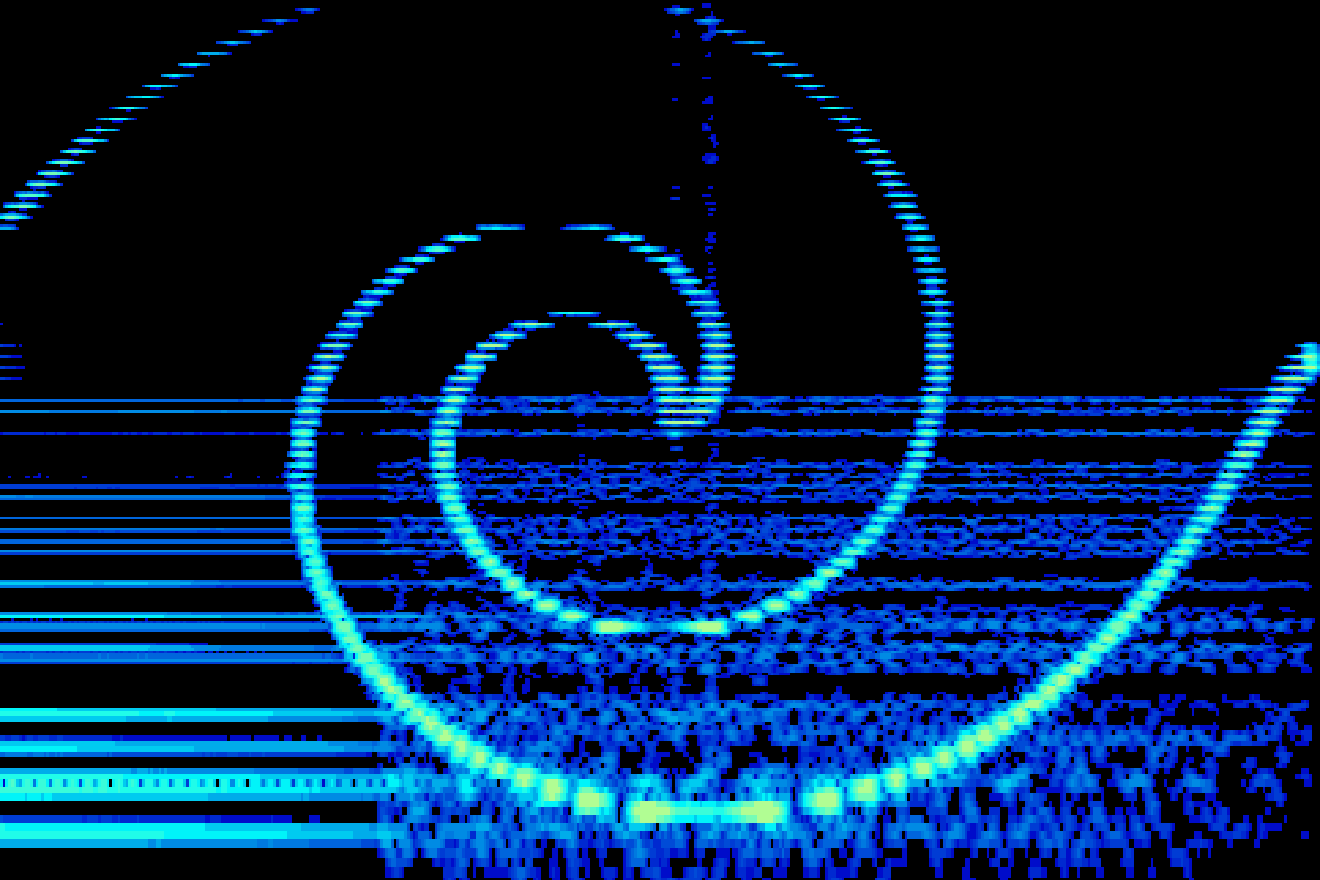 The more Jarmo researched spectrograms, the more it became clear that it can be harder to hide images within audio rather than it is to uncover them. As the image alters the sound spectrum the noise they create is “distinctively ethereal, high-pitched shimmering sound that pushes through in the mix.”

Proving how it can be possible to listen out for the images as they often are discordant, Jarmo developed an ear for them. After hearing a similar sound to ‘Windowlicker’ on Plaid’s ‘Rest Proof Clockwork’ album, he followed similar steps to reveal that the sound he was suspicious of ‘3recurring’ was indeed another hidden image. This time it showed a mural running through the track of a continuous image of threes. The image links back to the cover art of their previous album ‘Not For Threes’ and, of course, the title of the track itself. 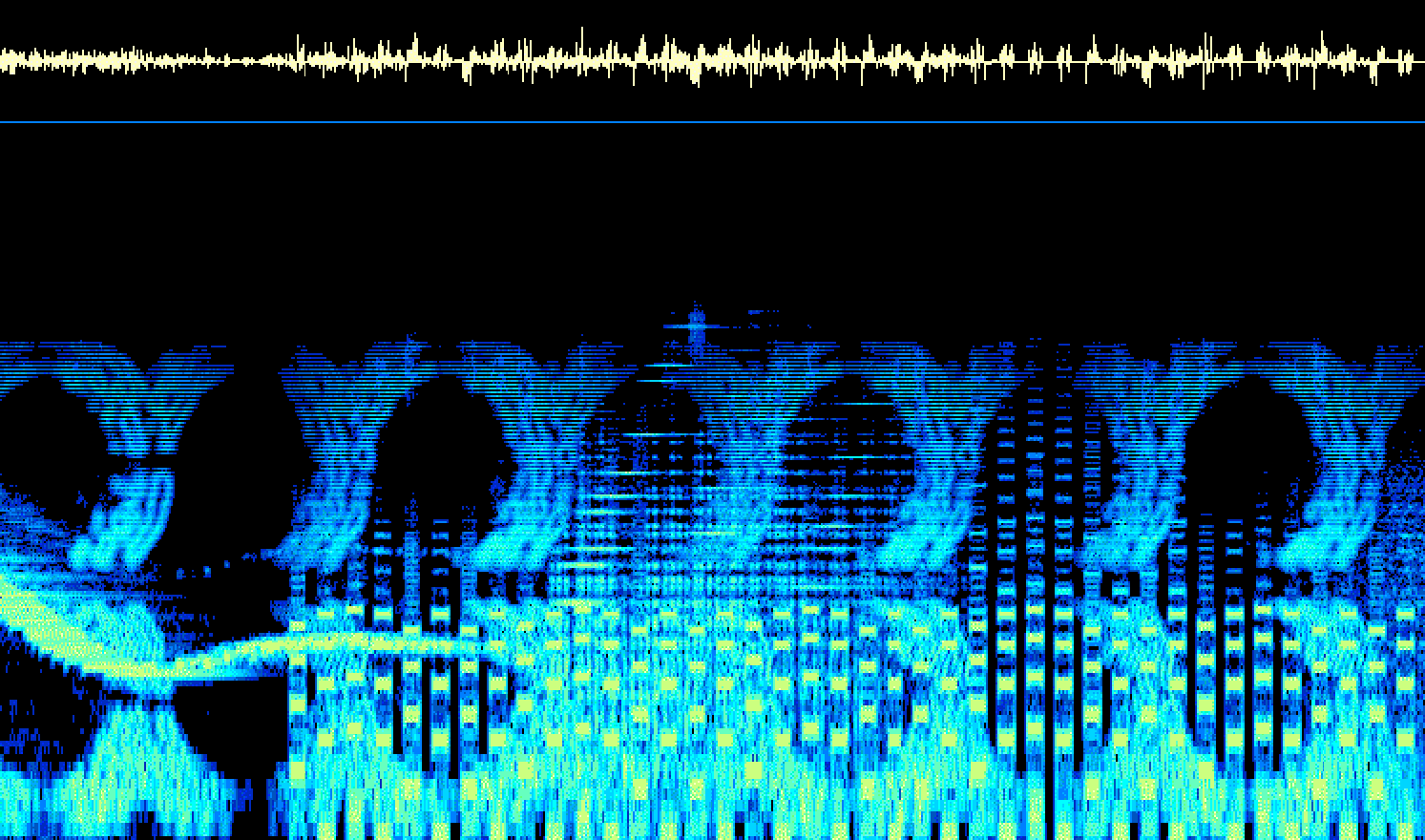 In 2006, Billy San posted his own discovery on an online forum his own discovery. “There is a track (last track) on Venetian Snares's album ‘Songs about my Cats’, it is called ‘Look’, it is a very dense, noisy and unlistenable track, though once you see it you understand why it's like that,” he wrote. The track's "unlistenable" (depending what you’re into) sound is an effect of Venetian Snares purposely editing the spectrogram to include an image of his cats. Once again, the album title is a huge clue for this musical Easter egg.

After being tipped off about this spectrogram image, Jarmo attempted revealing the cats of ‘Look’ and got a similar result: “It was just a matter of hunting track down, running it through the spectral analysis program and snapping a screenshot.” 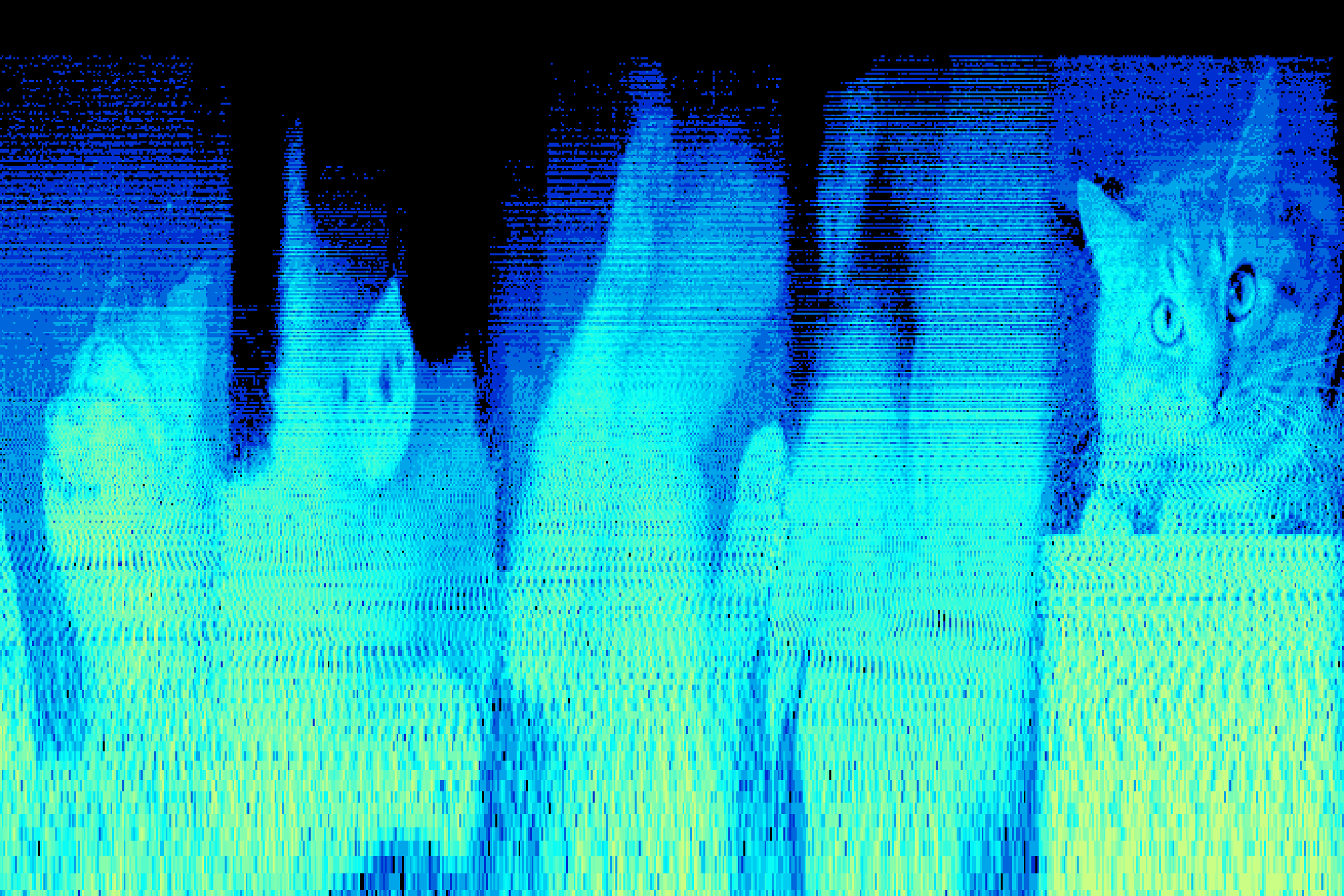 The electronic music scene hasn’t been the only one to incorporate this trend, however. Nine Inch Nails used an image in the spectrogram of ‘My Violent Heart’. Unsurprisingly, there is once again a hint of the image in the album cover art. In this case, the artwork for ‘Year Zero’ - the album that the track features on - portrays an eerie shadow of a hand coming out of the blue. The spectrogram of ‘My Violent Heart’ shows the very same hand, as spotted by an internet user named Omegatron. Other methods of hidden message aren’t unusual for Nine Inch Nails: if you fast-forward the song ‘Erased, Over, Out’ the song screams out the words “erase me”.

These audio made images have little research on them apart from the odd blog post here and there. This includes the work published on a defunct blog called Black Coffee Spirit. The Tumblr page managed to discover hidden images inside the music of Polytron’s Xbox Live Arcade-exclusive puzzle game Fez. The soundtrack includes a bunch of random images within its spectrograms, spanning the first footprint on the moon to Salvador Dali’s painting Crucifixion. 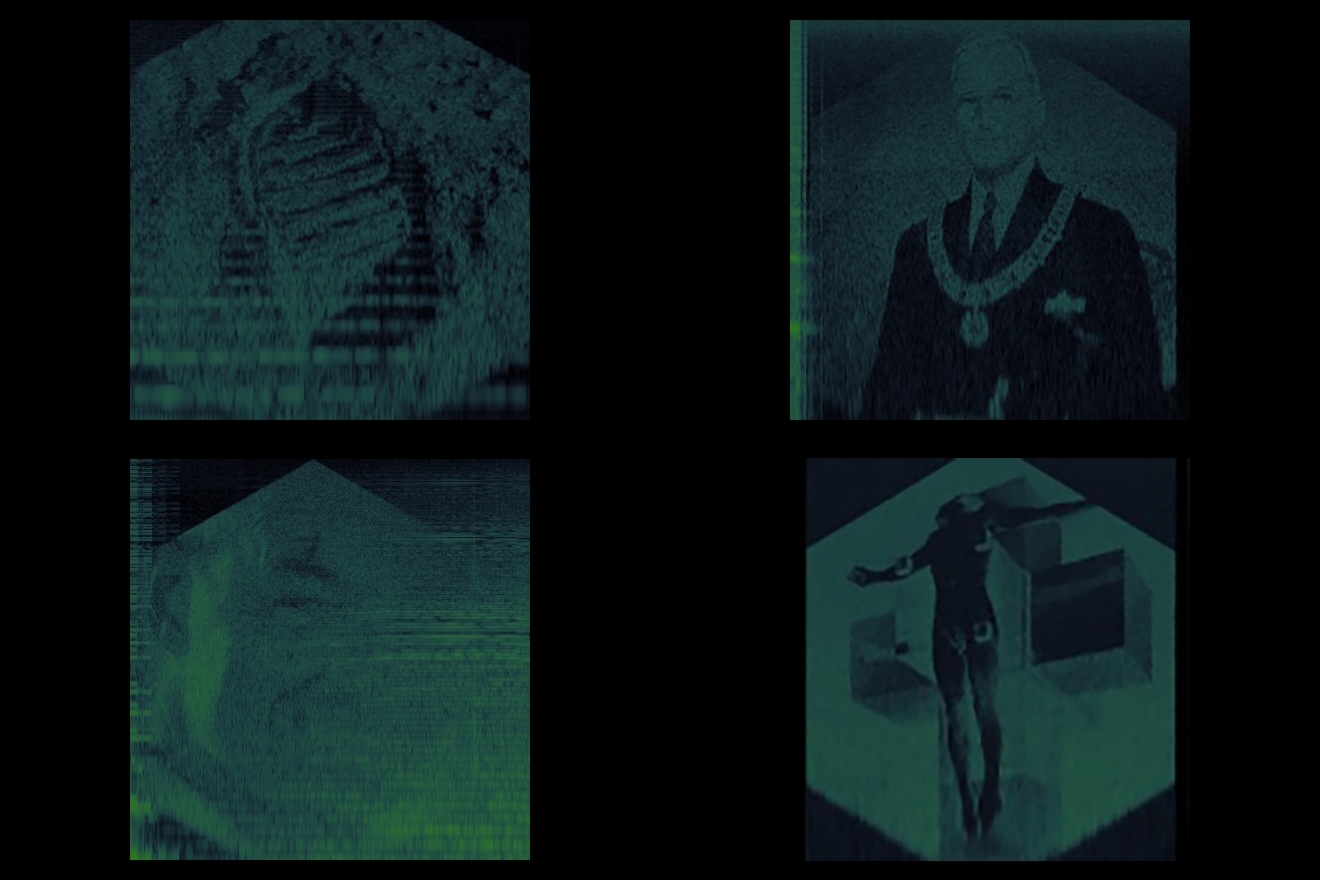 The technique is seemingly rare, with a lack of examples and knowledge on the subject, but for all we know plenty more songs could be using steganography, we just haven’t searched hard enough. Why not get your investigative hat on and try and hunt down some spectogram art? Or if you're feeling creative, you can keep the culture going by embedding images into audio with programs such as image synth Coagula, or the program Aphex Twin used, Metasynth.