South Koreans are well aware of just how unpredictable their Northern neighbor, the world’s most isolated and totalitarian country, can be. On Memorial Day in Seoul, air raid sirens blare across the centre of the city, which has some fearing the worst: a missile attack from Pyongyang. Thankfully, it turns out to be a drill.

Just 50 miles north of the city, things can get even more tense. The Demilitarized Zone between North and South Korea is, despite its name, the most militarised border in the world: 160 miles of checkpoints, bases surrounded with barbed wire and on the South Korean side, camouflaged soldiers in their late teens and early 20s manning 200 guard posts as part of their national service. There may be as many as 800,000 landmines in the two-and-a-half mile-wide No Man’s Land, and its varied terrain has become an unlikely de facto nature reserve, home to endangered species, from the Korean tiger to the Asiatic black bear.

Just a few kilometres away from the border, though, in Cheorwon Province, something else rare is stirring: The second DMZ Peace Train Festival. The main site, just outside the zone, has three separate stages featuring national and international acts and 8,000 people – mostly young Koreans in see-through rain macs – dancing to hip hop and electronic music. The festival is the brainchild of Glastonbury booker and Great Escape Festival founder, Martin Elbourne, conceived “partly as a bit of a joke” after he visited the DMZ alongside European promoters and deciding that it would make a great site for a festival.

“It sort of naturally happened,” Martin explains. “Over the years I’ve been involved with lots of things – you come up with ideas and often they don’t happen. The governments of Seoul, Cheorwon Province and South Korea (and us) thought that the timing was really good. The weird thing was when we first thought this up the situation with North Korea was much worse. So since this festival began last year, you could almost say we’ve created peace!”

It’s the limited-capacity events inside the DMZ itself that are the most surreal. On Thursday night we visit a stage approximately five miles from the main site right beside a checkpoint and the ruins of a former Korean Workers’ party Headquarters called Nodongdangsa, where the North Koreans are said to have tortured and executed insurgents when the area was in their hands. Here, a brass section plays versions of Korean military songs in a big band style with eight masked dancers in black outfits behind them.

On Friday afternoon, we cross the military checkpoint to visit Woljeong-ri train station, the last train station located at the northernmost point of South Korea. There’s a tunnel here dug by North Korea which we’re instructed not to take photos of. The station has long been abandoned and the train tracks – as well as the train carriages themselves – are in ruins. The main reason we’re here, though, is to see legendary Velvet Underground founder John Cale, alongside Korean musicians, perform a few songs on a grand piano, which around 250 people sit down on foam cushions to listen in silence to. The atmosphere is slightly eerie, with an army presence everywhere. 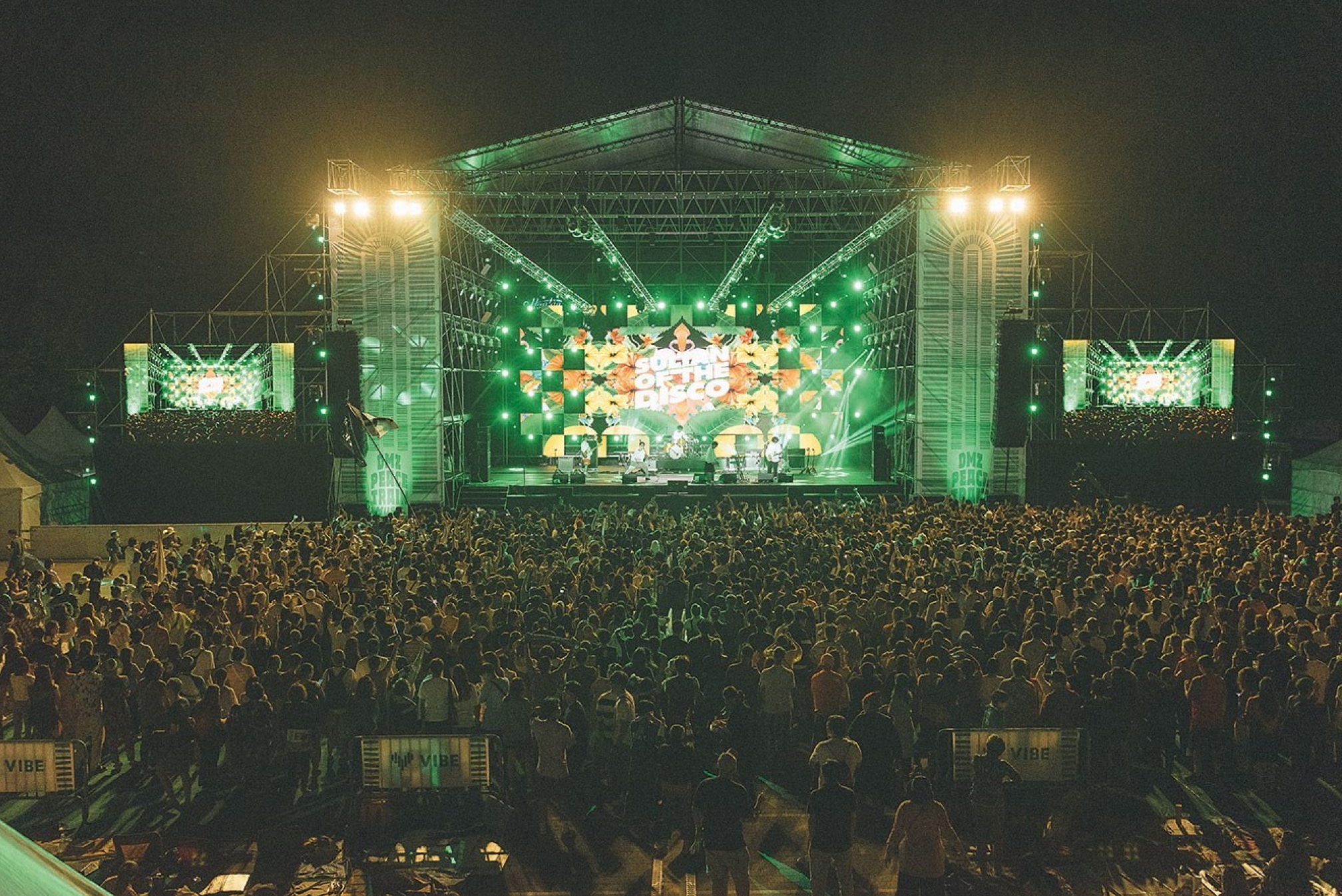 The weekend is devoted to the main festival site, though the inclement weather is so relentless that it even leaks through plastic coverings sheltering people in a nearby 7-Eleven. But despite the conditions, spirits are high, and the crowd are extremely polite: hushed silences between watching bands is a typical mark of respect, people pick up their litter after themselves and there doesn’t seem to be a voice raised in anger or indeed rowdiness the entire weekend. Perhaps because of South Korea’s compulsory military service for men aged 18–28, the demographic is unusual. Women seem to outnumber men by as much as 8:1 in the mainly 20-something crowd; there are smatterings of small children and toddlers too, especially towards the back of the arenas where families relax on blankets to watch bands perform, or visit the funfair with its bumper cars, pirate ship, horse carousel and swings.

Seoul Community Radio – an underground radio station which is the city’s answer to NTS or Rinse FM – hosts one of the smaller stages at the festival, but certainly the most dynamic. Right opposite the decks and facing the DJ is a water fountain, which attracts a fair few ravers already soaked from by the heavens. On Friday evening, the station asks Mixmag if we want to do a DJ set, and a for a short while the Korean DMZ rings to the sounds of an iPad playing Egyptian street music.

A bigger draw are UK-based group Fujiya & Miyagi, with their fusion of dance, krautrock and indie. They’re a bit of a slow-burner but the crowd warms to them with every song, waving various flags including a rainbow one saying ‘Free To Love’ in English and Korean. Towards the end of their set, a western girl in a yellow hoodie grabs hold of a water gun and proceeds to spray the crowd, who erupt in smiles.

In terms of overall spectacle and presence, Seun Kuti and Egypt 80 are the standout performance of the whole festival. Seun – the song of legendary afrobeats musican Fela Kuti – takes to the stage wearing a traditional blue and gold patterned Nigerian outfit, flanked by two backing singers, a drummer with African and Western drums, and a guitarist. His hour-long set goes down a storm: down in front, kids are pulling their best African moves, some girls even twerking to the hypnotic beat.

One festival isn’t going to undo half a century of political tension in this part of the world, but at least it demonstrates a happier vision for the DMZ than guns and walls and landmines.