Isamu Yamamoto has been electrifying audiences worldwide since he burst onto the Freestyle skate scene as a fresh-faced fourteen-year-old. In 2017 he won the World Freestyle Round-Up Championships, where his simultaneous use of two boards blew-away the panel judges – making him the first winner ever to use two skateboards at the same time. His sensational skills videos have generated some serious heat over the last year or so, and his graceful talent has seen his moves likened to those of a dancer... Only Isamu manages to pull off his slick techniques while gliding across the floor on between four and eight wheels!

His viral clips haven't been lost on the dance community either, with influential brands such as Defected Records sharing his exploits via their Facebook page, garnering almost half a million likes in the process. We felt compelled to reach out to the young prodigy to discover more about his background, and – considering his flair for movement – to learn more about how music factors into his skating routines. We were absolutely thrilled when he asked us to help him source some top-drawer electronic music to accompany an exclusive video, and were, of course, more than happy to oblige. 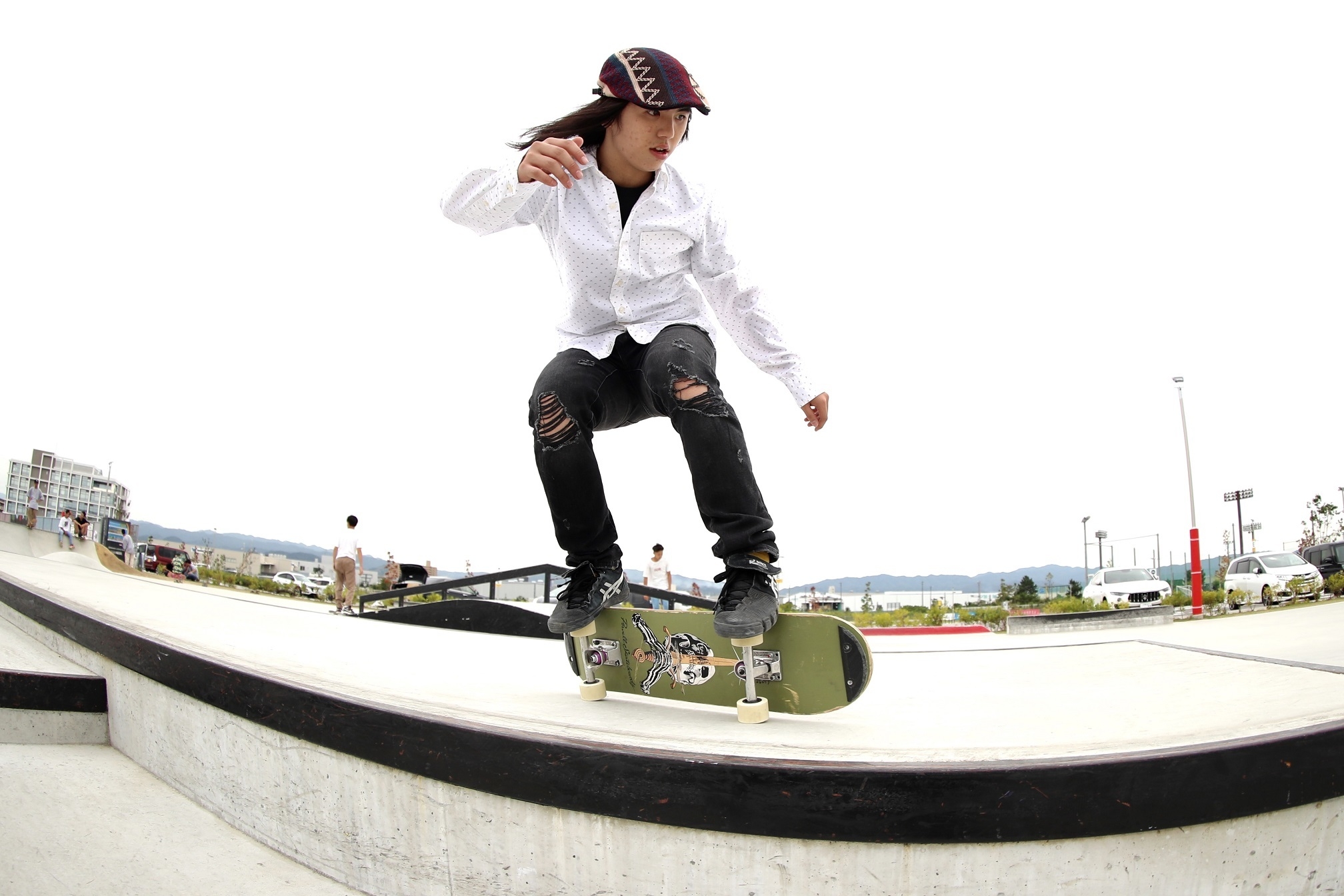 Before we got to grips with the music, we wanted to know more about Isamu. Still only 17 years old, he lives in Otsu City in Japan. He's been skating for nine years, and was inspired to get started after his father introduced him to videos of legendary skate idol, Rodney Mullen. “My father found one of his skating videos watching Youtube and showed it to me. It was so amazing that I was deeply impressed and inspired by him,” said Isamu, adding that he quickly took to the sport after being dazzled by what he saw. Showing a natural flair, and thanks to committing three or four hours per day to refine his craft, it wasn't long before he began to compete and win trophies at international level.

His short career is already full of highlights, and when asked to share some of his favourites, the 2017 World Freestyle Championship was his first thought, “it is when I won the pro title for the first time,” he said, before adding that his most memorable competition experience was finishing in first place in the kid's category of the MEGANE Cup. His success in the sport has helped generate sponsorship deals with the likes Bang & Olufsen, Toyota Tsusho, and Insta 360, as well as skate partners Powell Peralta, Bones Bearings, JMKRIDE, Bustin, Good Skate Inc, All One, and Decomposed. Discussing the skaters who inspired him the most, he tells us “Rodney Mullen, Kilian Martine, and Lotfi Lamaali are my heroes,” adding that his favourite Asian skaters are Go Miyagi and Jason Park.

When not spending time on a board, Isamu's hobbies are perhaps not too dissimilar to those of many other teenage boys, “I love to catch insects, make stop-motion animes, draw Mangas, see action figures,” he said, before adding, “...and sleeping.” 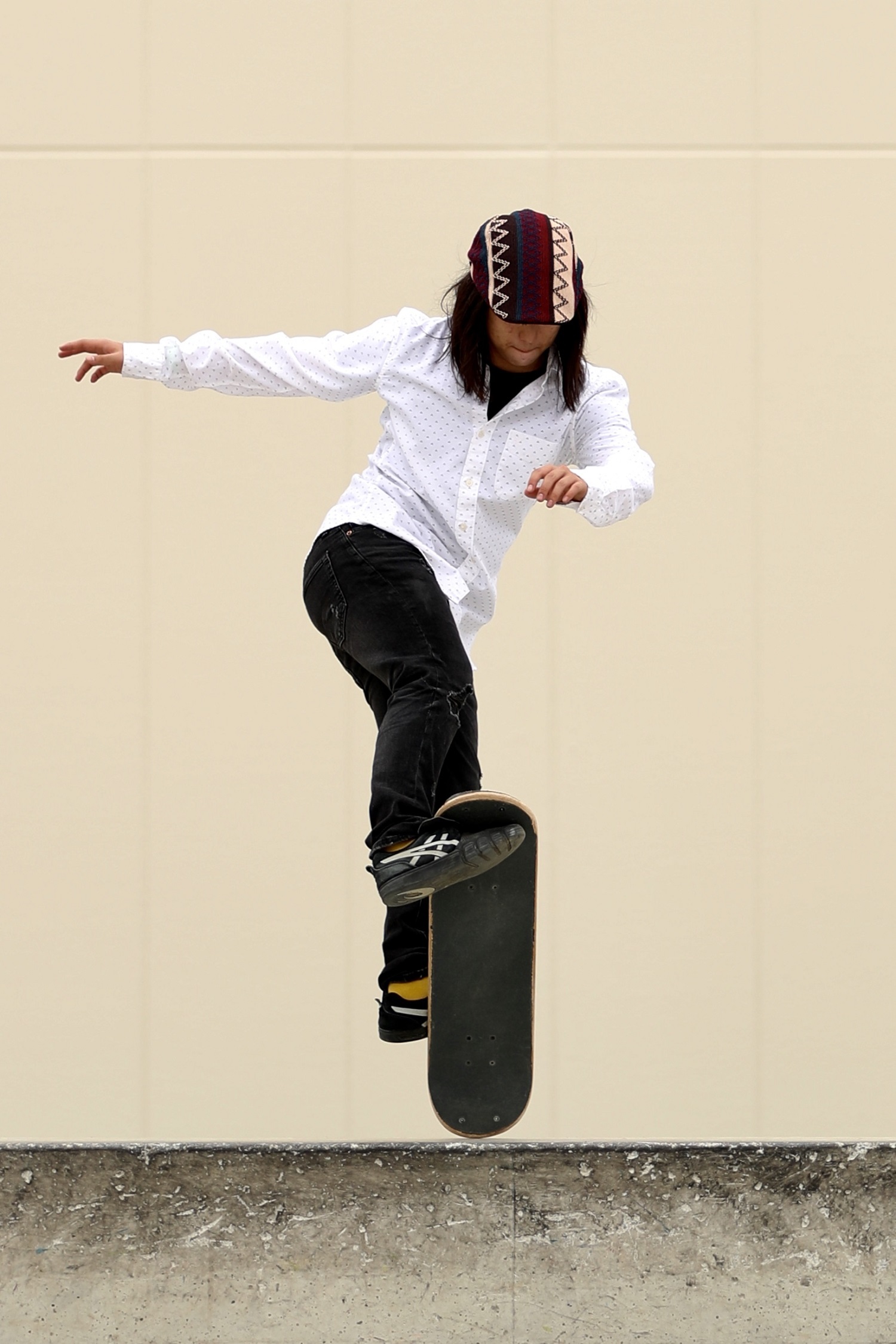 The delayed Tokyo Olympic games, now scheduled for 2021, will include skating for the very first time. Unfortunately, the 'freestyle' category was not chosen, meaning Isamu won't be able to compete, but the addition of the 'street' and 'park' disciplines have helped invigorate enthusiasm for the sport. “In Japan, skaters are increasing after skateboarding was decided to be in the Olympic games. Many young people and kids started skateboarding, especially in the quarantine time.” Indeed, before the COVID-19 outbreak took hold, Isamu had seen the skate explosion take hold across all of Asia. “I have travelled to 5 countries in Asia,” he said, “it looks that skateboarding is getting more popular in many countries. I had a freestyle skate session with Chinese freestylers in China last summer... Only in Korea, long-boarding is more popular than normal skateboarding.” The increase in numbers taking up skating as a serious sport brings with it positives and negatives, notes Isamu. “The good thing about it is that many kids started it (skating) as a fine sport. The bad thing is that selfish street skaters ruin the skate spots and the manager of the places banned skaters from skating there – including freestyle skaters – who never cause trouble!”


Unsurprisingly, the pandemic has put paid to many tournaments globally, meaning Isamu and others have missed out on competition this year. “The World Freestyle Round-Up in which I participate every year was cancelled, and all demos are postponed or cancelled,” he told us. When the cloud finally passes and travel becomes less restricted, he tells us he's excited to continue his jet-setting schedule, "(I would like to travel to) France, where I wanna meet Lotfi Lamaali who is a longboarder I look up to. I haven’t met him, yet. I also wanna go to Italy because it will be fine to skate seeing the old heritage or buildings.” 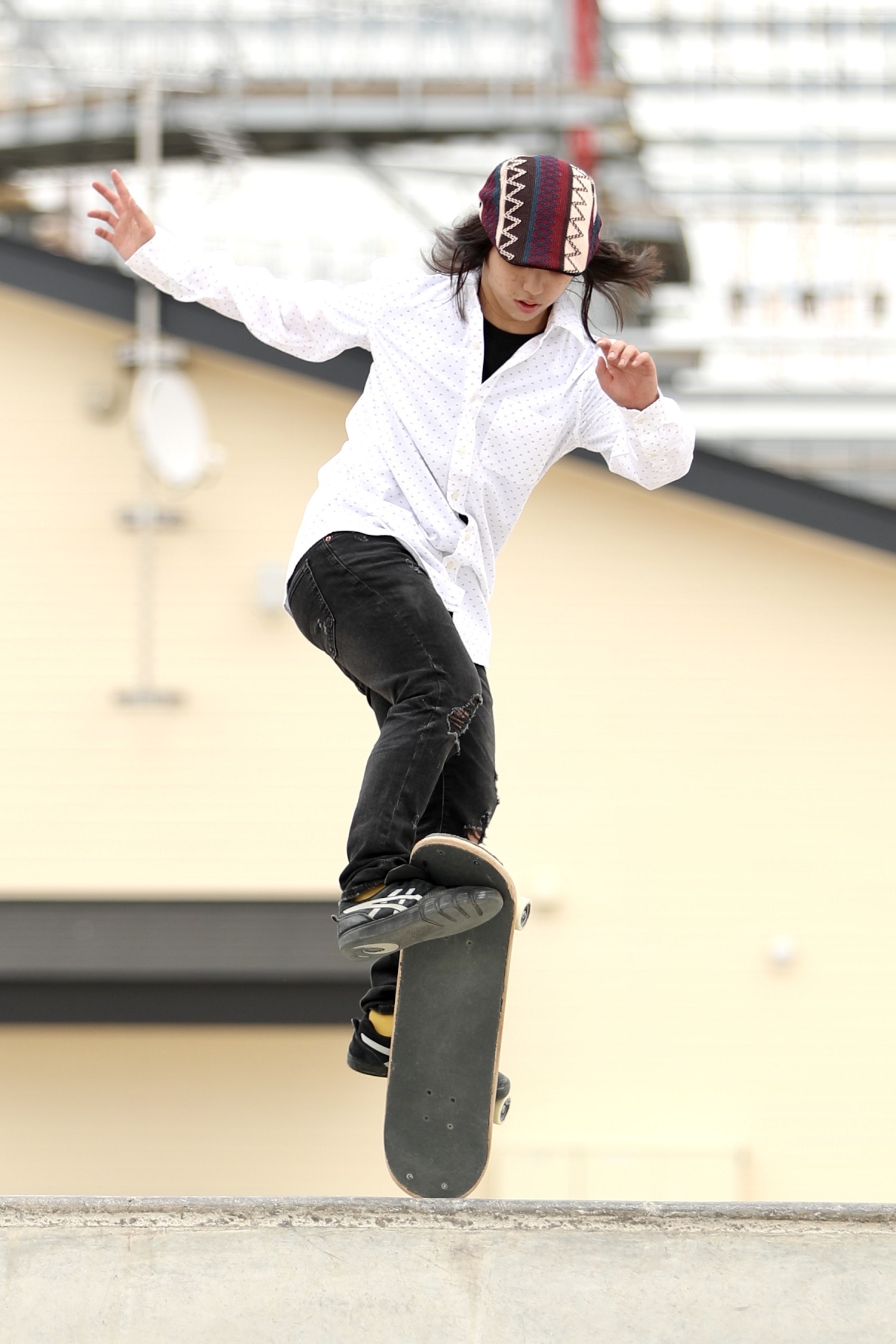 On the subject of combining music with his skills videos, Isamu feels that energetic music works best. “I like to use up-tempo music,” he said, “it makes the mood of the skating liven up!” Though his personal tastes veer more towards rock and indie music, he told us that he was very keen to collaborate with electronic music producers to help introduce fans of the music and the sport to the two respective worlds. “I want you to recommend some good music for my skateboard videos,” he told us.


Well, Isamu Yamamoto, your wish is our command! Following this hugely appreciated invitation, we set about contacting some of the excellent labels we know who we hoped might want to help facilitate. An obvious choice was that of UK-based Wolf Music Recordings, who as well as releasing titles from deep house heroes such as Fantastic Man, Session Victim, Bicep, Greymatter and more, also produce an impressive line of urban apparel which we consider to be skate-appropriate. As if planets were colliding, they also happened to be preparing to release an excellent EP from New Zealand duo, Manuel Darquart, containing a wonderful track entitled 'Parkour!' which we were particularly keen to use to accompany Isamu's skills and tricks. Isamu graciously supplied us with an unedited video of him doing what he does best, so we set to work cutting it to the tight new music. Just as Isamu's style offers a uniquely contemporary take on the old-school freestyle skate form, Manuel Darquart's track presents a delightfully modern twist on a retro, proto-house sound. Combining the music with the footage felt like synchronicity itself – the heavy electro-fuelled drum track, bouncing bass and uplifting synth melodies blending perfectly with Isamu's effortless flourishes. You can check the video for yourselves right here:

While we were over the moon to help expose the young skate icon to the bountiful world of electronic music, Isamu himself hoped that the alliance would in turn “show freestyle skateboarding to the people who love music and let them know this fascinating sport.” It's undeniable that street culture and music have a rich and fascinating history, so to continue the vibrant legacy seems like a logical endeavour. Collaborations of this kind can indeed only help to support all who take part, and the scope for such partnerships are almost infinite. In a time where all those involved in the arts, sports and cultural pursuits are struggling to maintain, the concept of strength in unity has perhaps never felt so appropriate.

So, all that's left for us to say is skate on Isamu! We sincerely hope that this is just the beginning of your journey into the world of electronic music, and we wish you continued success in you life and in your sport. 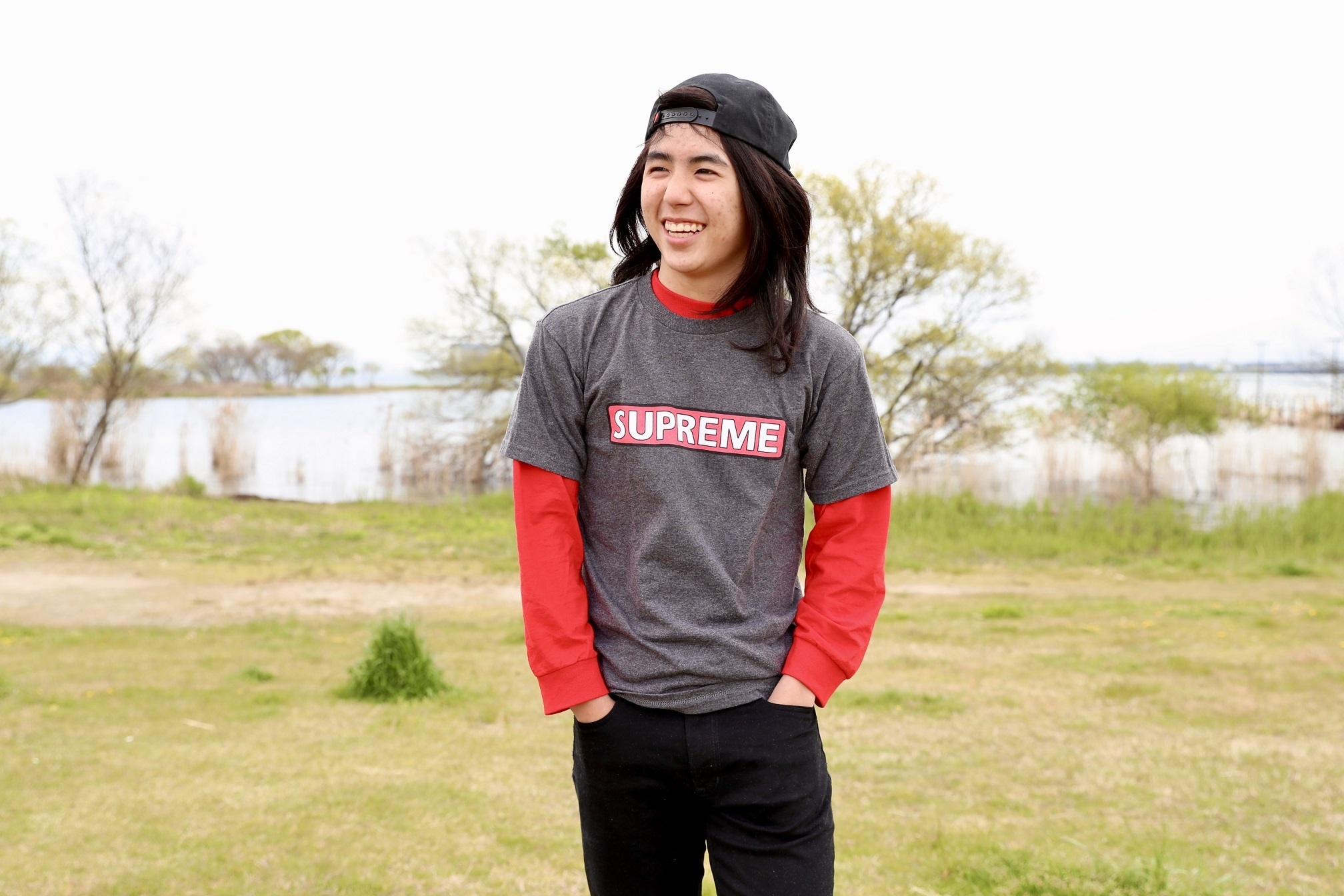 'Parkour!' by Manuel Darquart is out October 16 on Wolf Music Recordings, you can buy it here