The sun is always shining somewhere in Asia, and that means festival season is in full swing year-round. More than just music and bacchanalia, festivals have become extravagant platforms for artistic expression after transformative events like Burning Man unequivocally upped the ante when it comes to festival fashion. Outlandish kimonos and elaborate costumes briefly replace black jeans and sneakers, and even those who typically take an anti-fashion approach often find themselves engaged. Pieces of that culture have floated eastward, and omnifarious fashion has finally etched its way into Asia's festival landscape. And as we creep on the cusp of peak season with festivals like Wonderfruit, Epizode, Colours of Love, and more on the horizon, we shine a spotlight on the show-stopping brands from which women and men can get their kimonos, kaftans and other kitsch, beginning with those based in Asia to those that at least ship here. 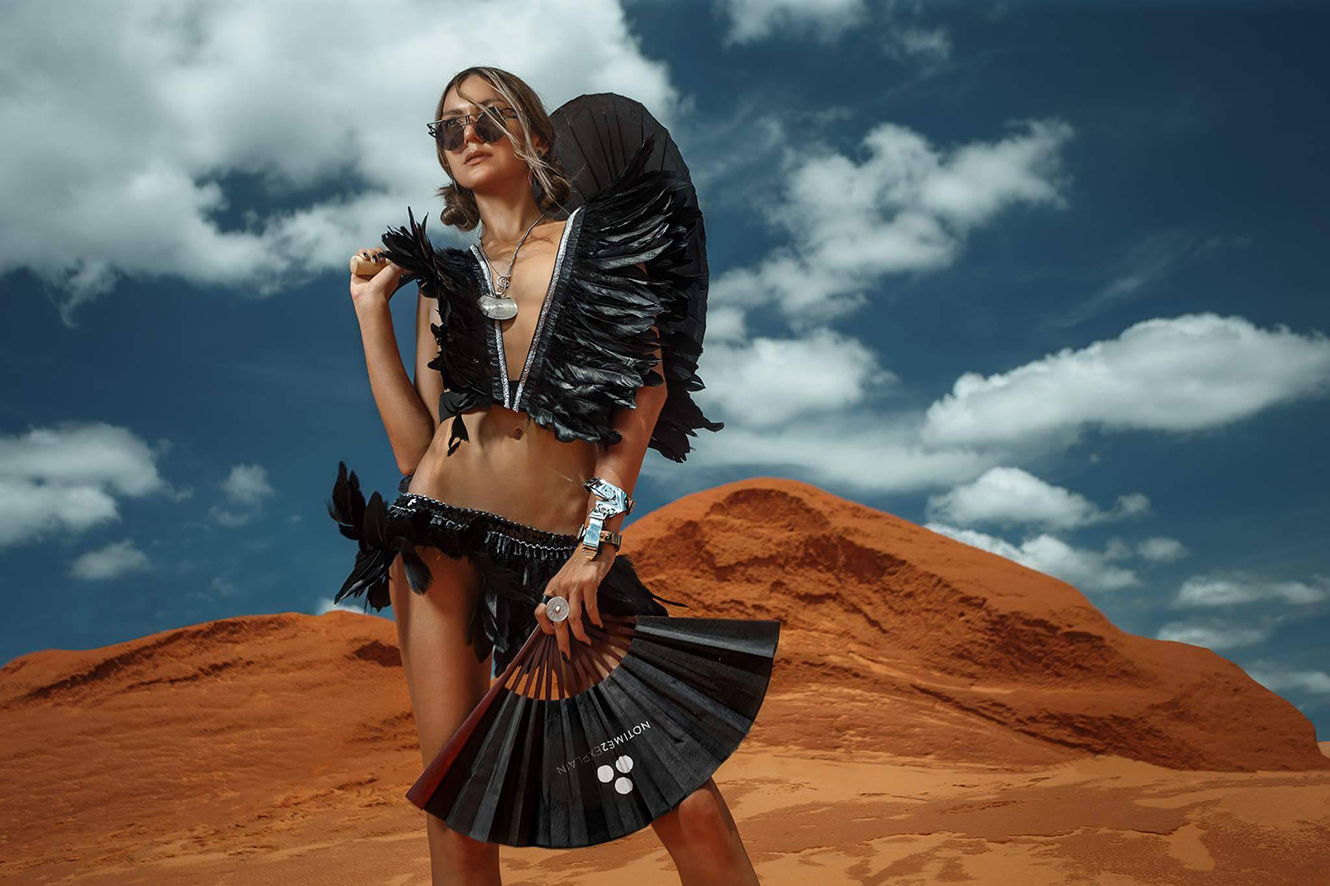 NoTime2Explain are based in Asia and create ethically designed clothing destined for dance floors that are inspired by nature, coloured by light and washed by the sea. From handmade silk fans to featherlight kimonos and bamboo shirts and kaftans, their pieces are crafted from buttery soft silks and organic cotton that is sourced and produced locally. Their overall aesthetic is balanced and uncomplicated pieces of textile that are born out of a mixture of simple but progressive geometric shapes with overall ambitious artistry. Typically cosy, flowing and spiritual in style, NT2E’s designs are perfect for roving The Fields of Wonderfruit or dancing atop speakers at Epizode. While they do have some stock in shops around Bali, Vietnam and Thailand, their collections are often limited, come in small quantity, and made to order, so if you’re looking for something one-of-a-kind contact them directly. Shop here. 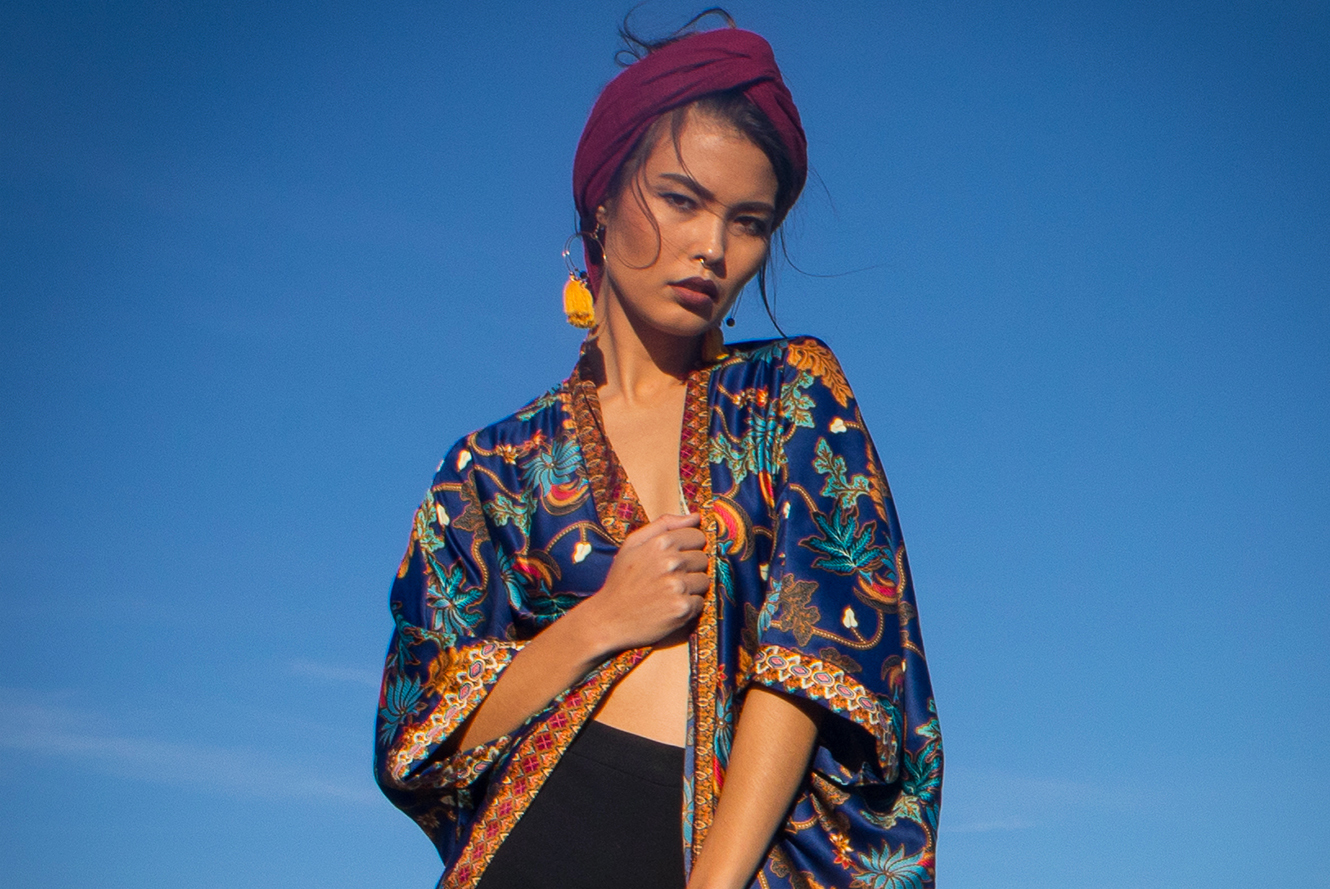 Origin of Hearts is an ultra conscious made-in-Bali brand that creates handcrafted and artisanal resort wear collections with a twist, and resort wear sounds like festival wear to our ears. Rich with ethnic heritage, a story and a cause, Origin of Hearts is a brand that will transport you to their origin not just through a physical possession, but also on a behavioural level. Ultimately, their collections are stunning and very much in line with festival fashion. Unisex kimonos with extravagant prints, bum bags inspired by highly lethal Black Mamba snakes, and shorts inspired by a Mediterranean bohemian paradise are their boast-worthy go-tos and festivalgoers as far as Burning Man will agree. Shop here. 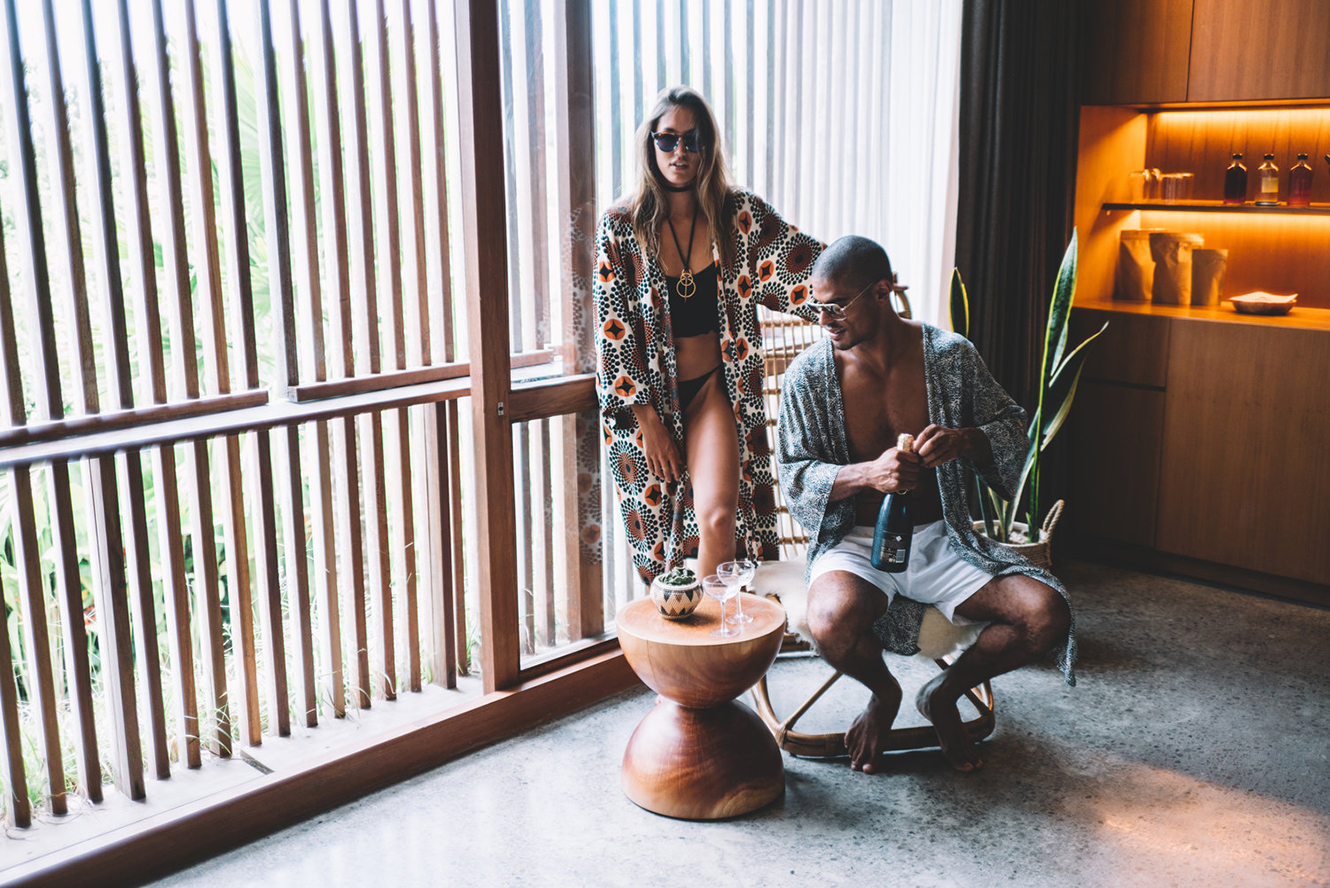 Designed by DJs for DJs, Pagoda is a brand for the tropical hustler. This fast-growing brand from Bali makes super-limited edition pieces are the embodiment of retro-modern leisure attire, essentially easy-breezy caftans and kimonos. Inspired by Bali’s ultra-laidback villa and resort life, their collections have quickly found themselves a favourite on the blissed-out dance floors that the Island of the Gods is famous for — a mood easily replicated at any festival. Shop here. 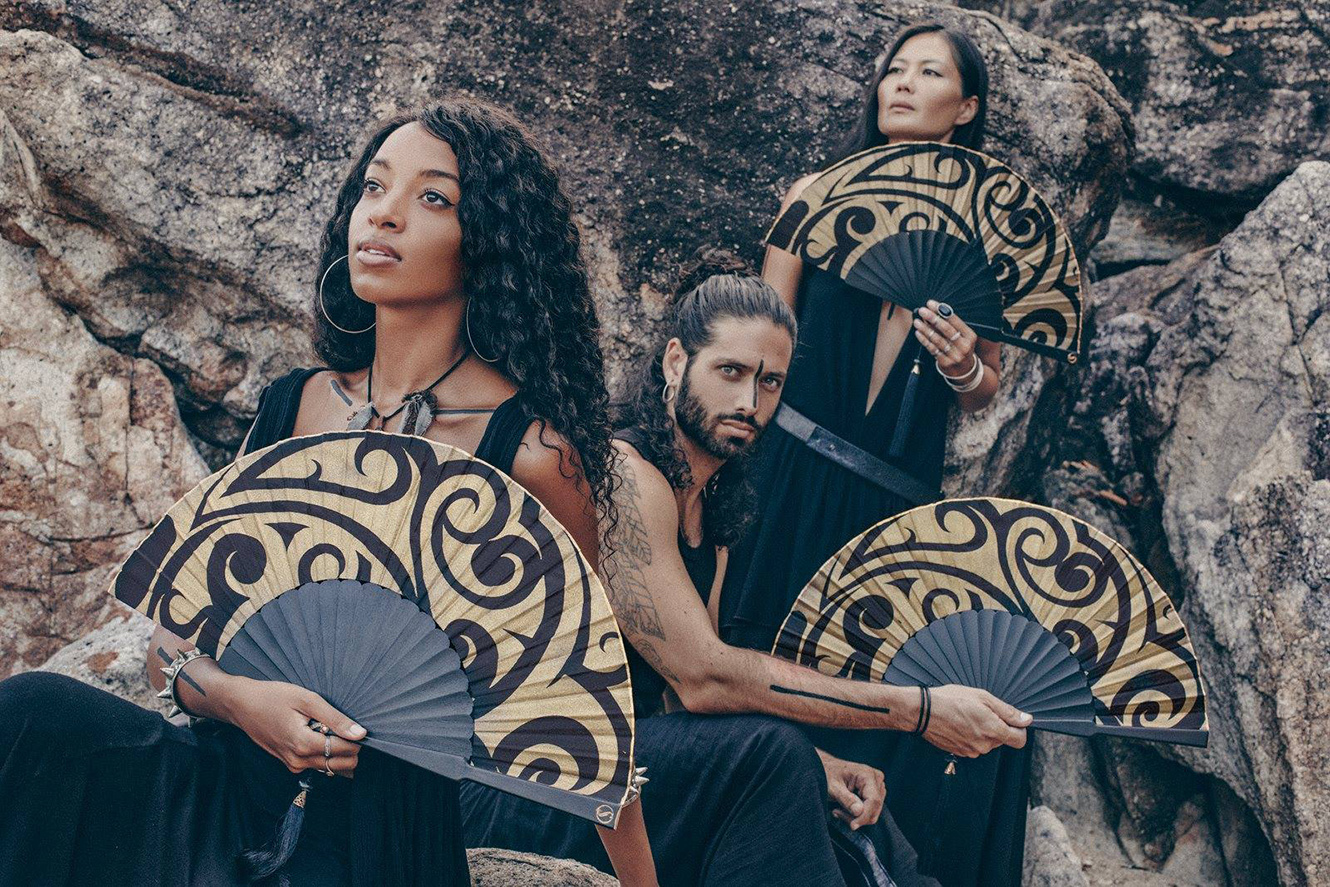 Sukhari makes show-stopping silk fans. Full stop. Born in Taiwan and based in Bali, Sukhari makes one thing, and she makes it exquisitely. The fans are hand made, hand-carved, hand-painted and hand-printed by local artisans, with each fan taking three weeks to produce, which is apparent in the Flower Of Life design. Other designs are inspired by indigenous communities as far as the Amazon jungle. Fans are essential for an Asian festival destination not just to elevate your outfit but to beat that tropical heat. Shop here. 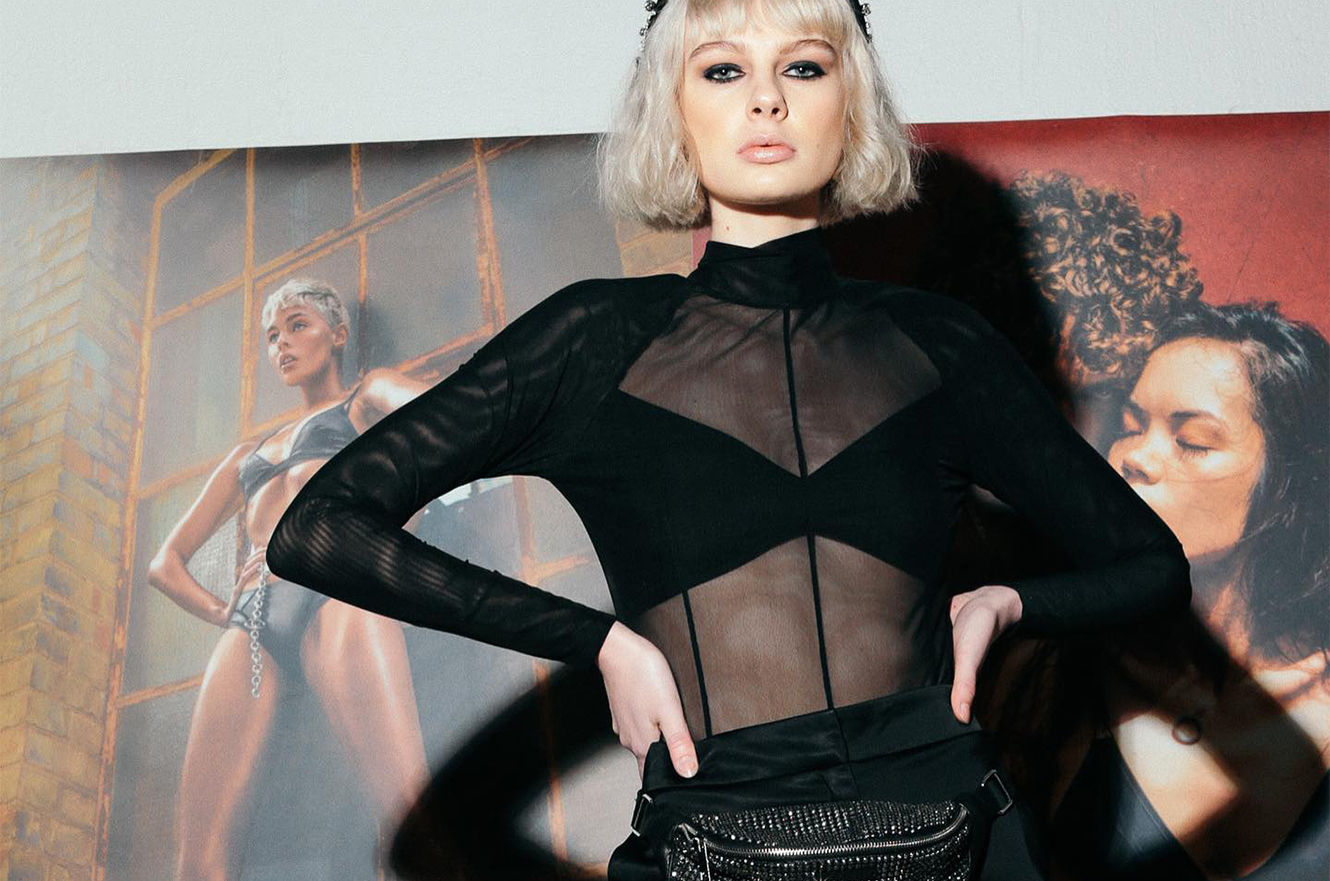 Technically a lingerie brand, Raven+Rose’s statement-making pieces can easily be mixed and matched by edgy females who like to flirt with the outskirts of mainstream. Real, raw and all-black obsessed, their bralettes wink at bondage via echoing multiple straps and can easily be layered under a kimono and paired with hot pants for a complete festival look. And while you’re browsing, peruse their sleepwear section for plenty of robes, crops and sheer tops that loiter on the edge of classic femininity and can compliment a more provocative yet boyishly-cool festival look. Shop here. 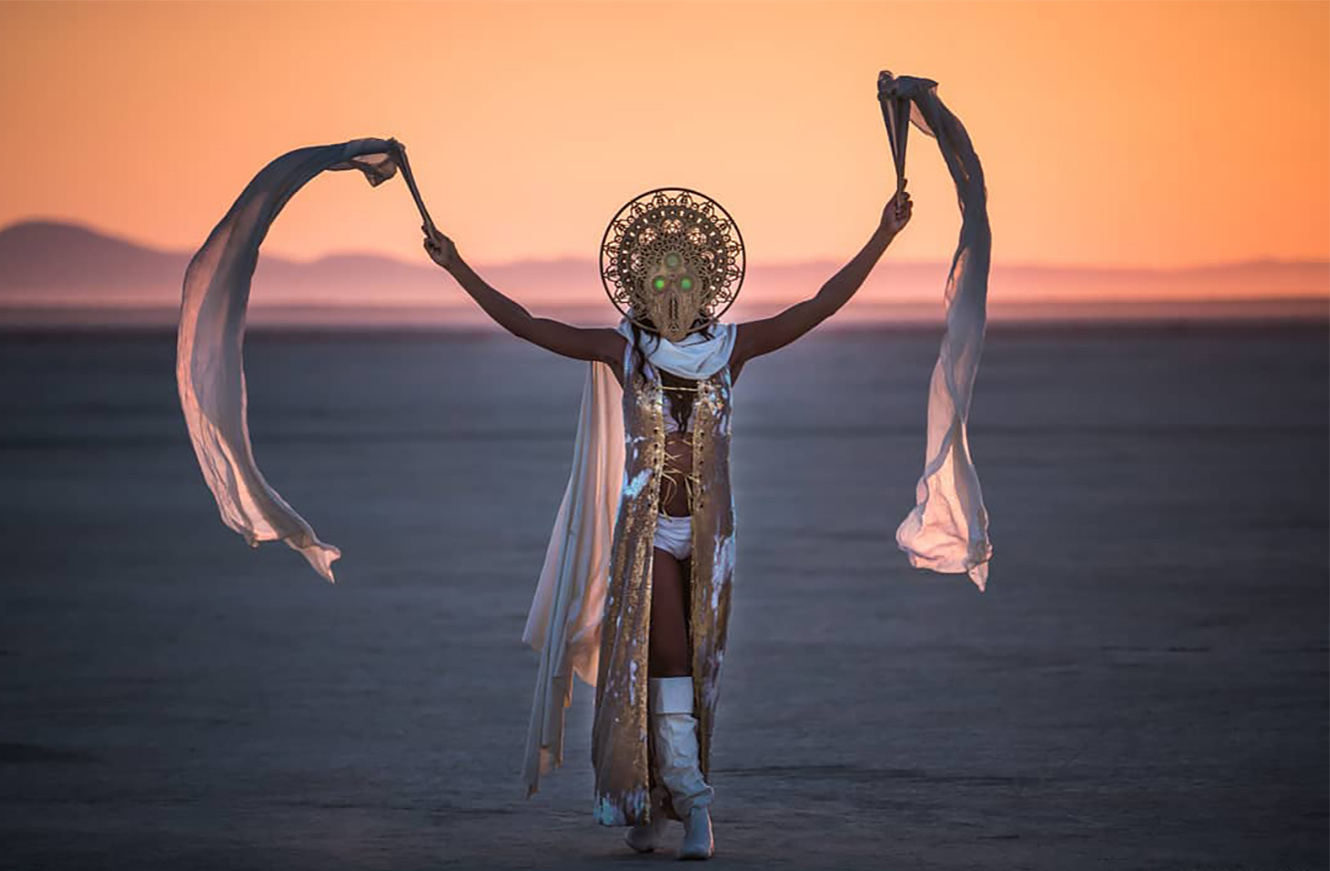 YoshiZen is another conscious fashion brand that brings wearable art to dance floors around the world. The brand and its cosmopolitan ambassadors celebrate freedom and empowerment on dance floors and beyond through visually stunning transformative couture that aims to inspires people around them to be fabulous and free, too. The designer, Yoshi Churnac, draws inspiration directly from the extraordinary world of transformative festivals and has been setting a new tone for festival fashion everywhere from Burning Man to Desert Hearts, Further Future, Lightning In A Bottle and Wonderfruit. Sequin kimonos and flowing drape jackets feature in their ready-to-wear collection, and bespoke “transformative couture” can also be custom ordered through their Etsy shop run by a fleet of in-house designers. And if you’re headed to Wonderfruit and looking for something cutting edge, glamorous and handmade, look for YoshiZen in The Fields. Shop here. 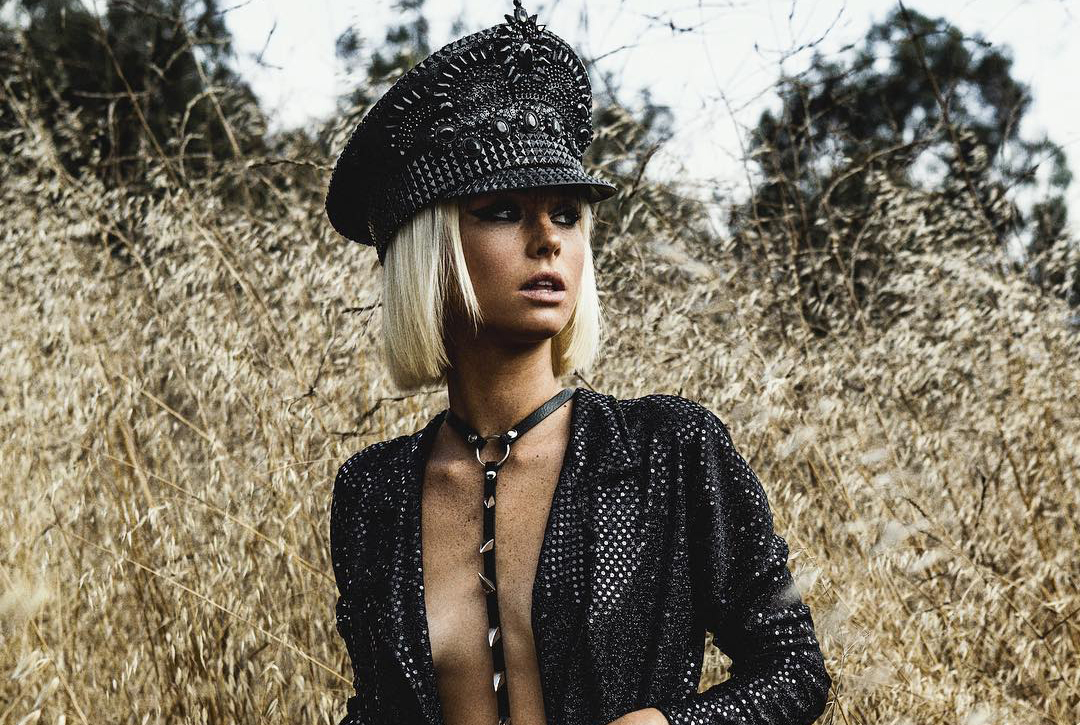 WhoCaresWhyNot is a beloved Burner brand that ultimately specializes in bedazzled hats, headpieces and extraordinarily cool coats that don't conform to any rules (think light-up feather Mohawks and badass glasses and goggles). Their pieces are on the pricier side, but the intricacy and attention to detail that has gone into every head-turning piece make the investment worth the pretty penny -- you'll be finishing off outfits around these pieces for festivals to come. With his pieces, designer Sam Enrique wants you to stand out from the crowd because #whocareswhynot. Shop here. 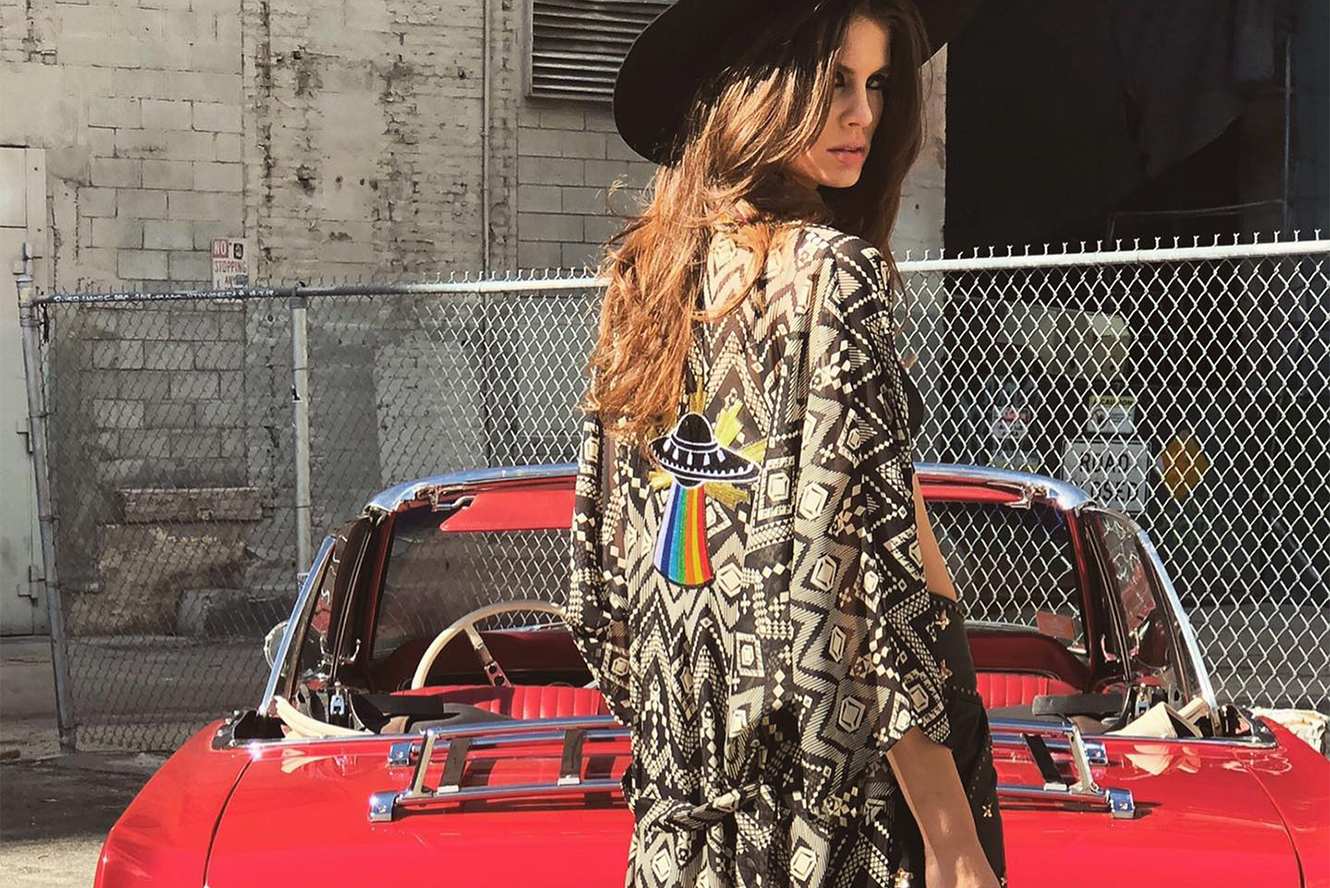 Born out of a love for fashion and music, Moon&Nomad makes kimonos and kimonos only. Designer Beata Sadyska creates one-of-a-kind ceremonial wears with extravagant and rare patterns, adorned with a wild combination of styles, embroideries and tassels — none of which repeat. The kimonos are so popular that they flew off the shelf before she had even launched a website. That’s probably because they have been spotted on DJs like Black Coffee, Carl Cox, The Martinez Brothers, Solomun, Jamie Jones, Dixon, Bedouin, Guy Gerber, Lauren Lane Blond:ish and the list goes on, putting them in a class called club-couture. They’re to die for, but they don’t come cheap either. The cost per use might be high, but the photos will be forever. Shop here. 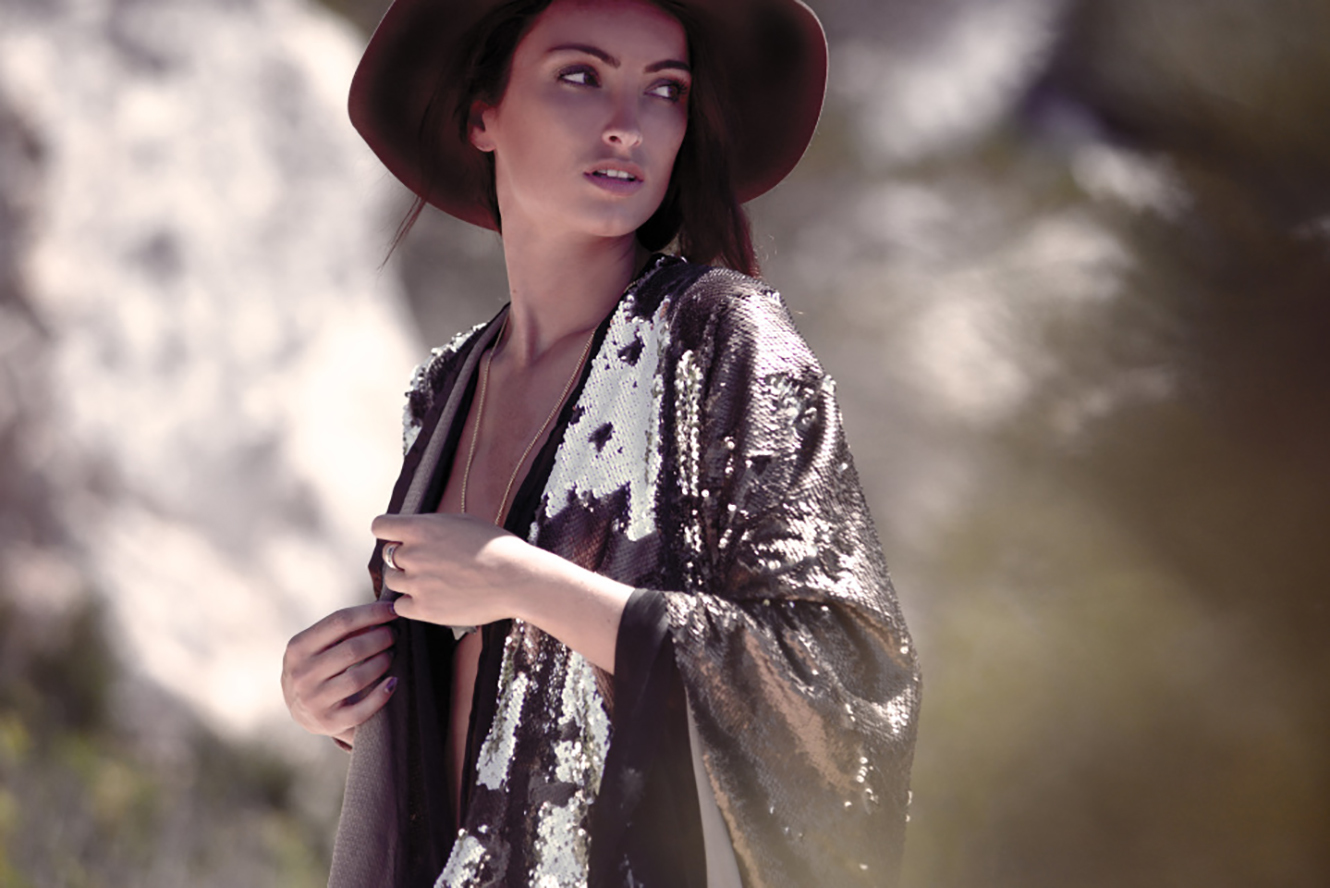 Rita Ghanime’s kimonos were the inspiration for this article -- they are some of the most coveted on Instagram and every time festival season rolls around I dream about how to get my paws on one of these. With intentions woven into every stitch, her kimonos are made with extremely high-quality from-another-planet fabrics — take special note of the reversible sequin and silk velvet styles. Made for men and women, most of her kimonos are custom made (she contacts customers before she starts so she can infuse the kimono with your personal and specific dreams, manifestations, releases and healings) but she does have a stock list if you need a kimono in a pinch. And if you happen to be in LA before Burning Man (where she is known to dress all the DJs, musicians and models), she holds trunk shows in the days leading up the event and are rumored to be where to get the best picks for the best prices (dreams like these don’t come cheap). Shop here. 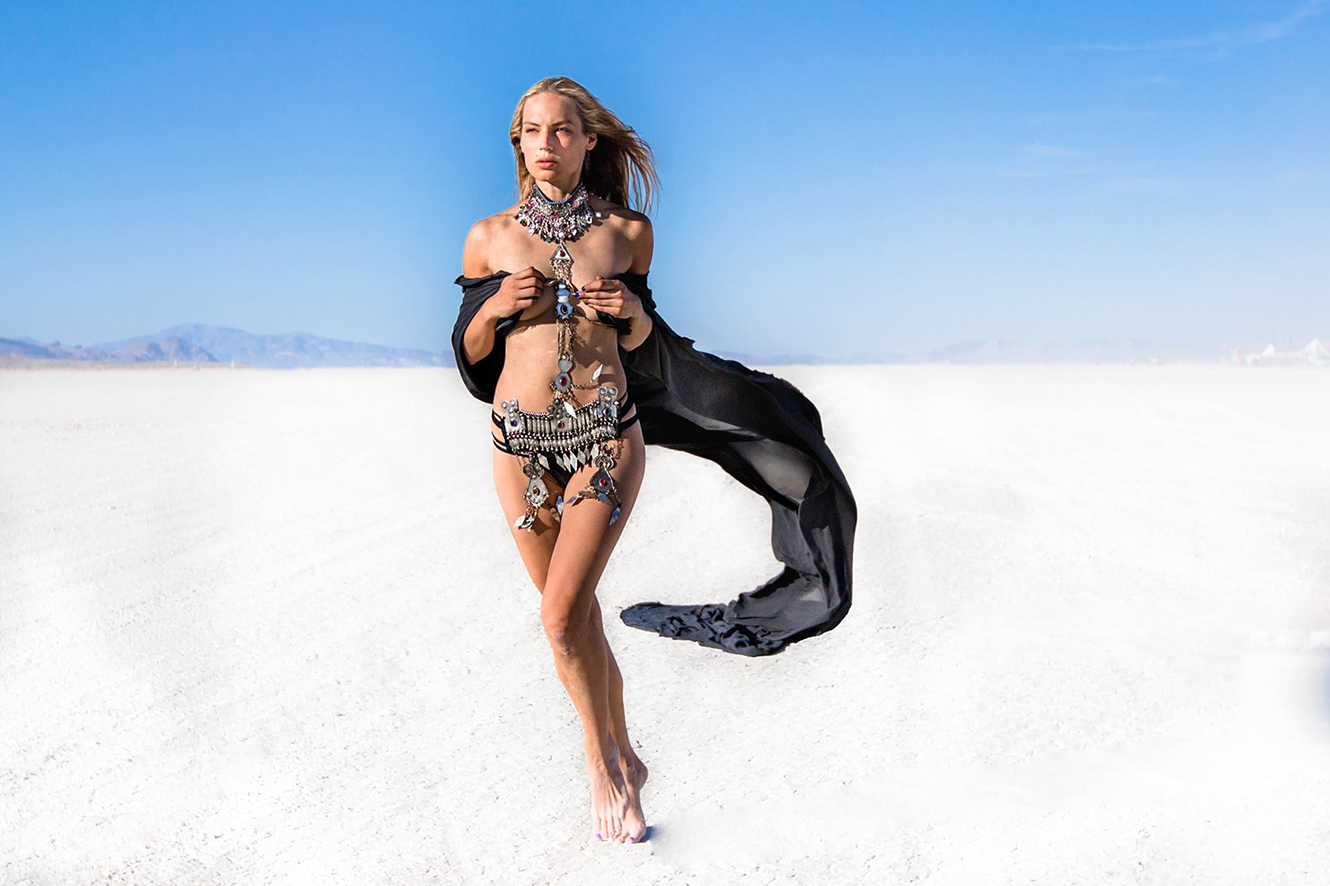 Aumi is the go-to for luxury festival fashion. The designer lives in Australia and spends her year travelling, sourcing and designing badass festivals looks that she sells on her website, which only really springs to life in the lead up to Burning Man. Thus, she’s currently taking a quick break while she dreams up new creations, but you can browse her IG and make a mental note to check back. As a designer and a festival stylish, Aumi makes wearable art in the way of bedazzled hats, bohemian chic flows, tribal pieces, capes and lots and lots of tule. Shop here. 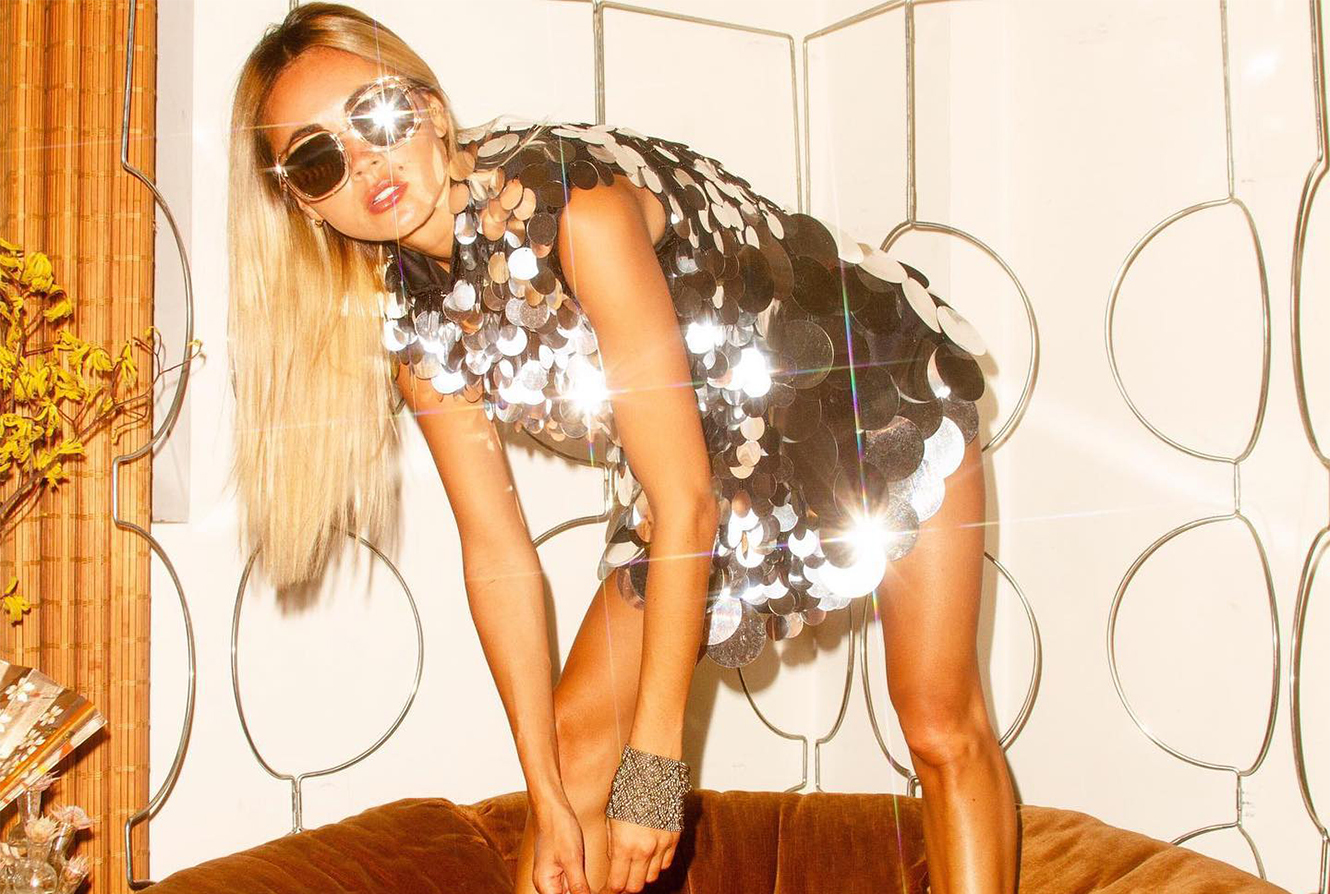 Embodying some serious Studio 54 vibes, Heyami's disco studded statement styles elevate the way you move, think and dress at a festival. Beginning with hologram kimonos, the brand has evolved into luminous one and two-piece sequin sets with accessories to match that aim to push the boundaries of festival style. Shop here. 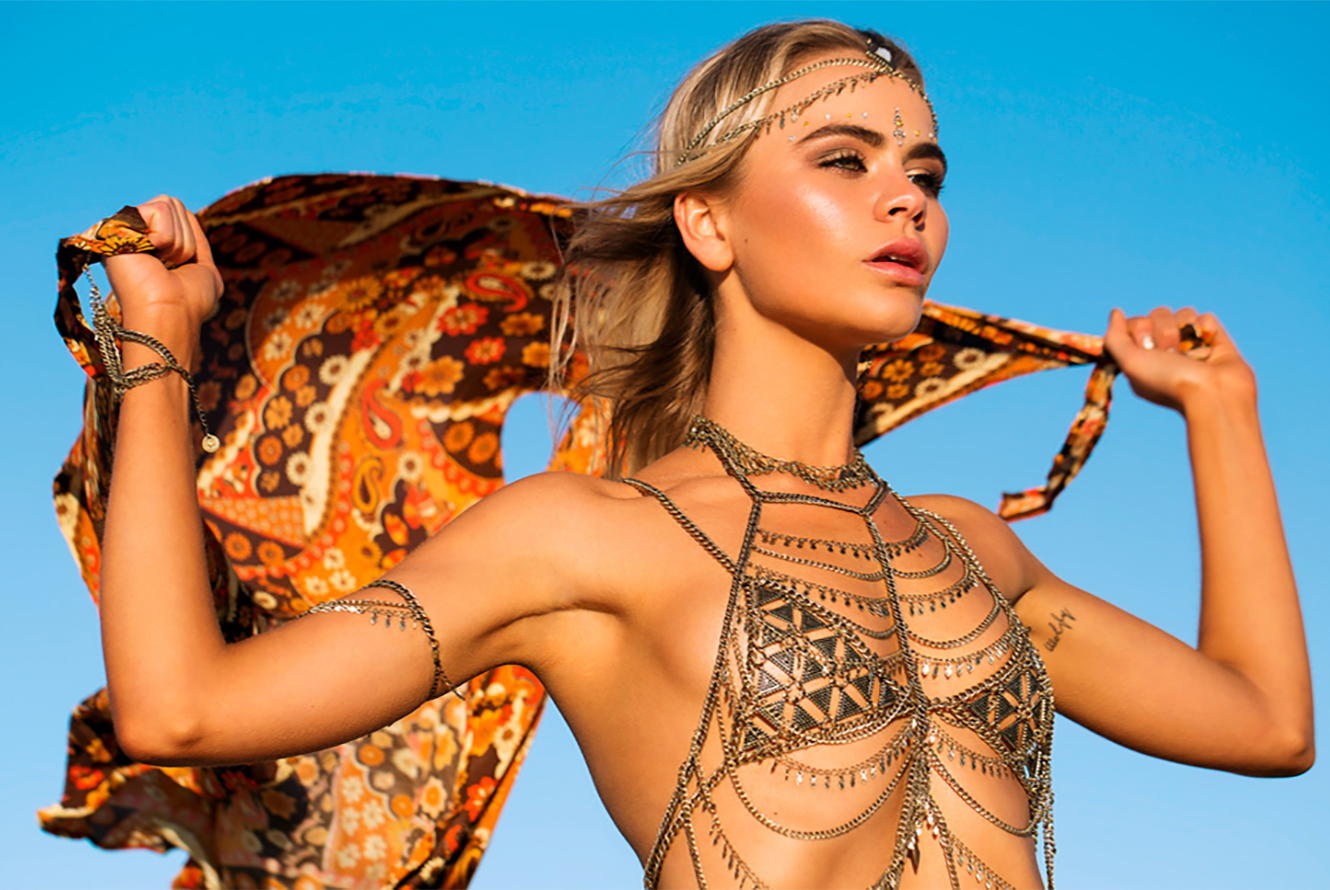 Grace Bijoux makes unique jewelry for modern women. Think chain bras, chokers, bohemian headpieces, anklets, and body chains — all things a little different. The designer, Lisa McDonald, studied silversmithing and the pieces are of the highest quality construction and design that is surprisingly affordable. The Australian-based brand oozes that Gold Coast bohemian luxe vibe and all their pieces are a brilliant way to elevate an otherwise ordinary festival outfit. Shop here. 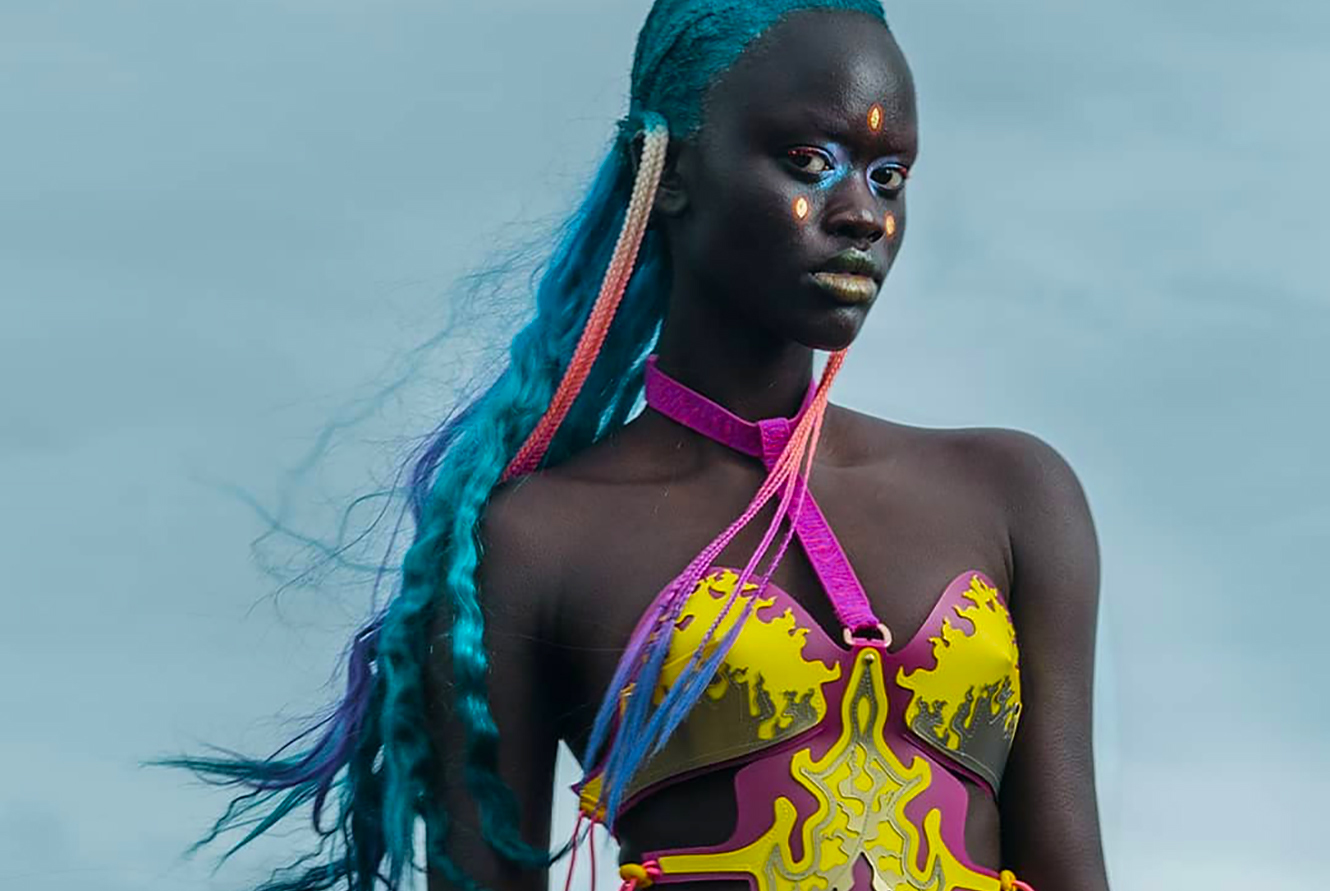 Nixi Killick is fashion from the future made for anyone with avant-garde look at life and style. The brand’s various collections are a vibrant mix of psychedelic art work and sculptured techno-induced wearables. The Melbourne-based label uses fashion to articulate a utopian freshness while drawing parallels between the possible and impossible, while bracing in creative escapism and indulging in the bizarre. The super funky brand can count SIA and Lady Gaga as fans, and if that’s the vibe you get down with, Killick is your new go-to for festival wear. Shop here.