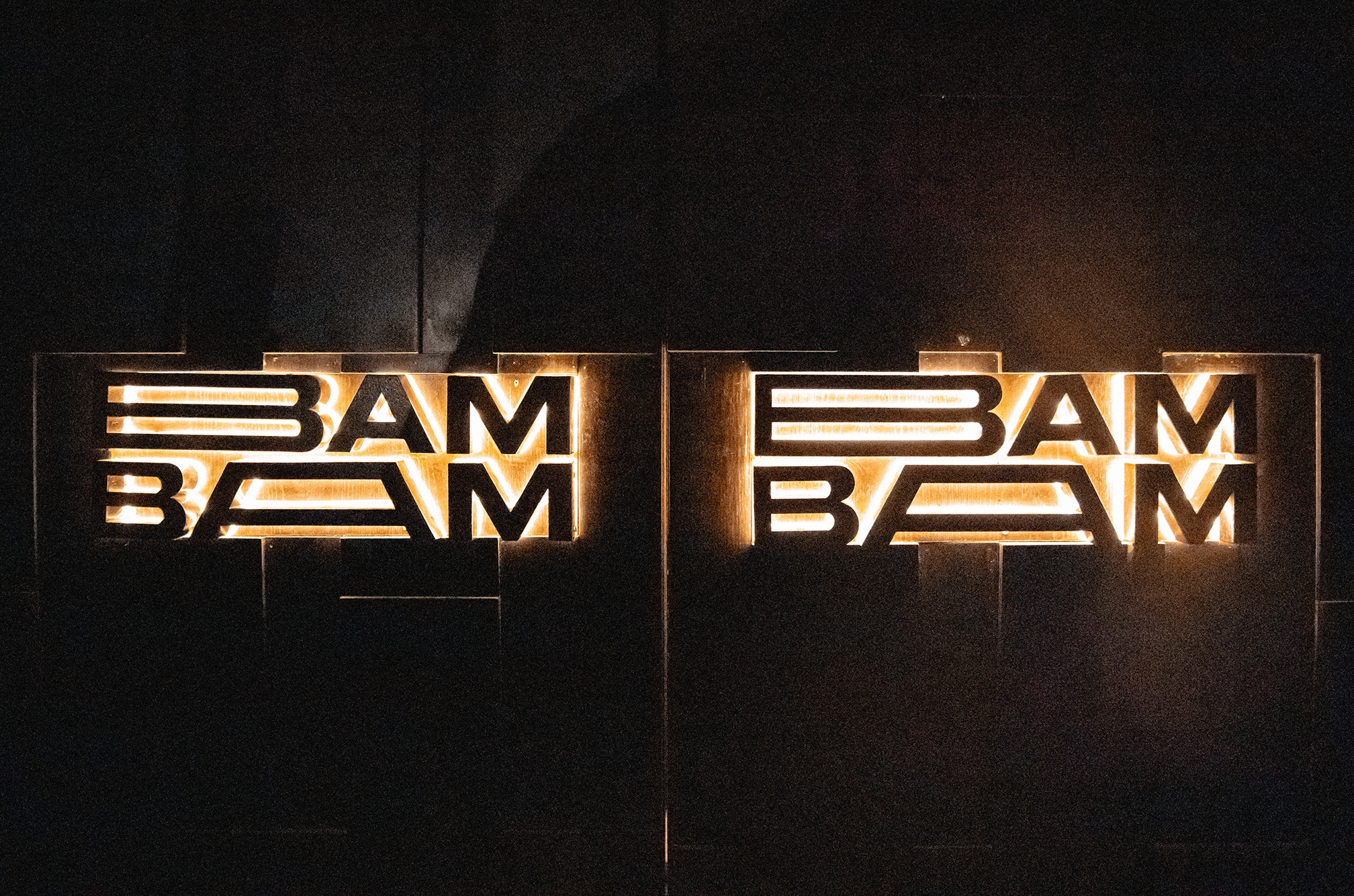 In a country where the electronic music scene is still dominated by vinahouse (a local variation of unnecessarily hard and intense beats served at a rate of 150BPM and over), it is certainly refreshing to see a fresh concept break into the scene with an open-minded music policy, quality drinks and service, and a sleek sound system powered by Void Acoustics.

Nestled in the financial district of Ho Chi Minh City, on Nam Ky Khoi Nghia Street, is Bam Bam, a colourful, vibrant and luxurious cocktail bar that transforms into a nightclub every weekend. The new venue opened is developed and operated by Hype Asia, an entertainment and hospitality-focused company that owns several conceptual dining outlets including one of the city’s most popular tapas bars, Octo Tapas Restobar. 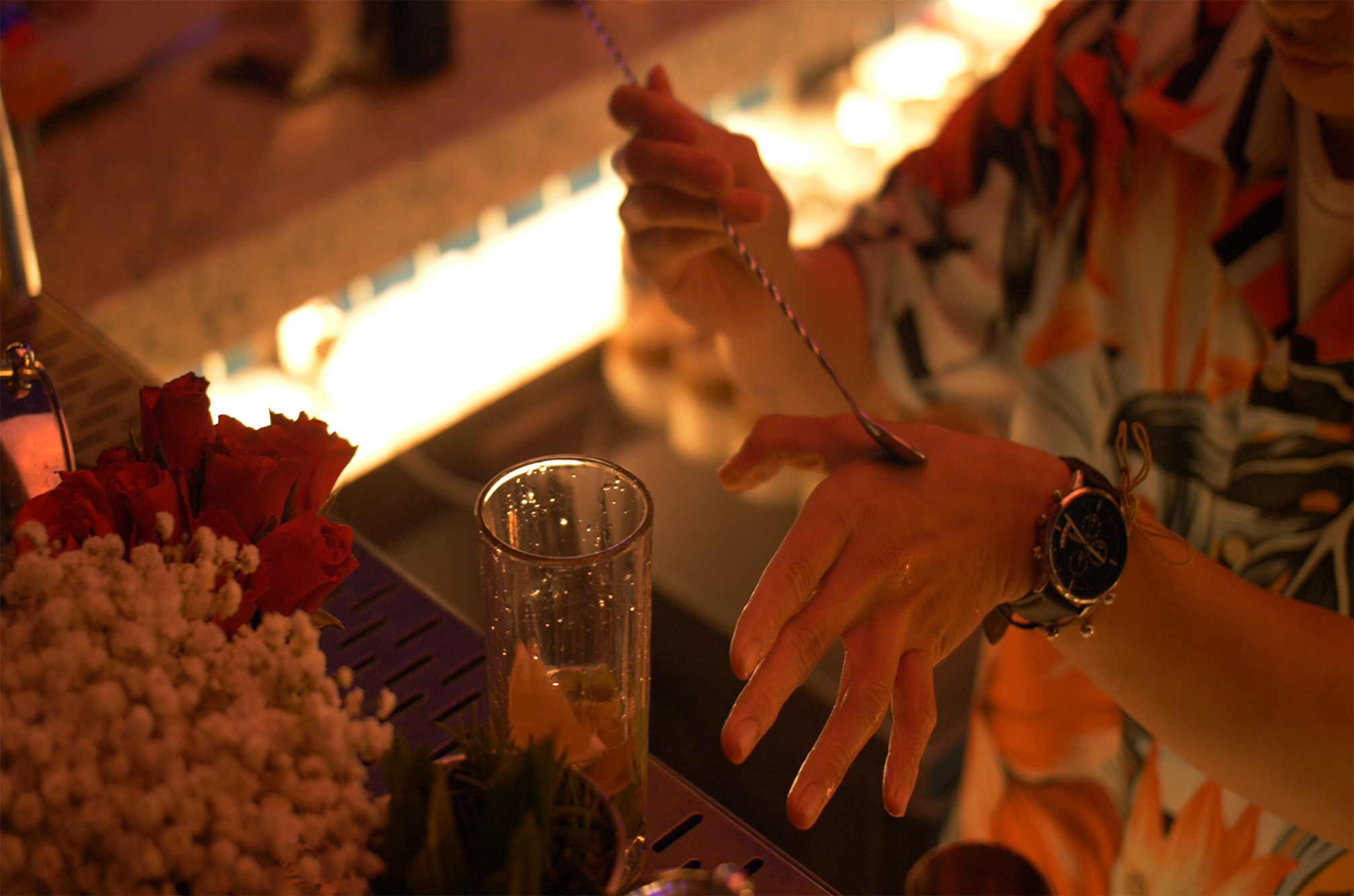 There’s a good reason why Mixmag Asia has so intrigued by the transformation happening in Vietnam, and why we also chose Bam Bam in Ho Chi Minh City as the launchpad for an ongoing series of monthly events that feature top DJs from around the region.

The rapid rate of gentrification in Ho Chi Minh City paves the way for gutsy new bar concepts and business ideas, and Bam Bam has certainly positioned itself as a leader in the city’s buzzing nightlife scene. So now that you’ve got the background check, here’s some insight about what happens once you walk down the hostess-clad carpeted entrance and they swing open the giant opulent doors...

When you first walk into Bam Bam, you will certainly be surprised. It’s high-tech but subliminal, it’s colourful but minimal — it’s just totally different from anything that you’d expect. Talking to Bam Bam’s owner Jonathan Kang, he describes the primary influence behind the concept — Bali, and why he chose to be inspired by the Island of the Gods for his nightlife business venture. “We really like the slightly laid back yet zestful and sophisticated culture of Bali. You want to relax by the beach or watch the sunset, you have it. You want a crazy night of music and good vibes, you have it. Is there any way we can have something like this in Saigon, we thought to ourselves, and said, why not?” 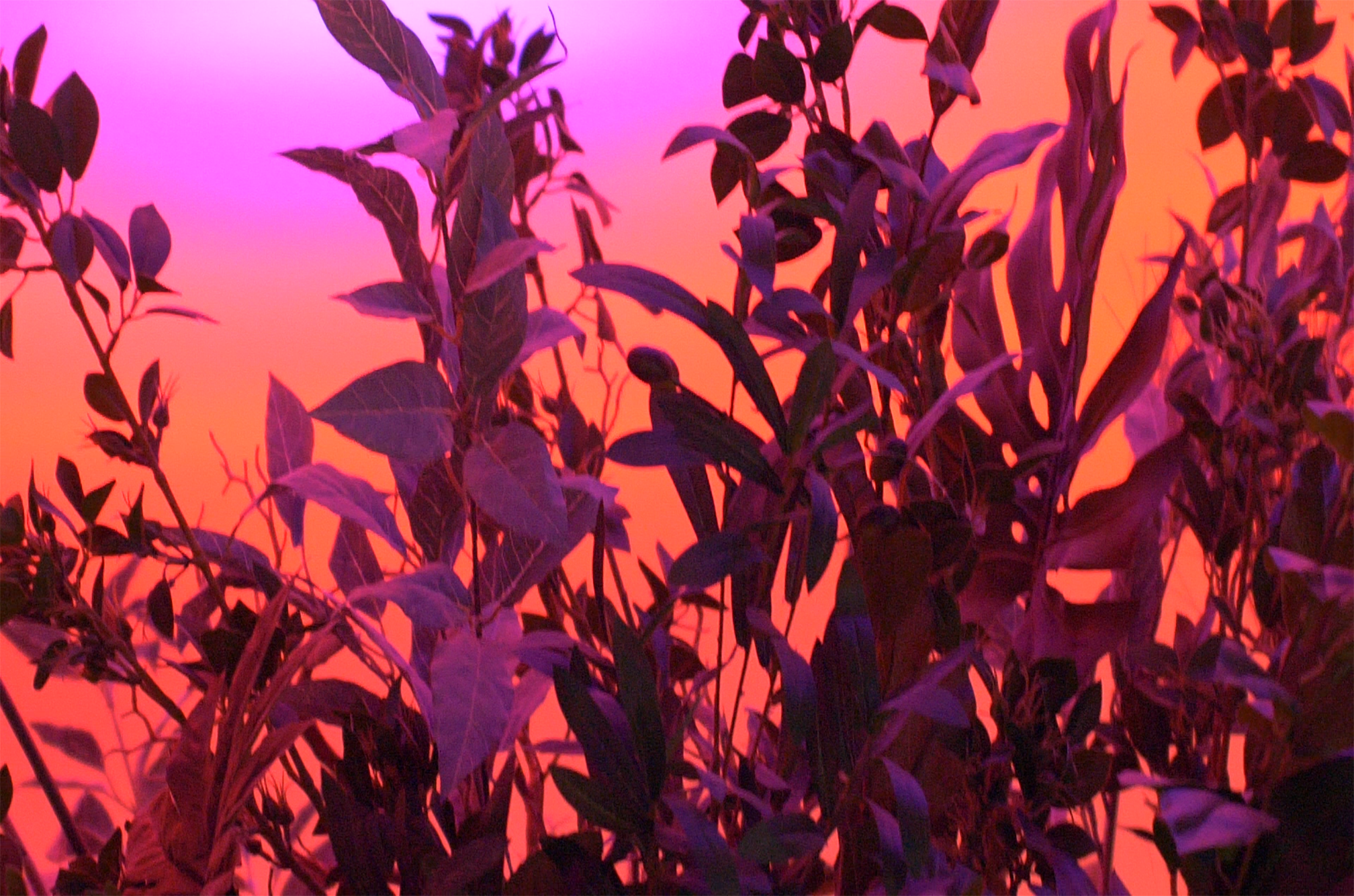 Ho Chi Minh is becoming sophisticated. Just a few years ago, you couldn’t find a comfortable spot that struck the balance between quality cocktails and beverages with quality music. The difficulty to enter the market as a foreigner with foreign concepts has been slightly relaxed over the last couple of years, and as Jonathan elaborates, “that’s why we believe that there is more demand for venues like Bam Bam, where we don’t provide just entertainment but we are also about connecting cultures”. And they certainly have followed through with their ethos, in almost a surreal and superficial way that works perfectly for the scene — the surreal aspect happens the moment you’re grandiosely welcomed in, and you are immediately hit with an allure of a seductive experience, that is both unexpected and comforting at the same time. The priority of steady mood lighting, as opposed to lasers and wild visuals, is exactly their intention, which creates an easy and comfortable environment that still boasts a luxurious sense of confidence and quality.

The rectangular-shaped room is vibrantly held together by contemporary-tropical-island energy, where the tone and manner are subtly chic. As you stroll and gaze through the pink and blue shades, and tiled and concrete room, you are pleasantly embraced by the crisp frequencies of the nicely-spaced out Void Acoustics sound system. There’s certainly an element of that funky-fresh-feeling, but also, a sophisticated one. An intimate island-bar is perfectly situated as the buzzing epicentre of the room, with an energetic troupe of mixologists concocting fresh, ingredient-focused and premium-based cocktails smoothly flow out of flying shakers as elated faces suavely make their way to the dancefloor, which should we mention…? Is a stylishly, yet almost awkwardly-but-still-really-cool, swimming pool, that functions without the water element as a dance-floor. 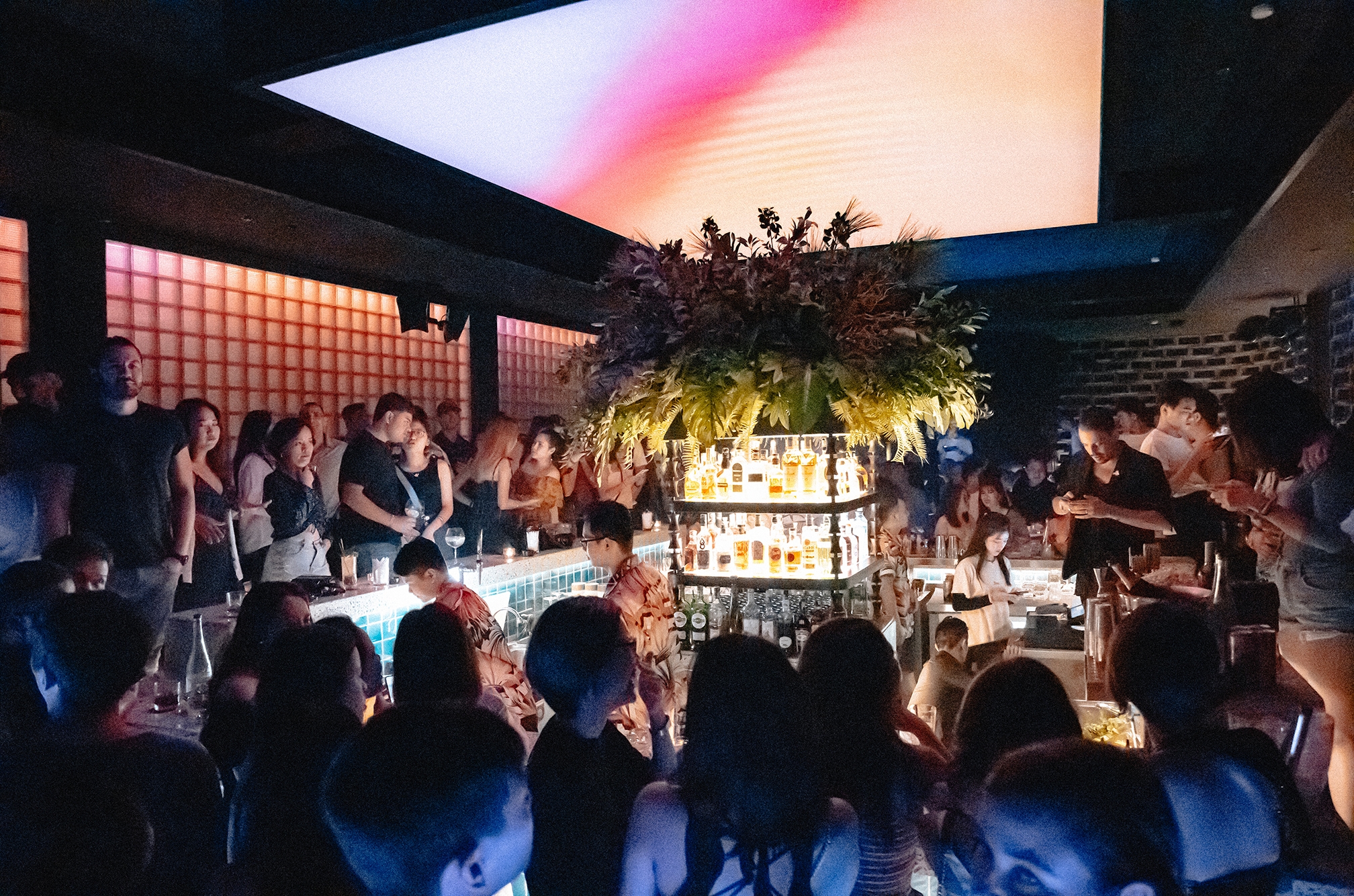 After we surfed past the aquatically-themed dance-floor, we made our way down to the DJ booth, which is ideally located at the far end of the room, giving the DJ an intimate and controlling position to command the energy of the room. There, we got a chance to chat to Bam Bam’s Music Director and resident DJ, Doru Tudose, who also performs under a duo-alias The Tipsy Gipsies. Inquisitive about their impact on the scene and about their intentions, Doru said “the majority of clubs are aligned in playing the same thing. But we’re probably closer to the threshold of changing that more than ever before…judging by the success (of Bam Bam) over the last six months, we must hope that music is one of the elements that attract them. This success has also attracted a lot of attention from other club owners so we expect other locations to follow some of the music principles we have and will snowball into a faster acceptance by the crowd.”

That humble yet ambitious sentiment is backed up by the risks they take on by booking influential and impactful acts such as Chromeo, Mat.Joe, Breakbot and Bondax, and Doru comments further by saying, “But BamBam is not that “genre locked”. We’ve had acts ranging from Preditah to Maseo and from Breakbot to Eli Brown...” Which is a strong statement to follow up from — we have serious hopes the city to grow, especially when the scene is being led by game-changers like Bam Bam.

Just a few weeks ago, we hosted an official launch party with an Asian all-star line-up where Didi Han from Seoul, JonnyVicious from Kuala Lumpur and Bendon P from Singapore all came together to showcase an unforgettable night... at guess where?

In transformational and booming scenes like we are currently witnessing in Saigon, Bam Bam has not just invested into a novel nightclub business, but more-so a positive agenda to impact the scene, that is also being communally driven by dedicated venues and promoters in the city. And Bam Bam has positioned itself at the crux of a very exciting nightlife transformation taking place in South East Asia, that is garnering a lot of outside attention. 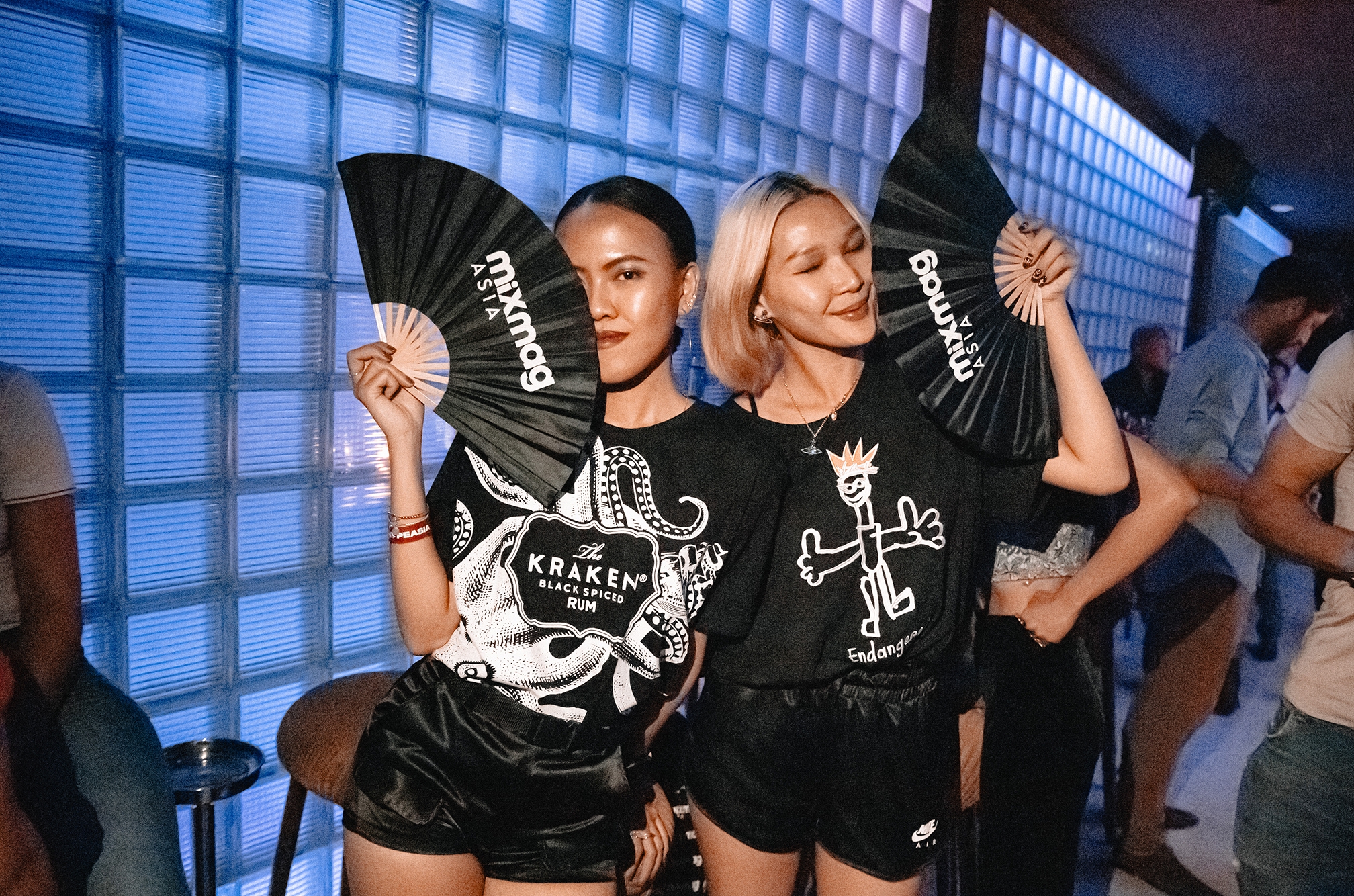 Doru openly commented, “In Vietnam people prefer recognition over novelty, that’s why the majority of clubs are aligned in playing the same thing. But we’re probably closer to the threshold of changing that more than ever before”. In order for any scene to move forward and evolve, for greater or worse (depending on who is reading this), the one thing that has to be in place is an attitude — Bam… Bam!

Mixmag Asia will be hosting monthly parties at Bam Bam, showcasing fresh and funky talent from across the region. Stay tuned for a wild ride at Bam Bam in 2020.

Check out the video from the Mixmag Asia Official Launch party below: