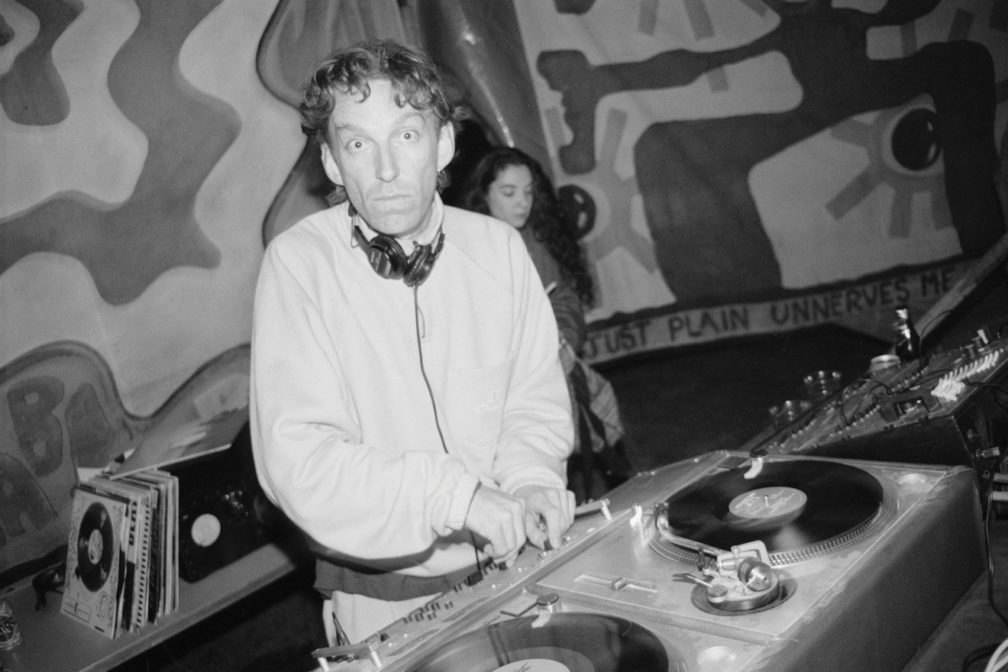 A decade on and New York’s beloved Paradise Garage was beginning to come apart at the seams. In the disco, Levan ruled as ever and the celebrities clamoured to join its faithful, mostly gay, ethnically diverse dancefloor – but drugs and AIDS gnawed at every corner of the club’s success, leading to its eventual closure a year later. The booth remained an audiophile’s temple with an expanded array of tools to play with. Turntables and a tape player still ruled, and a Urei 1620 mixer had replaced the Bozak mixer. A custom-designed crossover allowed Larry to attenuate the different frequencies of the records according to the room’s needs. The DBX Boom Box allowed him to boost the bass, while other specialist tools like the Acoustilog image enhancer allowed him to play with a track’s stereo field or add delay or reverb thanks to the Deltalabs Acoustic Computer. Meanwhile, over in Manchester, the DJ booth of the Haçienda where Mike Pickering (pictured) held court, the club that would later be heralded as the UK’s greatest wasn’t enjoying quite the same attention to detail – although it had seen worse days. In 1983 the booth was squirrelled away to the side of the stage with only a tank-style slit window to see the crowd and an antiquated Aqwil mixer with no faders. Instead, it had an selection of two automatic mix buttons which either jumped instantly from one channel to the other or slowly transitioned automatically between the two. Thankfully, things improved in the mid-80s with the relocation of the booth to the balcony and the addition of the Formula Sound Pm-80 mixer. This revolutionised the resident’s ability to mix up proto-house with other styles thanks to faders and per channel EQs.