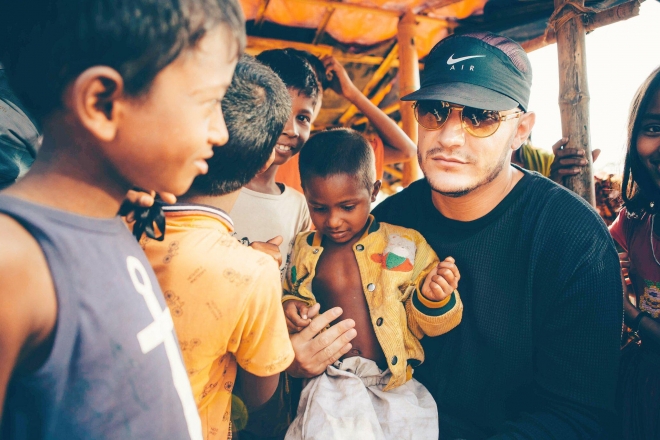 William Sami Etienne Grigahcine, better known as DJ Snake, went live from Bangladesh yesterday in a plight to raise netizen’s attention to the over one million Rohingya refugees from Myanmar (Rakhine State) who have fled the region and now live in squalor in one of the largest refugee camps in the world.

The French DJ and producer is currently there walking among the Rohingya refugees in their camps and posted a video encouraging his fans to help raise resources for the stateless minority that would help improve living conditions by providing food, education, medicine, clothing, shelter and more. DJ Snake has previously posted about the crisis on social media and the movement has spread under the hashtag #loveArmyForRohingya. Watch his video below, in which he asks that his fans share the link and tag anyone with a voice who may be able to make a donation to the cause.

Together with activist network Love Army, founded by Jérôme Jarre who believes the everyone with an online audience has a voice, yesterday they went live and met with refugees, talked to them about their experiences and learned about their needs. Watch the video below.

The Love Army have set up a Go Fund Me where you can directly support their cause here.

IT STARTS WITH US. Please donate now. The Rohingya people need our help. Human to Human. Let’s make a difference. https://t.co/Rts4BXAUlv pic.twitter.com/VJwnyFSxba

The Rohingya are an ethnic group made up of majority Muslim and minority Hindu who have been denied citizenship in Myanmar since 1982, with the United Nations called the Rohingya one of the most persecuted minorities in the world. In the last few years especially, the Rohingya have faced harsh crackdowns by Myanmar authorities and have been forced from their homes, fleeing to neighboring Bangladesh to avoid violence.