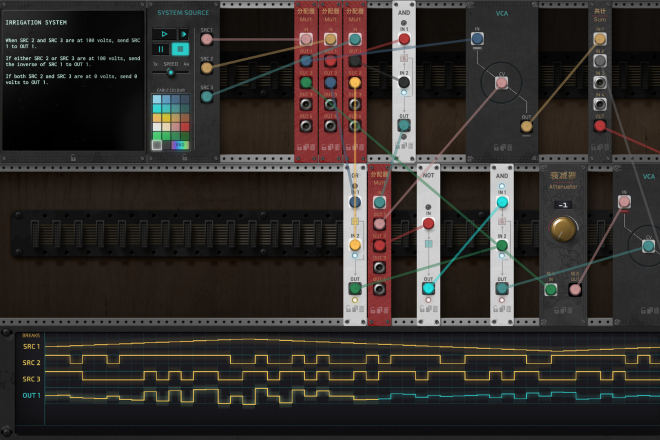 Calling all modular synthesizer experts, a niche new game is here to test your skills in the virtual realm with The Signal State. Putting your logic, puzzle skills and underlying knowledge of synthesizers to work, this game is equipped with realistic Eurotrack synth modules, sound waveforms, panels and more in a dystopian world.

Built on 40+ different playable levels, The Signal State could either be an educational lesson of patching modular synthesizers or test the mastery of your IRL skills. What is reflected in the game is a full-functioning rig system that is packed with a set of modules and panels designed by Italian UI company, Papernoise — the same company that designed the modules for Hexinverter, Mutable Instruments and WMD. Some modular synth experts have documented their gameplay such as Benn Jordan and he notes that he actually learned a new modulation trick from the game. Check out the walkthrough below:

The game is built on a narrative that takes you on a journey as a machine technician and your task is to rebuild abandoned farm equipment in order to produce food that could change the fate of the agriculture process within the game. You will need to connect cables to the modules while making sure you are in line with the set waveforms on the output with the parts that are provided — in turn, allows you to turn on the lights for instance. However, it's possible to get lost in the sauce trying to find the right ‘rhythm’ within the gameplay, but fear not — you will be provided clues by Miriam, who will be your guide within the game.

Reckoner Industries, a Singaporean videogame studio collaborated with publishing company Iterative Collective to develop and build The Signal State, did so in a similar way to Zachtronic games, which is categorized as a ‘programming-inspired puzzle game’ aka as “Zachlike”. Founded last year in 2020, their goal in curating games stem from using unconventional systems and real-life moments to provide innovative ideas that are left unexplored by other players in the gaming world.

“We are excited to work with Reckoner Industries to bring The Signal State to fans of puzzle games all over the world. It offers a fresh perspective on both the puzzle and simulation video game genres to create an experience that will appeal to fans of each and challenge even the savviest of puzzle solvers,” explains Matthew Quek, CEO of The Iterative Collective.

The Signal State is listed as one to look out for in the SEA Game Awards, taking its place as one of the most striking games in the region due to its target to the niche positioning in the world of games. In addition to this, one can’t dismiss the LoFi tracks that accentuate the soundtrack of the game — keeping the player calm and collected while your brain wraps itself around wires of spaghetti laden colours.