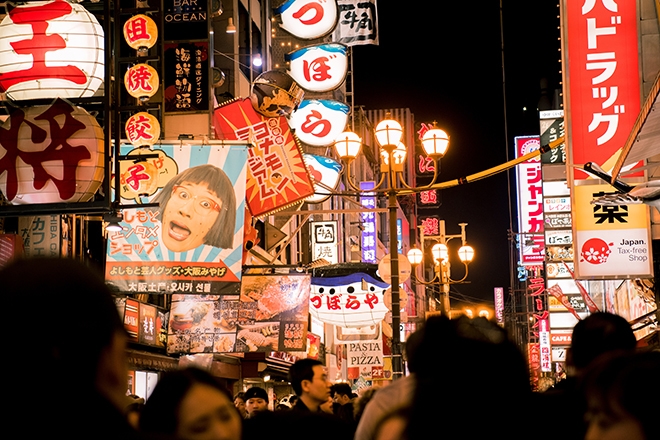 The number one reason to travel to Asia? The food. Even in interviews, DJs boast about all the incredible and adventurous food they indulge in while on tour in the region. Not for the uninitiated, we put together a list of the most cringe-worthy but must-try culinary creations for the more intrepid festivalgoers who kill hangovers with a huge helping of local flavours. How many have you tried? 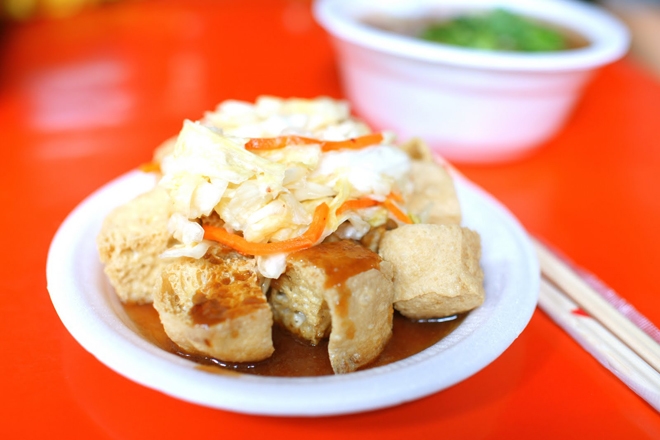 There are two kinds of people. There are those that are wildly obsessed with stinky tofu and salivate buckets anytime the smell permeates the air, and there are those who will gag if they are within 100 feet of the Taiwanese dish. Apparently, the overly pungent smell and taste will grow on you after a while, kind of like blue cheese, but a whiff of it while inebriated is enough to make your stomach turn. Stinky tofu, known locally as chou dofu, is deep-fried fermented bean curd with crispy skin that is usually topped with vinegar, pickled cabbage, chilli and garlic. It can be easily found in the night market and most food stalls, many of which are a stone's throw from Taiwan's bustling nightlife meccas. Don't worry about not being able to read the signs; we promise that you will smell it. 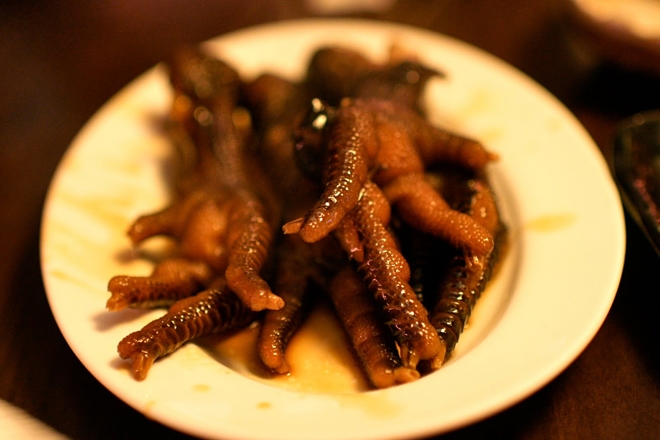 It was a toss-up between chicken feet and thousand-year-old eggs, but chicken feet won because of how horrifying it is to watch someone devour them. I was once unfortunately seated next to one hungry fan after a night out in Hong Kong and witnessed a full-on devouring of the gelatinous feet that was offensive enough that it should have been criminal. Not a tissue was left from between the very small bones. Imagine eating a chicken wing, but with talons. Wrinkled and claw-like, they are made up of bones, tendons and cartilage, deep-fried and served with a fermented bean sauce. They are often used to make soup stock as well. Locals believe that they are loaded with collagen, thus keeping them young. Careful sinking your teeth into one of those, you can actually hurt yourself. 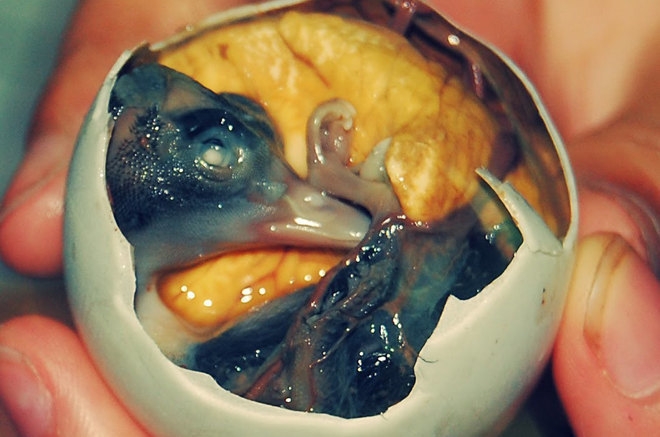 The WWF can’t be happy about popular Filipino delicacy called balut. It’s a boiled duck or chicken egg with a partially developed embryo still inside, and it might be most offensive and morally wrong culinary edible in the world. Not for the faint of heart, the 18-day-old fertilized egg is eaten warm from the shell, and the amniotic liquid is sipped before eating the yolk and semi-developed fetus much like you would a hard-boiled egg. A culinary fascination indeed, but balut will revolt even the most adventurous foodie. Balut vendors usually come out at night, probably because it’s darker and therefore easier to stomach, and are popular with people coming off of alcoholic binges. But don’t do it. There is no arguing it. You’re eating a baby bird. Just don’t. 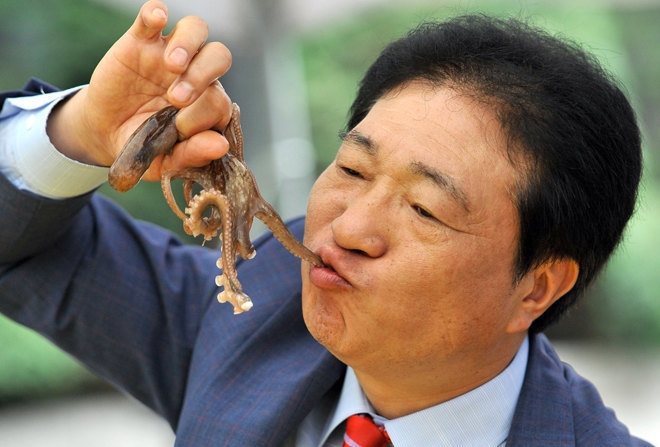 We've fortunately (or unfortunately) never witnessed someone actually chomping down on a live octopus, locally referred to as Sannakji, but the internet is awash with videos of brave souls trying to get the writhing invertebrate down. The smaller of the sea creatures are taken fresh from the water and eaten whole, but the larger ones are quickly chopped and served squirming on your plate. Be careful, because the suckers keep on sucking even after they're cut up and chewed so you just have to get the thing down as fast as you can. Apparently, choking is common, especially amongst those who are intoxicated — there have been deaths reported from ingesting live octopi. 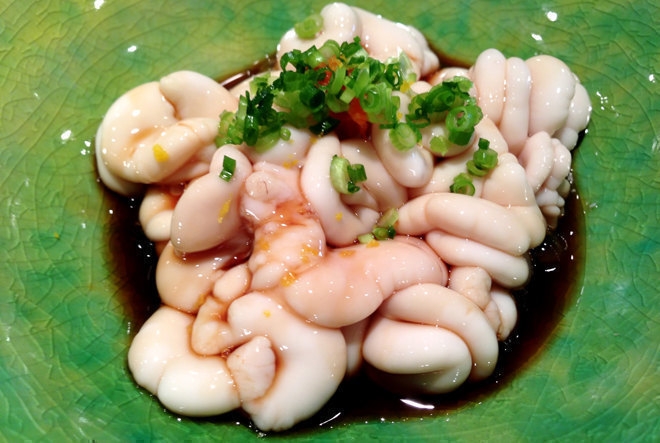 While some might argue that all Japanese food is little outlandish, we're inclined to believe that the weirder, the better. That definitely applies to shirako — or known to foreigners as fish sperm or milt. But in fact, the word directly translates to white children, and the sperm sack is usually harvested from fish like cod. The popular bar snack is served both hot and cold, resembles a white mass of scrambled brains and tastes both milky and buttery. The texture is a bit like jello but creamier, almost like a custard and not that far off from an oyster. It's surprisingly tasty and hardly cringe-worthy. I mean, if you think about it, people consume sperm all over the world every day, right? 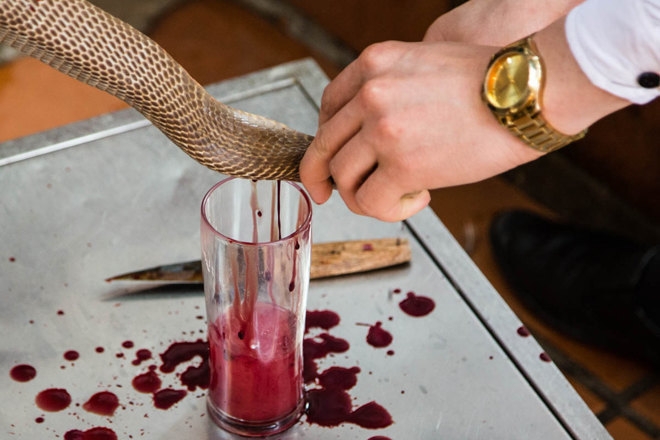 The Chinese have a saying: "If it walks on the land, swims in the sea or flies in the air, we'll eat it". And they take that saying to heart. And that means eating the heart and every other part of every living thing that exists on this planet. Lauded as the most culinary adventurous country in the world, there is no arguing that China is a food lover's paradise, but there are more than a few dished that will send you running for the bathroom no matter how many drinks you've had. Snake is no exception. Not only can you chose the snake you want to eat while it's still alive and slit the throat yourself, but you can also drink its blood and bile and eat its beating heart (an especially common practice in Vietnam if you're in the neighbourhood). Since the blood and bile are usually served in a shot glass with rice wine, this would be a good option for pre-drinks, especially since it's considered the Holy Grail of aphrodisiacs. A few shots of this and you're sorted as far as stimulants go. Once you've gotten past that part, there are a myriad of ways to eat the snake, like shredded in soup or in a casserole. Also, if you're watching your weight, you can still enjoy low fat and cholesterol delicacy. Oh, and we recommend the more venomous ones for the added health benefits. 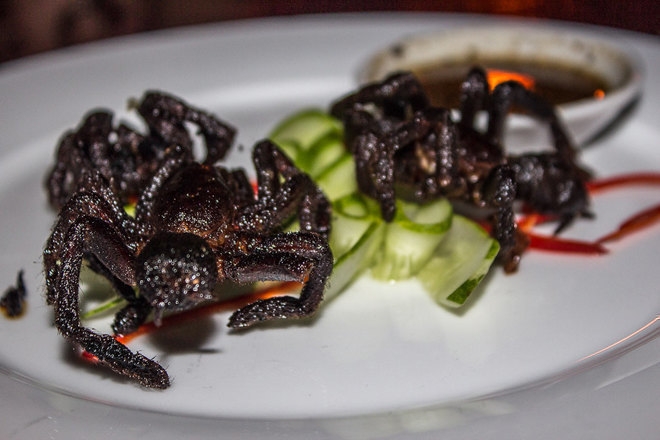 My first time in Cambodia, my friend and I bought a fried tarantula roadside just for the novelty of getting a picture while taking a bite. We ended up carrying it with us through the scorching heat for half a day, and upon arriving at our hotel, we asked the staff to throw it out. The doorman man looked at us as if we were mad and popped the arachnid into his mouth whole. Eating insects is widespread all over Asia, things like grasshoppers and beetles, but a tarantula — that’s next level. But then again, anything fried in MSG and garlic is good. Bred in holes around the country, the crunchy creepy crawlies are widely available throughout Cambodia, and it won’t be hard to find them upon leaving the bar. 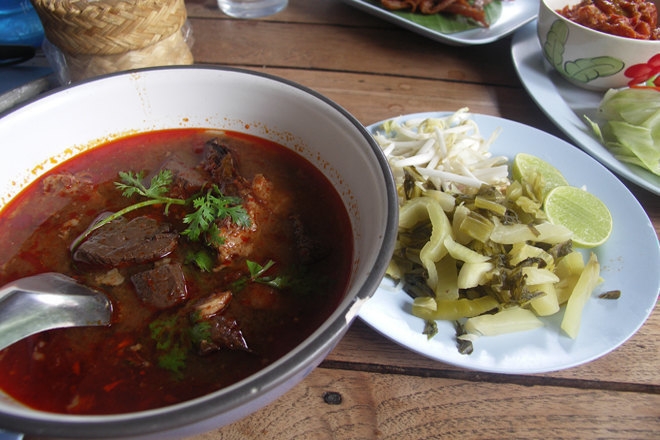 You've really got to have an iron stomach for this one. Eaten as soup and often with contents like brain, intestine and heart, pig blood is eaten raw, so proceed with caution – bacterial infections are not uncommon. It's referred to locally as Nam Tok and the gory soup is served spicy with toppings like kaffir leaves and pork skin. If you're brave enough to get through a bowl of this without hurling, bless you and bless your insides.

See Anthony Bourdain chow down below.