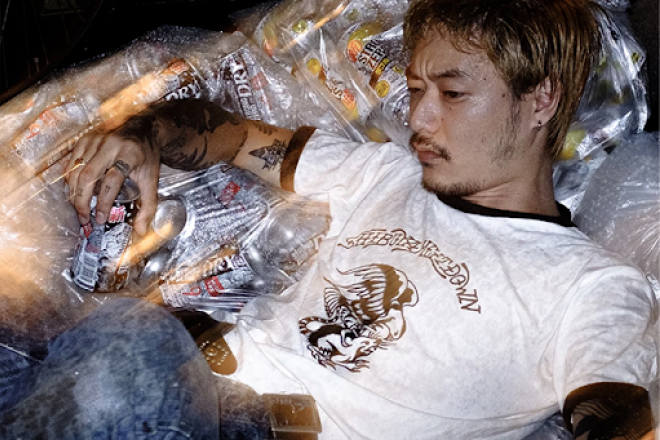 Japan has for a long time been known internationally as a country filled with hard-working folk under intense pressure. However, work as hard as they do, some Japanese seem to play just as hard; this other side of Tokyo life has been documented for nearly seven years by the Instagram account Shibuya Meltdown, which features countless photos of people who have had just a little (or a lot) too much, passed out on trains, footpaths and elsewhere in compromising positions of varying extremes. There is some pretty legendary meltdown material there. The page has gained a pretty big following over the years within and without Japan, and has wound up scoring its anonymous creator a collaboration with TATTOO STUDIO YAMADA, releasing limited-edition T-shirts and posters.

The collaboration was announced on both the Instagram pages of Shibuya Meltdown and TATTOO STUDIO YAMADA, with the merchandise itself available for purchase on the TATTOO STUDIO YAMADA webstore. The design on the front of the T-shirt is that of a rat and pigeon, which is meant to represent the infamous Shibuya alleyways, underneath a “Shibuya Meltdown” heading. On the back, there is some text that simply states “what goes up, must meltdown”.

For the merch release, TATTOO STUDIO YAMADA’ lead tattoo artist Len Yamada modeled the merch as a disoriented victim of the night splayed out atop plastic bags filled with empty cans. The lookbook for the tees and posters is on their website, and they also released a video of the little public stunt shoot here.

The collection also comes with an A3 Flash Poster with five graphics designed with the theme of the meltdown. Find the merch here.

Feast your eyes on the meltdowns of Shibuya here