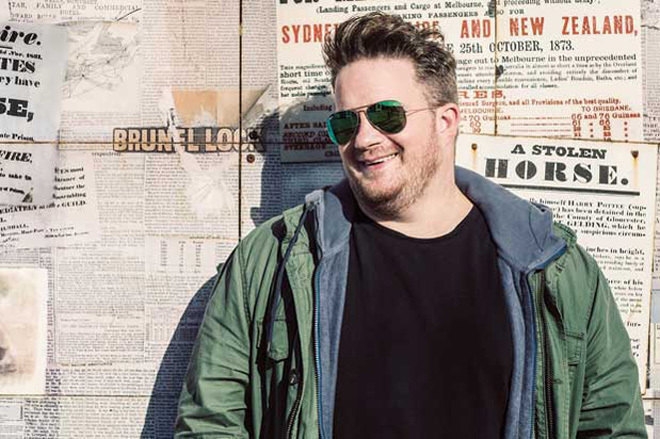 The Eats Everything story is the kind of rags-to-riches tale capable of melting the most hardened of cynics’ hearts. A little over three years ago, Dan Pearce was flitting between jobs as a labourer and stints on the dole, while long-held dreams of DJ stardom (Pearce had already spent well over 10-years as a jobbing DJ on the Bristol scene) started to look increasingly distant. That was until he knuckled down to an all-or-nothing, last-ditch attempt at making it – and produced one of 2011’s biggest dancefloor records in ‘Entrance Song’.

Since then the 35-year-old from Bristol has released on Dirtybird, remixed the likes of Jamie Jones, played everywhere from Glastonbury to Amnesia and become not only everyone’s favourite dance music everyman but a real DJ’s DJ. Hell, the guy’s basically a one-man version of The Mighty Ducks! We caught up with Dan to find out what was so special about 2014, how come he’s glad success came to him later in life and why he can’t decide what to play at midnight on New Year’s Eve…

It’s been a wonderful year. I’ve become a father, which is the most important thing, and I’ve played some real dream gigs. I had a great Ibiza season and managed to break into territories like Italy and Spain a lot more. I’ve been DJing for 22 years, but I’m still learning every time. One of the key things this year has been learning to play different places. I remember playing in Italy about two years ago, and getting it so wrong. I played bass music and Dirtybird music because that was what I was known for, but I didn’t realise how different playing there was to the UK or America. Now I go to Spain and Italy and smash the back doors out of it! 2014 has been the year I learnt the most about myself as a DJ and came on the most.

The XOYO Residency series was a big moment for you this year. What does it take to make a great resident DJ?

I think being a good warm-up DJ is as good a skill, and as difficult to learn, as playing peak-time and smashing the crap out of it. Although I was the headline name for the XOYO series, I’d always put myself at the bottom of the bill. The DJs I had playing with me were the DJs I really wanted to see play, so I wasn’t going to book them and then make them play warm-up. Playing first, last or the headline slot are three very different ways of DJing and you have to know how to complement the other DJs. So many warm-up DJs now try to show up who’s playing after them, but you have to respect who’s on after you.

In a dream world, who would you want as your warm-up DJ?

Someone I played after recently – though I’d never want to disrespect him and call him my warm-up DJ –was Derrick Carter. He was incredible. Derrick Carter, me and Carl Cox. That would be my dream line-up.

Yes, eight hours on New Year’s Day. God knows why I’ve agreed to that! I’m playing midnight at The Warehouse Project, then in Essex with Patrick Topping and then on to Brixton Electric where I’m playing 10–6 on New Year’s Day. I absolutely love playing for an extended amount of time. I can literally play all across the board and conduct what happens in the club. It’s an amazing feeling getting it from nothing to absolutely rocking and making sure everyone goes home with a smile on their faces.

Obviously you can’t give too much away, but any idea what you’re going to play at midnight?

I’m having a bit of a dilemma. I could go one of two ways: Play a massive disco record or play an out-and-out banger by someone like The Prodigy. Whatever I do, I’m going to spend a bit of time doing an edit and making it my own. You’ve got to go with a curveball, though. You can’t just play a big track from this year.

2014 was also the year you became a dad for the first time. Is it tougher being on the road now?

It is tough. I’m in the airport now about to go on tour in America, and it was hard leaving the house today as I’ve been at home with my family for 11 days straight. He’s growing so fast now and becoming a proper person. The good thing is that by the time I’m back in a couple of weeks it will be really exciting as he will have changed so much.

Success came to you later in life than it does for some DJs. In retrospect, are you glad it happened that way now?

Definitely, because I think I’d be dead otherwise. I’d be in the realms of Skream! When I was 25 I was doing stupid stuff I shouldn’t have been doing and getting into trouble. For me personally, being a complete fuck-head and having a successful career are incompatible.

You’re known for your love of jungle. Do you ever think about bringing those influences to the fore in a similar way to what Paul Woolford did with Special Request?

I would love to, but Paul’s already done it! I did a jungle bootleg of (seminal reggae track) Dave Ansell Collins ‘Double Barrel’ about a year ago, and I was going to start a jungle project but then Wooly started doing Special Request. He’s done it so well and made it his own thing so I just don’t think it’s worth emulating. He’s amazing at it.

You’ve got a new compilation coming out on Hypercolour next month. How did you go about putting it together?

There are two discs. The first is upfront records I’m playing now – although I’ve tried to avoid records that are too well known and every track is an edit of mine. The other disc is classics I grew up with. A lot of people who have got into house music in the past few years probably haven’t heard these records before. There’s an old breakbeat record called ‘Gyromancer’ by PMT on there, and stuff Tony de Vit used to play. Then a lot of the records on there come from tapes of Dreamscape raves in the mid- 90s. They were the first real house music tapes I owned which shows how much I latched on to that music and how it has stuck with me.

My hero this year has to be Artwork. He’s the funniest bastard on the planet and before 2014, I didn’t realise what an amazing DJ he was. Technically he’s one the best I’ve played with. He can play absolutely anything and his music collection and knowledge is mind-blowing. He should be a massive superstar DJ, but he’s so laid back, I don’t think it matters to him that much. Then Catz N’ Dogz for playing some of the best sets I’ve heard this year, and my son Ralph for being the coolest little fucker on the planet. The villain has to be Rolf Harris. Everyone thought he was a stand-up pillar of the community, but he turned out to be a paedo.”