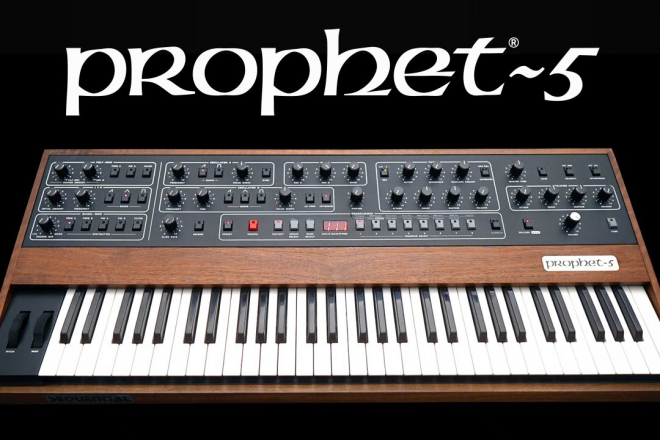 In 1978, the Prophet-5 changed the world. Created by American musician-engineers Dave Smith and John Bowen at Sequential Circuits, the analogue synthesizer was the world’s first fully programmable polyphonic synth that took no time to become an industry-standard instrument. The instrument was made fully programmable by the incorporation of the microprocessor, which was what 27-year-old Dave Smith studied as his day job in the mid-70s. Dave Smith is also one of the founding fathers of MIDI, but we’ll save that for another story.

The Prophet-5 was loved by hobbyist consumers and industry musicians alike, but was most popular in the world of film music and pop music. The range of analogue textures the synth offers is evident from John Carpenter & Alan Howarth’s score of ‘Escape From New York’ (1981), John Harrison’s score of Creepshow (1982), as well as Radiohead’s ‘Everything in its Right Place’ (1999) and Tangerine Dream’s live album ‘Poland’ (1984). The synth is also peppered generously over Madonna’s first two albums, Michael Jackson’s ‘Thriller’ (1982), and West Coast hip-hop albums in the 90s. As Dave Smith puts it himself, “every synth since that’s not a mono synth is basically a version of the Prophet-5”.

The Prophet-5 has gone through three revisions over the decades (Rev1, Rev2, Rev3) – until now: the fourth version (Rev4) has just been announced in October. The basic core of the analogue audio signal path of the new version is exactly the same as the original. The filters of the Rev1 & Rev2 were different to the Rev3, but the fourth edition puts in both: the choice is at your fingers by a simple switch. Much like the original, the Rev4 has two modulation sources: Filter Envelope and Oscillator B, and three modulation destinations: Oscillator A frequency, Oscillator A pulse width, and low-pass filter.

The new unit also has a new functionality: a vintage knob that allows you to dial in (or out) the modern tightness of the synth’s pitch, amplitude and filter envelopes. The new unit also has USB, MIDI, Gate and CV ins/outs as well as switches for aftertouch and velocity sensitivity.

For polyphony fanatics who are dying to play with all (or, the select ten of) their fingers, there is also a new Prophet-10 accompanying this release which has an extra sound card more reliable than the one in the Prophet-10 released in 1981 (which was still revolutionary, of course, but the old unit had various problems due to the second sound card).

“It is interesting to look back at this as kind of like bookends, you know, from Prophet-5 to Prophet-5. I just turned 70, so this is it – this is my birthday present to the world,” Dave Smith remarks, and now every synth nerd is crying.