A new exhibition called Gaki Hip has launched this month in Taiwan and aims to whimsically unravel stereotypes that exist within Taiwanese culture.

Organized by 4b Studios, Gaki Hip fills 15 spaces with everyday objects like bubble tea (actually, an entire room is dedicated to boba), sky lanterns (with Infinity Room vibes) and the neon lights found on betel nut stands. The exhibition is designed to encourage guests to rethink their own definition of culture by interacting using all five senses: touch, see, hear, taste and smell.

The exhibit even has an oversized claw machine filled with pink unicorns where people can sit inside and pretend to be prizes. Visitors will also hear only-in-Taiwan sounds like the singing of a garbage truck and tantalize their taste buds by snacking ice cream swirled with soy sauce. Safety first: don't leave without (literally) fighting COVID! 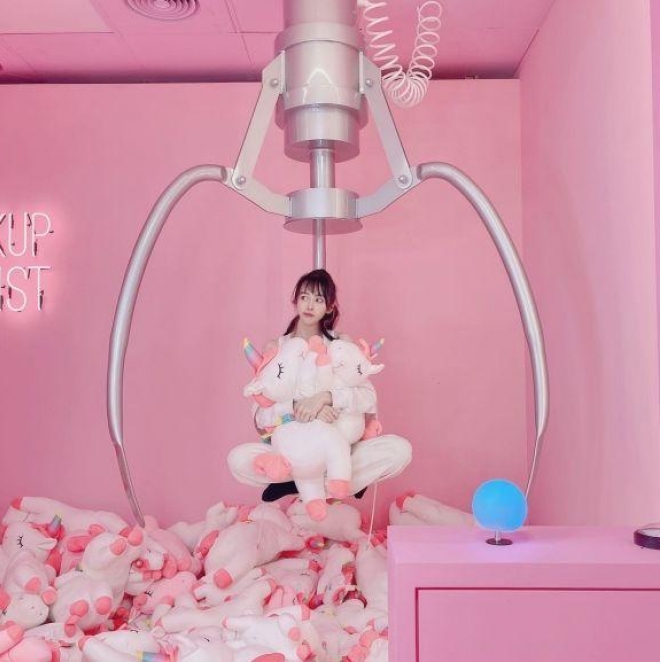 According to interdisciplinary artist Jeffrey Yu (尤勝宏), he said that when something was described as “very Taiwanese” it came with a negative connotation in that it implied cheap and messy. So he turned these national images into what’s described as “chic and modern centrepieces”. Yu co-founded the exhibition alongside David Chen, who was inspired by how social media and Instagram are driving the market.

Gaki Hip has been likened to an Instagram museum and we get why — wild and wacky images have been peppering our feeds while simultaneously reminding us of how much we miss Taiwan. In fact, the name of the exhibition is derived from the Taiwanese pronunciation of “Gaki Hip” which is similar to “taking pictures by yourself” — and that’s exactly what loads of Taiwanese have been doing.

The exhibition runs until March 31 at the Zhongshan District, Taipei. For more information, visit the show’s website here to purchase tickets. Outside of Taiwan? Peruse their IG here.