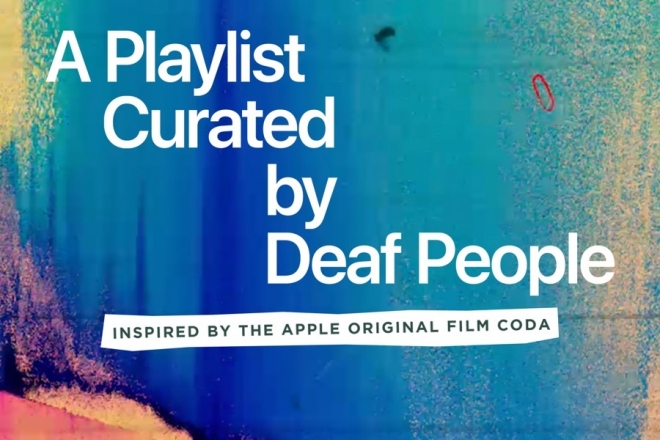 Music is usually an escape to many of us — the lyrics, beats, rhythm, basslines and melodies all play a part in reasons as to why we love a particular tune. However, for the deaf community, it may look a slight tinge differently and A Playlist Curated by Deaf People by Apple Music gives us a brief look into how a community develops their musical orientations.

Apple Music has taken an inclusive initiative to curate a special playlist that is created by the deaf community. The essence of sound for those who lack auditory senses is to use a different approach to experience the power and effect of music, and this is done through the sensation of feeling rather than hearing. The combination of sound waves through objects, reverberations of the basslines, dancing to the treble that flows through the body or reading the lyrics on the sidelines are just a few ways that the deaf community can enjoy music.

Apple has taken a move to reach out to deaf contributors all over the US to select a few of their favourite tracks, talk about how they experience music and understand what music means to them.

Nico DiMarco, a DJ from Washington, D.C, picks his favourite to be Eminem’s ‘Without Me’. “I may not have heard the lyrics, but I quickly realized from the rhythm and beat that this track was one of my favourites, and it’s still a favourite of mine today.”

Jessica Flores, a comedian from San Francisco selects The Luniz' ‘I Got 5 on It’. “I first heard this song when I was 13, but without being able to hear the words, I couldn’t figure out the title or artist. Years later, this song started playing at a house party and my eyes lit up. Even though I still couldn’t hear the words, it was pretty dope that I still remembered the feeling of the beat.”

This playlist also comes in ode to the recent release by Apple TV+’s heartfelt film CODA, which features a deaf family with an exception of one sole member, Ruby Rossi who is able to sing on all the right keys with a dream of studying music in the big city.

In addition to this refreshing initiative, IncInk celebrates the International Day of Sign Languages with a collaboration with the Indian Deaf community by launching five Indian Sign Language (ISL) music videos and a 12-hour livestream today. IncInk’s musical journey stems from the amplification and education of the community by learning about the daily struggles by taking an initiative to focus on inclusivity by creating experiences through art, expression and action. The music videos will feature artists from the community who are also part of IncInk repertoire including Mohabbat, Sangeet, Black, Aur Karo and Vichaar.

Another notable community member is Christine Sun Kim who has made waves in the musical world as a sound artist that is based in Berlin. She uses the combination of sign language, body language and musical notation in her work, which appeared in MOMA’s first major exhibition of sound art. She was also featured on a TEDTalk with a focus on how sound does not only come in an auditory format but how she uses sound through a medium of “enchanting music of sign language”.

In celebration of International Day of Sign Languages, hit play on their playlist to support the cultural and linguistic identity of the deaf community while enjoying the songs that hold a special place for them, which overall speaks true to the saying of "music is a universal language". Listen to it below: