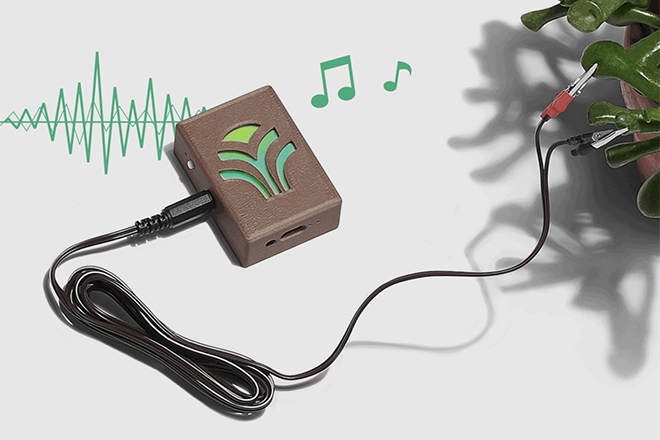 The relationship between humans and plants has long been inseparable. Now we’re told that our plants can sense the music we’re listening to? And they can even produce ambient music? What planet is this?

It’s true, PlantWave is a Bluetooth device that allows you to experience sounds from your plants on your headphones and mobile phone. How it works is this: by attaching electrodes to a plant’s leaves, PlantWave’s sensors are able to turn the biorhythms of the plant to music via musical instruments designed by the team.

You can also process the sounds through a MIDI Synthesiser to incorporate samples into your music. Imagine, adapting elements from nature into your next techno track?

According to PlatWave’s website: “PlantWave measures microfluctuations in conductivity between two points on a plant. The amount of conductivity between these two points is largely related to how much water there is between those points. That changes as plants photosynthesize and move chloroplasts around. The variation is graphed over time, which produces a wave. We take that wave and translate it into pitch."

One of the many innovative ways we humans can connect to Earth is by listening to plant music with PlantWave. . PlantWave users will also be able to share the music of their plants with others by broadcasting their plants through our app, live! That’s right! With PlantWave, you can listen to your plants AND listen to other plants from thousands of other plants around the world. . Music is alive with PlantWave! . #plantwave #plantmusic #plantbased #datagarden #diffenbachia

Nature works both ways and indoor plants are more sensitive than you think. According to research by the University of Western Australia, they found that plants can sense sound vibrations when you water them. In 1970, a couple of artists got together on a project called Mother Earth Plantasia, an album of music for plants. Apparently, they thrive when they hear light music like jazz and classical. So if you’re looking to revive some dying plants, maybe pause the techno for a bit and play them some ambient music instead.

A lot of creative ideas actually come from everyday life, and you can turn the smallest things in life into a new concept. With plant music, it's connecting human with nature on a deeper level — in the same way that electronic music gives us energizing feeling. Different sounds from mother earth can subtly impact you, and giving you a whole new perspective to life.