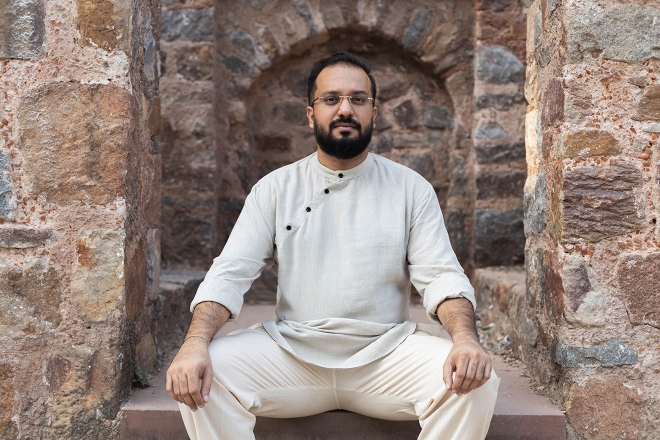 Deep house advocate Hamza Rahimtula’s exposure to US club culture in New York and Boston during the early 2000s proved to be a pivotal period for the now seasoned and accomplished DJ and selector; Danny Tenaglia, Terry Francis, Dave Mothersole, and DJ Heather were amongst a few that fuelled his senses for tribal-tinged house music that teetered on the edge of deep and funky.

Originally from Hyderabad, Hamza has been based in Delhi for almost the last 15 years, from where he operates Wind Horse Records, a now heavyweight label out of India that has garnered global support including from the likes of Richie Hawtin, Dubfire, Peter Kruder, Tom Findlay and Quentin Harris.

He leans heavily on global influences in music to formulate his signature house sound; one of his more recent, and ongoing, outings is the ‘Banjara’ series of albums that has allowed him to unlock a wide network of collaborators from around the world.

Surrounded by a rampantly blossoming scene of wide-ranging electronica and techno across India, Hamza still sees his house-and-disco-rooted sound as niche; but it's now finally finding its momentum through the whirlwind of new promoters, communities and parties that have spurred over the last two years.

Hit play below and get to know DJ, producer and label honcho of Wind Horse Records, Hamza Rahimtula.

My family is from Hyderabad, a city in South of India. We moved to Delhi when I was still a kid and have been living here since then. In between, I spent 7 years in Boston and New York city while attending college and have now been back in Delhi since 2008.

Specific to House and Disco, the scene is just about taking proper form now after all these years of not having any direction. Proper house heads are forming their respective communities in their cities and now the dots are coming together to form a Pan-India house music scene. It's very exciting and the parties now are super fun and getting better and better in terms of sound, production and overall vibe!

I have never really paid attention to trends. Rather, my focus has always been on trying to make music that can stand the test of time. A lot of self reflection so I can continue to grow instead of following trends.

Stalvart is a bomb DJ and his parties have become the best house music club parties in India. He is a real ambassador for house and disco in India and now his label Dynamite Disco Club is doing really well with every release hitting the top 100 charts on Traxsource.

Afro house maestro and producer and DJ par excellence, Unnayanaa is someone who I have always looked up to. I have seen him light up dance floors with his own tracks and what a vibe! He has a very deep rooted understanding of African music and has studied sound engineering which made him go deep into sound design and using Hardware. He is a living legend!!!

Dana Reached out to me to let me know that she was playing some of my tracks in Korea.I followed her on Instagram and some of her videos of her gigs had such amazing tracks. I was so impressed. For me, taste is something that can't be taught. It’s a signature and some people just have the music in their blood .

Pre Pandemic I was just moving along without any proper direction. My production was not sounding tight enough to play on the floor. The ideas were good but the sound was not there yet. I was playing mainly with percussionists and so I did not really have a chance to explore myself as a proper DJ. I always felt that having a percussionist with me was like a safety net, especially in a place like India where they did not know much about house music and preferred the harder sounds. I had no proper management and was literally just hustling myself. We also did not have a crew. Everyone who was playing house music was just pushing themselves and the dots were not connected. There was an absence of community and no one got time to think about what they wanted to achieve. Everyone in my environment just seemed caught up in their own bubble.

Now things have really changed. My production became a lot cleaner and tighter as I had time to learn how to improve my mixdowns so this really paid off. Even though I am super critical of my own music, I can hear the difference in the sound quality and am pleased to see the progress. We also formed a collective called Ngoma Collectiv to push house music in India. The collective is made up of Stalvart John, Farhan Rehman, Unnayanaa and myself. We are managed by Sainath Bhagwat and since our inception, we are on a mission to spread more disco/house/afro and other more house related genres in India. Even though we still have a long way to go, we are all playing a lot more now and we are seeing the community growing simultaneously. People are opening up to our sounds and its definitely very exciting.

I have used some really special tunes here. Normally I am not so into making mixes. It's not my thing to be honest. I prefer to produce music and play in front of an audience. However this time i really dug into my collection and i just chose tracks that are speaking to me at the moment. A lot of these tracks are timeless in my opinion. They are not really following a trend and I feel I will be able to play them in the future as well. Even though I also play some more mysterious ethnic vibes, I wanted to stay focused on this mix and showcase more of my jazz-funk and Afro/Latin influences. I used to go to Ceilo in NYC and hear so many fabulous DJs and it's there that I learnt about real house music. It's in Ceilo that I heard tracks that had massive grooves and crazy musicianship. This feeling made me really respect people that produced house music and I got inspired to commit myself to this genre. In other words, I was just trying to recreate my NYC experience from back in the day when I was just starting out.

I used Ableton to record this mix

You can catch me opening the Four Tet Presents showcase at Magnetic Fields in Alsisar, Rajasthan (9 to 11 December). Really looking forward to this one.