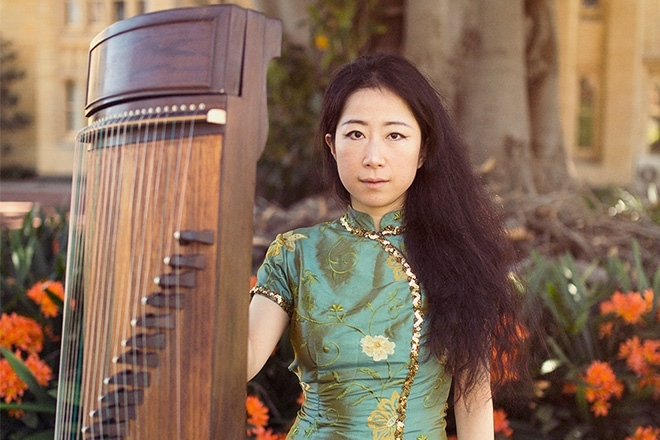 Experimental composer and acclaimed Guzheng player Mindy Meng Wang has conjured up an exhibitionist-style electronic piece that bends through both time and genres.

Not only is ‘Sleeping Tiger on the Bund 蓄势待发’ a debut release on Melbourne-based label Music in Exile, but it’s also a first collaboration with Australian producer and radio presenter Tim Shiel who is best known for hosting ‘Something More’ on Triple J and ‘Arvos’ on Double J networks.

Wang has been studying the Guzheng since the age of seven, and has been become a pioneering musician for it — she’s repeatedly broken barriers with her wide outlook music, bringing the Guzheng from its first-known origins around 500 BC to the 21st Century and the divergent world of music we have today. She’s worked with plenty of high profile artists over the last few years, including Gorillaz and Regurgitator, and she’s also been someone who’s branched out through her various influences such as jazz and western classical, hence the unique collaborations. The Guzheng and its sonic counterparts seem to be what she draws from the most.

‘Sleeping Tiger on the Bund 蓄势待发’ is the first single from Wang’s upcoming EP ‘Nervous Energy’ which is due to be out on March 12 this year. On the musical tip, it’s edgy, genre-bending and puts the Guzheng in a far-flung future that we didn't know would arrive so soon. On the philosophical front, the EP aims to fuel her collaborative goals of redefining the traditions of Chinese music, and where she can, lend a voice for young female composers of Chinese origin. This vision aligns perfectly with the label’s — Music in Exile is a Melbourne-based artist-focused initiative, that focuses on cultural and linguistic diversity within Australia. They also operate as a no-desire-for-profit project with all income going straight to the artists.

You can check out Mindy Meng Wang ‘Sleeping Tiger on the Bund 蓄势待发’ below and pre-order the 12" vinyl release for her 'Nervous Energy' EP here.