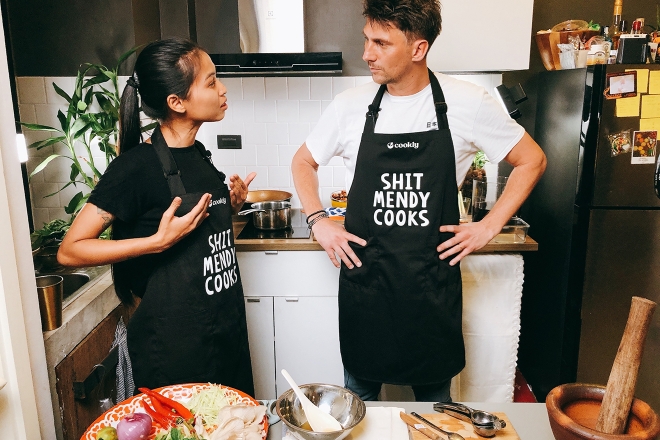 Before the world started ending and DJs still practised the lost art of touring, Thomas from Pan-Pot landed in Asia for a whirlwind tour that would ultimately be his last before COVID struck. But luck also landed him a gig with Mendy Indigo, who took the opportunity to invite the DJ and his family to dinner. She filmed the event and turned it into the first episode of the long-awaited Shit Mendy Cooks series.

In the debut episode, she takes viewers through the Mak Nam Fresh Market in Bangkok for a firsthand look into sourcing some of the titillating ingredients that are at the core of Thai cuisine. She goes on to teach Thomas how to make a couple of Thai dishes, including deep-fried bamboo worms, green mango salad, wing bean salad with shrimp and, of course, stir-fried morning glory with oyster sauce (because no Thai meal is complete without).

They do more than just cook and their banter explores the difference between some chilli peppers, debunking myths about Thai food and finally answering who of the Berlin-based DJ duo is pan and who is pot. The episode ends with clips from their gig later on that same evening at Mustache in Bangkok.

Watch the episode below:

DJ Mendy Indigo is a DJ in Thailand known around the world for being one of the leading ladies when it comes to techno in the Kingdom. She was once featured in Mixmag's Global Dancefloor series alongside Nakadia. In her Shit Mendy Cooks series, she invites renowned artists from all around the world to join her in the kitchen while she teaches about Thai culture through cooking local dishes. Seth Troxler will appear in episode two, due out…soon.

Missing Thai food? Mendy injects a taste of Thailand into your kitchen via five classic Thai recipes in a Yum Cha Chat from November. Find them here.