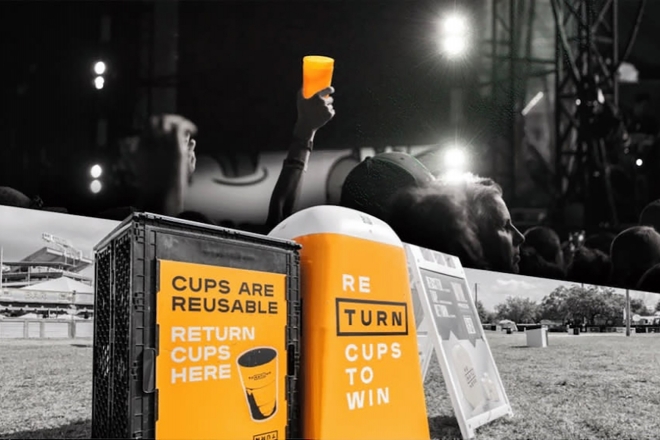 Gotta love shuffling on the dance floor and hearing the sound of…plastic crunching under your feet? It happens at the best of events and the bigger the festival, the bigger the problem—and that's why our ears perked when we heard that Live Nation, one of the biggest beasts in the game when it comes to festivals and events, was looking to tackle the problem with a technology called TURN Systems. And their investment in the solution is costing them $5 million.

TURN is an environmental start-up that aims to help the events industry do away with single-use cups. How it works is the company provides reusable cups, collection bins and mobile washing systems, which according to their website, are 700% faster than traditional dishwashers.

One of the ways this system is different from a more traditional reusable cup rental system is that it doesn't require users to leave a cup deposit. Instead, a reusable plastic or aluminum cup is handed out to all attendees. When the vessel is empty, a scannable code appears and opens a custom-branded collection bin or pod. Not that you want to carry a cumbersome cup home with you, but guests are given rewards on the TURN app to discourage "accidental" walkaways.

The technology also uses incentive-based software that allows the user (or even better, the drinker) to calculate their impact, so they understand that simply using a non-disposable cup can make. And according to a recent study by Live Nation, 82% of concert-goers say they strive to maintain an environmentally sustainable lifestyle—so the data has the potential to be moving on its own.

The company goes on to say that a single reusable TURN cup can displace up to 100 single-use cups, breaking even in its environmental impact in as few as three uses. Those 100 single-use cups would otherwise be headed to a landfill.

Live Nation says that trials are showing their system is working and has already tested the system at events like Bonnaroo Festival in Tennessee where fans returned 88% of the cups. At PNC Music Pavilion in North Carolina, fans returned 90% of the cups and the venue avoided using 13,000 single-use cups as a result.

Live Nation plans to continue rolling out the reusable cup system at "participating" venues and festivals, although, at least for now, this looks limited to the US. But it's a start, and the start sees the company already projecting to displace more than 1 million single-use cups this year alone.

Musician Jack Johnson, a known advocate of green touring, says: "I'm excited to see Live Nation taking their commitment to reduce plastic pollution to the next level by launching reusable cup programs at some of their concert venues this summer. It's inspiring to see a music industry effort to offer alternatives to single-use plastic and to give music fans the option to choose reusables."

Live Nation CEO Michael Rapino says: "By investing in TURN, Live Nation is able to make events at our venues and festivals more sustainable. By rolling out real-world solutions at scale we hope this helps the whole industry find solutions."

In the age of greenwashing and sustainability being more of a go-to-market buzzword than an actual make-a-difference initiative, we're not sure what to think just yet. But, with Live Nation being one of the world's largest live entertainment companies, it's a big and expensive step that we hope isn't all for a show, and instead sees the brand taking its toll on the planet seriously.

Mixmag Asia is committed to providing coverage to those looking to lessen the impact of the music industry on our planet. Read more sustainability content from Mixmag Asia’s Green Room series here.
Load the next article