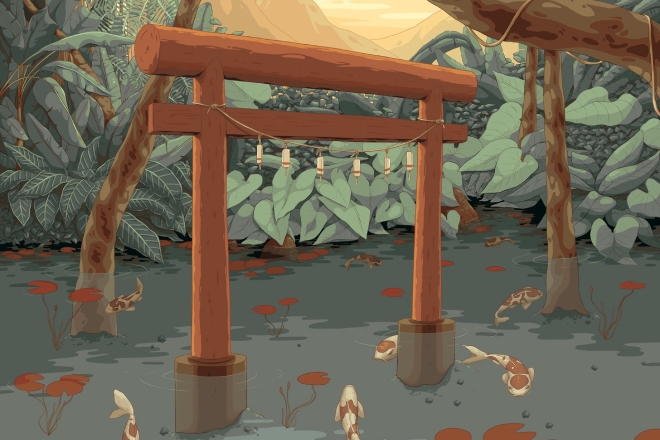 What do you get when you mix Japanese film music with cult hip hop vibes and ambient electronics? Listen to Kennebec's latest release 'Abundance/In the Reeds' and you’ll find out the sonic sorcery Kennebec has spent the past two years incubating. 'Departure' – his upcoming debut album, brings out the best of both worlds, with a clear nod to the lyrical, melodic tunes created by legendary Japanese soundtrack composer, Joe Hisaishi.

Kennebec is a project created by American composer and musician Eric Phillips. His music is greatly influenced by Japanese composer Joe Hisaishi, and his signature sound of Hayao Miyazaki's studio films – an indispensable element of the well-known films. Apart from Joe Hisaishi, Kennebec was also inspired by an eclectic range of sources, from hip hop artist Nujabes, to Australian singer Taylor Crawford to Tycho’s ambient electronic vibes.

'Abundance/In the Reeds' is the second release from the album that dropped last week. It features a lyrical flute playing a folk-like tune alongside the bed of triple-time electronic beats creating a brisk rhythm, with classical guitar layers – ultimately producing a mellow, yet optimistic Asian thematic sound.

“I wanted to make something bold and ambitious that sounded fresh and different. I think I took a big swing with this album...” Phillips says about 'Departure'. “To me, the songs sound like journal entries — they bring me back to those specific times and places, but I also write music in an active, intentional way to try and summon the better parts of myself day to day to come to life and fruition. I have to be doing something new and experimenting to be inspired musically and I also wanted the music to be evocative of that sense of discovery in an almost physical sense — a sense of journey, motion and exploration of new spaces.”

Kennebec's 'Departure' will drop on February 14 via Night Time Stories. Click here to pre-order. You can listen to the album trailer below: