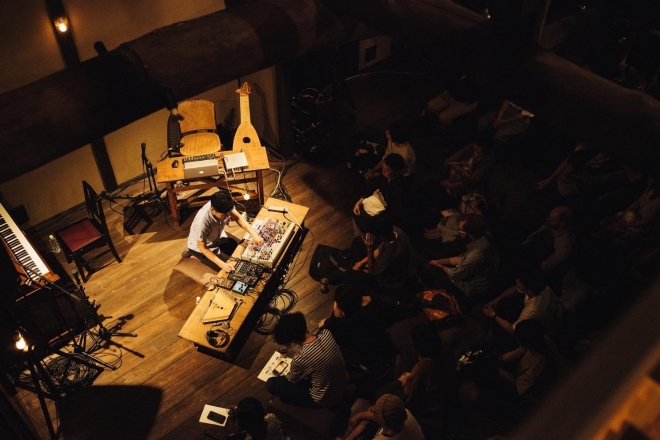 After living in the big cities of Tokyo and New York, Hiroshi settled back in his hometown just outside Japan’s capital in 2018. He leans towards exploring the more scenic and serene aspects of sound through guitars, modular synthesisers and tape machines. Not one to shy away from his roots, he delved into the world of Japanese traditional gagaku instruments and dance — the hichiriki and biwa — which was guided by musicians from the Imperial Household Agency.

Sound and silence — two generally contradicting terms — are what he skillfully incorporates in his audio productions. For Hiroshi himself, music is not about being accurate when it comes to rhythm or pitch. Instead, he focuses more towards the texture and spaces between each note, gravitating towards emphasising how they feel. Serendipity plays a key role in the compositional process — you’ll hear tranquil comings and goings of certain nuances throughout his pieces. Coincidental, yet orderly.

Hiroshi believes that experiencing art is a way for audiences to conversate with themselves. When any form of artwork is stripped away of the meaning specified by the artist, audiences are left with nothing but their own experience of it. In this case, he invites us to find our own comprehension towards music, the environment and psychological state.

Through his most recent 7-track album ‘It Just Is’, Hiroshi hopes to encourage listeners to explore more for themselves. Using only acoustic instruments in the recording stage, he then processed all of the sounds with eurorack modules and tape machines. The album title itself is a quote from the book ‘The Things You Can See Only When You Slow Down’ by Buddhist teacher and writer Haemin Sunim — yet another hint to tune out and absorb surroundings on a deeper level.

Stone gardens at zen temples, especially one at Ryoanji, are the fitting inception of this album. Ryoanji’s stone garden was particularly known to inspire artists such as John Cage and Andy Warhol. Without anyone knowing who actually built the garden, its clean slate represents nothing and no one — a characteristic that encourages people to admire it without any knowledge or prejudice, just like what he tries to convey in his latest release.

Experience and immerse yourself in Hiroshi Ebina’s ‘It Just Is’ here.