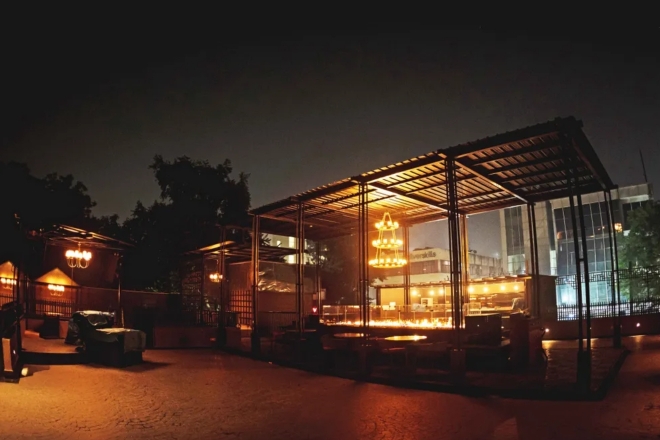 A fight broke out on the night of Monday, August 8 around 2 am at Casa Danza, a night club located the city of Gurugram in the northern Indian state of Haryana. The brawl was caught on a viral video and shows a group of men brutally beating guests on the street, some even using sticks. The involved club personnel have now been arrested.

Instagram user @gtownfood00 documented the incident, along with a caption explaining in detail about how the fight started.

One of the male bouncers had inappropriately touched a female guest as she was entering the venue. A male friend from the group retaliated towards the harassment but was met with aggressiveness by the bouncer, pushing and abusing the guest who contrastingly “maintained his calm & did not raise his hand”.

The female victim sought help from the club’s two managers who happened to be within reach of the skirmish. Unfortunately, her attempt to diffuse the situation only led to more brutality as one of the managers instead “asked the bouncers to go ahead and beat the guy and the girl”.

Succumbing to mob mentality, other bouncers joined and started beating members of the victim’s friend group using sticks. One of the guests was beaten up so badly he became unconscious.

After countless efforts of calling the police to no avail, the victims were able to connect with India’s Women Helpline, reporting the incident and requesting protection from the authorities. When police finally arrived, not a single female Constable was in sight. Not bothering to speak to club authorities, they merely ordered the victims to go to the hospital and file a complaint after their medical paperwork had been done.

Read this next: "Ridiculous double standards": Why Jaguar is fighting against the dance music 'boys' club'

According to India TV News, Casa Danza has issued the following statement; "We empathetically deny the molestation allegations surrounding the bodyguard, as evident in the surveillance footage that we have reviewed, confirms that there was no misdemeanour or untoward act by such security agency personnel against the alleged female or any other member of their group. It is pertinent to point out that we have adequate female security personnel as well to assure female protection at the club."

Manaal Oomerbhoy was one of the few who took to social media in voicing her frustration about the incident and India’s culture of violence and abuse against women. She lived in India from December 2016 to February 2022 and worked for the online radio boxout.fm. Now based in New York, she was surprised to receive messages saying her reaction was extreme — perhaps even more than the violence that took place.

“This normalisation of intimidation and harassment is of course the exact opposite of what dance music culture historically has been all about — inclusivity and the creation of safe spaces for marginalised people. It is ironic and depressing that this music is being appropriated and played in spaces where women are actively harassed — that too by the very people that are supposed to be watching out for their safety, which is mind-boggling,” she explains.

Read this next: Even in a pandemic, men won’t stop sexually harassing women in nightclubs

She also exhibits her disappointment towards the lack of reaction by the electronic music industry towards this incident. “The only response was that DJs kept announcing shows at this venue, as if nothing had ever happened.”

Shockingly, this is not the first time employees at Casa Danza have been reported of mistreating female guests. Though complaints of groping and inappropriate touching have been made before, the club's management continues to take no action towards the perpetrators and instead banned the complainants from the venue.

On a lighter note, there are groups out there that women can reach out to should they feel the need for support, such as shesaid.so. Having built the first community of women and gender minorities in music, their mission is to achieve empowerment for all based on their unwavering feminism. For those in India who would like to get in touch, please reach out to their official Facebook group.