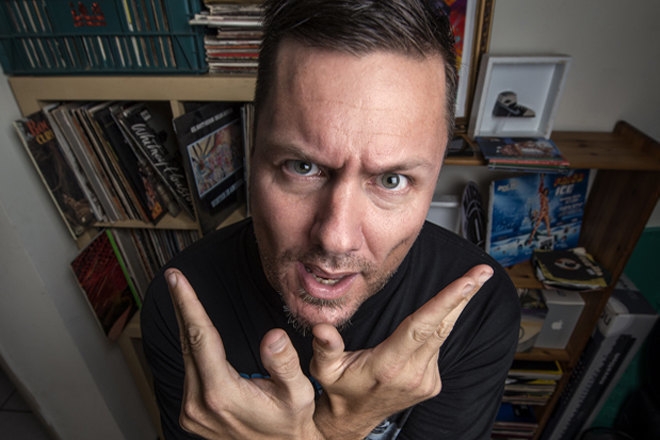 Who: DJ Marcus Aurelius
Where: I’m from Taipei, Taiwan via Warren, Ohio
Sounds like: My sound is the sound of order being made out of chaos. I love to amalgamate different styles of music into a whirlwind of danceable rhythms. I try not to sound like anyone else, but also sound like everything I enjoy.

“A man’s worth is no greater than the worth of his ambitions,” said the stoic Roman emperor Marcus Aurelius almost two thousand years ago – he was clearly frustrated with people talkin shit. Little has changed two millenniums later except now we have our own exemplary Marcus Aurelius to show us the importance of ambition. Or to shame us when it isn’t clear.

Born a few decades ago in Warren, Ohio, DJ Marcus Aurelius is arguably Taiwan’s most ambitious, productive, reliable and creative human being. And he’s also a DJ. He’s a DJ that spent 11 years practicing and playing nearly every genre of music known inside the sonic stratosphere, his tastes beginning somewhere around the 1960s when funk was flowing through America stretching to the bass heavy big room sounds of today.

Marcus’ ability to segue between genres is flawless and the way he can breathe new life into songs your parents probably jammed to is on point. But everything he plays is just a layer added onto his fundamental sound – hip-hop. With influences like Jazzy Jeff, Diplo and Skratch Bastid, the path he is on sounds just right.

“Quite simply the best DJ of all time forever,” he says of Jazzy Jeff. “His skills, passion for good music, and ability to rock crowds everywhere in the world by playing the music he likes is unfuckwithable.”

And in the footsteps of influence number two, together with Frog in a Sock, Marcus has championed a music culture in Taiwan that revolves around the raucous ragers they throw, from summertime poolside slammers to massive multi-room holiday hoedowns.

Whatever the venture, Marcus is a perennial part of the Taipei music map and his efforts were finally rewarded after he took home first place at the Red Bull Thre3style Taipei qualifier in May of 2015. Again, a lightweight nod to his top three. He says of the win that after putting blood, sweat and tears into the events for three years, he feels liberated to have finally made it.

On account of his Thre3style win, and also just because it was high time that he be interviewed rather than doing the interviewing himself (Marcus has been contributing to a music-centric column called Vinyl Word in the Taipei Times for eight years), Mixmag Asia picked his brain to find what fuels this modern day Renaissance Man and underneath a façade of will and wit, we found a guy who at the end of the day just wants to get in a bath and kick it. With a sponge. And Dr. Dre. 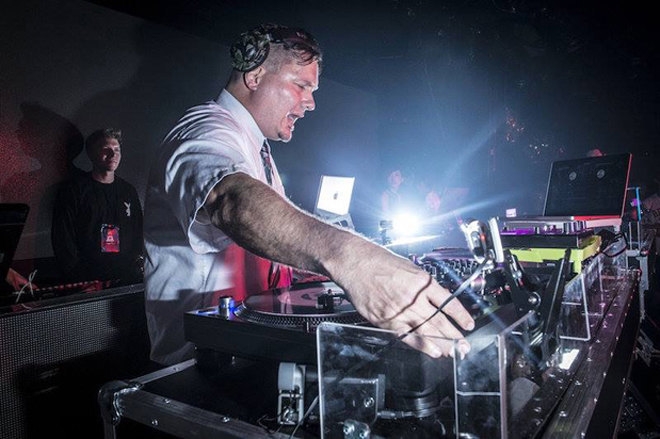 What’s in the name Marcus Aurelius?

Marcus Aurelius was the last of the great Roman emperors and my mother was a hippie and liked the way it sounded. I hated my middle name growing up because on the first day of school, the teachers would call roll and never be able to pronounce Aurelius. So my friends would tease me by saying “a real ass,” but now it’s working out pretty well for me.

What was the last book you read?

Brothas Be, Yo Like George, Ain’t That Funkin’ Kinda Hard on You?: A Memoir. George Clinton’s eye-opening autobiography with stories about his childhood, all the bands his been in, his crazy drug use, and how bad he’s been ripped off by people over the years.

If you could teach a class on the art of DJing, what would you teach?

The first thing I would teach is to play the music that they really feel. If you like it, then you will find people to enjoy it with you and then you can build on that.

You’ve achieved one life goal with your Red Bull Thre3style win. What’s the next life goal?

It’s been a crazy couple of weeks for me as I quit my cubicle job and focused on practicing for Thre3style and then won the Taipei semi-final. I guess my next life goal would be to win the Taiwan finals and also be able to survive as a full-time freelancer.

What does everyone get wrong about you?

I think maybe people think I have a hard shell at first, but after years of having people ask me where I’m from when they first meet me, I’m not having it. I want to talk to people that are interesting or having exciting things to say, not just small talk about location origins.

I use two turntables, Serato DJ, Dicers, Rane 62 mixer and a new toy, Pioneer SP1 that I got two weeks ago.

What’s the biggest mistake you ever made?

I think I was probably pretty terrible to some ex-girlfriends at one point in my life.

It’s impossible to label you as any one kind of DJ – you move effortlessly between hip-hop, funk, soul, dance music, 80s, 90s, and so on. If you had to choose only one genre to play for the rest of your life, which would you choose and why?

I am hip-hop through and through. I’ve lived, breathed, and been hip-hop since I first heard a Public Enemy tape and I’ll be playing Dr. Dre during my sponge baths at a nursing home when I can barely take care of myself.

My goal has always been to make sure whatever I’m involved with is enjoyable for most people. I want people to know that no matter what show, gig, party, or event I’m at, there will be excellent music, a great vibe and some interesting people to get to know.

What would you be if you weren’t a DJ?

Since I have like five jobs, I guess I would just be doing that stuff, but I’ve always fantasized about being a professional kite surfer for some reason.

You are known to take DJing very seriously and practice on the regular, something many DJs have given up on. How important is practicing and how many hours should be invested? Can talent be achieved through practice or must one be born with it?

There’s a story about a guy going to the bookstore and picking up the book called How to Achieve Anything. Inside it, there was one page with one word on it—practice. I think anything can be learned with desire and hard work. Practicing is fun because you learn new things and find out new ways to do old things. I don’t think there is a time limit on practice, but if I had to pick a number, I’d say Malcolm Gladwell’s 10,000 hour theory is about the right amount of time before you become an expert.

I didn’t come from a musical family, and I don’t know a think about musical theory, but I do know what is funky. I know what moves my heart and soul and makes my neck bob. Being born with musical talent helps, but I think people can learn anything by practicing.

What’s the fuel in your fountain of youth?

The key is keeping a young state of mind and still pushing yourself to do new things. Being older is great because you know a lot more things than you did when you were younger, but you aren’t as stupid as you once were.

What’s the best and worst thing about living in Taiwan?

The best thing is that anything is possible. If you want to open up a noodle shop on the street, you can do it. If you want to throw a party on the mountaintop at a teashop, just go talk to the owner. You can probably work it out. Anything you can think of can be done in Taiwan.

The worst thing is easily being away from family and friends. But to be honest, with Facebook and Skype, I’m probably closer to many of my friends now than when I lived down the street from them.

You have yet to step into a studio. Why and is there ever going to be a transition from DJ to producer?

I have a big list of things I want to do now that I don’t have to get up in the morning and sit in a cubicle all day long. Very close to the top of that list is to learn the ins and outs of the programs to produce music. I know I have it inside of me, and now is the time that I will be making beats, mixes, tracks and all kinds of other weird shit that I’ve been putting off for a decade.

What’s the most ridiculous thing that’s ever happened when throwing a party?

One of the first parties I ever did was a guerilla beach party called Booty and the Beach at Baishawan. I borrowed a set of speakers and asked the lady selling drinks at the beach if we could plug into her electricity. I think we bought three tiki torches for decorations. We thought maybe 100 people would come and more than 800 people showed up. Halfway through the party, a rather large female and her extremely small boyfriend started having sex right in the middle of the sandy dance floor. The crowd was cheering them on as he smacked her on the ass and everything. They disappeared until a few years later when I was playing at a bar where they had stripper poles and we had a pole dancing contest. The big girl jumped out of the crowd, onto the pole, and won the contest before she even swung around once. I have no idea what happened to them after that, but thank goodness that was before social media.

How do you stay sane?

Sanity is madness put to good use. In life overall, I try to have a positive attitude about everything and smile a lot. When you do that, you can get away with murder. Also, long baths and having access to good music all the time helps.

In your winning Thre3style mix, you sampled a bit of a dialogue on celebrating what’s always been great about DJing. What is that great thing to you?

The slickness of that part was that it was one of the judges for this year and the 2012 Thre3style world champion, Four Color Zack, in Taiwan last year taking about what makes good DJing. He says that the Thre3style celebrates the open format DJs and I totally agree. When I go out and hear other people play, I want to be surprised. I want to be blown away. I want to be excited that someone played something different than the normal bang bang bang at the club. I want to see some one rock it with their personal style. That’s what I love about deejaying is that you can learn so much about someone by watching them play.

What’s the biggest problem in the world today?

I think income inequality is going to cause a lot of problems in our lifetime.

I love it most when…

I have a bit of time to chill next to water with a fine alcoholic beverage in my hand.

If the world were ending, what’s the last record you would play?

If we are going down, might as wall enjoy the horns of Spottieottiedopaliscious by Outkast one last time.

In five years, I will be…

Happier than I am now, which is crazy cause I’m already off the scales on the contentment charts. Also, in five years, hopefully I’d be giving some funk lessons to small children that contain at least half my DNA.