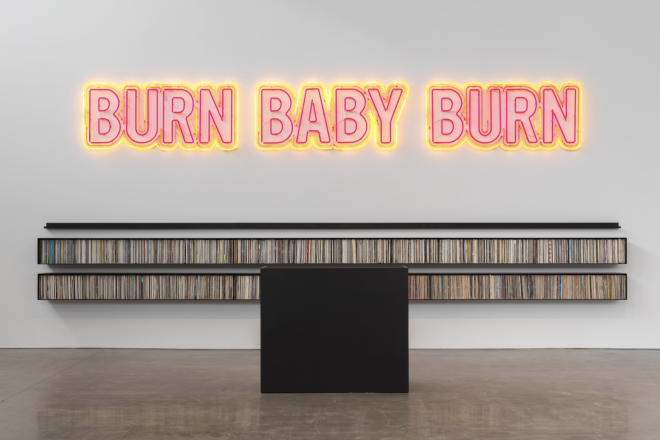 A selection of records from Frankie Knuckles personal collection is now on display in New York’s Gagosian Gallery.

Visible on many of the records are blue or red dots that allowed him in a dark club environment to select records quickly from his bag. Red dots indicated a faster, more intense record and blue indicated wind-down tracks.

A long-time friend of Frankie and founder of Prescription Records Ron Trent spoke to the gallery’s supplement Gagosian Quarterly about the impact of the record collection: “You felt like you were being taken to another realm of consciousness. That’s the best way I can put it. And there was a level of mastery there.”

“It was a shamanistic kind of thing, like a shaman who wants to take you on this journey and these are the resources he’s using: vinyl, tape decks, MP3s, whatever, to sonically get you out of this world. So that’s what it was like to go hear Frankie Knuckles. It was out of space, brother [laughs].”

“His approach, his psyche, his emotions, and his energy are still here. As we know through science, energy doesn’t dissipate, it just changes form. It’s still floating around, you know.”

You can learn more about the collection at the Gagosian here.