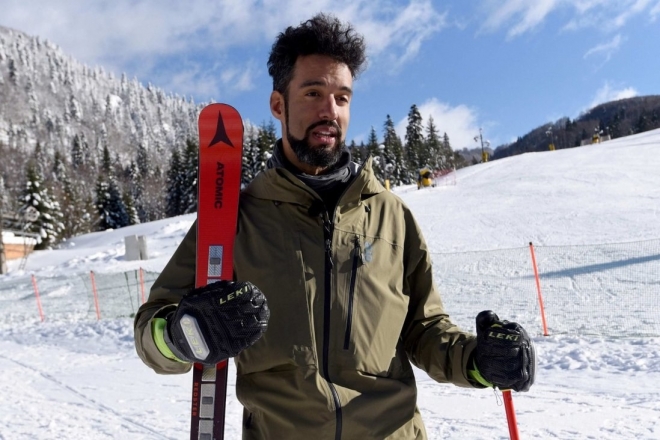 When former Hong Kong DJ Benjamin Alexander arrives in Beijing next month, he will become the 15th person to represent Jamaica at the Winter Olympics and also the first-ever Jamaican alpine skier to compete — a story that rekindles memories of the 1988 film Cool Runnings about the legendary Jamaican bobsled team that inspired the movie (Alexander counts Dudley 'Tal' Stokes from the IRL team as one of his mentors).

Born in Northampton, England, 38-year-old Benjamin Alexander started his DJ career in the UK in 2000 and, after moving to Hong Kong, became a well-known DJ there with a residency at VOLAR and playing clubs like Midnight & Co. He also connected with the Robot Heart community and played regularly on the sound system stage at Burning Man. His DJ career lasted more than a decade until he played his last gig in 2018 before going on to focus solely on skiing.

In fact, it was a DJ gig that took him to Whistler in Canada in 2015 where he was exposed to skiing for the first time ever during a heli-ski trip. He wasn't even there to ski, he was there to party but after he saw his friends disappearing down a mountain, he likened them to superheroes. He took 27 tumbles on his first trip down the mountain, but since then, he's devoted himself entirely to the sport. Despite not ever having a full-time coach, last week he secured an Olympic qualification when he finished seventh in the giant slalom at the Cape Verde National Ski Championships in Liechtenstein on Wednesday.

Unlike many athletes who train for their whole lives to get to the Olympics, Alexander spent years strategizing his own way. Aside from skiing, he tapped into his obsession with data and analytics — spending between 30-40 hours delving into the FIS database "trying to look for patterns, trying to look for races that might be a little bit more favourable" — and leaned on his father's place of birth to qualify as part of Jamaica's national team.

BREAKING: Benjamin Alexander 🇯🇲 made history by becoming the first Jamaican skier to qualify for the #WinterOlympics in giant slalom (alpine skiing) under the B criteria. #TeamJamaica #GuhHaadAndDone

Coupled with a fearless approach and a dream to find success championing diversity in winter sports as a Black athlete, Alexander is now confirmed to compete next month in China — the Beijing Winter Olympics begin on February 4. But his goal at the games will be less about competing and more about encouraging the next generation of Jamaicans to compete at the international level.

"I don't want to take anything away from the people who started from the age of two," Alexander said to Sky News. "My story is all about participation and hopefully inspiring the next generation of Jamaican children to start earlier than 32. I've already found who will be our representatives in alpine skiing in 2026 and they are going to be much better than I am."

"I've already got my gold medal, my gold medal was qualification," he said to RA. "And my medal ceremony will be the opening ceremony when I hopefully hold the flag [...] I'm going up against people who have been skiing for 30 years and have had hundreds of thousands of dollars invested into their training per year. These people will show up with 20 different types of skis to choose the perfect one for the temperature and the conditions on that day. Those guys are Formula One and I'm like running around chasing behind them in a go-kart."