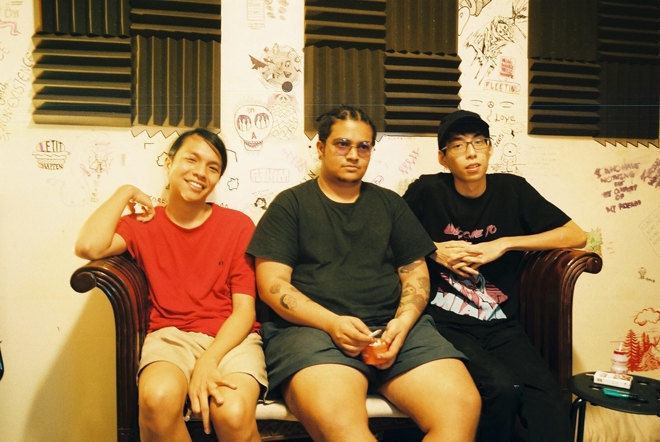 On a recent Wednesday, three of the island’s prolific 20-something producers hung out together for the first time.

Fzpz, Leon the Professional and F A U X E sat in the latter’s doodle-covered home studio, realizing that it took them over a year to physically meet up despite being long-time fans of one another’s work. “We all spend a lot of time at home,” they laughed.

The three are among an ever-expanding crop of emerging Singaporean bedroom musicians, whose maturity of work well eclipse their age. Each gentleman has carved out a name for himself with self-produced tracks that traverse a range of genres, from experimental jazz to bassy hip-hop, and while it may be tempting to categorize the three as beatsmiths, the label isn’t wide enough to address the complexity of their work.

Their respective stylistic devices vary—fzpz works out of a MacBook Pro and a MIDI keyboard, while Leon and F A U X E play around with five machines each, including a Rhodes piano—but the end product shares a similar quality of cocooning listeners, captivating ears and mind from beginning to end.

Since his first EP in 2012, music editors have been unable to keep up with the constant stream of output that’s now synonymous with 25-year old F A U X E, or Kris Grosse. This year, alone he put out five major releases, the most recent of which was unveiled on the day of this interview. From homegrown verses on ‘Jury,’ [released under his IAMNOTARAPPER alias, one of many], to the ambient noise of ‘Pl3se 3njoy Th3 R3freshments Whil3 You List3n To This Collag3,’ listeners may not know what to expect from a F A U X E joint but they always receive honesty.

22-year old fzpz or Jarren Lim quietly exploded on the local scene in 2015 while still in mandatory army service, with releases on homegrown labels Darker Than Wax and Phyla as well as SoundCloud collective Top Cats. His blends of lush synths and boom-bap earned him a producer spot on Miki Rose’s ‘Replay’, which premiered on BBC Radio 1Xtra this July, and saw him spin in Taipei alongside China’s underground bass king Howie Lee the same month.

Leon Wan, who’s recently been appearing on Singapore’s DJ circuit, is half of Young Spice (YS), a production duo that originated in the 25-year old’s previous Melbourne days. Since their first album Basic Couch Formula—a selection of blissful beats in the style of Large Professor—dropped early last year, YS has evolved to craft dreamy house gems, such as ‘My Way 2 You’ that was featured in a compilation by Sydney-based record label Plastic World in August. Basic Couch Formula II is due out early next year.

A fondness for eclectic samples is another common theme among the three.

F A U X E has incorporated everything from the Azhan, or Muslim call to prayer, to lines from comedian Eric Andre’s infamous ‘Bird Up!’ skit, while fzpz once used the sound of the Macbook’s volume buttons in a cypher. Leon meanwhile has a knack for layering samples culled from vinyl and creating a new melody from the combination.

But what’s particularly impressive about each artist is their rapid-fire sense of conceptualization. Whereas most young artists tend to fall into the trap of overthinking their sound, image and tools, these guys definitely don’t.

“I can finish a song in a day, I don’t think too much about it,” says Jarren. “It’s a kind of unconscious thing,” agrees Leon.

“A track can take me anywhere from 5 to 20 minutes…It’s more about the process, not the result,” F A U X E explains.

And it’s precisely that improvised, natural feel that appeals to their respective fan bases. Maybe it’s because all three come from a live band background, or simply the fact that they act on their instincts.