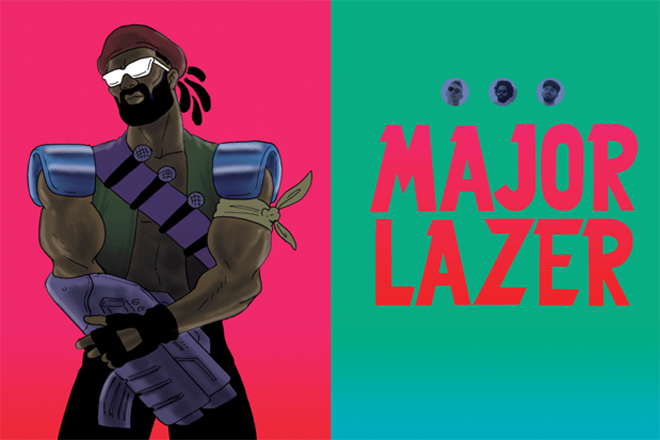 The suburban venue for the Mad Decent Block Party in Phoenix, Arizona bears a closer resemblance to Frontierland in Disneyland than a traditional concert venue. Donkeys hee-haw in the background. Cows are lined up at the side of the fence. The trio and a few members of their crew look out of the window in disbelief – but 45 minutes before Major Lazer go on stage, thousands of fans are losing their shit as lights flash and the sound of Dillon Francis blares from the stage.

In the Wild West-themed restaurant currently doing duty as a dressing room Diplo, Walshy Fire and Jillionaire eat their pre-show meal, nurse bottles of water and talk to their trainer about their pre-show exercise routine. When Diplo disappears, Walshy, Jillionaire and the crew poke fun at the Major Lazer founder’s choice in accessories — in this case a black leather Alexander Wang man purse – until he returns to defend himself from the good-natured ribbing. After hearing the crowd go nuts for Francis spinning their smash ‘Lean On’, Diplo and Walshy playfully barrack Jillionaire for giving Francis permission to play the song tonight. Suddenly, though, it’s show time.

As they are driven in a large van to the main stage, the mood changes. The jokes and chatter remain, but become more measured and deliberate. With ‘Lean On’ and third album ‘Peace Is The Mission’ further propelling Major Lazer into the crossover stratosphere in 2015, Diplo has seen the project gradually change: no longer just a fun reprieve from working with some of the biggest names in music, it’s now become a viable entity. 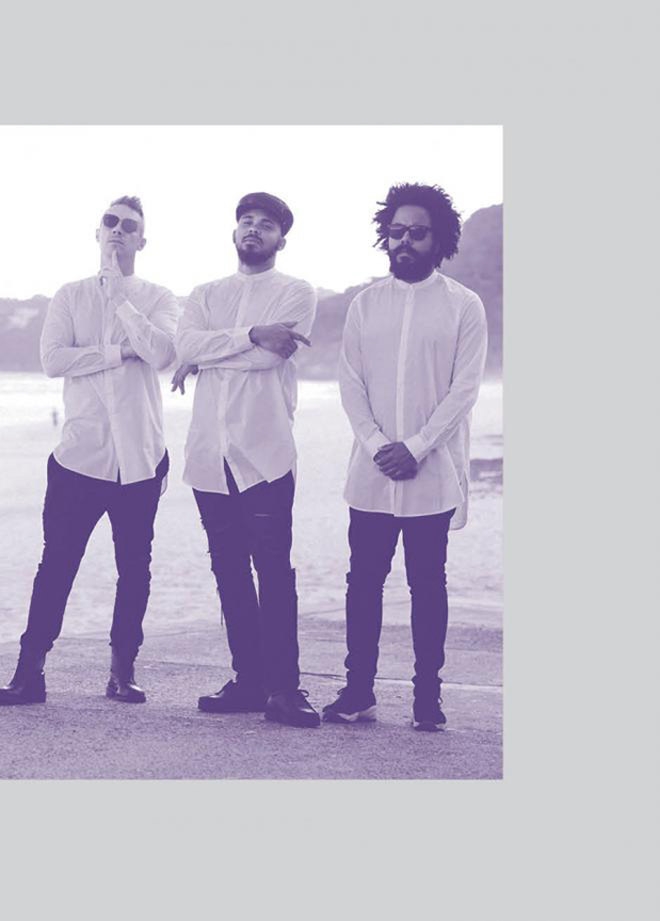 Born in Mississippi, raised outside Fort Lauderdale, Wes Pentz has always been fascinated by music (although at first it was dinosaurs – his childhood nickname, Diplo, comes from ‘diplodocus’). Growing up in what he describes as an “affordable” neighborhood in Broward County, Diplo’s neighbours were as diverse as any area in South Florida.

With a Jamaican family on one side, a Jewish one on the other (“I went to my fair share of Bar Mitzvahs”), a family with an adopted Haitian kid and traditional Southern clans escaping the hustle of Miami, Diplo was introduced to different cultures at an early age.

That diversity made it natural for him to explore different sounds on local radio, where freestyle and Miami bass were two of the most influential genres. Meanwhile, dancehall was the soundtrack he’d hear at Jamaican parties and cookouts in the area. “I was interested in all kinds of music – metal, too – but I needed a band, whereas dancehall was something I could make by myself,” he explains. “I was really excited by Prince Jammy, who made ‘Under Me Sleng Teng’ and all those riddims. I wasn’t growing up when those were out, but they were regurgitated over and over again throughout the nineties. I was fascinated by how minimalistic it was.”

Few producers can boast a contact book as impressive as Diplo’s. Over the past decade, working with artists from M.I.A. to Snoop Dogg to Madonna, Usher and Beyoncé, he’s rightfully gained a reputation as a hitmaker who has shaped the pop landscape.

“After ‘Paper Planes’ I became ‘the guy that can do a radio record that’s weird’,” he says. “That became my calling card – but eventually the biggest songs I had were my own.”

His interest in exploring and fusing sounds helped spur the formation of Major Lazer back in 2008. Diplo and UK producer Dave Taylor, aka Switch, formed the group, while others like Jillionaire were frequent contributors. In 2011, Switch left of his own accord. At this point in Major Lazer’s existence, says Diplo, he was doing the majority of the work and Switch wasn’t as enthusiastic about the rigours of the road or the direction of the project. Even so, the duo remain on great terms, and are even partners in a freshly squeezed juice company.

After Switch left Major Lazer, Diplo brought in Jillionaire full time and Walshy Fire to replace Skerrit Bwoy as the group’s MC. The group’s sprint to the major leagues had begun. 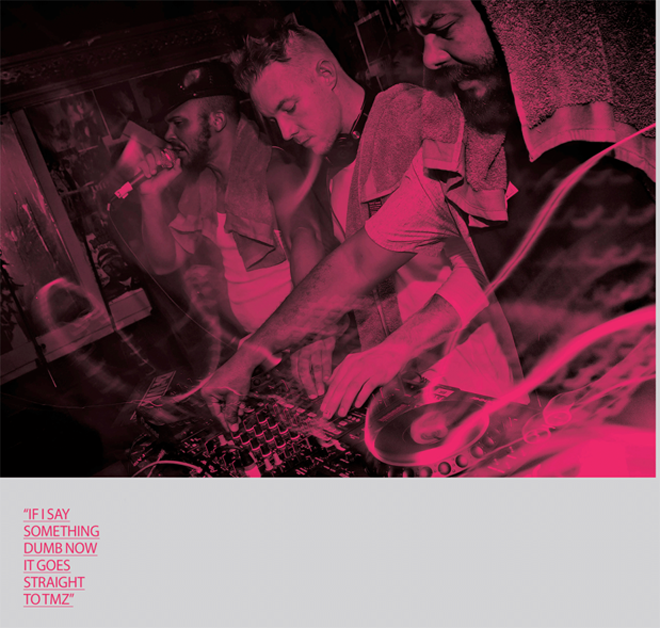 Walking into the plush suite at the posh Arizona Grand Hotel, Diplo apologises for being 45 minutes late. He says the delay was due to his working on a ‘Be Together’ video edit and the instrumental, which the group will perform live tomorrow with Wild Belle in LA.

Sporting a blue plaid shirt with a huge Lil Wayne patch on the back, black trousers and the early stages of a goatee, he makes his way to the table and flips through a local Arizona tourist magazine, in which he discovers a map of the greater Phoenix area. Staring at it intently, he starts calculating distances between the hotel, the venue and downtown Phoenix. He admits to being a fan of maps.

Diplo’s meticulous attention to detail — his band-mates say he watches the ticket sales for each Mad Decent Block Party like a stockbroker watches a ticker – and a rigorous work ethic are one part of his relentless productivity. There’s his production work, of course (he’s currently working on material for Sia) but also his vision for his Mad Decent label and all its many events, and other endeavours like the incredible Major Lazer cartoon. For the past few years, his unforgiving schedule has forced him to limit his work with Major Lazer. During the first sessions for ‘Peace Is The Mission’ a few years ago, he was pulled from the project to work with Madonna, Jessie J, Chris Brown, Mac Miller and Britney Spears, and began his Vegas DJ residency. 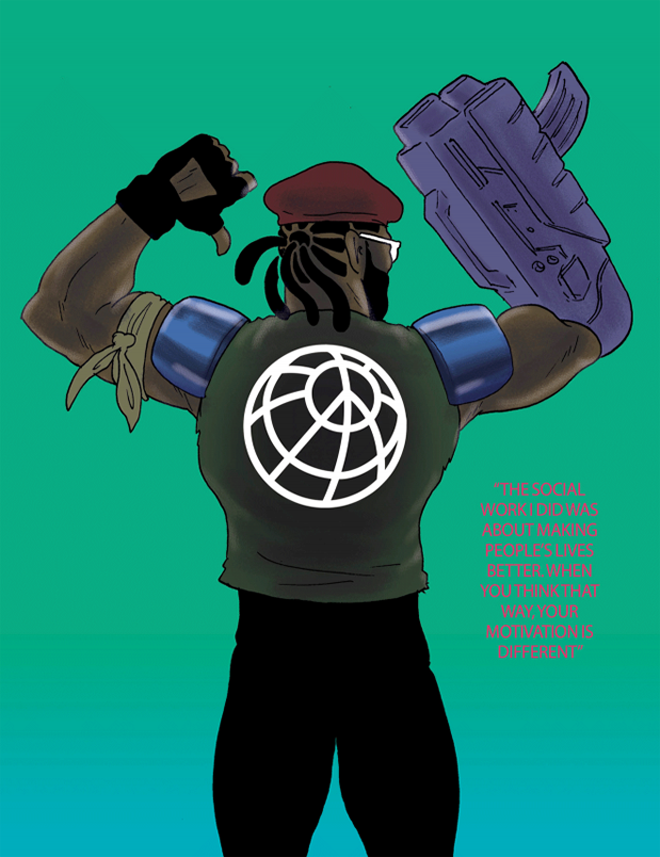 “I don’t have time to sit down and produce for a long period of time,” he says. But as Major Lazer continues to grow, Diplo has had no choice but to make it a priority above his other projects.

“I’ve seen us become big – well, we’re not that big, but I’ve seen our records become big,” he says. “Until now, Major Lazer was where we’d use the songs that we made that didn’t work out for other artists. But to see the records we have on this album go to pop radio made us realise we needed to concentrate on this project. I’m finally gaining a strong vision for it.
I didn’t think it would go as far as it’s gone.”

As his profile has grown, Diplo has worked hard to keep up with the demands of his schedule, and has pared down his social media presence too. He’s got in trouble in the past for everything from his use of background art to controversial comments about Taylor Swift and Caitlyn Jenner. “I’m so scared to say anything now,” he admits. “If I say something dumb, it goes right to TMZ or becomes a music media thing and people are up my ass for like a month. Snapchat is where you’ll find me acting like a dickhead because it’s me making fun of myself. We’re on the same level with those pop stars now so it’s hard to knock them.”

But there is another side to the brash Twitter personality. Before he became internationally known, Wes spent his afternoons working at an after-school program in inner city Philadelphia. Introduced by a friend who created the curriculum, he taught reading along with creative endeavors like making movies, screenplays, graffiti art and writing songs.

“I had so many jobs before I got involved in social work,” he says. “But every job I ever had before – working at Subway or tearing tickets – I felt like I was working for someone else to get richer. The social work was about making people’s lives better instead of making another old person rich. When you think that way, your motivation is different, and you want to do things to help people.

“I saw one of my students, who has to be twenty-something now, working as a doorman on Sunset by the Chateau Marmont in LA,” he tells us with a grin. “He said, ‘Mr Wes, Mr Wes!’ and told me he worked at this bar and told me he’d been following what I was doing. I couldn’t believe he made it out alive.” And a sense of social responsibility isn’t something Diplo’s left behind with his growing fame: his Heaps Decent charity supports disadvantaged Australian children.

His work with Skrillex as DJ supergroup Jack Ü has also had an impact on Diplo’s way of thinking. Seeing how efficiently Skrillex works, he says, and how unmoved he is by distractions, motivated him to keep up with his gruelling yet inspired work ethic.

Prior to Jack Ü, Skrillex was associated more with EDM than pop. Working with Diplo has introduced the producer to a wider audience. Their inclusion of Justin Bieber, and the subsequent success of ‘Where Are Ü Now’, became a hot topic not only among the duo’s loyal fan base, but among Beliebers too. Having worked with Bieber three years ago, when “he was a different person”, Diplo says the teen star has a new-found appreciation of music listeners after years of being a pop culture punch-bag. “Kaskade was playing in Vegas and dropped the remix he did of our song with Bieber,” he recalls. “He [Bieber] got on the stage and was almost crying, because he never saw adults cheer for him before.”

Not one to revel in the excesses of the industry, Diplo says he tries to look as far ahead as possible. He understands the success of ‘Lean On’ from a mainstream perspective, and knows that his success isn’t going to last forever. “I’m lucky that I make what I do, but I have children and I’m growing more motivated to stay at home and hang out with them. And Diplo’s favourite Major Lazer song – the haunting collaboration with Amber Coffman of Dirty Projectors on second album ‘Free The Universe’ – points to Major Lazer thriving in a post-EDM world. “‘Get Free’ is my favourite song we ever worked on. I hope more people hear it because of ‘Lean On’.”

The chants of “Major! La-zer!” get louder as set time nears. In the backstage area, Diplo and Walshy fire through a series of sit-ups and ab exercises before a meet-and-greet with local fans and press.

Following their usual pre-gig huddle, it’s go time. Treating the show like a carnival – Diplo fires T-shirts, confetti and other assortments into the crowd – the show is one of the best of the tour. Despite opening up a gash on his foot from surfing in San Diego earlier in the week, Walshy hops up and down on stage showing no signs of being injured. When’s he not manning the decks, Diplo jumps around hyping the crowd, and at one point, glides through them in his trademark inflatable ball. The LED screens and a mesmerising light show only add to the shock and awe. For 90 minutes in Phoenix, Major Lazer are on top of the world. They hold the sold-out, 12,000-strong crowd in the palm of their hand, bringing the night to a crescendo with ‘Lean On’. 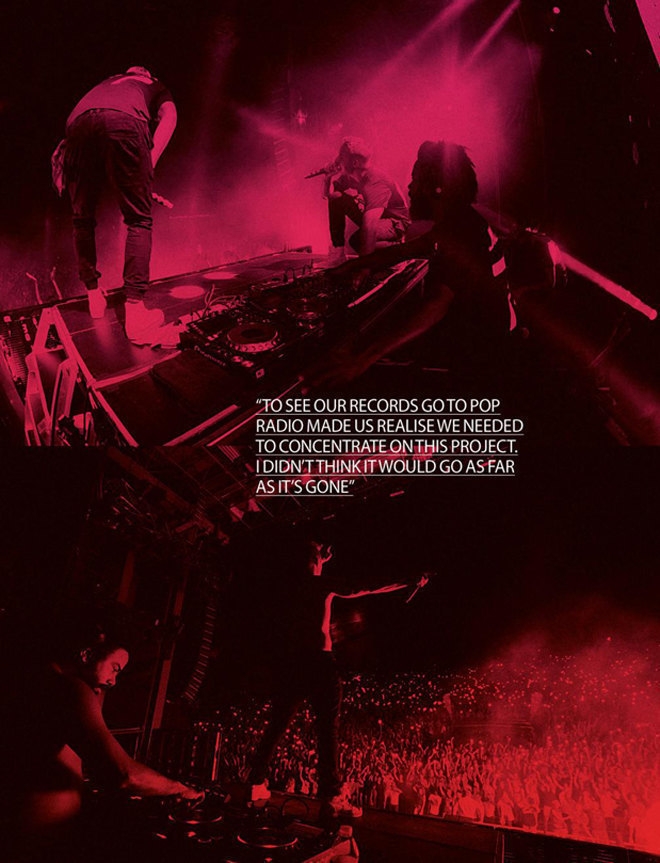 Eventually they’re whisked back to the restaurant, but Diplo isn’t ready to call it a night quite yet. He tells the dancers it’s time to rehearse for the next night’s ‘IHeartRadio’ show in Las Vegas. The pop radio event showcases the biggest names on radio over the past year, and Major Lazer have justifiably thrust themselves onto the line-up. The rest of the team trickle back to the hotel, but Diplo remains, giving instructions, even participating in the dance moves to ensure that everyone is on the same wavelength.

“We branded ourselves as a cartoon and I really thought that would work, but what people have really connected to is seeing the three of us in the ‘Lean On’ video,” he says. “I thought I knew one thing, but I didn’t, so it’s a continuous learning process. In a weird way, this feels like just the beginning.”