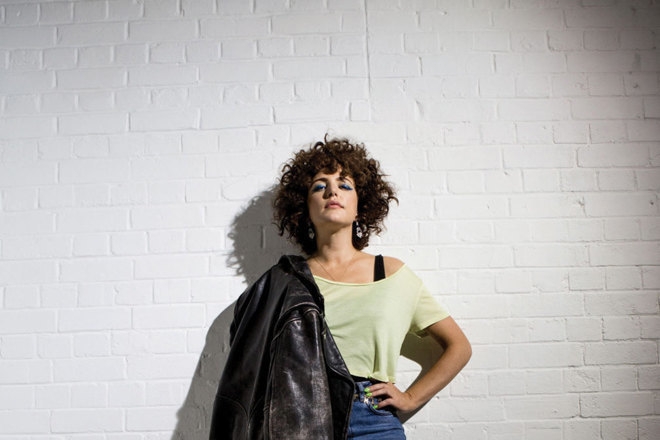 “I’ll never forgive you for using that picture!” shouts Annie Mac, in mock outrage. “I invitedMixmag round my flat and they used that

The photo in question is from Annie Mac’s first ever Mixmag feature, and shows the then 27-year-old DJ sitting on the floor of her South London flat wearing a black, low-neck jumper, all unruly dark curls and slightly quizzical expression. The year was 2006, and Mixmag was featuring Annie McManus for the first time. While her BBC Radio 1 show was fast becoming an essential weekly listen, her confidence as a club DJ was low.

“I was terrified to even dance in those days,” she laughs when we meet in a spare hour before her Friday night radio show. “When I first started to DJ, I’d write a list of all the records I was going to play and in which order I was going to play them!”

Ten years on, things have seriously stepped up a gear. In March last year she took over the weekday early evening slot on the station, (the most important and high-profile radio slot for new music in the UK), and last April she hosted the first edition of her Lost And Found festival in Malta. Her Annie Mac Presents club tour is perhaps the biggest in the country, and she’s become a festival headliner whose back-to-back set with Rob Da Bank on The Port stage at this year’s Bestival was the talk of the weekend. She might well be the single most important figure in dance music in the UK.

When we meet at the St George’s Hotel, opposite New Broadcasting House (‘the best/worst place in the world’, Annie calls it, referencing the hotel bar’s combination of an awe-inspiring panoramic view with a not-decorated-since-the-80s orange carpet) she’s in the middle of a particularly busy period. Having just taken over Zane Lowe’s Radio 1 slot on weekday evening, the night before we meet she hosted a Radio 1 special with Coldplay in Hackney – and she has two sold-out nights of her AMP tour at Brixton Academy to come at the weekend.

“I can deal with being this busy for a while,” she says, “if I know that on Monday it’s all going to calm down a bit.” While increasing your workload fourfold would pile on the pressure for most of us, Annie claims it has made her more relaxed, allowing her to shake off the kind of performance anxieties football players can suffer from when only getting one chance a week to shine.

“I love being on the radio every day – it’s something I’ve always wanted to do,” she says. “With the Friday show, I’d be building up to it all week, then if I messed something up I’d have a week to wait to rectify it.”

“I get to the end of the week now and I’ve got that Friday feeling in the sense that I’m fucking knackered,” she confides, emphasising her Dublin accent on the latter half of the sentence. “But I think that just means I’m more relaxed about it. At first I thought ‘God, I hope this isn’t going to be detrimental to the show’, but my producer actually thinks it’s the opposite. The more relaxed you are on the radio the better you are.”

That relaxed atmosphere is there when Mixmag sits in on the recording of her Friday night show a few hours later. Dressed in an orange sweater and grey pencil skirt with a pair of platform heels, Annie greets Mixmag and Sarah from her management team with warm hugs, before becoming agog at Sarah’s Adidas dress, made from what looks like wetsuit material. “I need a picture of that! Is this for Stormzy tonight?”

The atmosphere in the studio is convivial, Annie’s producer Clair bouncing around to every tune that comes on with a mile-wide grin, while one of the younger producers is gently berated for not knowing De’Lacy’s 90s house classic ‘Hideaway’, which Four Tet has just sampled. “You’re just too ,” Annie mockingly shouts. 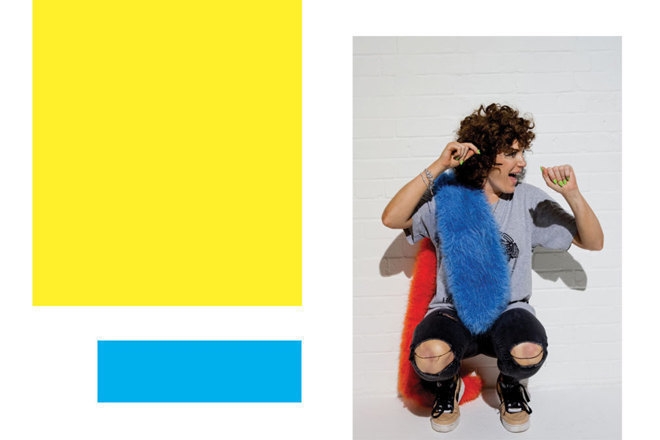 Everything from Bashmore’s dress sense (“Have you seen his steez? He’s wearing these wide jeans with a Fedora; he’s like the man from Del Monte!”) to Charlie Sloth’s trainer collection is discussed (he’s got 4,000 pairs, apparently), while Radio 1 staff clocking off for the weekend are seen off with hugs and invitations to that night’s Annie Mac Presents show. In fact, if it wasn’t for brief discussions with Clair about which minimix to play first or where certain records should be placed in the show, it would be easy to forget that she’s actually broadcasting to millions of people around the world, rather than warming up for the weekend with three mates in her kitchen.

Annie has that rare ability of great broadcasters to instantly put people at ease and make the biggest occasions feel intimate. Whether you’re listening to her show on the radio, going to her AMP events or buying her yearly compilations, she’s like the older sister you never had, who lets you in on her records and introduces you to her cooler mates.

As old pal (and DJ mentor) Erol Alkan puts it: “she’s charming, down to earth and incredibly real. That’s not something you can really fake.”

And while she’s played that role for countless music-hungry youngsters around the UK and beyond for nearly 10 years, she’s also done it for plenty of the artists who have come through in those years too. When asked who she’s most proud of introducing to a wider audience, Disclosure instantly spring to mind, as much for their savvy business sense as success in the studio.

“They opened up on the AMP tour three years ago, and I nurtured them in everything I do,” she says. “How they and their management have handled themselves since is fascinating. They run a festival, done three nights at Ally Pally, played Madison Square Gardens! That’s an insane success story, one I’ve been able to watch since the very beginning.”

She’s happy to ruminate on old pals who have graduated from the Annie Mac Presents tour (alumni include Rudimental and Hannah Wants), but her focus is mainly on finding new music. Each week, Annie’s SoundCloud features Free Music Mondays – a free track giveaway that’s a breeding-ground for new talent, and “great fun to A&R”. Tuesdays and Thursdays are ‘listening days’, when she spends the entire day in the run-up to her show going through promos and searching online for new stuff, and with her ability to use the three pillars of radio, club DJing and booking acts for her AMP tours and festivals, it’s possible that no-one in the country has a greater ability to break a new act.

Four hours later, Mixmag’s in South London for the first of two nights of Annie’s tour at the iconic Brixton Academy. The venue is packed with punters in their late teens and early 20s, with people who look over 30 about as scarce as Ten Walls tracks at G.A.Y. Mixmag makes its way to the green room to find a clique of female competition winners (all kitted out in Annie T-shirts and rain macs) here for a meet-and-greet with the woman herself. Stories are excitedly swapped concerning how many times each has seen her play, and one even says she’s thinking about getting an Annie logo tattoo. In the auditorium, while the tail end of Redlight’s set is well received and Stormzy’s half hour of power is undeniably rousing, the audience is clearly here for Annie. When she steps on stage at 1.30am for her peak-time headline slot, she’s alone, rather than in among a cadre of other DJs, as she was back in the early days of the tour. The instantly recognisable AMP logo flashes up on the screen, black cartoon curls embellished with either white swiggles or square blocks of primary colours. In stark contrast to many club nights in the Capital, there are more girls than guys in attendance, and the front few rows are about 95 per cent female. As soon as Annie’s set starts, girls pop up on shoulders and there are even a few crowd surfers tumbling over the Academy’s barriers. 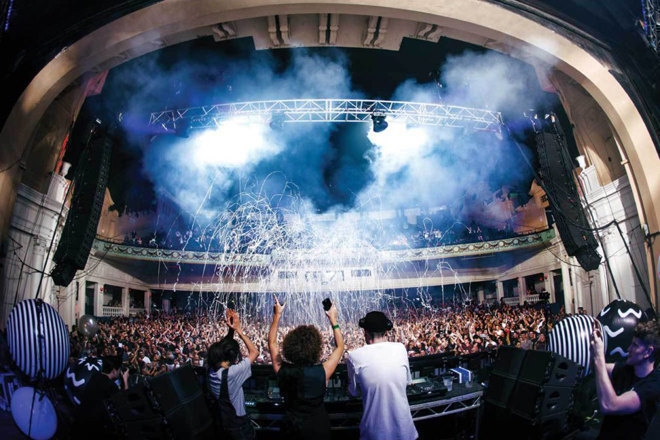 In stark contrast to the early days when Annie was full of trepidation and uncertainties as a club DJ, and the first few years of her tour when she was more curator than headliner, this is Annie as star attraction. She’s full of confident swagger, dancing between track selection and rousing the crowd with arm gestures: rock-star status with her name literally up in lights. Giant balloons are released into the crowd when she drops ‘Dancing (Again!)’ and when she finishes with Four Tet’s beyond epic remix of Eric Prydz’s ‘Opus’ she stands on the speakers to the left of her and jumps on the mic to thank the crowd, as pyrotechnics go off across the front of the stage.

While Annie’s clearly the main draw these days, that doesn’t mean she leaves the organisation of her AMP events to her team and simply attaches her name and turns up for her set. Last year’s Lost And Found festival in Malta was perhaps a three-day distillation of everything that the AMP tours represent.

“I have to micro-manage everything,” she explains. “At the festival, things like making sure there are enough transfer buses are really important to me. You don’t want people waiting for a bus for two hours.” Annie’s stamp was all over Lost And Found, from the emojis on the toilet doors to the neon cocktail glasses either side of the Annie-designed main stage. And then of course there’s the programming, with Annie keen to make sure the sense of inclusivity she brings to the radio and her DJ sets extends to her tours and festivals. “Keeping it broad in terms of electronic music and making sure there was something everyone wanted to see was important,” she begins. “Things like taking into account that people from the North might be into different stuff to people in London, and making sure it reflected all of the UK was essential.”

But that doesn’t mean she spent all her time sorting airport transfers and making sure there was enough bog roll in the toilets. One of the highlights was the Annie Mac boat party where she exuded such levels of nonchalant cool that she DJed wearing a bath robe, à la P Diddy at an Ibizan yacht party.

As for the future, while she’s unsure if she’ll follow in ex-workmate Zane Lowe’s footsteps and tackle things on an increasingly global scale (“it all feels a bit far away when you have a family and roots”) she’s certainly not lacking things to do in 2016. In March there’s the second edition of her Lost And Found festival, and she’s launching a new concept called The High Five tour, where she’ll play all night at small, sweaty basement venues to a few hundred people, with tickets costing just five pounds each – a counterpoint to her role as a main-stage mainstay. Meanwhile, February 4 and March 10 will see her AMP Collected second series at the ICA, showcasing fresh new talent including 16-year-old folk prodigy Billie Marten and acoustic-electronic hybrid A.O.S.O.O.N.

It’s all a far cry from the Annie who Mixmag met in 2006, who had just started a two-hour weekly radio show and was struggling to find things to fill the rest of her time. Does she even get the time to go out clubbing any more?

“Not often, but when I do I find it exciting,” she laughs. “I went to XOYO a few weeks ago to see Busy P. I was in town having dinner and thought, ‘Fuck it, I’ve got a babysitter, I’m going. I walked in and he was playing ‘Runaway’ by Nuyorican Soul. I was in heaven!”

Annie Mac. Global brand, evangelist for new music and talent, superstar DJ, festival supremo: but still, most importantly, the girl on the dancefloor.