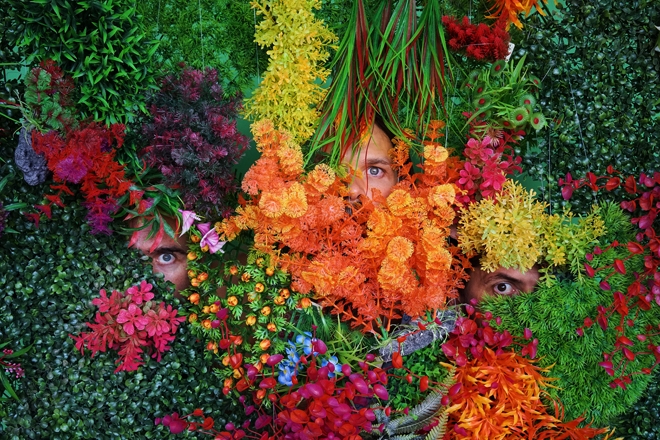 Deep in Hong Kong, “surrounded by the smell of dried fish, the throb of heavy machinery, and the humidity of the South China Sea,” brews a heady fusion of tribal rhythms, electro-psychedelia, and afrobeat.

Blood Wine or Honey’s description of their creative environment (above) reads like an ode to their beloved city of residence — and rightly so. Hong Kong’s myriad juxtapositions, from its mountains to skyscrapers, are a heavy influence on the group’s organic sound, which is fast gaining global acclaim.

Less than a year since their debut single ‘The Forest is Expecting You,’ BWOH already counts Brownswood boss Gilles Peterson and Tru Thoughts founder Robert Luis as fans. In February, Gilles named the song ‘Anxious Party People’ (from the upcoming EP of the same name) as the top monthly pick for his radio platform Worldwide FM while NTS, Juice FM, Radar Radio and BBC Radio 6, among others, have also shown support.

For a first taste of fame, that’s well above average.

BWOH are Shane Aspegren, Joseph von Hess and James Banbury. Each is a vocalist and multi-instrumentalist — Shane is on drums, electronics, and synths; James takes on keyboard, bass and cello while Joseph plays the sax, winds, percussion and “whatever makes a good noise.”

“We played more conventional instruments then altered the sounds as to be totally unrecognizable, or so they resembled something else entirely,” explains Joseph.

The end result feels ritualistic and a tad surreal, probably because it’s tough to pinpoint a specific genre. Parts of ‘The Forest is Expecting You’ channels free-spirited jazz while ‘The Young Ones’ reveals a more experimental side. Meanwhile, Factory Floor’s remix of ‘Anxious Party People’ shows just how seamlessly BWOH translates into club-friendly fare.

“It’s all stealth pop. On the surface, it’s skittish and manic; below it’s calm, purposeful and subversive,” describes James.

Whatever you want to call it, it makes for one hell of a show. Earlier this month, BWOH killed with an energetic performance at Sonar’s debut Hong Kong edition.

“Having Sonar as a first live show was a great motivator to transform everything out of the studio into a live setting,” says Shane. “We were playing the main stage pretty early in the day so we were a bit scared that it would be completely empty, but in the end it was a wonderful place to lose our virginity as a live band.”

The trio met in Hong Kong a few years ago after moving to the city with their respective families and quickly recognized similar sensibilities in one another that enabled a freeform work process.

“Most of our tracks developed from recording extended improv sessions and then extracting elements from that as a starting point. Up to this point, we have written as a band, using our various journals/scribbles, then combining and editing until things take on their own life form,” explains Shane.

Extensive musical backgrounds didn’t hurt either — James was a cellist and keyboard player for The Auteurs, Richard Ashcroft and Talvin Singh; Shane toured globally as part of indie band The Berg Sans Nipple and boasts various solo projects, including Pando’s People; Joseph DJ’d in his native UK and is a clarinetist for gypsy jazz duo Head Clowns.

“I see Hong Kong as a lurid, tripped-out, over-saturated LED-lit melange, with beautiful disparate souls clinging on for dear life as the storm of ‘progress’ accelerates beyond all expectation or understanding… something like that anyway! I don’t know if that comes through in the music but it’s what I feel sometimes when making it,” remarks Joseph.

Having created their own label, Plastic Pagan, to release their first 12” (the Anxious Party People EP, due April 28), the ensemble is currently working on a more longer-term situation as their ascent to fame continues — they already have inquiries from promoters in the EU/UK and are currently sorting out booking agents.

So what’s next? “A couple more 12”s perhaps, live shows, festivals, then an album. We’re in this for the long haul,” says James.