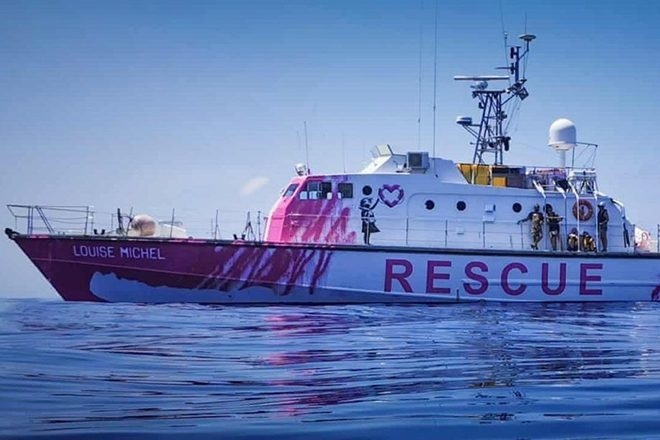 Banksy has financed a refugee rescue boat in the Mediterranean sea.

The street artist's bright pink boat - a 31-metre yacht - is there to rescue refugees making their way from North Africa to Europe. On Thursday, it rescued 89 people, according to the Guardian.

As well as being adorned in bright pink paint with the words 'rescue' on the side, Banksy's Girl With Balloon artwork is on the side, only she's holding a heart-shaped life ring, rather than a balloon.

Named after French feminist anarchist Louise Michel, the vessel secretly set off from Valencia on August 18 to head to the central Mediterranean. Anyone rescued by the boat will be taken to a safe seaport or be transferred to a European coastguard vessel. The crew consists of European activists with previous experience in search and rescue operations.

Human rights activist Pia Klemp, who's also a former captain of NGO boats, is involved in the operation. Banksy wrote to her in 2019 explaining that'd he'd like to give her funding after selling some work reflecting the migrant crisis.

He wrote: “Hello Pia, I’ve read about your story in the papers. You sound like a badass,” he wrote. “I am an artist from the UK and I’ve made some work about the migrant crisis, obviously I can’t keep the money. Could you use it to buy a new boat or something? Please let me know. Well done. Banksy.”

Pia told the Guardian: “Banksy won’t pretend that he knows better than us how to run a ship, and we won’t pretend to be artists. I don’t see sea rescue as a humanitarian action, but as part of an anti-fascist fight."

Pia also hopes the speed of the boat - which can reach up to 27 knots - will be able to beat the Libyan coastguard to refugees and migrants, in order to stop them being taken back to detention camps in Libya.