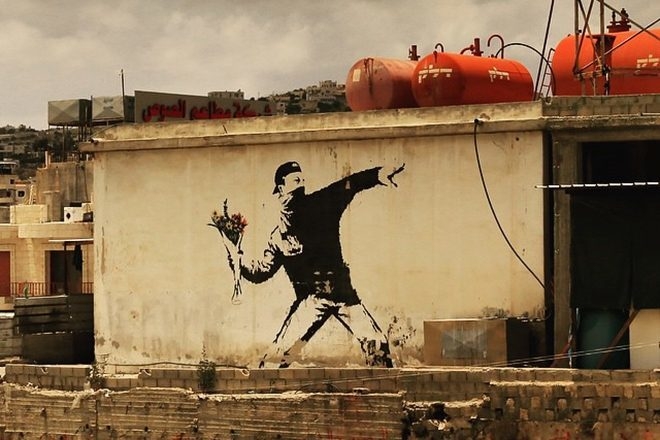 Banksy has lost the copyright to the Flower Thrower artwork he painted on the walls of the West Bank in Jerusalem.

The anonymous street artist successfully applied for an EU trademark for the artwork in 2014, and has been battling the UK card company Full Colour Black in court for two years for using the artwork on its cards.

The court battle prompted him to opening a pop-up shop in 2019. At the time he said: “A greetings card company is contesting the trademark I hold to my art and attempting to take custody of my name so they can sell their fake Banksy merchandise legally”, adding that he opened the shop “for the sole purpose of fulfilling trademark categories”.

In 2006 book Wall and Piece, Banksy claimed "copyright was for losers", promising to never commercially sell his works and making his artwork freely downloadable.

Banksy has now lost the court battle, after judges at the European Union Intellectual Property Office ruled he cannot claim an EU trademark because "he cannot be identified as the unquestionable owner of such works as his identity is hidden".

The judges argued that Banksy choosing to paint the art on public property and previously expressing a disinterest in copyright were factors in the decision., saying that his plans to “circumnavigate the law” in lieu of commercialising his art was in bad faith.

The European Union Intellectual Property Office judges panel said: "Banksy has chosen to remain anonymous and for the most part to paint graffiti on other people's property without their permission rather than to paint it on canvases or his own property.

"He has also chosen to be very vocal regarding his disdain for intellectual property rights.

"It must be pointed out that another factor worthy of consideration is that he cannot be identified as the unquestionable owner of such works as his identity is hidden; it further cannot be established without question that the artist holds any copyrights to graffiti."