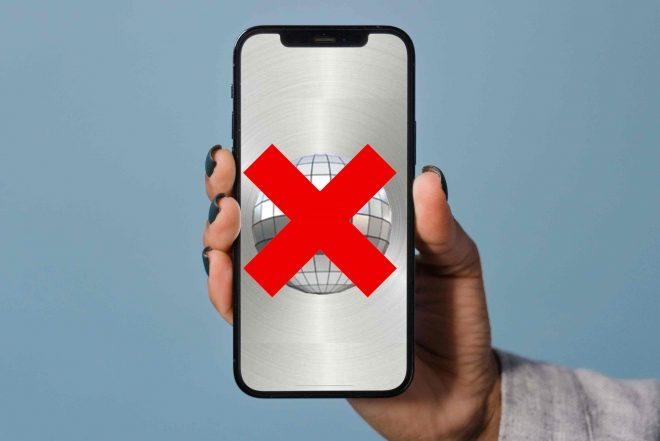 The dance music world has been left shaking, crying and throwing up as Apple has removed the disco ball emoji from the iOS 15.4 beta.

The emoji was sought after for years, with Glitterbox launching a petition demanding its creation in early 2019, before it was confirmed to be in the works in July last year.

After appearing in Emoji 14.0 update, the coveted mobile disco ball finally dropped on Apple devices last month to the delight of iPhone users who enjoy blinding DJs by filming with their flash on in the rave.

Read this next: 30 photos that prove disco balls rule the world

But now Apple has removed its availability, saying the demand for use of the disco ball emoji was crashing servers and disrupting the beta testing period of its new iOS update.

“People just wouldn’t stop using it, even when it was completely devoid of context,” said Apple’s CEO (Chief Emoji Officer) Emmet E. Conn wearily on a guest appearance on the Japanese Wingdings podcast. “People were obsessed. I even saw someone send a ‘u up?’ booty call with a disco ball emoji attached — that’s surely an Eggplant or Smirking Face situation? Our servers couldn’t handle it, and in a crucial stage of the new IOS rollout, we had to shelve it.”

Read this next: Apple has finally dropped a disco ball emoji

When asked if a multi-trillion dollar company was embarrassed that its tech was being overloaded by the use of a single emoji, Conn admitted that it was “difficult to look in the mirror - or multiple tiny mirrors in this cases - and shut down something people loved.”

But becoming more bullish, he hit out at the “rave gremlins whose disco ball obsession used enough server electricity to power the pyrotechnics and light shows of Ultra, Electric Daisy Carnival and Tomorrowland for a millennium”.

He added that if Apple were to bring it back, they “might start with a cheeky half disco ball emoji” to ease them back in rather than drop a full one.

Apple users may still find the disco ball present among their emoji options for now, but pending updates are set to wipe it from the keyboard.

We guest it’s true what they say: the emoji that shines twice as bright, glitters half as long.