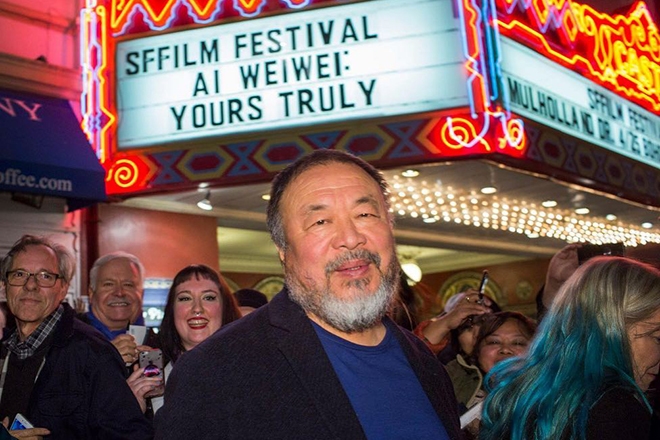 Dissident artist Ai Weiwei is widely known for his work as a Chinese contemporary artist, active in sculpture, installation, architecture, curating, photography and film that is social, political and cultural. Most importantly, his work as an activist is apparent in all his art forms with underlying themes in democracy and human rights. Now, that same fire is captured on film in a feature-length documentary called Ai Weiwei: Yours Truly.

The documentary begins with a story about how, while exiled as a dissident poet in the 50s, his father received a single anonymous postcard which went on to have a profound impact on both father and son. He goes on to divulge candid details surrounding his childhood, including years of privation on the edge of the Gobi Desert.

These years along with the 81 days he spent under house arrest in Beijing in 2011 became the inspiration for a revolutionary exhibition called @Large: Ai Weiwei on Alcatraz. The exhibition saw the outspoken artist transform Alcatraz into a powerful expression of socially engaged art, which featured portraits made from LEGO bricks of prisoners of conscience from around the world.

“Not all inmates in prison have committed crimes. Many people are in prison because they want to change society,” Ai says in the new documentary. “I have an obligation to speak on their behalf.” Later on, he adds, “I think the act of art is always involved with danger.”

The exhibition, which attracted over 900,000 visitors, was organized in 2014 by Cheryl Haines, a hugely influential voice in contemporary art as well as the director of Ai Weiwei: Yours Truly. She further takes the from Alcatraz to Bahrain, Washington D.C., Cairo and beyond, as “former prisoners of conscience, and the families of those still detained, reveal the comfort they found in messages from people they would never meet”.

Interestingly, WeiWei was never able to visit the exhibition himself since the Chinese government had confiscated his passport and he couldn't travel to the former island penitentiary. He got it back in 2015, just after the Alcatraz exhibition closed. At least he can explore the exhibtion via the doc, like us.

Ai Weiwei: Yours Truly is now screening virtually across the US & Canada. Here’s to hoping we can watch it in Asia soon. But for now, watch the trailer below.