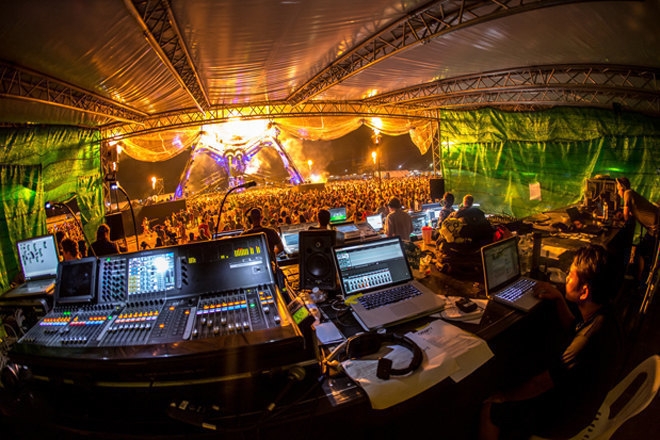 Preparations for Arcadia have begun and if you drop by Lumpini Square in Bangkok this week, you will likely catch the assembly of its 50-tonne mechanical spider. There are some impressive facts behind transporting and assembling the beast all over the world and we thought it would be interesting to share some of them so when you’re standing underneath it next week, you’ll know just what it took to get it there. We talked to the whole team over at Arcadia and they were eager to share their knowledge and excitement for the upcoming show.

“We love Bangkok, and having found it the best place in the world to party all night long we felt it needed a giant spider and some fireballs to add to the mix. We’ve also traveled extensively in Thailand over the years and found a real warmth, magic and openness to the Thai people, and their welcome last year was overwhelming. In the final days before [last year’s] event, as we were rehearsing local families from the surrounding neighborhoods all came down for a look, and it was very special meeting people who wouldn’t be at the event itself, and seeing their reaction to the huge mechanical spider in their midst.”

The always impressive line-up will see DVBBS, Kaskade, DJ BL3ND, Must Die and Zomboy see climb up the spider and into its DJ booth that is suspended over the crowd.

This year’s event takes place on the 23rd of January and tickets can be purchased from ThaiTicketMajor here for 2,500BAHT. Capacity at Lumpini Square, which will provide a spectaclur backdrop of Bangkok’s skyline, is 15,000 and doors are at 5pm.

For the best up-to-date information, follow Gravity Thailand below.

1. It takes 10 days to assemble the spider and prepare the grounds

“It took years to build and refine the Spider, and weeks to ship her halfway around the world, but once we land on Thai soil, it will take between a week and 10 days to transform Lumpini Square at the centre of Bangkok into party central.” 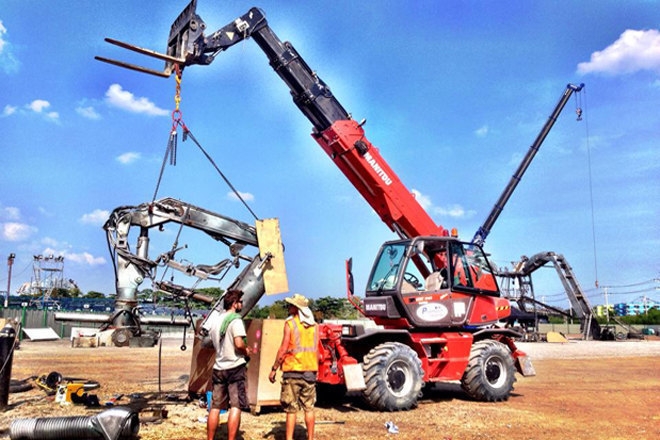 2. It takes exactly one year of preparation

“Planning begun on the last day of the 2014 Gravity event. It had been such a success and we had worked together with Gravity so organically that we all knew we had to make it happen again. Everything from site plans, shipping timetables, safety questions, technical sourcing, potential sound levels, safety protocols etc have to be worked out well in advance to even commit to the location, let alone start booking artists.” 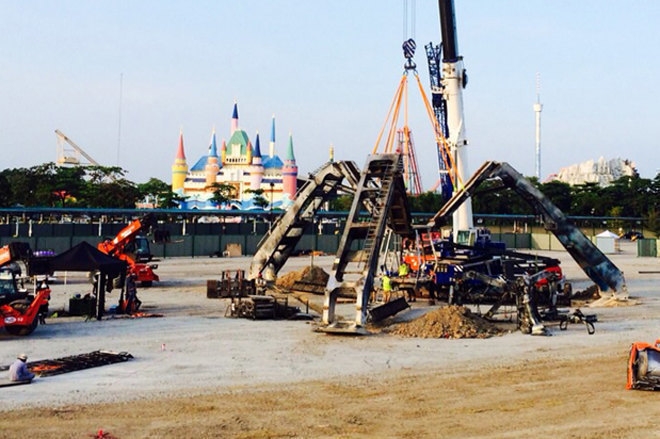 3. The spider weighs as much as six elephants 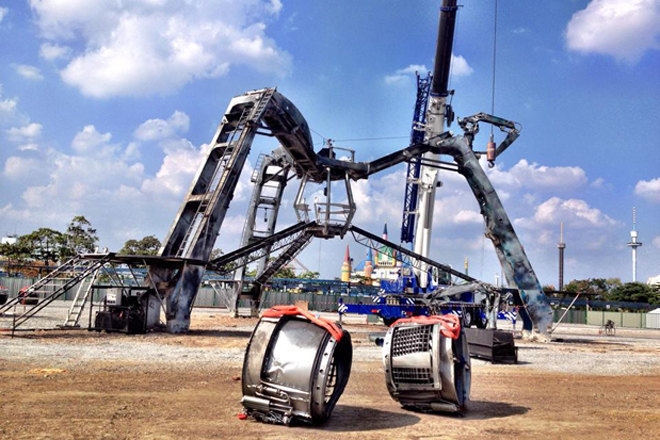 4. It takes almost two months to ship the spider to Thailand

“It takes about 45 days to ship from the UK to Thailand, though as we do more international shows without returning to the UK first, the logistics have gone up a gear.” 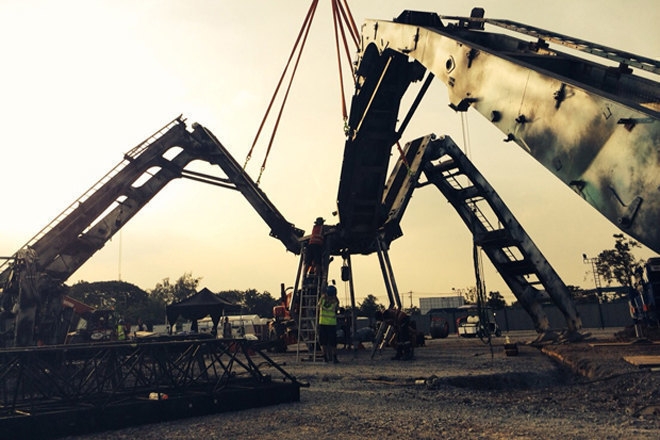 5. It takes an impressive 50 people to operate

“It takes 50 people from across an amazing spectrum of disciplines from crane drivers, to pyrotechnic experts to welders to technicians to engineers.” 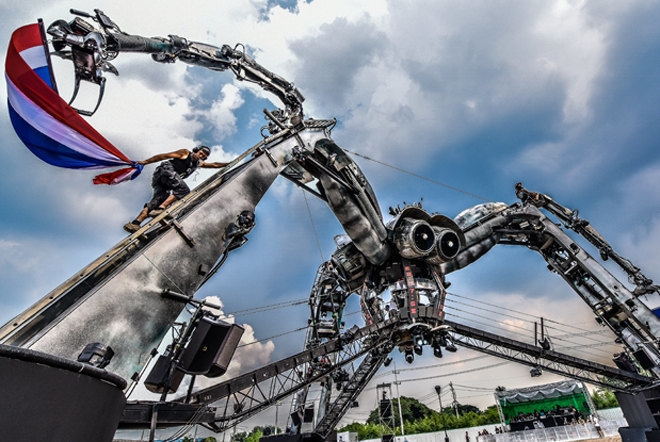 6. The best spot for audiophiles is directly under the spider

“The sound is loaded in two circles. An outer 360-degree ring of Ambisonic speaker stacks creates an inward facing sound field and a potent ring around the Spider with a diameter of 80 meters. From outside that circle, you don’t hear much, but step inside and it suddenly comes vividly alive. Then, for the true hardcore, directly under the spider there are further stacks on each of the three legs angled inwards to create a second, more concentrated sweet spot under the DJ booth. The total power comes to around 200 KW.” 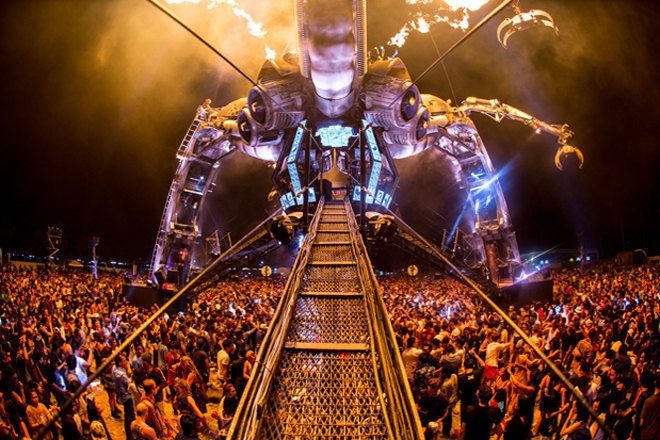 7. Many of the spider's effects aren't even available in Thailand

“Shipping over electronic effects not yet available in Thailand. It’s too late to figure that kind of thing out on arrival, so we have to have worked out every last detail months before, so we know we have everything we need. Anticipating the most mundane detail in advance is critical.” 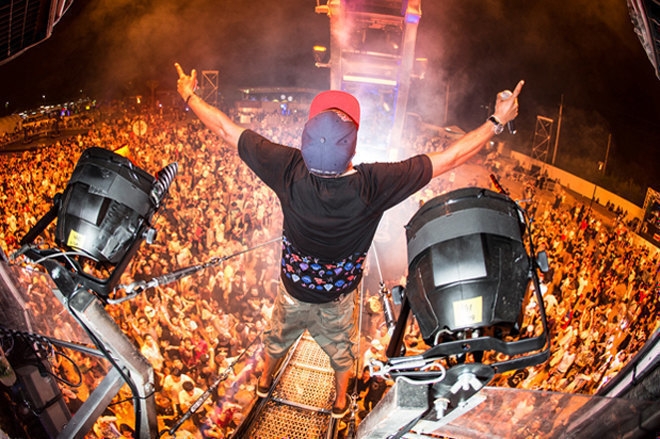 8. The hardest part has been finding enough CO2 in Thailand

“Sourcing enough C02 & gas cylinders to run the cryo system on the spider. We’re now confident that we’ve have found enough now but they are coming from all over the city!” 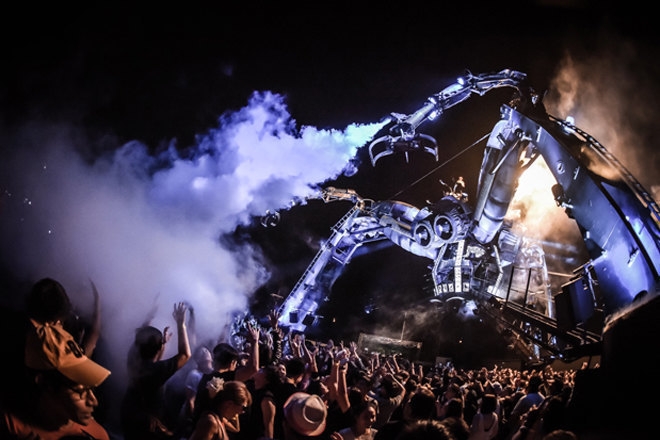 9. The spider's legs are made from scanning machines

“Every piece of the spider has a story and an individual history, which is the beauty of using recycled materials. A real game changer for us were the three main spider legs which are made from Customs and Excise scanning machines, and were used in ports in Europe to scan shipping containers and trucks. They weigh 10 tons each and just fit into a shipping container to travel between shows.”

10. Every single piece on the spider is irreplaceable

“A huge worry for any international show is something going missing in transit. If a container is incorrectly logged and gets lost amongst thousands of others, it’s a huge risk for us as most of the Spider is almost impossible to replace. That’s the one drawback with using random finds and recycled materials, if you lose a piece, finding that exact model number from a 1983 spy plane or whatever can take months – you can’t just order things in to spec!” 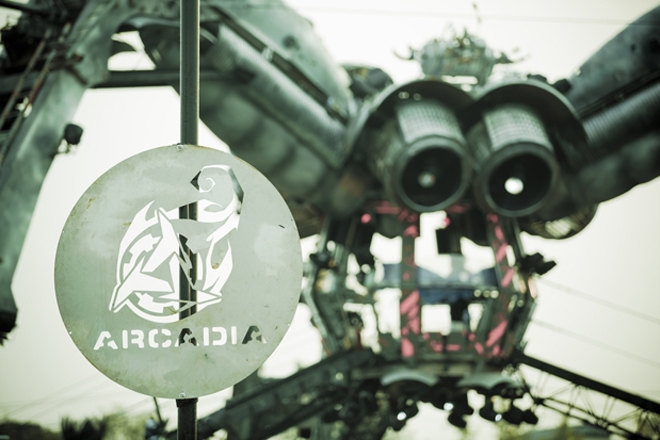