Seemingly fed up, on Saturday OMNI in Taipei posted to their Facebook and Instagram that bounce music was to be banned from the club effective immediately after observing that too many times, a couple of big spenders had requested it and management complied. But when club owners caught wind, they decided their integrity as an international club was more important.

A translated excerpt from the post reads: “To fully implement the original intentions and commitments of international conformity, theLOOP Group's new music policy will ban all types of Tuhai and bounce music from OMNI to maintain consistent music quality, with immediate effect.”

Tuhai is a colloquial term for bounce music. Tu translates literally to old fashioned, but in a cringe kind of way, and hai translates to high…as in to get high. If you look it up online, the genre is said to be inspired by 70s and 80s Italo disco as well as Eurodance for its same 4/4 rhythms and repetitive melodies. “To put it nicely, it’s got a nostalgic sonic quality,” explains a YouTube video dissecting the style, “and to put it more bluntly, it's just got a shit sonic quality.” When it's played in clubs, it’s usually accompanied by lots and lots of whistles. And after hearing whistles blowing in their state-of-the-art club, OMNI put their foot down. Well, more like stomped.

The statement went on to say that whistles were also being banned from the venue, saying that anyone caught blowing a whistle would be removed from the venue. While whistles play an integral role in rave culture, there is a time and place — and the relationship between whistles and bounce music was just too much for OMNI.

The Facebook post received 3k likes, 344 shares and 476 comments, and Instagram over 5k likes and almost 300 comments, with nearly all in support of the club's move. See the full statement below. 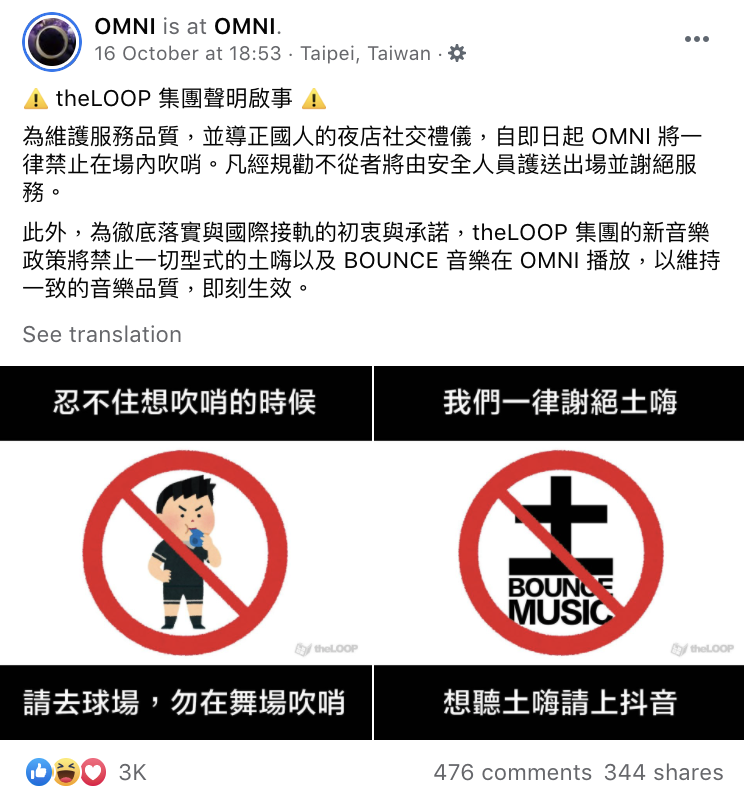 Bounce music, in its Chinese strain, is an evolution of Tuhai and sounds like Eurodance but sped up and with mashups layered over top for an altogether low-grade childlike sound. The EDM offshoot is further characterised by overly repetitive basic beats and cheap production value. It was popularised in Korea before being imported to China a couple of years ago and blowing up on Douyin, China’s version of TikTok. This gave rise to KOL-cum-DJs with millions of followers on social media for the simplicity in playing the genre, and suddenly, a new breed of “DJs” was born in China. The pandemic then extrapolated the trend with Chinese DJ Carta saying that the bounce "virus” has now taken over China’s stages.

Just how bad has it gotten?

“Right now, the legitimate EDM stuff has about a 10% market share,” Carta said to Mixmag Asia. “Bounce has about 90%.”

“Every other day there seems to be a new “DJ” with a boob job that pops up outta nowhere,” he added. “And the promoters are loving it because they can then book a DJ who already has millions of followers, which they assume will then organically promote the shows they booked. The thing is, the online to offline ratio is completely off. These Douyin users aren’t necessarily ravers who go to clubs, they are typically from futher afield and prefer to be on their phones all the time, interacting from a distance. They prefer to live in an online world. There have been several instances where festivals have booked a Douyin DJ with millions of followers but only a handful of people actually showed up.”

Clubs, however, are going off. Carta explained that while the trend has existed in China’s fourth and fifth-tier cities for a while now, the pandemic has left first-tier cities in need of acts to book since internationals DJs still can’t enter the country. So these TikTok DJs are now playing 20-30 shows a month in first-tier cities and while the entire world is trying to save music culture in the face of the pandemic, China is fighting a new kind of infection — the sudden new wave of bounce music that’s infiltrated its clubs.

In response to this, Carta — who is labelled as China’s #1 DJ by Pyro, China’s version of DJ Mag’s Top 100 list — created the Chinese Bounce Mafia together with Unity, who is signed to Laidback Luke’s Mixmash Records and Luminn, a trance DJ from China under Armada Music. Except rather than promoting the genre, the intention is to poke fun at it, essentially parodying the entire TikTok-fueled genre. 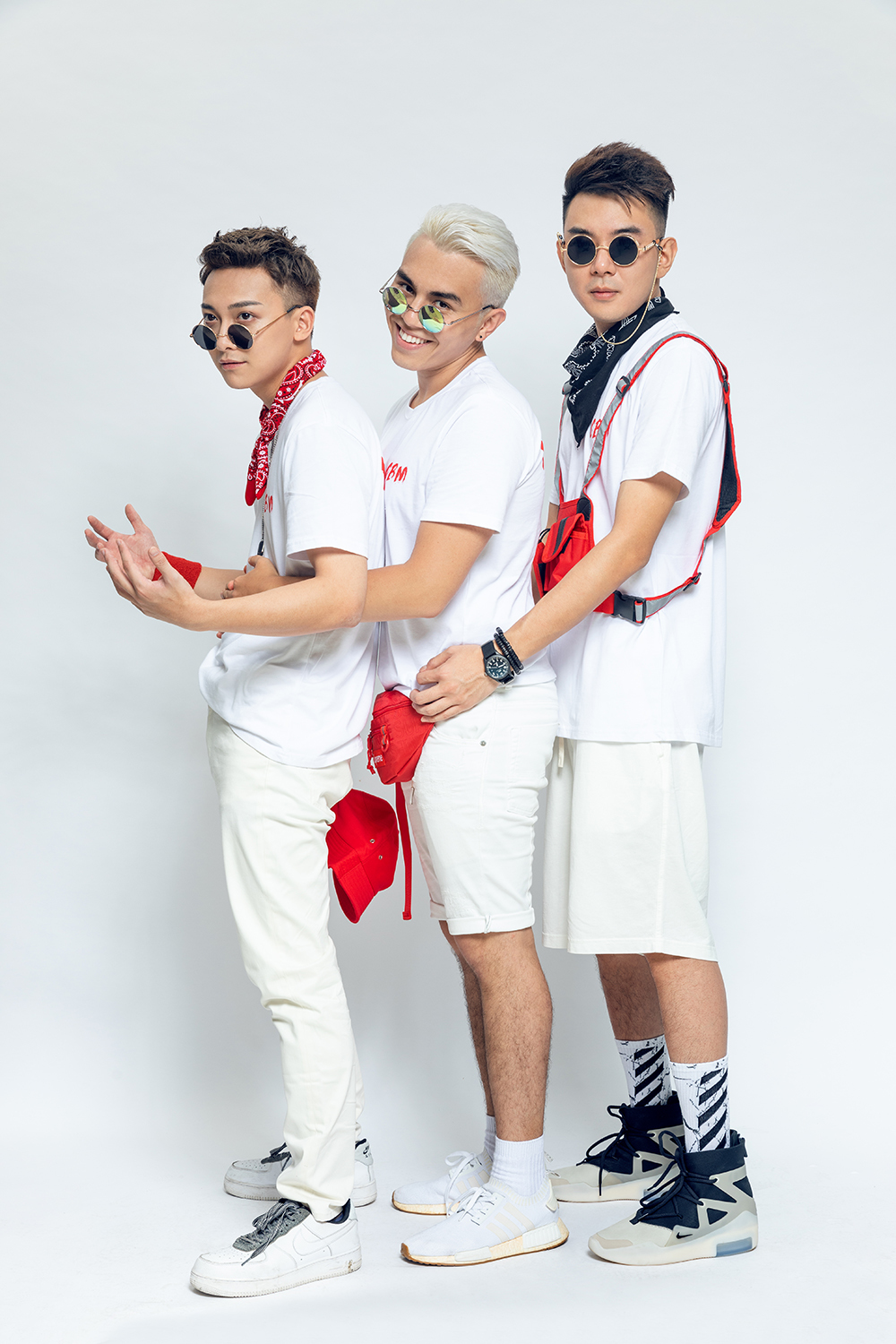 “We started Chinese Bounce Mafia after seeing the number of shows these guys were doing and what was happening to the market. We all hated the music, so we said ‘fuck these guys, if they can get all these shows, so can we’. So Chinese Bounce Mafia is our stand against what we see as a problem within the market. The name is a troll because people thought we’ve all sold out and given into bounce but we actually play anything from house to trance to big room to techno.”

“We might call it Chinese Bounce Mafia, but we do the exact opposite.”

Proof lies in videos circulating online that show clips of the three DJs playing bounce music while shaking their heads with hands over their ears. 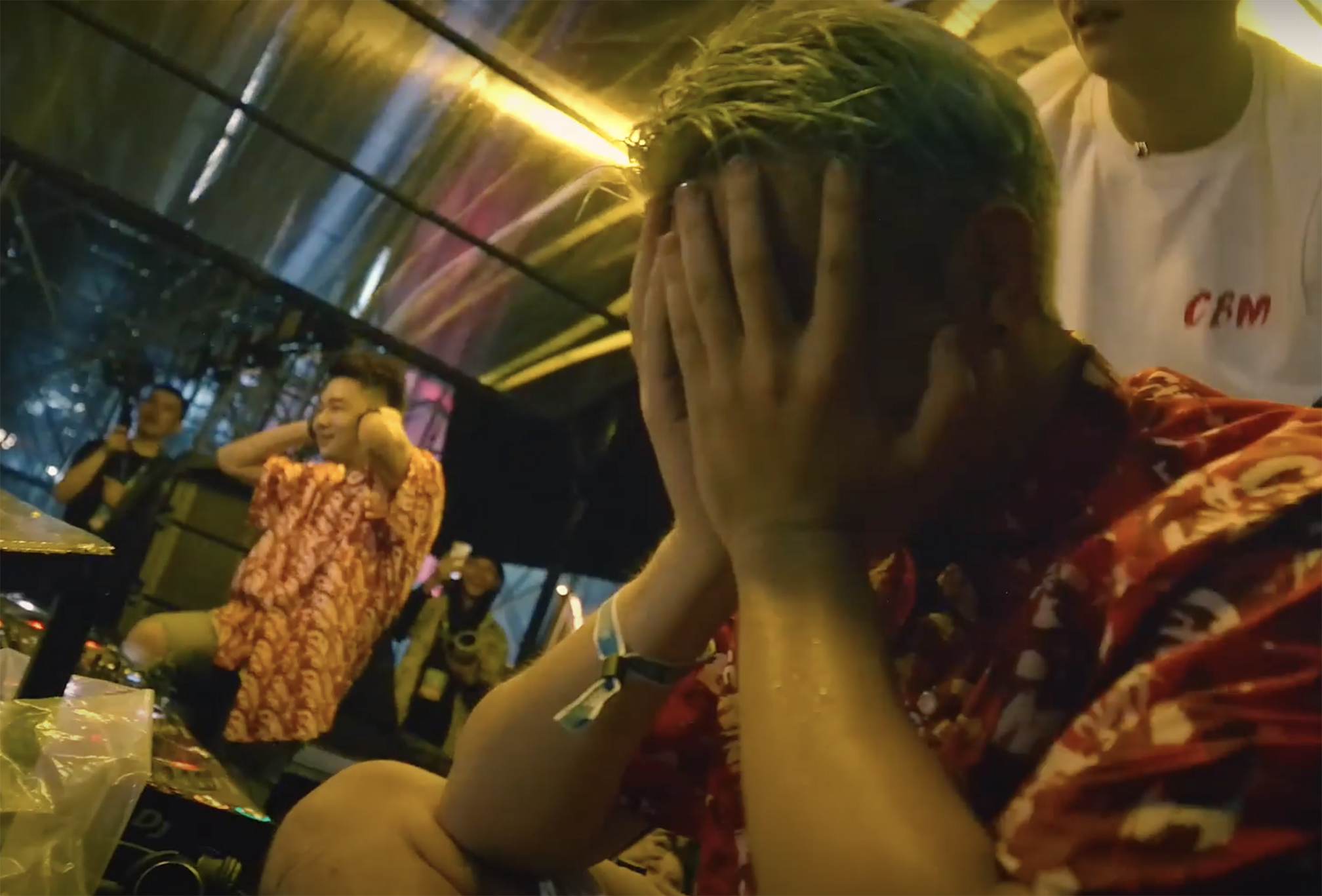 Actually, Carta says those clips are part of a planned storytelling-style intro they do at the beginning of their sets. They start with a pre-made five-minute intro of all the biggest bounce songs in China right now. They get on their mics and ask the crowd ‘Who the fuck makes this?’ before another responds with ‘Not me’ while looking at each other and shrugging. "Then we tell them we’re going to play something real for them and go into our usual sets.”

Carta believes that because all three DJs make a lot of noise in China, by joining forces, they can try to fix what is happening.

And, hopefully, stop it before it spreads anywhere else in Asia.